No luck with plums

I have my third plum tree in the ground now on 5th leaf - Mt. Royal. Before it I had Green Gage for 8 years and no flowers. Before it it was Stanley, that flowered ones and died of root rot. I understand why plum can get sick and die, flower but not set. But I don’t understand why it is not flowering. Last year it was about 40 flowers on whole tree, about 20 plum set, ONE got to the ripe point. This year there probably were 150 flowers on a large tree, mostly on lower branches, and may be just 20-25 plums set. I can grow peach in 10 foot proximity with no problem. I don’t think flower buds have been damaged by weather, as peach and even apricot flowered fine, and Mt Royal flowers late. Is there any trick I am missing with plums, or they just don’t like my soil, location or - may be they just plainly don’t like me

European plums eg. Green gage flower very little for me and It’s a teenager. Japanese plums flower profusely and our zapped by the cold every year. Plums can be difficult to grow because not every location is conducive to grow them.

I’ve found that even they say a plum tree is self fertile like Mt. Royal, it’s better when it has another compatible plum to cross pollinate. Does your tree get full sun? If not, that’s another issue, too.

Like other fruit trees, full sun seem to do them very good. My E plums are in full sun, 9 am - 8 pm (in the summer). They have flowered and set fruit sooner (3rd year) than what I’ve heard from others.

One thing I forgot to point out or ask which should have been the first thing I asked is what type of rootstock are you using? Remember 99% of the time when someone has issues the rootstock is the culprit. My green gage is standard rootstock but there are many better options. Tippy @mamuang is using an improved rootstock to get such early yields.

It is Mariana gf8

Looks like I have to cut last one of my big trees… Oh, well… That ment to be answer to shade question)

I agree they definitely prefer full sun for early fruiting. I am only recently getting regular setting on all my mature Euro plums and they are 15 years old - ! Most only get about six hours of sun per day, the ones with more fruited earlier. It also varies a lot by variety, Middleburg and French Prune are much more precocious than the other ones I grow. Purple Gage was the slowest, I finally gave up on it even though it had finally started to bloom a bit.

For me the late fruiting is #1 of the triple whammy bad of Euro plums. #2 is the curculio’s love for them, well beyond how much they like my Japanese plums. I lose about half to curc in a good year. Then, the grand finale #3 is how much they rot. They also get black knot badly, but that is not nearly as bad as the previous three. Lack of sun also makes the rot, knot, and curc problems worse, my plums in more sun are not nearly as bad on any of these. The rot is the only thing that is a big problem with the plums in more sun.

This year the curc is mostly finished and I have good set on all my mature Euros: French, Pearl, Golden Transparent Gage, Middleburg, Bavays, Coes, and Reine des Mirabelles. Heres hoping I keep the rot under control!

I have a ton of black knot issues on my plums and they get 10 hours of sun. Wish I knew were this crap was coming from. Had to remove a ton of wood this year due to black knot.

Scott, of your European plums which is the earliest ripening, and when does it ripen?

French Prune is my earliest, it ripens later in August. All the Euros are late compared to Japs. I actually prefer the latest ripening, e.g. Middleburg, which is about a month after that, as the temperatures here have calmed down by then and the rot is less. Most rot is within a week or two of harvest. Now that I am spraying synthetics for disease control I can mostly keep rot under control, but I have to be diligent with the sprays.

@Mickster, I also get some black knot on my trees in the sun, but its not as bad as the shady trees. You may want to prune out more wood on your trees, and summer prune the upward shoots. If sun isn’t getting into the scaffolds at all the tree may as well be in the shade. All of my Euros in the less sunny areas I now “umbrella” prune, the trees have no leaves until about 5’ high and the highest leaves are 7-8’. With this relatively narrow plane there is less sun blocked. Even in more sun areas I do this, maybe 4’-8’ for leaves there.

Opal ripened at the beginning of August here. It’s small but tasty. I think it might be considered a gage.

In your experience - does pruning make it better or worse? I try to keep my plum under 10’ so I prune most of the summer growth i summer. Can it be a another reason for them not to flower?

Summer pruning per se should not be bad. In summer you should be able to thin out a good number of the new shoots, and cut in the middle any of the long shoots.

It is important to develop more horizontal branches, I ended up doing quite a bit of tying down to get them to fruit better. Plums would prefer to be taller than 10’ so you need to do extra work to get them fruiting well at a shorter height. For me personally, incorrect pruning helped delay the fruiting. But I had them planted super close so I had had no room for error on the pruning (and, I didn’t have much experience).

I have the same issue. Tons of flowers, and still near 100% fruit loss every year due to late freezes. Plums can start to flower here as early as late February and early March, which means almost certain flower death later from freezes.

This year alone I had complete fruit loss on plums, peaches, and Asian pears due to freezes into late April - well past our average last freeze date.

Galinas, my oldest plum trees are now entering their sixth leaf. Mt Royal is so far my biggest success. Last year’s yield was just over the top. Nine of us devoured plums through the entire month of September and I still had to dehydrate some. Prior to that twice I had only a handful of plums, so patience is a virtue. This year I have only a small amount of flowers, but I suspect it has gone biennial on me after I did so little thinning last year. We also suffered through a zone 4 test winter with many nights below -30 degrees Celsius and several down to -37. The plums are worth waiting for. 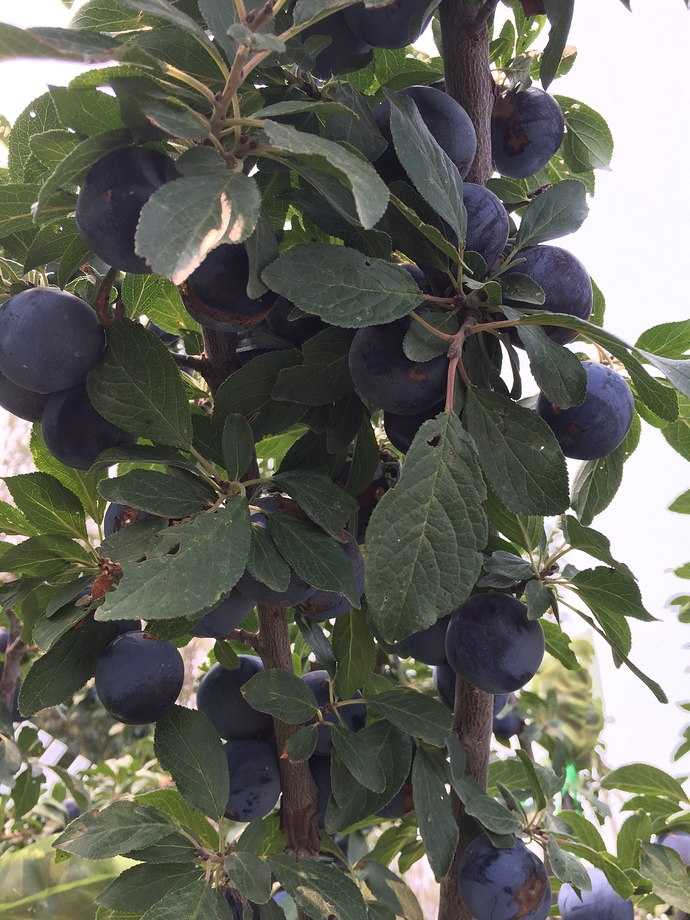 Especially when the shade is to the east for black knot and the dew sits on the wood for too long. Bluebyrd seems immune to BK or is at least resistant, none has appeared on any of my trees in the nursery where there is too much shade from dense planting. I am transferring my whole E. plum approach to starting with that variety and grafting on it so my base tree remains clean. Hard to sell trees with gaping wounds on the trunks, even when they are closing nicely.

I’ve never thought of shade as a curc issue but I trust your observations given your spray program allows close study of the issue. Any theories why the PC would prefer probably less nutritious fruit of a shaded tree- I’m guessing thinner skin.

If you want early and reliable fruiting of E plums I recommend you start with either a Castleton or an Empress on myro rootstock although citation would likely even fruit younger- I just happen to like vigor. Casteton sometimes doesn’t anchor well and is among the least vigorous varieties I grow. For a base tree, I think Empress might be better. A tree with at least one graft of another E. plum variety is your best bet for fertility.

I haven’t tried French prune (why not?) but it is another CA commercial variety so is probably also a very reliable producer. Don’t be turned off if a variety is not rare and grown commercially- I never tasted a real plum until I grew my own- Pluots are bred to sweeten while hard but most E. plums have to be dead ripe to achieve full sugar. Autumn Sweet is a recent intro that is an exception and is delicious while still crisp, but it cracks like clay in the east.

I have never found a variety that can’t be coaxed into reasonably early fruiting if you pull decent sized branches below horizontal.

E plums flower a bit later than J’s and are less prone to being frosted out. Supposedly the two are not compatible, but this year they were blooming close enough apart for lots of overlap, so I wonder if the problem isn’t the gap in bloom. Probably not.

I’ve never thought of shade as a curc issue but I trust your observations given your spray program allows close study of the issue. Any theories why the PC would prefer probably less nutritious fruit of a shaded tree- I’m guessing thinner skin.

Even on trees in more sun I find more damage in the less sunny spots of the tree. I wonder if the curc doesn’t have some genetic conditioning to stay in the shade which will put it more out of sight of birds.

The codling moth doesn’t seem to have this, the higher in the tree the better for them. But they are flying only at night when the birds are asleep. The curc also mainly works at night but they are not fast movers.

I’ve not observed less curc damage in shady parts of the tree, but I probably just missed it. My focus is on their control, but what I see is curc consistently attacking the largest fruit in a cluster, which can create a dilemma. Usually early damage is from feeding and not egg laying and doesn’t involve crescent shaped egg laying wounds so sometimes I will leave the larger slightly scarred fruit- sometimes I leave only the clean. My assumption is if the interior of fruitlets are clean and wounds are only superficial at thinning time such will conditions remain.

I was just thinking about a similar scenario last night. I notice that late developing fruitlets will turn yellow and drop off. I presume this is because the tree is already overloaded with fruit set. If the early fruitlets have crescent bits due to late start with PC control, is it imperative to remove all bitten fruit before the tree aborts later fruitlets that are free of PC bites? If it works, the window for taking action is rather narrow.

If you take out all but the extra-small one I find it usually aborts anyways, so you may as well keep the curc bitten biggie if its not deformed. The main case where you can win is when the size is not all that different, taking out the biggest one if it has a bite will still leave a decent-sized fruit that now has no competition and will grow to a nice medium-sized fruit at harvest.

I was just doing this an hour ago, more or less my final round of thinning. The curc had a bad year, I didn’t lose too much – but I did find a few hot spots.