My Kishu mandarin in Houston has showed mottled leaves in the past months (picture attached). The Meyer lemon shows something similar but not as bad.
I thought it was iron deficiency
but spray of EDDHA iron chelate did not help. What other deficiency could look like this? Thx! 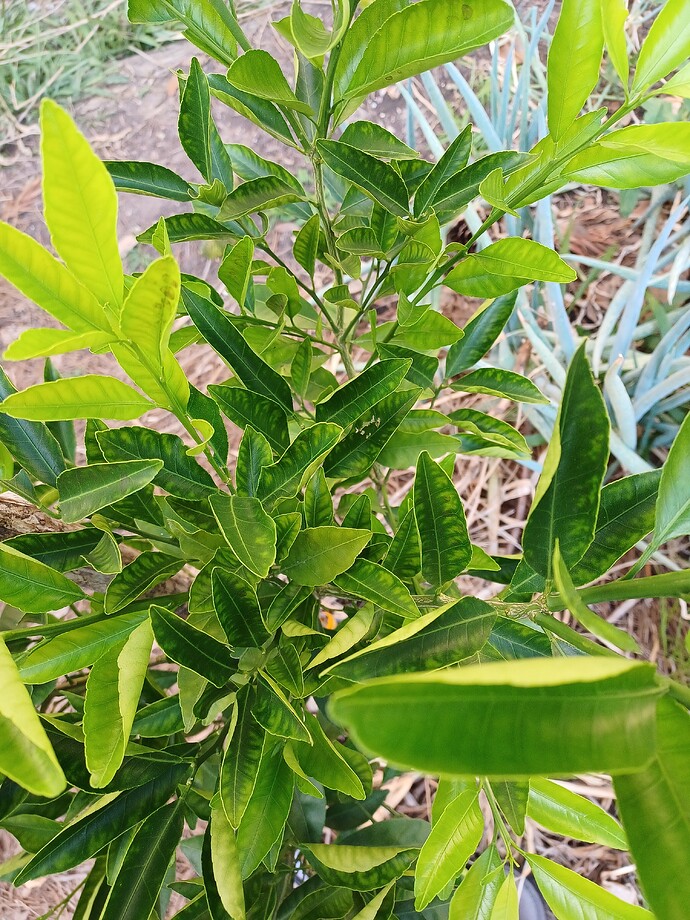 @Nosehair looks too much (Sodium, or Potassium, or Boron).
What did you feed it?

Which Osmocote?
The (14-14-14) has:
Ammonium Nitrate
Potassium Sulfate
DiAmmonium Phosphate
Magnesium Oxide
Calcium Sulfate
Calcium Floride (up to 1%) very toxic
Petroleum Distillates
A proprietary Petroleum product.
Too much (Chloride or Floride) can hurt citrus
Magnesium Oxide is high pH
Potassium Sulfate can cause similar problems to this in citrus including triangle shaped branches which bolt with little to no lateral branching!
Potassium Sulfate tends to make auxiliary nodes go dormant.
Potassium Sulfate ion exchanges with Iron Chelate & Iron Ligands in the plant creating Iron Sulfate.
Calcium Floride ion exchanges with Iron too .
Give the plant 1 teaspoon of Citric Acid per gallon of water every time you water until it is recovered.

Most likely nutrient deficiency in Houston area with citrus is nitrogen. You might add some about a cup of 15-5-10 about 3 foot around the trunk, if it is an in ground tree. If in a pot add about a tablespoon of miracle gro all purpose with 2 gallons of water. Citrus in our area really need a lot of nitrogen to make up for all the rain we get. I know this year is sparse but the soils are depleted due to the excessive rains we have had the past couple of years.

@Richard more Ad Hominems, which are site rule violations!
It an MSDS or SDS sheet doesn’t list quantity I’m not going to be presumptuous.
What is awesome for one species can be harmful for another.
Some species like Citrus are Chloride & Floride sensitive, most species are not.
If my assessment of Citrus reticulata being Chloride & Floride sensitive then address the claim.
Such things are not on Osmocote advertising!
Some species are Sulfur sensitive others are not.
Some like Vitis Vinifera of which there is over 24,000 name cultivars have a blend of Sulfur resistant & Sulfur sensitive within same species.
Some plants are Boron sensitive & others are not!
Some plants like alkaline soil, some neutral, some acidic…
Some species can assimilate Iron Sulfate like C4 Carbon Fixation grasses & CAM succulents & Portulaca oleracea purslane which is (C4/CAM) but most C3 species need Iron chelated.
Too much of any good thing can be a very bad thing for a species or variety which cannot handle it!
Any certified horticulturist or ISA Certified Arborist or Master Gardener would know that.
I’m actually a mentor on an ISA Certified Arborist mentoring blog.
And was added to it as a mentor by the sites former Moderator who was an ISA Certified Arborist Instructor.
So please keep your sarcastic Ad Hominems to yourself.

@Richard SDS sheets, not advertisements.
How about addressing & debating my claims like:

@ZinHead Do you have the primary sources (refereed scientific articles) for items 2, 3, 4, and 5. Osmocote SDS not mention petroleum distillates. Where did you find that information?

@Vlad
On the standard SDS they only list it as a proprietary coating.
This MSDS SDS was filled separately:

Then the toxic Calcium Floride & high pH Magnesium Oxide of the coating was filled separately from both the standard ingredients & the Petroleum Distillates.
https://www.google.com/url?sa=t&source=web&rct=j&url=https://www.sloatgardens.com/documents/material-safety-data-sheets/Fertilizer%20PDFs/Osmocote%2014-14-14.pdf&ved=2ahUKEwjO35uBqML4AhVQDkQIHeLyCCUQFnoECAYQAQ&usg=AOvVaw3Ssi6gGPMneTHHtTPII3tP
This is the SDS sheet with the active ingredients.
https://www.google.com/url?sa=t&source=web&rct=j&url=http://files.tlhort.com/msds_labels/10498-14-14-14_3-4_month_dec_16.pdf&ved=2ahUKEwjO35uBqML4AhVQDkQIHeLyCCUQFnoECAcQAQ&usg=AOvVaw25WqV1Sovgw96Ri_23-fML
This is what is referred to as Candid Honesty & Transparency, lol

@Vlad
Having been an Environmental Services Director for Hospitals, I realized that companies do this.
So I searched all available MSDS & SDS sheets!
I then simplified & combined them,
plus gave my personal analysis as an agronomy researcher of 4 decades.
PS: Floride is toxic to bees & birds.
It binds to Iron & interferes with navigation!
Once Iron has become Iron Floride, no lifeform on earth can properly assimilate it.
Calcium Floride should be illegal to be in a fertilizer!!!

@Vlad
#2 My research as an agronomy researcher of 4 decades.
Iron is involved in the reduction of (nitrates & sulfates), for the creation of (Chlorophyll-A & B).
Just like Sodium build up in irrigated crops, too much Potassium does the same thing.
Excess Sulfur creates the opportunity for Iron Sulfide to be created, aka fools gold crystals.
In the process of Iron enzymes attempting to use Sulfate separated from Potassium Sulfate to create Chlorophyll-A, the Sulfate can chemically react with the Iron Ligands & Iron chelates, even Iron-EDDHA.
Iron-EDDHA is by far the best Iron chelate.
However, it still happens.
Even if only 1 Potassium Sulfate out of a thousand ion exchanges, Iron deficiency still happens!
#3 My research again.
Too much Potassium Sulfate kills wild soil yeasts, which are needed to make organic chemicals & metabolites which increase Cytokinin water solubility.
Potassium Sulfate is not as toxic to yeast as (Sodium or Potassium) BiSulfite but still reduces soil yeast activity enough to reduce lateral branching.
#4 again my research. Don’t believe me, just give a citrus plant Sulfate of Potash with a pinch of Borax to amplify the effects.
#5 Citrus being Chloride sensitive started with Sunkist Corporation research, then expanded from there.

Floride is a thousand times as bad as Chloride!
@garybeaumont @Richard
Already too much fertilizer:
As he gave (Osmocote 14-14-14) which has Potassium Sulfate as the Potassium source.
Too much Sulfate makes Iron unavailable, even though planet Earth is 35% Iron & plants only need a few parts per million!
Citrus can’t properly assimilate (Potassium, Nitrogen or Sulfur) without Iron.
The leaf symptom is primarily psuedo Nitrogen deficiency due to Sulfate inhibiting Iron assimilation, preventing Nitrogen assimilation!

Would it be safer to pee around the tree’s dip line.

@poncirusguy,
Depends upon what the pisser eats, the plant species & if the pisser has a family history of kidney stones or disease or is diabetic.
In such individuals the Krebs Citric Acid Cycle turns Citric Acid back into Oxalic acid & Oxalic acid is very toxic to some plants inhibiting the ability of Meristem to assimilate Calcium!
Also if one consumes a lot of salt this can be harmful to some C3 species.
Too much Sodium can interfere with Iron assimilation & dramatically increase Abscisic acid production.
Too much Chloride can interfere with Nitrogen absorption, plus result in Anti-Gibberellin production under water stress.
In CAM & C4 plants Sodium Chloride is generally very beneficial.
Sodium tends to up regulate CAM genes.
Sodium can substitute for Potassium in C4 plants.
Many C4 species & a few C3 species have dormant CAM genes such as some palm trees.
The correct amount of sodium in combination with chemicals made by sugar starved yeast or mycorrhizae can remove Methyl-CpG bonds to epigenetic DNA & facilitate turning on dormant CAM genes!
Sodium also increases Boron water solubility, so the levels of Boron in the soil & how much a plant prefers are also factors in the enigmatic question of is piss good?
In some plant species Sodium can substitute for Potassium in the creation of sugar as a catalyst but not in the conversion of sugar into starch.
Corn is such a plant.
For Citrus if a human doesn’t eat a lot of Salt, then urine would be a good thing & would actually slow down the progression of Huanglongbing (HLB) greening disease.
Chloride plays an inhibitory role in virus replication, it doesn’t kill the virus.
Sodium increases Boron water solubility & Boron is a catalyst to Ethylene which ripens fruit.
So piss from a vegetarian or vegan pisser is usually very therapeutic for citrus!!!
As to the drip line.
There are chemicals in urine which facilitate the loss of plastisizer from drip line marking it brittle especially if also getting sunlight.
Don’t piss on the plastic itself.
Okay?

@ZinHead Thank you for the information.
You mention many substances that can have adverse effects on plants but I want to remind you that the dose makes the poison.

@Vlad
An Asperger with a cellphone is a lot like Khan Noonien Singh in an Enterprise sick bed, lol.
No reminder needed.
It is far more complex than your quote implies.
Corn, soybean, wheat, canola and alfalfa , cannot remobilize boron through the phloem, from old vascular tissues to new lateral meristem tissues.
They need lots of Boron & experience deficiency quickly.
Even though apples tend to be a high Boron fruit,
Apple trees experience Boron toxicity at 50% less than what alfalfa experiences deficiency.
You can grow them side by side & have apple died of toxicity at the same time alfalfa dies of deficiency!

@Vlad,
Poison has far more to do with species than dose!
Even within Citrus different species of Citrus are sensitive or tolerate to different things.
What will kill one, won’t even effect another.
I can provide you links to such research.
Armadillidiidae & earthworm can tolerate a thousand times as much deadly poison as humans.
Some species are symbiotic with poison & need it to survive like some butterfly.
To say it is in the dose applies only within the species.
Even within human mtDNA haplogroups there is very different level of tolerance to just about everything including sugar.
Sugar levels which won’t effect one group can kill sensitive individuals of other groups!
Same thing for peanuts, strawberry, wheat, corn, etc.
It doesn’t take much Sulfate or Chloride or Floride or Copper to injure some citrus.
Understand???
I have spent 4 decades studying this.

I bought a one gallon lime tree and planted into a 5 gallon pot, using Osmocote. Seems to be doing very well. Must not know about all the toxic chemicals in the fertilizer. Granted, this is the first year using primarily Osmocote on my container citrus. But so far so good. 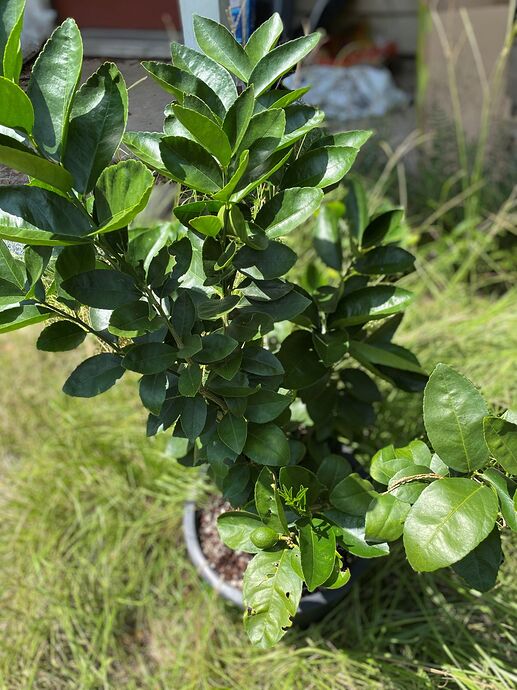 Thanks everyone for the discussion.
I just used the free Citrus Diagnosis APP developed by people at the University of Florida:
http://www.makecitrusgreatagain.com/SmartphoneApp.htm
The APP recognized the issue as Manganese deficiency with a 90% possibility.
Will try to spray some Manganese Sulfate.

@garybeaumont
They are very different species of Citrus & are most likely on different root stock.
There is over 8 dozen different citrus rootstock.
They have very different susceptibility levels to Sulfur, Chloride, Floride, high pH, Copper, etc.
This is your first branch making the transition to psuedo Nitrogen deficiency via Sulfate interfering in the ability of Iron to assimilate Nitrogen.
The leaves will be temporarily transparent, the internodes will become long triangular branches with dormant auxiliary nodes.
It will look like a suckering branch with Iron deficiency in approximately 4 weeks. 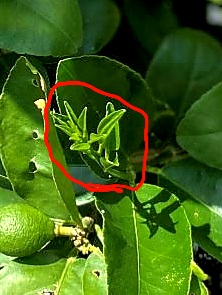 These are most common: 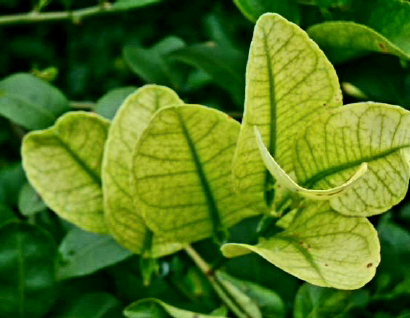