I noticed quite a few comments from about 3, 4 and 5 years ago from people saying they were going to graft onto OHxF 333 pear rootstock. I’d love to know how they worked out for those that have used it. How do you judge its overall performance. Have you come across any issues? Do they really produce smaller fruit, as several sources state? Thank you.

I have moonglow on 333 and it seems perfectly big for me…and also forelle which seem to have a size just like in the store. I don’t have any bigger varieties than that to know if there fruit is dwarfed at all.

Thank you. How old are your trees now and how large are they? How long did they take to begin fruiting?

I have a Korean Giant Asian pear on OHxF333. It was much slower than my others on Betulaefolia and OHxF97 to get established and grow well. However, it appears to be catching up after a few years. The fruit are plenty big at around a pound but I don’t have the same tree on a standard rootstock to compare. In the future, I’d probably opt for Betulaefolia for Asian pears since they can always be pruned to the desired size. I’d rather have a tree that is easier and faster to establish.

If left to their own devices, do Betus pretty much grow to full-sized trees? How large is your tree on the 333?

Yes, trees on Betulaefolia should be full-sized from what I understand. Asian pears shouldn’t grow so tall though. My friend has a couple of unpruned trees around 15 feet tall at 20 years of age. My tree on 333 is around 9 feet tall after 5 years but it started as a 5 feet tall potted tree.

My two forelle are a few years old (planted 2015). Maybe 13-14’ tall? They are just as tall as 87 and 97 of the same age, and actually sprung up quicker than most, although they are on very rich ground…so 333 can still grow tall. The two forelle have a more upright habit than some of the other pears, but I guess that’s not too uncommon with pears. The moonglow is very young, but produced fruit it’s second fulll summer in the ground on 333. Forelle produced early too.

Oh…the 2 forelle haven’t grown much the last two years. They sprung up fast though.

@snowflake Thank you. Between the 333 and 87, which would you say you prefer?

I agree with Andrew’s observations. I’ve had about thirty trees (or attempted trees) on OHxF 333 at this point. I attempted to bench graft the first set of ten and all but one died in the first year. This was largely due to a rookie mistake on my part - initially, I was keeping them in pots that didn’t drain well enough, so they were kind of half-drowned by the time I planted them out. However, I did the same thing to my apple bench grafts that year and they almost all survived, so I think it’s fair to say that the OHxF 333 was relatively less resilient in that regard.

With the subsequent batch of about twenty, I gave them a year to establish before attempting to graft them. About half of the trees grew pretty well in that first year, but maybe a quarter of them were slower, and a quarter barely grew at all.

In addition, when I ended up having to move some of the trees that I had grafted, they generally grew quite slowly in the year following the move. The effect was significantly more noticeable than on apples grafted on G41 that I moved at the same time. Once established, however, both the OHxF 333 stock and the pears grafted on OHxF seem to grow pretty vigorously, noticeably more vigorously than apples on G41.

So, my experience has been that OHxF does take a while to establish and recover from being grafted and being moved, but for the most part it does seem to get going eventually (though I do have a few stunted rootstocks that I may need to replace). I can’t speak to the fruit size issue as I haven’t gotten any yet.

By the way: last spring, I cut several OHxF rootstocks back to the ground so that I could graft and then stuck several of the long switches I had cut in the ground as part of a maze/obstacle course I was making with my daughter. To my surprise, a couple of the switches I stuck in the ground started to root - not a lot, but enough that they lived through the summer.

I’m mostly going for long lived, full size trees, so I suppose I prefer 87, but then I was really happy to get some pears. I have a parker and a flemish beauty on 97 that produced pears in the same amount of time and have a better structure at this point…although they are also on crazy rich ground. I love parker although it will get FB at some point I guess. One of the forelle on 333, and one of the 87 (maybe parker?), severely leaned over 2 or 3 years ago after a very wet period and bad winds. I staked them back up and they have been fine. The other 87 and 97 (I have many others) never had problems with leaning, but some of them are SO slow to grow.

I agree with the others that if field grafting, it seems to work best to graft to a rootstock that’s been in the ground a year. And with my bad back, in the ground in their final spot is my preference as it seems like the second year in the ground if grafted in a nursery bed, the 87/97 roots can go crazy digging to China…and then transplanting at that point can really set them back badly.

Snowflake makes a very good point about the roots digging down. Where the roots of the apple trees that I have on G41 mostly seem to stay within maybe six inches of the surface, the roots of my pears on OHxF 333 seem to want to go deep, which makes it harder to transplant them without doing much damage.

@snowflake - You mention going for full-sized trees and therefore prefer the 87. Everywhere I look, I get a different answer - some sources say 87 is semi-dwarfing while others say it’s pretty much a full-sized tree. They produced pretty large trees for you?

Here’s the info on pear rootstocks from Washington State U.

Looks like I have about half and half on 87 and 97. I figure they are close enough to full size to refer to them as that…or close. I haven’t noticed a huge difference…but then I’m looking trees in the ground since just 2014/15. I have trees of each 87/97 that are tall, and also short. It depends on where I planted them…rich ground or clay. My mistake on the parker and flemish beauty…they are on 97. They have the absolute BEST spreading form of all of my pears…although I don’t know if it’s the rootstock or not. Fantastic spreading growth and not as much shoot for the sky. Wish I could get that on all of my pears. But, I have a couple of red bartlett on 87 in good soil that are very tall too…but they are reaching for the sky. I have a couple of pears on 87 in poor soil…and I previously removed one 87 as it stayed sickly and unrelated to the rootstock I think (it’s roots went to China)…and another one or two that are not nearly as healthy as I would want.

My Seckel on 87 looks like a truly hot mess while my doyenne du comice on 333 is a respectable well shaped tree.

Both have been very drought tolerant

My 3 trees 2 Bosc and one comice. on ohxf 333 five years in ground year three produced fruit for first time. All had good size last year Bosc nice size my comice on the small size, with fewer fruit. Hopefully this year is great I was out pruning and I see a lot of fruit buds. Definitely more than last year. May take some out. Trying to get them to grow out not up. There reaching 12 13 ft gonna cut them back to 9-10

Here is a young parker on 97 on very rich soil. I mostly just let it do it’s thing and it spread out nicely on it’s own. If only every pear could do that! 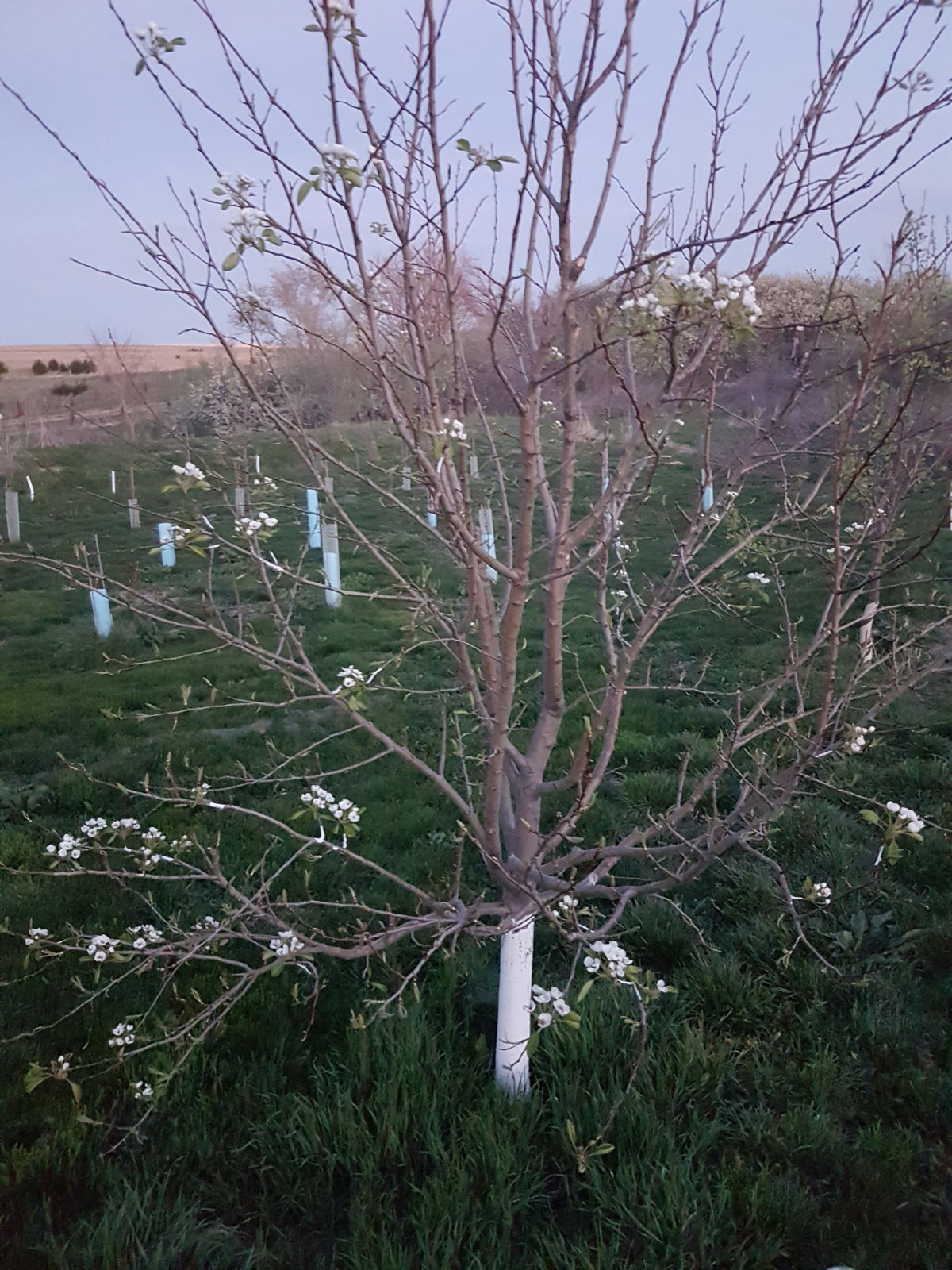 Has anybody tried Honeysweet on OHxF 333? I have 4 rootstocks on order, and I plan to graft Bosc, Comice, Seckel, and Honeysweet. The other 3 have already been covered, lol.