Doesn’t look like this species has been mentioned much on the forum here, but it’s a native edible here in the PNW. The fruit is small with a lousy flesh-to-seed ratio, and some specimens taste strongly of cucumber. However, I have also tasted some that are quite good with a decent amount of flesh, and they ripen almost a month earlier than most other stuff, so I figure I’ll make a little room in my yard for some native shrubs. Especially since they seem to do fine in partial shade, and mostly grow as an understory plant in mature forests.

The flavor varies a lot in wild populations, so I’m planning to plant a small patch in my yard from cuttings or seeds of selected wild plants, and maybe eventually graft on other good specimens. They are dioecious and require pollination, so I’ll need at least one male in the patch.

I collected some seeds today from one that was sweet, plump, and good-flavored (almost no cucumber taste): 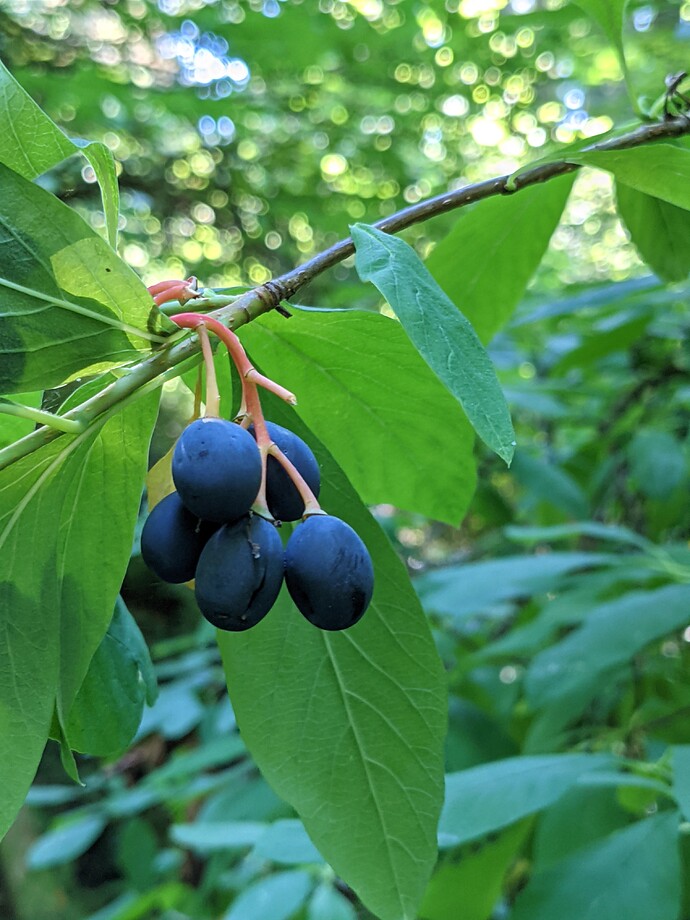 I decided to look up germination info and found the attached report on the species, with the following useful table:

I would love to hear if anyone else has experience growing osoberries, or knows of any improved cultivars worth hunting down.

Thank you for telling me what these are
In IL there is a Bike trail called the Gilman trail ,
where these, and wild plums grow by a place kids visit called Blackberry farm.

Somehow I knew these were in the prune family but I think it was a lucky guess they have no Flavor here when I tried , but maybe under ripe

IS Nuttallia cerasiformis a synonym of them
I do not know when the name may have changed could confuse other people though?

Just looked at the flowers though very pretty. 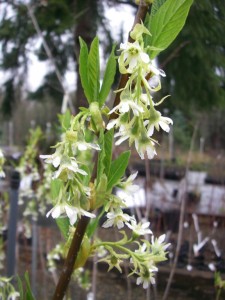 IS Nuttallia cerasiformis a synonym of them
I do not know when the name may have changed could confuse other people though?

Listed here as either synonym or “misapplication”:

keep In mind Things that look pretty can be bland ornamentals
Not Because they are in the wild state ,

Sometimes people breed plants for being showy ,when the wild ones are sweet but a lower yield with less flowers , and showy fruit…

I’d say about 75% of the wild ones taste vegetal with a cucumber flavor, the other 25% range from slightly sweet to pleasantly sweet, and some taste more fruity. This bush had the most plum-like ones I’ve had yet.

But they all are pretty showy. The stems turn very colorful in the sun. Here’s one in direct sun from a few weeks ago: 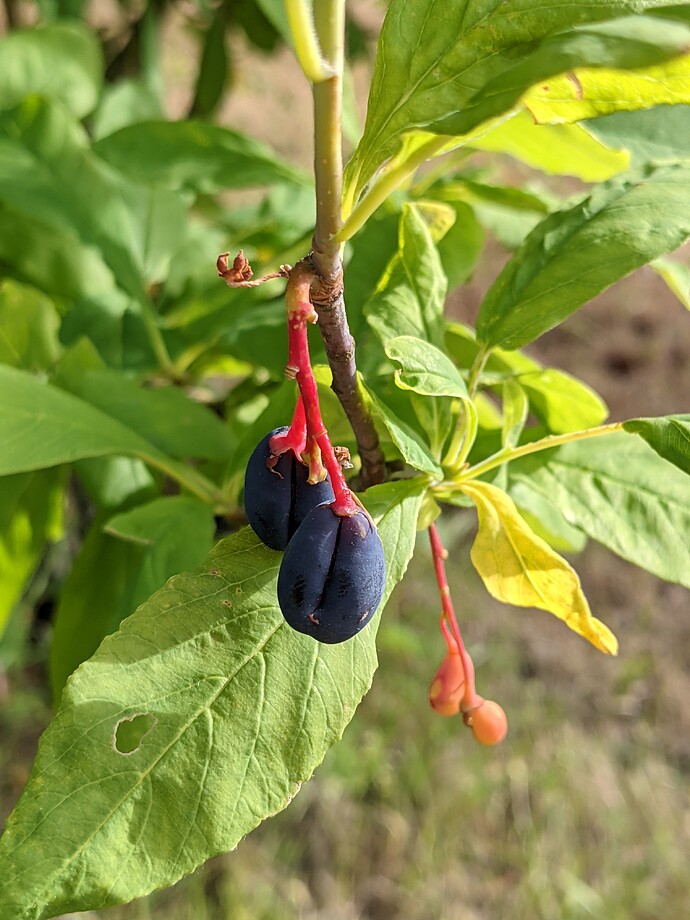 Wikipedia says this “Indian Plum” is the only species in this genus. Oemleria - Wikipedia

I wonder if this plant is actually related to some other fruit closely enough to hybridize it? It does look interesting. I guess once you select for flavor @swincher, your next step would be increasing pulp ratio?

I hate repeating myself but certain things have no flavor until sugar is added like
elderberry (caprifoliaceae family)
I have had Beauty berry (caprifoliaceae family )
picked it tried raw, but never processed it,
but it is supposed to be another which has no flavor picked raw ,
but does after boiling and adding sugar (or reducing )
(Mexican hawthorn tejocote ) is good after boiling /w/sugar **as a juice **
wish I would of bought 100 pounds at Mexican store it was 1 buck a pound 2 years ago.)
Everyone says it’s no good, but they are not using it right. 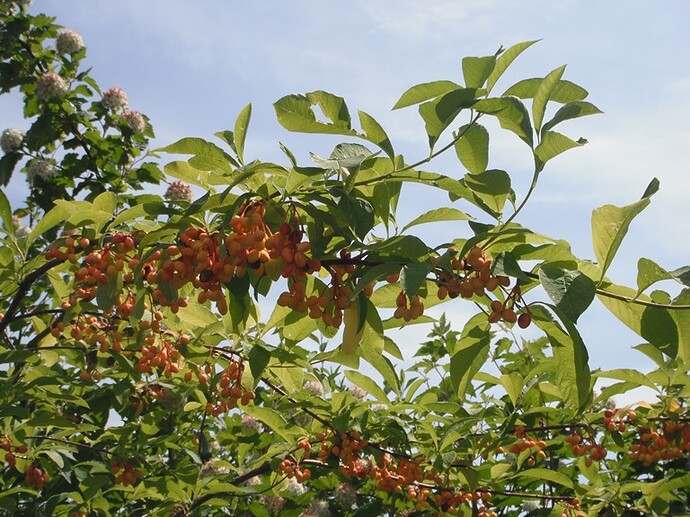 Osm- is a Greek root meaning “smelly;” aronia is the genus of chokeberries.

I guess once you select for flavor @swincher, your next step would be increasing pulp ratio?

I don’t expect I’ll be doing much in the way of breeding, this will be mostly an attempt to collect the best existing wild specimens I can find. But if that works out well I’d be happy to make available cuttings/clones for anyone who wants to improve them further!

Went for a walk with the kids today and noticed the osoberries are already turning fall colors. They are always way ahead of everything else, but still this is like a month ahead of schedule. I assume the heat and lack of recent rain are to blame. 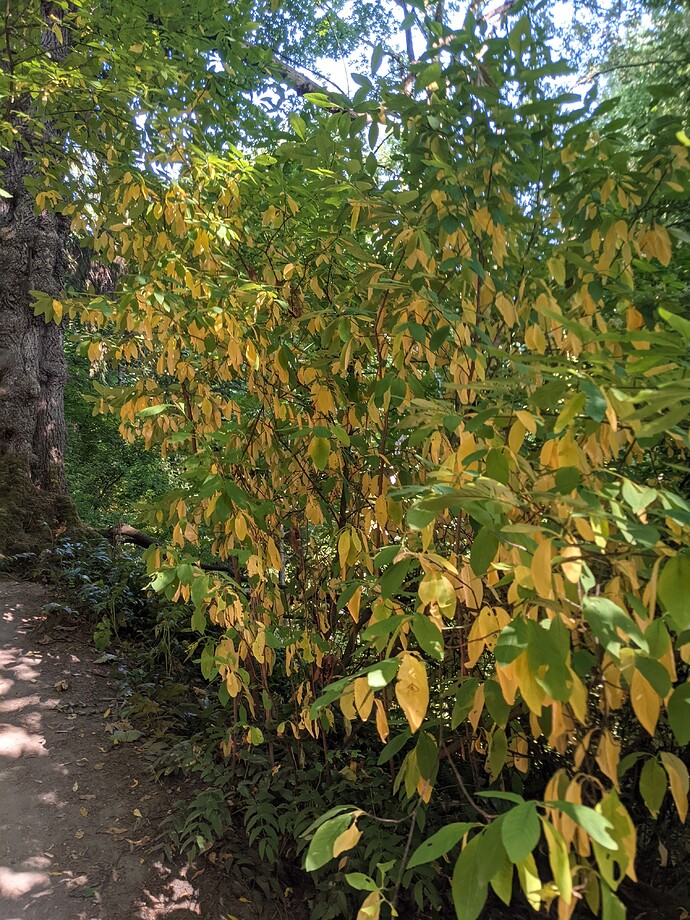 They grow like weeds locally.
Yes
taste like a sweet cucumber
Luther Burbank mentioned it as a potential for breeding.

Neat stuff! I wonder if the soil conditions affected the berries and caused the flavors to vary from bush to bush or if the genetics truly veered away from the cucumber flavor. I have a row of four bushes I potted last year and decided to put them in the ground last week but relocated them to a partial shade spot because I think the sun was too hot for them this summer. As a result they either had rolled leaves or dropped leaves.

I would love to obtain some cuttings from you so I can compare with my berries when they appear. Just my luck, I probably have all four of the same gender.

would love to obtain some cuttings from you so I can compare with my berries when they appear. Just my luck, I probably have all four of the same gender.

I haven’t been able to find anything discussing the best ways to root osoberry cuttings, or if it’s even feasible, but I’m sure they can at least be grafted if not rooted. I’m stratifying my first seeds still, so don’t know what success rate I may have with these seeds. I’ll probably try rooting cuttings this winter/spring just to see if anything works well.

I’ve been thinking for a few years now that osoberry would be a worthwhile garden plant if people would keep an eye out for superior individuals that could be cloned. So far I haven’t found any worth cloning so I haven’t experimented, but multiple references indicate they can be propagated from cuttings and my instinct would be to use suckers from around the base.

Recently I noticed a specimen that looked much thicker stemmed than what I’m used to seeing so I’m wondering if it might be one of those rare finds where it’s the one tetraploid in an otherwise diploid population. If it ends up being a female then maybe it’ll have larger fruit. I’ll be keeping an eye on it and also keeping my fingers crossed. It’s definitely a species I want to start propagating since some of my nursery customers are very interested in native plants, but if I’m gonna propagate it I want to make sure I only use the best starting material. No sense in proliferating average or poor quality specimens. Even for wildlife value alone there is good reason to select for more heavily productive clones. The birds won’t be mad about it at all.

In terms of propagation, I believe that outside its native range it would make sense to selectively breed for fruit quality to the point where seed propagated individuals reliably produced good quality and abundant fruit. However, within the native range there will always be so many non-select wild specimens around adding pollen to the mix that selecting for good seed lines would likely be futile. I wouldn’t be surprised if they could be clonally propagated via stool beds though.

Editing to add the following:
(Quote from below linked article) “It is easy to propagate, especially as live stakes, keeping restoration costs lower than purchasing fully potted plants.” 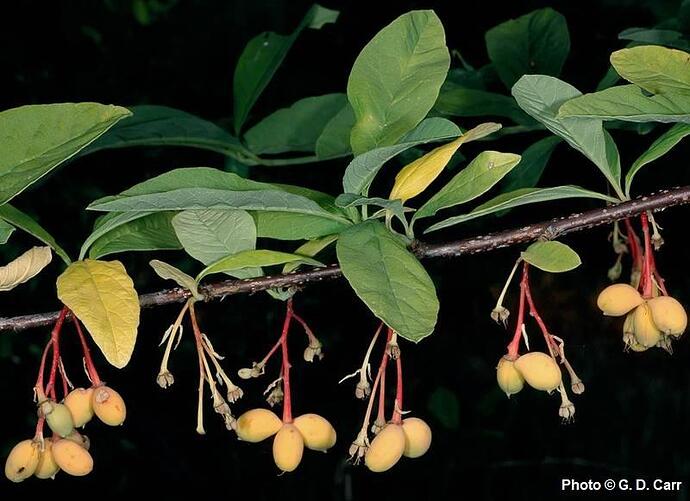 A deciduous shrub which produces clusters of white flowers in very early spring. This shrub is one of the earliest plants to bloom in Washington and grows in open forests, forest edges, and riparian

I’ll try to collect a few cuttings from the two bushes that I thought were at least better than normal and see if they’ll root. I noticed they are already flowering today 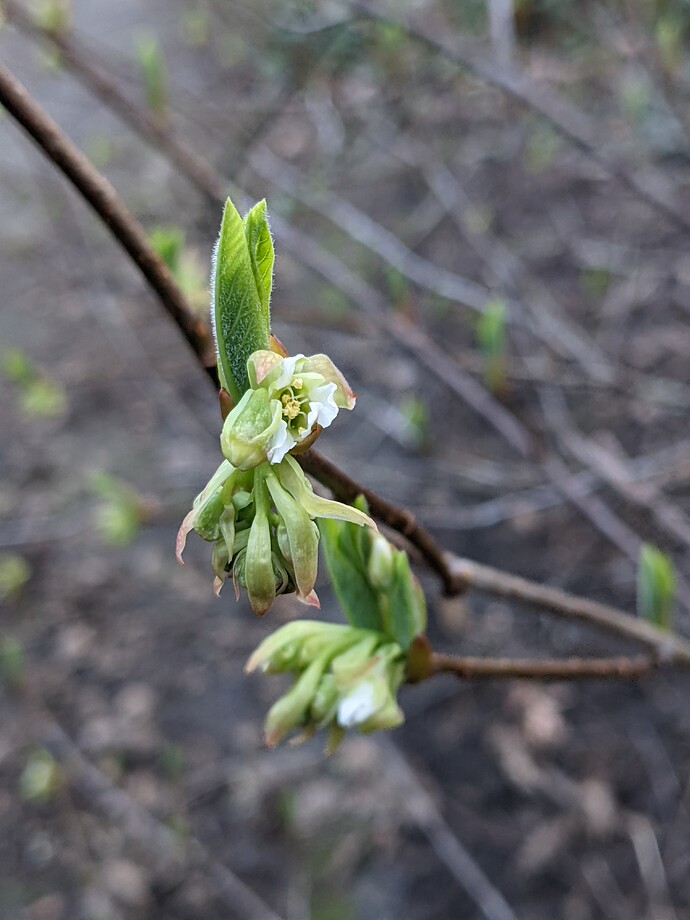 Nice! At the very least, good fruit or not it’s a great harbinger of spring!