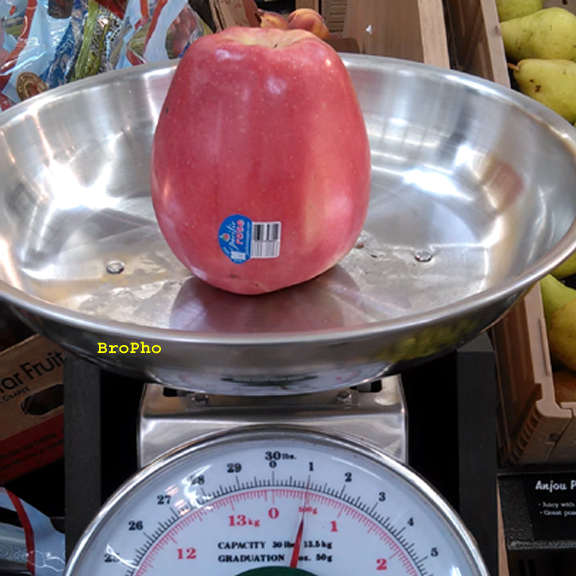 Yes Bill they are pretty apples. Not my favorite though as they aren’t acidic enough for my tastes.

I have never tasted it but it should be a big seller due to it’s fantastic eye appeal. My preferred apples have a reasonable acid kick like Pink Lady. I’m pretty sure most buyers want a sweet apple like the tons of Gala I see everywhere.

Yes it definitely gets high praise. To me it tasted a lot like Fuji. But my pallet is not that refined.

Pacific Rose Is showing up in the grocery stores again but I was not going to spend $2 per pound. Anyone been spending the money and if so were they worth it?

Trader Joe’s sells a few Club apples like Jazz, Pacific Rose, Envy ($1.29 per apple). Don’t know how long these apples have been in storage. Tried them. Good but they did not stand out.

I grow 4 honeycrisp apples so they are not as special to me as Fuji, gala, pink lady etc. . Club apples are interesting to me in a way just out of curiosity. My question is can they really be better than a really good Fuji? I’ve had Fuji that were amazing but typically there not. I certainly know why that apple is special though I’ve tasted it just a few times at it’s best.

I"m really not at all interested in apples we can’t grow. There are plenty of apples that couldn’t taste better to my palate that are available to all of us. I never even look at apples in stores, unless there has been a crop failure here.

Some of the club apples are very good (Opal and Minnieska aka SweeTango). Some of them are nothing special at all.

But to me the whole club phenomenon is just greedy and mean-spirited. To lock up a genetic speciman and hold it hostage from the public is bizarre.

But to me the whole club phenomenon is just greedy and mean-spirited.

You could say that about all capitalistic incentives. The breeding program that developed Honeycrisp got very little money for the years of toil invested in creating it- it caught on at the tail end of the patent. Government funding, especially at the state level, has been drastically reduced for projects such as breeding new fruit varieties.

I really don’t know if the most efficient way of running these programs is through tax payer funding or by having the producers of the fruit pay for it and passing on the cost to customers- but this is probably an instance where the private sector is the way to go. I believe in letting the gov do what it can do best and leaving the rest to the private sector. New Zealand is doing a lot of breeding with tax dollars, as does Canada- I would like to see a cost analysis of which approach gets the most bang for the buck. I’m certainly thankful for the Canadian pear introductions.

Pacific Rose is my absolute favorite store-bought apple at this point. The number one reason is flavor. It’s like eating a perfumy flower in apple form. And It’s very crisp. The only drawback in my mind is that it has medium-thick skin, but that’s getting picky! And it doesn’t have much acid so tart apple lovers won’t like it. But when I can get Pacific Rose I don’t buy anything else. And I would definitely grow them if I could!

It sure seems unfair from the prospective of a backyard grower who is trying to collect the best tasting apples that can be grown. On the flip side , at least you can buy a decent tasting apple at the grocery store now. When I was growing up it seemed like it was a choice of red delicious or you could get red delicious.

I bought Pacific Rose from Safeway several times last winter. It is a very good apple, l believe originally from New Zealand, but currently grown in Washington. Its much more delicious cousin imo, Pacific Queen, is much more rare. I bought some about twelve years ago from Walmart (was imported from NZ) and was never able to find it again

. PQ has a superb flavor, related to that of PR, but was sweeter and softer, somewhat of a red delicious texture.

I think the Growing Fruit forum needs a new category- Buying Fruit. People can go there to cry about the wonderful club varieties they don’t get to grow. Hmmm, I’m 65 years old- how long do these patents last?

I’m glad I’m not the type that gravitates to a favorite variety from a taste standpoint- just too many great picks to choose from. I focus on really good ones that are reasonably easy to grow- obviously, none of the club varieties are in this category.

Since most of the taxpayer funding is no longer available, many US university plant breeding programs have moved to licensing models that generate revenue in order to survive.

I’m happy to pay a few extra dollars to these licensing programs for a better rootstock or better varieties of plants that I can buy.

Club apples are a new model. I don’t like it and I hope it fails. Fortunately, I have not tasted a club apple that I’m willing to pay a premium for.

If most consumers refuse to pay the premium price, the club apple idea will fail.

Let me know if you get lucky…