I just snagged the last two pounds offered by delectation of tomatoes. Couldn’t afford ten cents a seed to buy from Baker Creek…but I did love reading the reviews on this variety on their site. Here is a link with pictures. 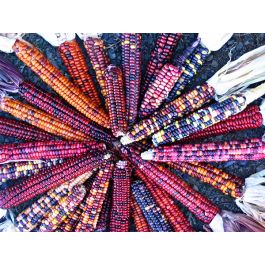 This corn is the very definition of rugged beauty! These incredibly tough plants were bred in the bitter cold mountains of Montana. They boast impressive cold hardiness, earliness, drought tolerance, and they thrive at high altitudes. Montana farmer...

Some say it can handle a little frost, so we are planning on staggered plantings starting earlier then usual.
I love the sound of colored up stalks and ears and kernels…and only 62 days to milk stage sounds cool too!
Creating this thread to share my excitement so my poor daughter doesn’t have to hear about it again, and also so there is a place to share pictures and progress next year.

Is anyone else growing this?

Get some Glass Gem to grow for your poor daughter.

Once my grandmother gave me a couple of ears of painted corn. She didn’t grow it and I have no idea where she got it, I was ten years old and thought it was really neat. One ear was all deep red kernels with purple husks. I planted seeds from both ears and the red seeds all made corn plants that were purple, it was really pretty. Unfortunately being just a kid and not understanding the full concept of cross pollination, I planted the seeds from the other ear in the same patch. The seeds I saved from that year were crossed with the regular painted corn and the stalks were only a little purple. I saved seeds from the best colored stalks but I never got the color to come back.

They claim all the colors are in the genetics, even if they aren’t in a particular ear. Planting one color can get you a huge variety. It aught to be fun!

I hear you! My wife assures me that discussing vegetables and genetics is boring. I do my best to limit such conversations, but sometimes I can’t hold it all in.

I look forward to seeing your pictures and hearing about your progress.

While I haven’t grow painted mountain I have grown and bred coloured corn before, they are heaps of fun. I find 62 days to milk stage difficult to believe, if I were you I would record dates to see how accurate that is. If it is only 62 days from planting seed to milk stage then painted mountain is a remarkable variety.

Corn colour genetics is difficult to understand. You have basic dominant/recessive which are simple, but corn also tend to have transposons and retrotransposons which make it interesting if you are breeding for something in particular and have a wide gene pool.

If anyone has a corn colour genetics chart I would love to see it. Most of my knowledge comes from snippets of info here and there as well as personal experience.

I grew painted mountain a few years ago along with alot of other flour/dent types
it grew well and the kernels were pretty but i favored cherokee white flour corn that year for its mild pleasant white corn flavor.

I grew chapalote corn this year and was surprised to taste a sweet corn flavor present in a flour type of corn.
I’ve never experienced this before and for that reason i can’t see myself growing any other varieties of corn other than cherokee white and mostly chapalote for flour i still like luther hill for sweet corn but have nothing to compare it to because i haven’t grown any other varieties of sweet corn other than chires baby corn its cute and prductive but is really much more of a garnish

I purchased the cherokee white from southern exposure and the chapalote from rare seeds.

I would like to add that flavor in a flour type other than blandess in a dent corn is rare for me which is why i prefer chapalote so much, cherokee is good comparatively also for its light pleasing corn flavor.

In 2010, I went to the seed swap meet at Bill Best’s place in KY. Tony West brought some Cherokee White flour corn. I’m fairly sure that Southern Exposure got their seed from him at that time. I got 2 ears of Cherokee White from him and grew them the next year. I tried to grow it again this year, but raccoons prefer it above most others.

The drivel on Bakers Creek about Chapalote is interesting but incorrect. They make a statement that it could be 4000 years old. We know enough about corn history to say that one of the major mutations producing the ear occurred about 1500 years ago. Prior to that time, corn produced seed at the top of the plant just beneath the tassel. Since Chapalote is a normal corn that produces an ear on the side of the stalk, it is not possible for it to date back 4000 years in present form.

It is worth delving into the history of maize just to learn about the incredible changes wrought in this “amaizing” plant by the hand of native growers.

I grew some painted mountain corn this year. Four 20’ rows, 18" within row spacing and 24" between rows. I got about 10 lbs of dry shelled corn. That’s a pretty low yield on a per acre basis. Probably could have spaced it tighter. It seems poorly anchored and has a tendency to flop over. It was planted at the end of feb and we shelled it in early june. It really does come up quickly in cold soil. I was surprised by how well it grew so early in the season. When it was first coming up we had a couple of 26-28F nights. I put a solo cup over each plant and piled my leaf mulch over the top and had no damage. Later on, we had a couple of lighter frosts during which I provided no protection and there was some damage to the leaves but it recovered quickly. I probably could have picked it earlier and finished drying under cover. I ground some up in a coffee grinder tonight and made corn bread. The kiddos were raving about how good it was. It grinds to a very fine power so it has more of a cake like texture than the usual corn meal that we use. And we all know how kids feel about cake! I just wanted to drop this report for the record in case someone is considering growing it. I’ll probably try some more next year. I’m in 7b/8a alabama.

Thanks for the informative report!

We ended up growing sweet potatoes this year instead. I have a couple pounds of seed though and might give it a go next year.

Shelled my painted mountain corn today. Planted it late feb, harvested it mid june. 5 rows with plants 9 inches apart squeezed into a 7.5×33 ft bed. I got 25 lbs of corn. I think it is pretty close to fully dry. If my calculations are correct that’s roughly 90 bushel per acre which probably isnt too shabby for heirloom corn. The ears were a little small due to the tight spacing. I was shooting for 200 plants for seed saving purposes.

This is my 2nd year growing this corn. In our area, I remember we plant corns in late May and early June. That is when I planted. My corns are as high as the corns in the field.

But I think for this corn, this is too late. My corn already sent stalks. But they are barely 2’. Next year (if I plant them again), I’ll plant much earlier. So they get more time to grow.