Pakistan mulberry did not survive winter in Raleigh, NC

A two year old tree 12+ ft high seemed to survive the coldest days of the winter but once it started to wake up and sap started flowing (due to some unusually warm days) it could not take any freezing temperatures after. Buds started to swell after the warm up and a few freezing nights including one in the low 20s killed even 1.5 inch thick branches. The tree died all the way to the base., The thickest part of the tree at the base was almost 3 inches and most of it has died off. All other mulberries are doing fine.
Don’t waste your time with Pakistan mulberry if you live in the Durham/Raleigh/Triangle area. It seems like it either has to be north of Virginia or south of Columbia(this is just a guess) for this tree to do well with no die back. I will be replacing the Pakistan mulberry with another fruit tree.

The Pakistan mulberry is known to be extremely frost sensitive. Nurseries will rate them at zone 9 and higher. I am zone 5 and it is supposed to get -20 here so zone 9 means it can only live down to 20 degrees exactly. Even then many seem to struggle with it in zone 9.

My limited experience with mulberries is that every one I’ve tried has been very vulnerable to low temps once they start to bud out.

Mine has made it four years now in 6b/7a Va.
Still have not seen any fruit though.

I planted Pakistani Mulberry in Jan 2021 and it never leafed out from the trunk, despite the tree being in great condition at planting. The entire trunk had died sometime in the winter. In the summer, from the roots emerged new sprouts, which the deer enjoyed.

I had bought this tree per advertised listing of zones 6+, but it is incorrect according to the accounts of many growers.

Many plants that are zone pushed just need to get past the first 2-3 years. After that they may die back some, but rarely complete death.

I agree it makes sense that older trees can survive harsher winter conditions, but I don’t think this specific tree is really zone 6 per advertised.

There’s too many accounts of this tree dying (/back) on this forum.

I’ve only seen a couple places say zone 6. Most have warmer zones. Mine has been unfazed by winter here so far. I’m in the top part of zone 7, but it still freezes here.

I’m few hours drive from OP, so I would say we’re prone to similar freezing events after trees wake up. Seems this tree is prone to hard freeze once outside of dormancy.

Nurseries will rate them at zone 9 and higher

My limited experience with mulberries is that every one I’ve tried has been very vulnerable to low temps once they start to bud out.

I think the difference is that it didn’t get any hard freezes after leafing out. I suspect @TheGrog is right.

The fruit is pretty distinctive (middle of this pic): 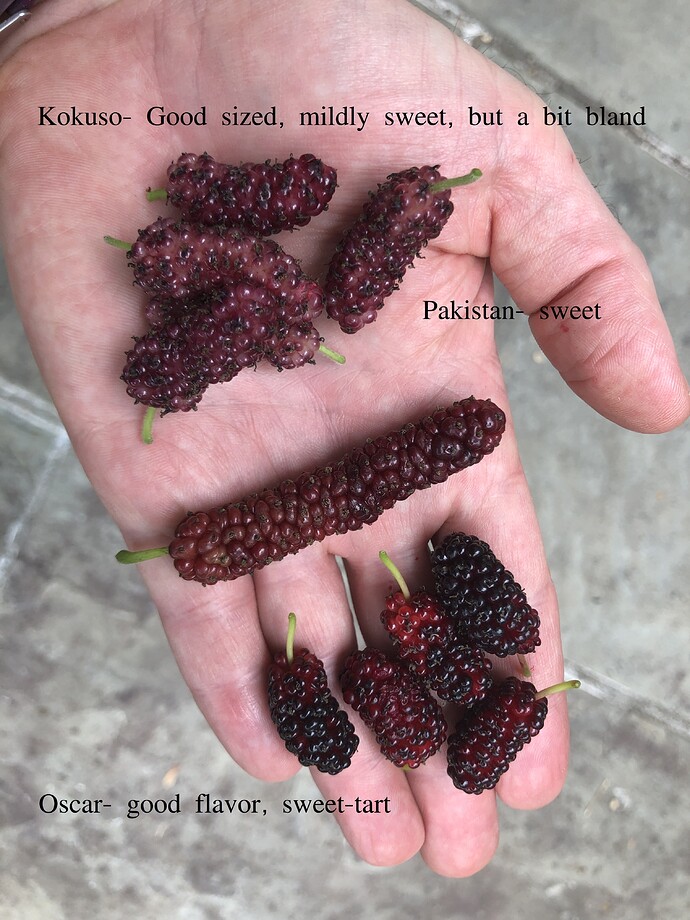 I’m actually have trouble keeping the growth in check. It wants to be a 50 foot tree with fruit out of reach. And it plans on getting to 50 quick. More than five foot of growth is nothing for this thing.

I’m in Raleigh and have a 1 year old Pakistan mulberry in the ground. The late freeze killed the top couple of buds on it, but the tree itself survived fine. I see new green bud growth as of today. I know microclimate is everything though, so maybe I got lucky.

I lost a 8 ft tall Pakistan and a white shatoot in 8b north Florida! We have such warm winters that everything starts to push leaves and fruit then we get a late freeze and really does alot of damage .I think they would do better somewhere that’s constantly cold so they stay dormant! I have the same problem with citrus! You are right. Further north or further south than me!

Mine got burned back last month. I thought it was dead, but I’ve noticed new growth on the bottom 8 or ten inches of a six foot two year old.

Lowest recorded temp in Islamabad, where Pakistan mulberry originated, is 28F.
A.J. Bullard recommended planting graft union below grade, so that WHEN it froze back, it could grow back.
Mine killed back to ground three years in a row. Would regrow 10ft in a season, but never fruited. Dug it up with intention of taking it to my Dad, in Z8, but misplaced it along the way

I will have to try that tip. Sounds like it could work!

Are all nursery pakistans grafted or not?

IDK. I suspect that it roots easily enough that some nurseries may be offering it ‘on its own roots’.
That may or may not be more time & space-intensive than just grafting/budding onto seedling rootstock… and away we go!