Anyone every try this Pakistan Mulberry from here? States that is is cold hardy down to Zone 4?

Beware of that site.

There seems to be several nurserys that have pakastan in pretty cold zones. I will say the graft I made in zone six grew well but froze back to the graft union and died

No way. I’m marginal for this variety in zone 8a. You could probably keep it in a pot. A very large pot or big greenhouse.

Thanks, do you think the tree shown on the link would make it in zone 6?

I’ve met the owners. They’re a couple of bullshiters from way back. Their Pakistan Mulberry is no different than anyone else’s out here in California – for heaven’s sake they all buy from the same wholesale source. I’d be wary of any plant material from them. On the other hand, they do occasionally have sales and/or free shipping promotions on national brand fertilizers and hardware. These are things they cannot misrepresent and will sometimes save you money.

do you think the tree shown on the link would make it in zone 6?

No… Although that is just an opinion. I never tried them. Many cultivars are not that cold hardy. Oscar and Wellington sound worth trying in this zone, we are in the same zone, but that doesn’t mean much. Plus I’m more a 5b than a 6a.
I have Silk Hope, and also Wacissa and Shangri La. The latter two are only hardy to zone 7 and will be kept in pots in the garage with my figs. I will clone them and plant out the clones to experiment with hardiness at some point. Both of them were from root cuttings, and were extras. Of course the cultivars I really wanted didn’t take! Trying again with some new methods this winter,and next spring.

What’s specifically wrong with what they sell? Almost all their trees are Dave Wilson grown. I’ve bought about five fruit trees from them.They were packed well, shipped promptly, labeled correctly and grew great.

Zone 4 for a Morus Alba (which is what they are selling) is a bit unbelievable though!

FWIW, I bought a Pakistan from a local nursery which was also grown by DWN. It has grown great in 3 years and gave enough fruit to take out a major scaffold!

What’s specifically wrong with what they sell?

I was clear about that.

Zone 4 for a Morus Alba (which is what they are selling) is a bit unbelievable though!

I bought a Pakistan from a local nursery

Pakistan is not your average Morus alba, it’s completely hardy in Zone 9, risky in Zone 8 and needs to be protected until mature in Zone 7. Designating it as hardy to Zone 4 is grossly misleading.

If you try Pakistan in zone 7 or lower I would keep it in container, clone it by rooting cuttings or an air layer. Air layers work well on a lot of plants and are fun to do! Experiment with the clones. I myself feel Pakistan is not going to work in zone 6 and I’m not even going to try. Well if somebody sends me cuttings I might, but I would not buy one.

I had Pakistan here in KY - just about 70 miles NW of Nashville TN - for several years. Following AJ Bullard’s recommendation, I planted it with the graft union below ground level. It would freeze back to the ground every winter and re-grow 8-10 ft every year… but never ripened a fruit.
After about 3 years, I dug it up and potted it, with the intent of taking it to my dad, on the zone 7/8 interface… but misplaced it somewhere.
My understanding, from Mike McConkey, is that the lowest recorded temperature in Islamabad, where it originated, was 28F. It gets considerably colder than that here, most winters.

Late frost are the killers of them here in my zone7b garden. If in leaf when a frost hits it will die to the graft union.

Had a very early frost the last year Pakistan was in the ground here… maybe in early October?.. then it warmed up again… it leafed out again and bloomed… but there was no chance in lleh that those berries were gonna ripen before actual winter arrived.

Onegreenworld posted a link to an LE Cooke pdf. That company is a large wholesaler. Sad news is that they are going out of business. They supply a lot of small independent nurseries across the country. It’s a huge blow to them. To all of us. The company is very old too.
http://www.lecooke.com/Images/Shades/Mulberry/Pakistan-Fruiting-Mulberry(RGB).pdf

I got a little more info, they are closing their bare root tree division, but will still exist.

Notice is given and reasons behind the planned closure of the L.E. Cooke Co Bareroot Nursery

They worked with Dave Wilson nurseries. I think they grew out some trees for them like Red Baron peach, and many others. So I see a shortage in trees after this year. They have a full crop, the last crop this year.

Check the chill hour requirement, I think it is like 200 hours or something. Had one for two seasons 45 miles N of Atlanta, then died this spring. This thing showed green swollen buds in January. Very risky in zone 7 with a lot of winter left.

If in leaf when a frost hits it will die to the graft union.

i agree. Would also like to add that paks seem to be somewhat tolerant of cold weather, since it is often the last to drop its leaves during winter of all the mulbs we’ve had. Seems like it is only tender to cold when its sap starts flowing in spring and abruptly frozen out. The days will start getting longer in just a few days, and yet our pak is still quite verdant, whereas our nigras have been snoozing for weeks now.
Below photos were shot today, just a couple days from winter solstice, with our pak stubbornly clad in green! Nigra is the gnarly one. 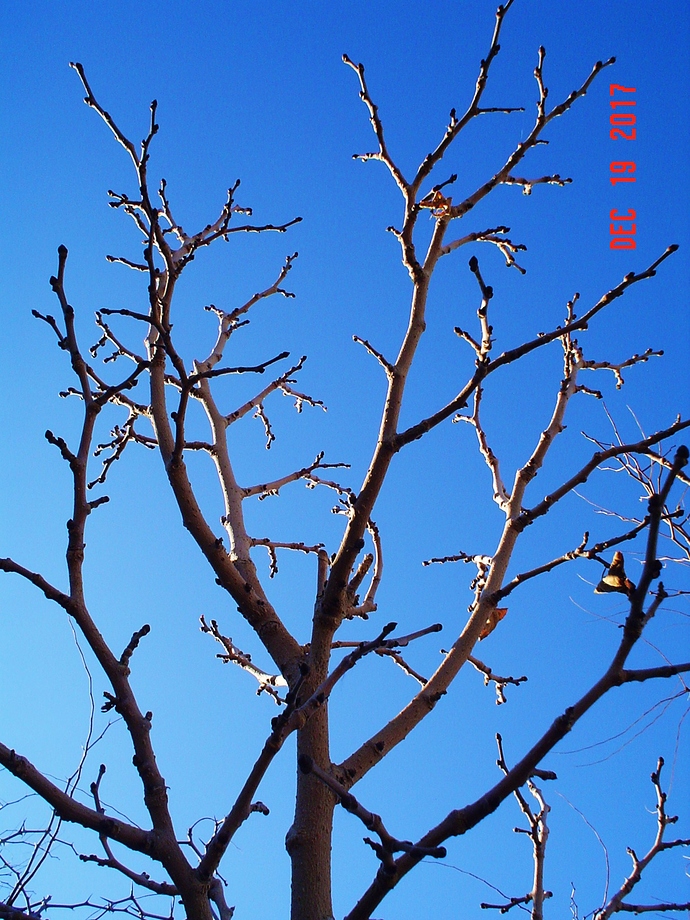 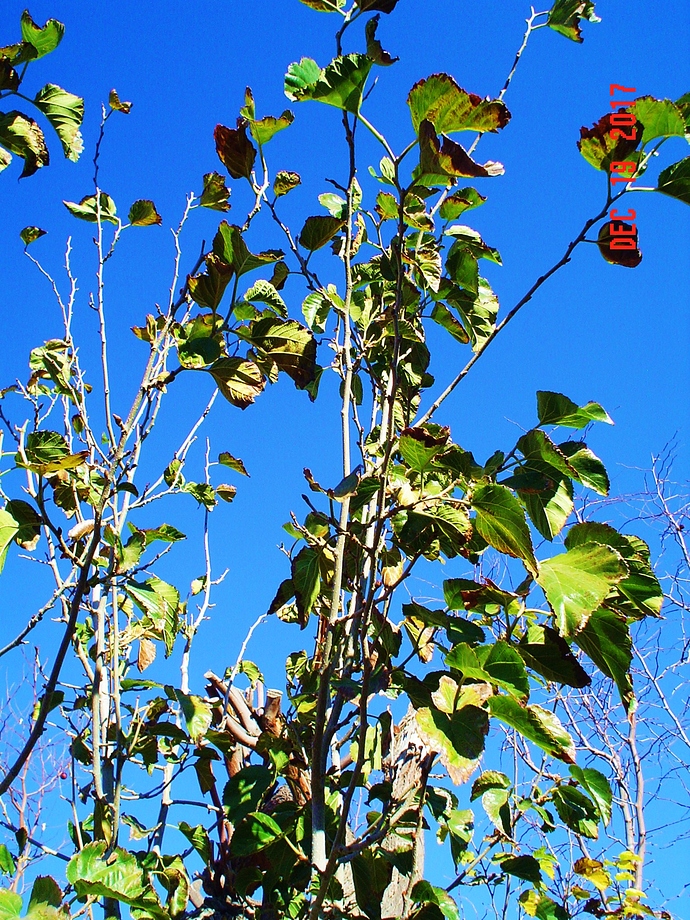 The scientific genus of mulberries is Morus, which has the same etymology as “moron”, as the botanists who named it evidently aware that mulbs were “sluggish” to leaf out in spring.
Those botanists obviously weren’t aware of pak mulbs-- the true morons of the genus since they leaf out quite early. Here they start leafing out as early as peaches and plums. A late frost will ruin the berries, if not the tree itself.

Nigra’s seem to be the “smartest” of the mulbs, leafing out very late. Unfortunately nigras happen to be fools in some other ways-- humidity and severe winters seem to drastically shorten their lifespans.