On Friday I pruned back the Fall and Winter overgrowth from my “Frederick” passion fruit vine, collecting in all about a cubic yard of cuttings. I also fed it a bloom supplement - hopefully by May it will start raining fruits. 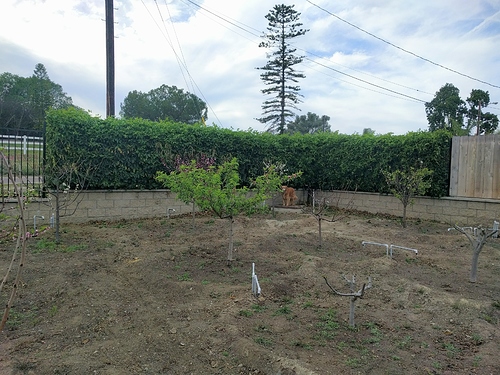 Is that Frederick growing on the perimeter fencing? That looks very dense. That’s an interesting furry statue in front.

It’s about a foot thick on each side of the fence. 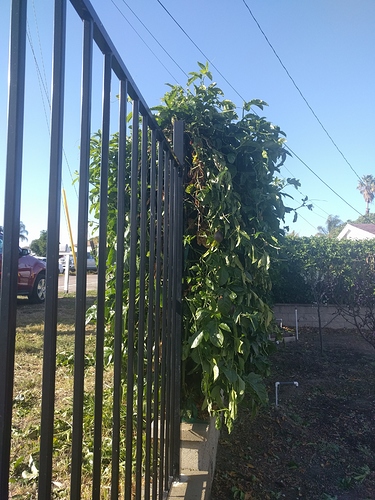 It’s about a foot thick on each side of the fence.

How many plants are these?

Would that one plant cover more fence? Looks great. I have a wall to cover but it’s only 3 feet tall.

Passiflora “Frederick” is a vigorous cultivar. Seeds of P. edulis were treated with a restricted use hormone, then propagated. Those that germinated were grown on for a few years and narrowed down to a few individuals. The ultimate selection was so successful that it was picked up by La Verne Nursery for commercial propagation (by cutting). In addition to vigor, the fruits are quite large in comparison to P. edulis propagated by seed. In moderate zone 10a conditions (perhaps a dozen brief trips below 32F per year), a single plant under good cultivation can easily span 100 feet of chain link fence in 3 years. To grow it on a wooden fence would be an error: it would rip it down. 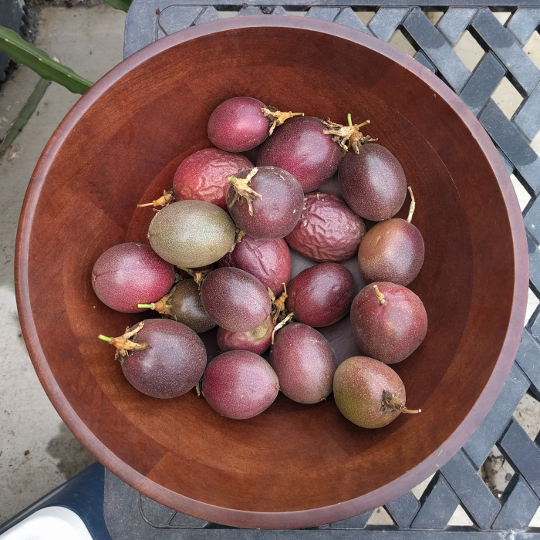 Did those fruits fall to to ground? Brady

Did those fruits fall to to ground? Brady

Yes, that’s how you know they are ready for harvest.

I would like just one small section in my orchard that has your temp zone so I could grow those fabulous passion fruit. One of my all time favorite flavors. Lucky you!

MrsG, I have those temps but no 100 ft long wrought iron fence

I “keep” mine to 40 feet long, 7 feet high, and 3 feet wide by pruning monthly with a hedge trimmer.

Very nice, Richard! It surprised me that you have fruit this early, even for your location. The naturalized passiflora vines here have only recently started appearing for the year.

My Frederick was newly planted last spring and made a few flowers shortly afterwards. It was the end of summer before it decided to really start putting out blooms and making fruit. The days were becoming shorter, and the angle of the sun lowered to the point that the vine received insufficient light at that time of year to fully ripen the fruit before I dug Frederick out to transfer to ‘her’ winter home.

Maybe by starting this year with its much larger root system and thicker vine. mine will be able to produce fruit for me to enjoy, too. I’ll won’t ever harvest a bucketful at a time, but hope to eventually enjoy gathering a large bowlful like yours.

What variety is this? Saw it along a wooden fence on a public road. Beautiful flower! 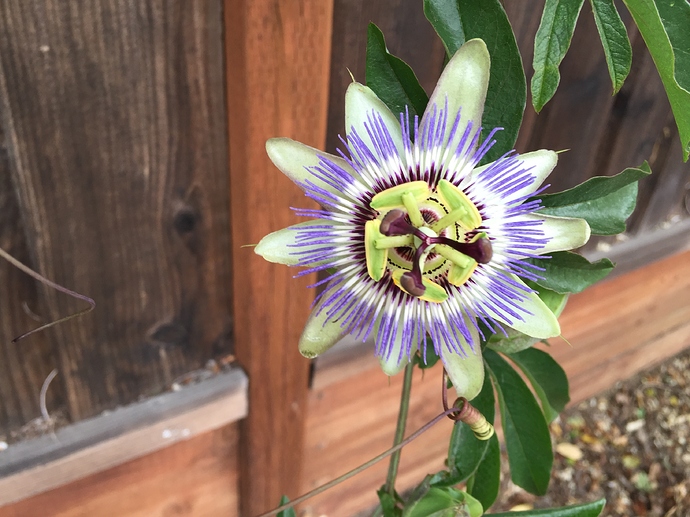 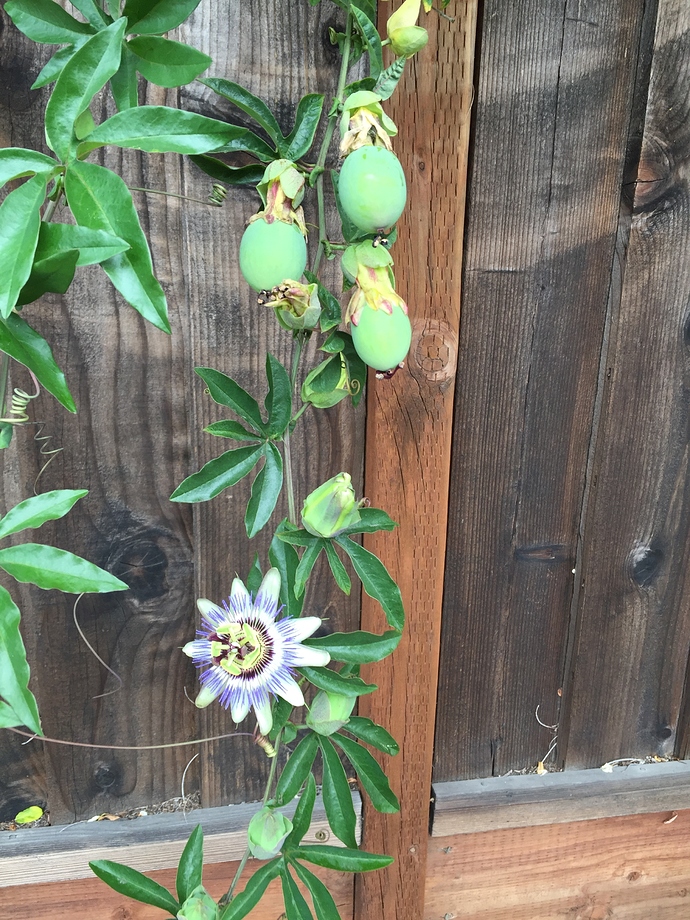 Are the fruits hollow?

They weren’t ripe. There was one fruit lying on the ground. I tried crushing it with my foot but it was too hard.

Ornamental passifloras are popular in California. The fruits are generally hollow.

@Richard, how much water do you apply to your ‘Frederick’ ?

It is on the same schedule as my fruit trees. During this time of year about every 10 days unless there is significant rain. For example I watered a week ago, but given the 3/4" of rain this weekend I’ll postpone the next watering until next week.