My wife, who isn’t really interested in fruit trees, found some pawpaw seeds that were stratefying in the fridge for a year.

Well now they’re 3" tall or so. I’m thinking separating them could be a problem.

We have long, slow to warm up, rainy spring. I’m inclined to go plant them outside this weekend, together, and cover with a 5 foot tree tube. 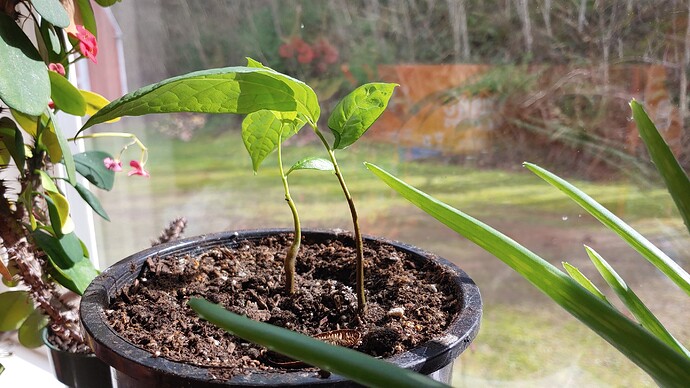 Too bad you didn’t put the seeds directly outside… but maybe hindsight is 20/20.

I hope someone has some good advise for you and that you update this thread with a good report in the fall. Keeping an eye on this thread.

Frost will kill the new growth. I’d hold off on planting.

I would try to put them into dormancy, if you think you think you can do it in time. There are still 2-2.5 months until they leaf out naturally. If you have space in your fridge for 6ish weeks, you could probably pull it off. They could start their second leaf this Summer.

Other than that, I would be worried about damaging the roots during transplant. If the pot is too shallow, maybe transplant indoors for another 2 months. I have to wonder if the ground is too cold right now for a heat loving plant. The shock may be too much.

It looks like they are inside,by a window.That’s okay for now,especially if the glass has some UV protection built in.
I grew some and they sprouted,this time of year.They were kept under a fluorescent lamp,in a tub,with bottom heat,until it warmed up outside.

Wait until it’s not going to go below 30 F to put them outside.

They were in small tree pots and 2 liter plastic soft drink bottles.I either put them outside in a shaded area or in a greenhouse with UV rated polyfilm and grew them out that way,for a year or two,then they were put in bigger containers.

@Bradybb Then what? Are they planted in the ground growing? Met a gruesome fate? Sold to somebody else?

I gave some away.They are in about four different states.Tony in Omaha,probably still has one.
At least two are in pots at my place.These were seeds from Bill Merrill’s place,when he lived in Fremont,CA.
Some others were grown from seeds of the Kentucky Champion,sold originally by Woody Walker.One tree in my yard is about six feet and had a few flowers last year.Tony also has one and he said the tree was over seven feet,either last year or in 2019.
Also,a number of years ago,I traded some KC seedlings with a lady on Garden Web,from Sacramento.I went to the CRFG exchange there last year and there were scions on the table,much thicker than a pencil,of that variety.I remembered her name later on,as she was one of the hosts.

I agree with the others , best to wait until it reliably warms up.
Also being that size ,it will be a challenge to hold the soil on when transplanted. Not a lot of fiberous roots there.
If the soil falls off the roots when leafed out like that they will likely perish.
Since they are already growing good this early , given good care they could put on a lot of growth this year.
Maybe best left in that pot for the year ?
Or cut the bottom of that pot gently this year ,planting on a mound ? ?
It has been recommended to put 2 pawpaws in the same hole for better pollination .so that can work

In my Edible Landscaping book by @MichaelJudd, there is a photo of “twin” pawpaws place right beside each other like your seedlings in someone’s yard, probably about 10 feet tall and looking very healthy.

I had an NC-1 that I thought had died, so I planted a seedling right beside it to take its place. It turned out that the rootstock was alive and well because it sprouted leaves towards the end of the summer so I am trying to figure out how to approach that situation. I am leaning towards leaving both in place and seeing what happens.

I realize your post is more geared towards the weather and planting outside, so if it was me I would wait a bit longer and leave them inside until frost danger has subsided, and plant them out. It’s not too far from their normal leaf out time, so I’d say worst case scenario they regulate to a “normal” time next year.

I generally don’t take care of the houseplants, and this is mostly an afterthought. I’m hoping to give it a chance by getting it into its final place as soon as reasonable. Seems like the smaller it is, the less chance of damaging the roots at transplant.

Hopefully it will stay happy inside until its both warm enough outside, and I have enough spare attention for it to get transplanted at some point.

Thanks for the responses.

I have found pawpaws very forgiving when being transplanted
as small plants under one foot tall…in warm weather after they have leafed out.

Even taking a one gallon sized pot with 3 or 4 and dividing them into one seedling per pot…and some of them losing all dirt…seem not to be an issue. Even in mid summer.
(Now, keeping them in shade or at least part shade with regular water–that I’d consider more important than keeping the dirt on the root of a small paw paw plant.)

Taking them from indoors to outdoors too early and letting the new foliage get frozen does not seem wise. But if you have plants to spare, try it with one or two and take the risk if you’re so minded.

Just wanted to echo @disc4tw – I picked up some Paw Paw seedlings from Edible Landscaping in Afton, VA this winter and some had 2 in the tray. I was chatting with an employee, perhaps the owner, and he mentioned it’s totally fine to plant 2 next to one another, particularly if you’re desiring a more bush-like growth habit. I’m trying to keep mine dormant (they are in 2" starter pots) until I transplant them into bigger pots and move them outside for summer. My plan is to grow them in fabric pots for this season and finally transplant them into the ground in the 2022 season (Zone 6B).

I like your advice, both being what I want to hear, and based on experience

I’m hoping the tree tube will be sufficient for imparting the shade they need.

These are essentially found trees. I don’t really have a place to put them yet. I’ll probably put them somewhere in the open. Still need to find space for 5 or 7 other trees that are a higher priority, and only 1 spot really ready to go. I have a North facing slope that will eventually get fruit trees, but still has some stumps that need to get ground, or otherwise taken care of and I don’t want to congest the areas around them and make it more difficult to remove them and/or mow around them in the meantime.

With these I’m more concerned with getting them established and above deer browse, than shaping them, and pawpaws need shade when young. So they seem great candidates for tall tubes rather than a cage.

The forecast models are really unreliable two weeks out, but there have been consistent signals in the last few model runs for another cold snap in about 2 weeks for the PNW, so I’d say wait until mid-March… I am somewhat regretting planting out my loquats and mountain cherry guavas yesterday, hopefully the models shift warmer over the next couple weeks. 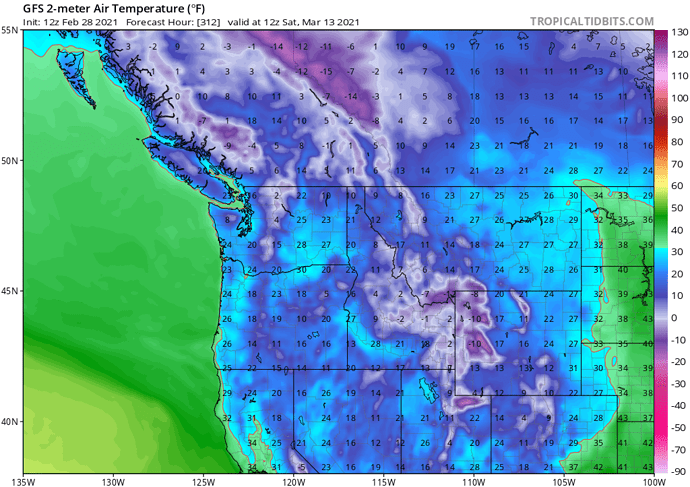 Thanks swincher. I planted a couple of loquat seedlings out a couple of months ago, so they went through the 22 degree night a couple of weeks ago. I’ll see how they hold up.

I hope it doesn’t get that cold again. My Nadia cherry plum, and Japanese plums may be blooming, or close to it.

Doesn’t look like even the worst model runs are anywhere near that level of cold, just a more mild frost, but possibly sub-30°