A LOT easier. I got some this year…and saved seed. Don’t know yet if a fluke and maybe related to weather…or if it’s a trait that is there every year.

Oh yeah. It’s definitely a big difference. Not quite the same as a freestone vs clingstone peach, but it’s an improvement. I made a lot of intentional crosses with freestone pawpaws this past spring with the plan of growing out a bunch of seeds to see what they produce.

Not a lot of buzz about the freestone ones but I feel like this is quite an important trait that should be part of breeding efforts.
I’ve yet to eat/observe one though.

Awesome, that’s good to know. I hope your seedlings do well for you!

Thank you! It looks like a good fruit. Are you growing other varieties as well?

Wabash, first and only this year. The color was off. In reality, it has nice medium yellow. Texture was not as soft as Shenandoah and held together better. 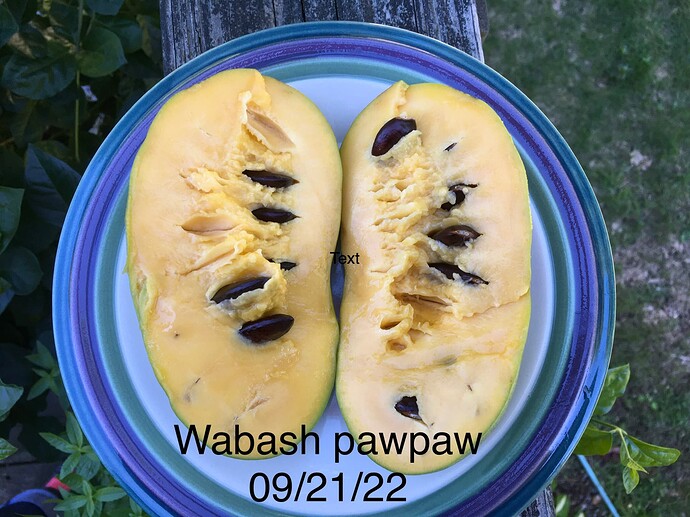 Sweeter and more flavorful than Shenandoah. I cut it up and gave to two people. One friend said it tasted “peachy”. The other has not report.

Woody Walker I believe described KY legend as peachy. So this makes one other person who says that a pawpaw can taste peachy. Interesting.

Not nearly as big as all the cultivars I see in this thread, but I got some nice ones on a walk by the Potomac today. I actually thought I was too late in the season, but there were still a good number hanging. The section I walked is practically wall to wall pawpaws and there were some on the ground, but most that I picked up came from just grabbing the trunks and giving the trees a little shake. A helmet may be a good idea for this in the future, but I didn’t get hit by any falling ones. The downside of this technique is that they all get bruised and get soft quickly.

Every fruit I tasted was quite good, but I’ve never had one of the improved cultivars so I may just not know what I’m missing. 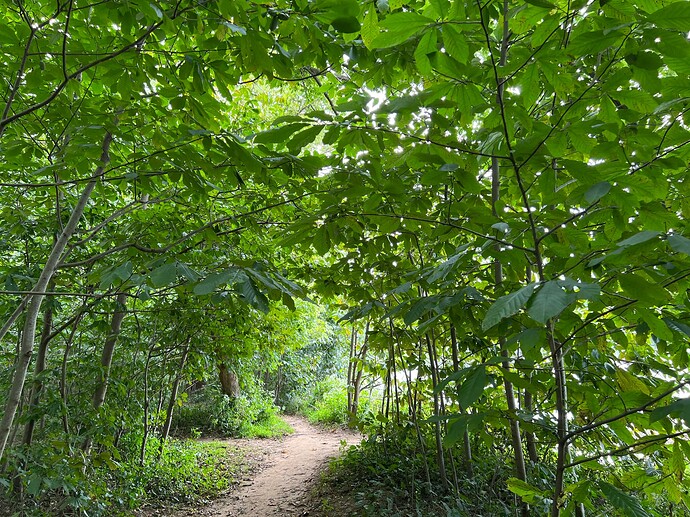 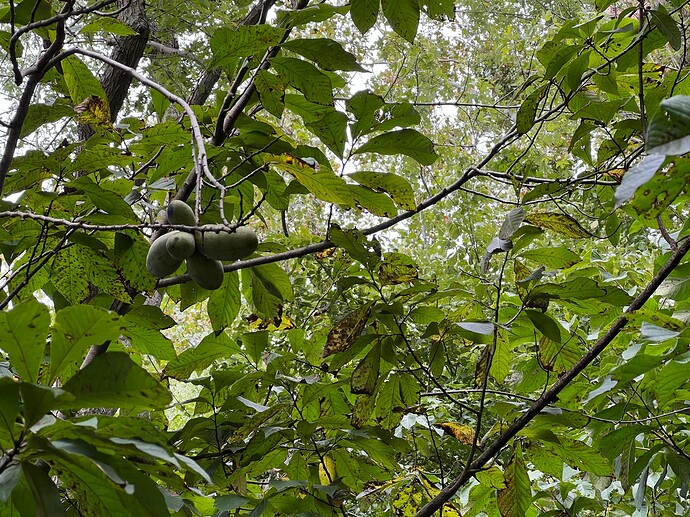 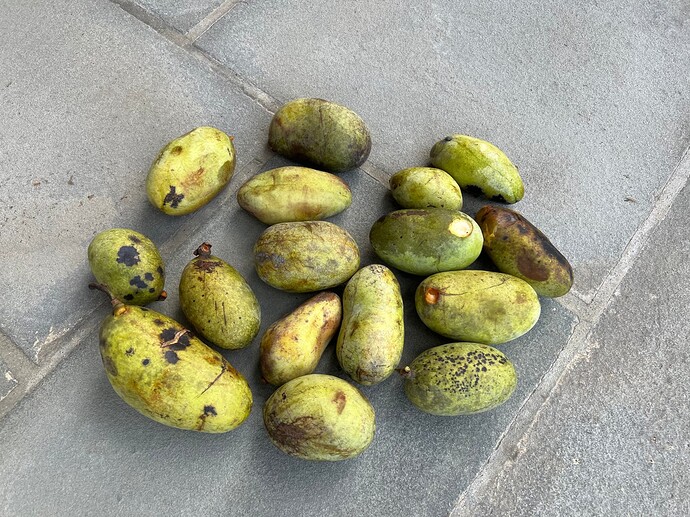 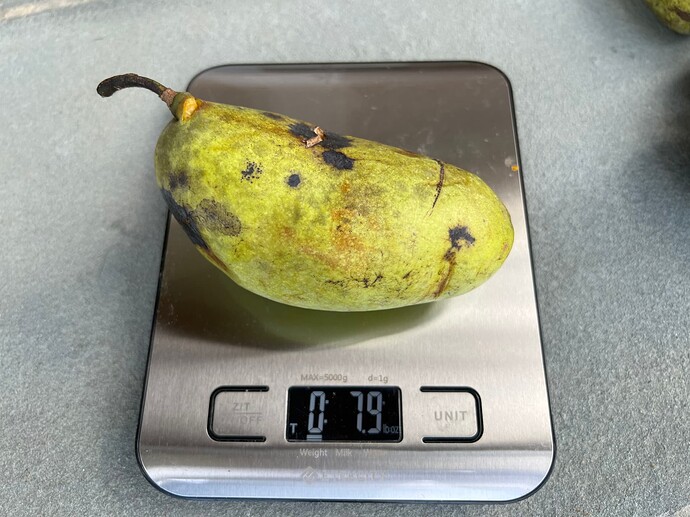 You do realize that you have naming rights, right? Call it what you’d like. I’d suggest “Hambone’s Pleasure”

Did not realize that. Edible Landscaping called it “Select Seedling.” I like to give EL credit whenever possible as I’ve been buying from Michael for 40 years or so, and love his operation. I remember when he began selling from his backyard in a DC suburb, dreaming about bigger things.

Alright, so I received an overnight on Thursday night/Friday morning of some known varieties and wanted to comment on the tasting between myself, @urbangardener and @jaunders1 this afternoon. @TrilobaTracker @JustPeachy you guys may be especially interested. Keep in mind this is a very small sample size.

Varieties sampled were as follows

Garage West - 2 fruits, one had a rotten area but still tried to work around it. Sweet with a floral flavor that I believe approximates violet.

Garage West for us was very good. I think for myself it was the winner. It was the largest fruit by probably a factor of 2, maybe 3 or more in the case of some others. Others have described it with various comparisons, I didn’t pick up on violet. I could see a hint of coconut as some have mentioned. It was just a mild taste, relatively firm texture, very pleasant and enjoyable to eat. The seeds were commented on by myself and @jaunders1 as being very large, a sign to me that seedlings will likely also produce larger than average fruit. n=1

Similar response for myself. Until I tried Garage West I think this was my favorite. Allegheny was smaller, more seeds than some others but very good mild pawpaw flavor. Probably #2 rank for me today. n=2

Shenandoah as others have said was mild and the easiest going. Think of it as the light beer of pawpaws, not a standout for flavor but definitely a good overall choice. n=3

NC-1 had a stronger but not offensive taste. Dryer texture, faintly gritty but not unpleasant. Definitely worthwhile if you like stronger flavors. n=1

Wabash- not bad, middle of the road flavor. Definite improvement over most wild taste. n=1

Central - kind of similar to a wild fruit in size and taste. n=1 so possibly not the best example.

As I try more I’ll update with any changes as needed. 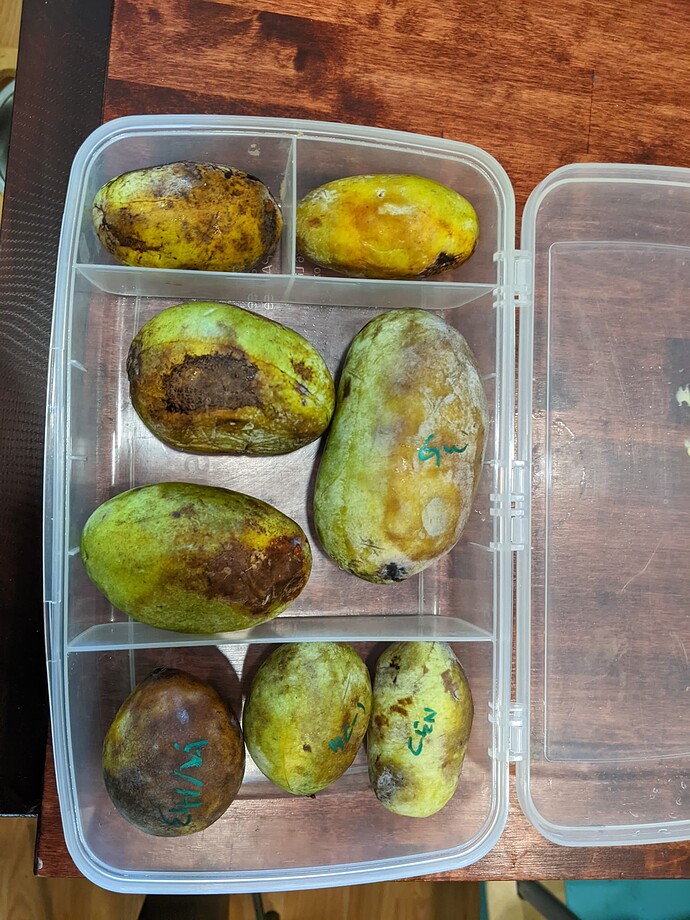 Light beer of pawpaw is like saying light oatmeal stout. It’s one of the mildest of pawpaws, but still very much a pawpaw.

Select seedling just means it came from pawpaws that had named cultivars as parents, but he’s probably not sure which ones. You can name it and I’m pretty sure he wouldn’t care a lick.

I agree with you on that 100%. It’s very good, I was just trying to think of a good way to reference it. I’m glad to be growing that one.

Yes. This is the lingo everyone in the pawpaw growers association knows. It just means it’s not wild. Doesn’t mean it’s a specific thing other than not-wild. I will point out I know of at least two nurseries that harvest “select” seed from wild, even though they would claim otherwise if confronted. They justify by saying it’s seed from cultivars “they selected from the wild.” It’s all tosh imo.

Most of the nurseries dump all the seed into a single bin and call it “super select”, “select” or whatever buzzword adjective. There’s as good a chance of having an NC-1 seed as there is an Atwood or something, even though NC-1 is technically also a wild pawpaw (first gen), whereas Atwood was the 3rd generation cross.

The only people that have routinely specifically sorted seed based on the known mother parentage are maybe Cliff, Jerry, and maybe myself. It’s a tedious process because you have to sort and keep all the seed from each cultivar separate and labeled. 1 five gallon pale of pawpaw seed with membrane fermenting away is already very very smelly. Imagine 10 of them or 20 of them if you grow a lot of cultivars. Jerry though took it one step further. He didn’t just sort based on fruit cultivar, he also sorted based on pollen donor because he hand pollinated and was continuously experimenting with breeding.

Garage West for us was very good. I think for myself it was the winner. It was the largest fruit by probably a factor of 2, maybe 3 or more in the case of some others. Others have described it with various comparisons, I didn’t pick up on violet.

I wouldn’t make so much about size. We don’t thin as much if at all (which we should to attain proper size). Many cultivars like Allegheny are naturally smaller but attain decent size. My own Allegheny tree throws fruit the same size or larger than the Garage West I sent you from my friend’s. The problem is that the effect get’s compounded by the fact that many (if not most) cultivars tend to overcrop/overset.

The weather this year was also weird, which I think caused early fruit drop/ripening, before most got to their proper size.

I did a Mango crossed with Kentucky Champion seedling this year and collected 15 seeds. I will grow them out and will update the result down the road. Hopefully the fruit will be large and good.

Mine are, JBG x Maria’s Joy, Allegheny x Maria’s Joy, and Taytoo x Allegheny. I am going to take the shortcut, grow them out and graft them onto mature to get early fruit.

@JustPeachy Please say more about “membrane fermenting” of pawpaw seed. Is this in addition to removing all traces of pulp?

I don’t know how the all the nursery guys do it like Cliff, Jerry, John, etc… (mainly because I have never bothered to ask). I am just doing it the way I saw someone else from the growers association do it (whether it is the right way I don’t know). The way I do it just seems low effort, which is why I do it this way.

If I am not eating the pawpaw (or reluctant to do so), I just remove the seed from the pulp. The seed membrane is usually pretty tight to the seed, so I just let them sit in a bucket of water for like a week or month or whatever and rub them off under water later. The fermentation just makes it so the seed membrane separates like jelly. This is how I process a lot of pawpaw seed at once.

If you’re eating the pawpaw, well, most people just eat the seed membrane…