Peach and Cherry recommendations for Zone 6B?

I live in the Finger Lakes region of New York. Next year I plan on putting in a peach tree and a cherry tree next spring. I probably will turn the peach tree into franken tree with different varieties of peaches and plums. It will go next to a fence, maybe 2-3’ away or so. Cherry tree will have more room.

Last year I ordered from Cummins Nursery and was happy with what I got, so I would be inclined to order from them again. For peach they have Krymsk 1 (40% side of seedling) and Mahaleb (60% standard). Both seem OK for my purposes.

Anyone have any varieties peaches or cherries that they love or rootstocks that have worked for them? Will cherries graft on to bush-type cherries?

2-3 feet is very close for a tree. I don’t even think many bush stay that small. You will need serious pruning on that side to the point there is no branches facing the fence. You can’t go wrong with the classic Rainier or Bing cherry if you get both varieties grafted on. Other highly esteemed varieties are black gold and white gold. For peaches if you can get a peach to pollinate it and have the season I would go Indian Free. Redhaven is considered the standard for peaches now.

You can go wrong with growing Bing and Rainier in the east. Rainier is not that cold hardy. Bing cracks badly.

If people in the east coast can grow those two varieties successfully, we would have commercial growers here growing them by now.

I don’t understand anything about elivings1 reply to your question. You indicated you are very low on space and can barely fit 1 peach and 1 cherry tree in your place, yet he suggests one of the very few peaches that needs a pollinator, meaning you now have to find a place for a whole other tree just to get fruit from the Indian Free. Also, of the 24 or so varieties of peaches I have grown, I’d put Indian Free almost at the very bottom of that list. But perhaps that is subjective. And when most people can only grow one peach, they want a traditional, sweet yellow peach- not a white(ish) peach with extremely heavy fur and sour taste. There is a reason it isn’t a very popular peach. Some people do like it, but most I’ve known do not and if you only grow one peach, I doubt you want an oddball like Indian Free or Indian Cling (I have both but am not a fan). I also don’t know why he says you “can’t go wrong” on the east coast with Rainer or Bing. Countless people here on this very site have found that to not be true at all, its well established that both of those have issues as described above by Tippy, In fact, you should be warned now that almost any sweet cherry is going to be a challenge where you are.

I would agree that Redhaven is one of the peach standards, but I’m not sure what was meant by “Now”/ Its been the standard by which ripening dates for most peaches are compared and given, and it has been since the 1950’s when it really took off and proved itself (released in 1940’s by Michigan I think).

Good luck with your new trees, whatever you choose.

My only caution would be that grafting peaches is difficult and top working is easier said than done.

This spring, I grafted 30 stonefruit scions to three varieties of rootstocks and I think 4 took.

Last summer I chip and t-budded probably another twenty and maybe 3 took.

In contrast, my apple grafts have done very well…I guess don’t plan on immediate success with your peach grafting.

Yes, but I would prefer to avoid it.

Re peaches, I’ve had very good success here with Redhaven and Early Redhaven. They ripen in succession in late July and early August. I spray once a year with a dormant oil combined with copper sulfate. The varieties don’t seems especially susceptible to peach leaf curl but the copper keeps it under control.

How about Plum Curculio and OFM, are they leaving your peaches alone?

I haven’t seen OFM at all. I know what it looks like because I had a problem at a prior house 50 miles away. But not here.

There is plum curculio but I haven’t seen much damage on the peaches. I think they prefer apples and actual plums. That’s not to say that I have no pests. Birds do the most damage. I have not sprayed for fungus in the summer so I lose a lot of fruit to mold. But we end up with more than enough to eat ourselves and to give away to friends and family . . . . 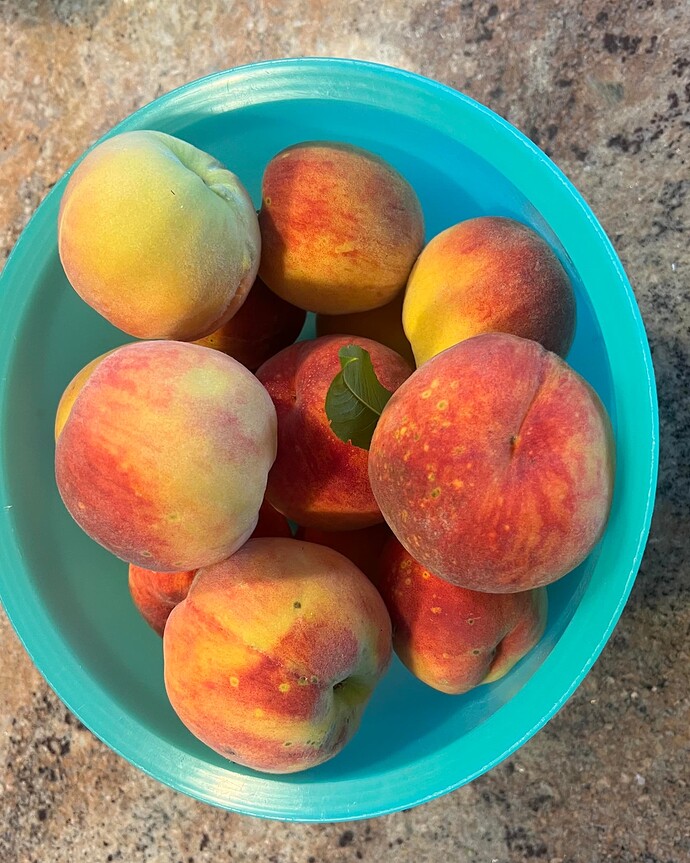 By mold, do you mean brown rot?

By year 4, brown rot affected every single peach on my tree at that time. I still struggle with some brown rot with good fungicide sprays.

I am impressed that such a disease is not severe in your area of RI? How long have you gotten clean peaches in your location?

Yeah, I think it is brown rot.

I think it helps that I’m near the water and there tends to be a breeze. So foliage and fruit are well ventilated. Also I prune pretty hard so the tree is open to air and sun. What I don’t do yet – but should! – is thin the fruit so none of them are touching. I may also spray more when I get other high priority work out of the way.

What products are you using and when exactly are you spraying them?

@Marco – It’s a horticultural mineral oil intended for dormant spraying into which I mix copper sulfate. For peach leaf curl, you have to spray before bud break. So typically it’s mid March.

p.s. I normally spray all my trees with dormant oil. In this case, I’m killing two birds at once using the oil as a sticking agent.

You are a lucky duck.

@mrsg47 used to live in Newport. Not sure she got brown rot on her peaches or not.

Yes I do like Indian Free, but
agree it’s for a small group of growers. Redhaven or a few others are a better choice for sure. Currently Indian Free is the only peach I’m growing. I’m more a fan of nectarines. Which are so hard to grow at times. The squirrels just love them!
I use peaches for cooking, for fresh eating I prefer nectarines.

Have you planted any fruit trees? If not, starting with peach and cherry will be a learning curve.

I am surprised that Finger Lake area is zone 6b. I thought, at best, it would be 6a.

Thanks for the answers everyone! I was thinking about just buying custom grafted trees but looks like I missed the deadline on ordering those. Whoops.

For the folks who have grafted peach/plum before, would buying a rootstock and starting to framework it, then grafting after the framework gets established be a good approach? I am figuring a few more chances to succeed this way.

All cherry and peach will struggle in the east. It will be a uphill battle either way. OP mentioned they were going to turn it into a frankentree and graft peaches and plums to it. It does not matter if it needs a pollinator assuming you graft another peach cultivar onto it like OP plans to do. I was under the impression Indian free was a outstanding peach. Dave Wilson nursery has it in their top 100 list.

I’d like to add onto what some others have said. First, if you aren’t an experienced grafter, you may be very disappointed with your success rates when it comes to grafting peaches. I’ve been grafting for about 8 years and I get about 15% of my peach grafts to work. Plums much higher, and apples and pears are in the 90’s. Peach grafting is HARD, as others have said. Also, if you have visions of just creating a nice peach tree with many varieties that you can just maintain and then harvest, it won’t be like that. WHile there are certainly people on here who have multi-graft peaches and do ok with them, lots of us get tired of all the maintenance and then dealing with those grafts that die in future years. Many varieties grow at different rates, so you’ll end up having to constantly prune some of them back several times a year while others won’t grow much at all. Then when one and then another graft fails a year or two or more later, you have to deal with a big empty section of your tree, and by then there is often no good graft position where you need it. I know we all love the idea of having many kinds of peaches and plums on one tree. Its a neat idea. But in my experience and that of many others (not all) multi-graft trees just aren’t the idealized option they sound like. You’d get a lot more fruit and much easier if you just picked one good peach tree and grow it out. The fact that your tree will be 2-3 feet from a fence is going to make it that much harder for you to have a good multi-graft tree.

Not trying to rain on your parade, just giving you some realistic and honest information to try and save you a lot of hard work and disappointment in the future, We have all seen those photos of beautiful, multi-grafted trees with different colored blooms and lots of fruit varieties hanging on a neatly balanced tree, and they look amazing. But like many things in life, they are mostly just nursery-created photoshopped pictures or are trees made and managed by true fruit tree experts who spend countless hours developing those trees. A beginning grower is unlikely to end up with a result to match those dreams and photos - though some here have done it. Good luck.