2018 turned out to be a fantastic year for peaches for me. My old Reliance peach was just loaded with fruit. We started picking August 10th and finished up on the 15th. The peaches were a bit smaller than I like but very tasty. I had “Help” this year thinning peaches and my helpers panicked when they say how many peaches we took off the trees in June. They learned their lesson this year when they had to can up small peaches. We ended up with 17 quarts canned, 1 peach pie, 6.5 jars of jam, plenty to eat fresh and still saved 30 pounds to make peach wine.

A few days later my RedHaven was ripe. It is a young tree but happy to get 9 jumbo peaches on it this year. It came by accident as I did not order it so the grower gave me a credit on it. Not sure how it will perform in Wisconsin so I planted it anyway. Some tip die-back this spring but it bloomed and bore some fantastic peaches! Very impressed on the flavor and size of fruit.

My last peach crop will be Contender in a few weeks. I never did get time to thin the fruit so they will be small (unlike last year). My children used to help on this task but they are all too busy with summer jobs so I lost my free help. 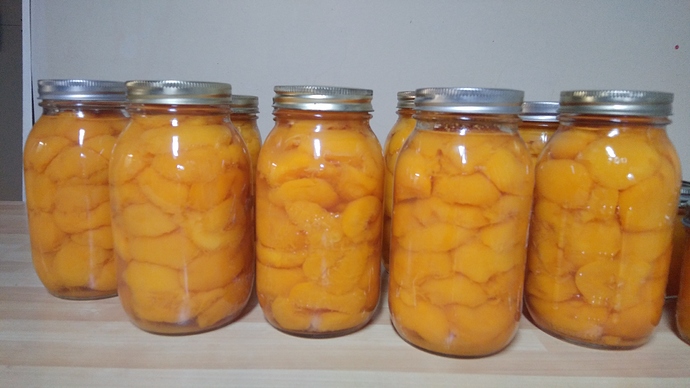 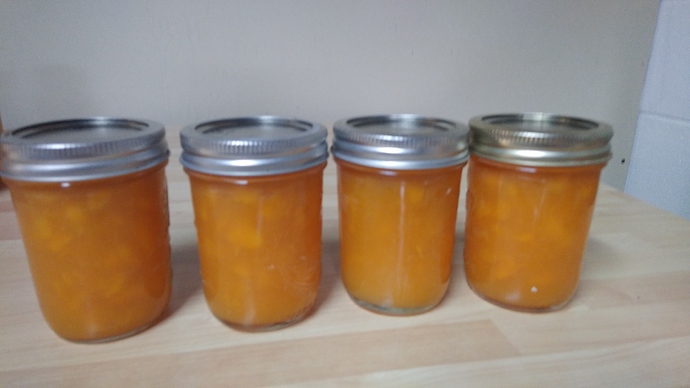 I guess I forgot to post the shot of my Redhavens. Here it is: 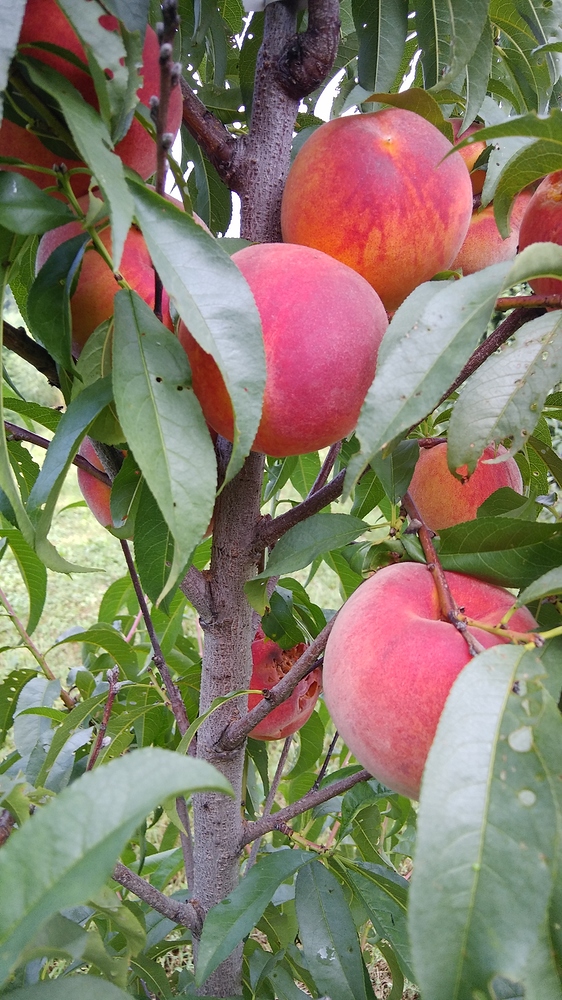 That is a fantastic harvest! Congrats.

Oooh, do you think I could pull this off in Rochester, MN??

Wow those look awesome! It’s a lot of work but WAY worth it when it’s over.

Our peaches got froze out for the most part, although I do have 8 on my Intrepid and about 12-15 on Madison. I’ve spent time putting an electric fence set-up around the Intrepid too, as it’s getting close. We got probably 10" or more of rain yesterday (spent the day in at my daughters house getting a foot of water out of the basement…) so I don’t know how they will taste, but they sure look good on the tree!

I’ve only had I think one Reliance peach on my young tree last year but thought it was real good, and this year there is only one on it as well, and the birds have been pecking it so like most of my peaches I’m looking forward to next year.

Some relation brought me home some peaches that I blanched and froze up, but somehow it’s not like doing your own tree grown fruit…

Glad you had a good year!

Generally, if Red Haven is in deep slumber, it can survive -25F and I doubt Reliance is any tougher survival wise. It’s flower buds are supposed to survive a couple degrees colder lows, but I bet you never realize that advantage. I don’t think Reliance survives colder winters than many other peach varieties and most of the types used by Michigan growers should survive in any Z5 through any but test winters. If you don’t want more trees, maybe you should start grafting the Reliance and spread out canning chores with better quality peaches.

Canning peaches in light syrup is also a great way to preserve and enhance bland peaches. I was little skeptical about canning melting peaches, but six months later they were just as firm as when they were put in the jars. The additional sweetness without the intense acidic peach flavor was different. I try to reuse the peach flavored syrup in drinks.

Thanks everyone for the kind words! My wife and I just ate the last Redhaven this morning. I honestly had a hard time eating another peach. We had so many that I am really peached out. Glad to take a break before the Contender is ripe.

The canned peaches were canned in light syrup and hot packed. Someone e-mailed and asked me about that. First time I hot packed as I always can them
cold pack before. I tried hot pack on pears a few years ago and felt they were
far superior than cold pack so this year we tried it on the peaches too.

I received a question too on the jam. It was made with sure-gel light pectin (pink box) and I actually reduce the sugar called for on the recipe included in the box by 1/4 cup. Nice fruit flavor, not too sweet and it still gels up just fine.

What do we do with all the canned fruit and jams? Actually they make really great gifts for Christmas, birthdays or other parties we attend. I never had a problem with having too much canned fruit or jam.

Looks fabulous. What kind of spray routine do you use?

I hope your peaches in Japan were good this year.

I find growing peaches in SE WI to be far easier than
apples and pears as far as pest issues are concerned.
I spray peaches far less than apple and pear crops.

Repeat sprays of Captan + Imidan every 7 days after petal fall up to
June 15th. Mid June is normally when our curculio issue tends to subside in spring.

After June 15th I spray Captan+ Imidan every 14 days up to July 4th.
I never spray after July 4th on peaches and they seem to turn out fine.
I also seem to be spared any issues with bacterial spot and brown rot.
Borers have not been a big problem either.

This is the first year Japanese beetles have been a problem on the fruit.
They were eating into any ripe peaches with a vengeance. I did have some peaches that had a damaged side or were so ripped into by the beetles that I could not use the peach. No complaints as I still had more than enough good peaches to harvest and use. I just hope the beetles don’t get worse in the future on my ripening peaches.

My trees are all 4 years old. Reliance were done a couple weeks ago, got about 2 five gallon buckets per tree. Contenders made no fruit. Red haven only made 5-10 per tree and they were golf ball sized. I’ve got one that I lost the tag on, it made a sweet white flesh free stone. It made about 20 peaches. Last to go is encore, and I’m thinking they’ll get about a bucket per tree. My wife is tired of them already so the next batch is for wine, or even a little further down that rabbit hole. I just sprayed the encore, and trunks of all the rest with permethrin this morning. Figure that’ll keep me from trying to harvest too soon and maybe keep the wasps off till they are good and ready.

The Japanese beetles were HORRIBLE here this year, in Ohio. I normally use just one round of beetle trap bags in each of the tree traps, perhaps two in one of them. Normally they last about a month. This year I went through 4 trap bags each and they were completely full when I took them off. They were pests for almost three solid months. I have never seen this bad before. I hope this was a fluke. I cannot afford to treat my whole orchard and yard. I have over 5 acres. Plus my neighbors fields had them just as horrible as well. The person at the hardware store could not keep the supplies in stock. They would get the Japanese beetle traps lures, and bags in and they were gone on a couple of hours. They said they had never seen them as bad as this year either.

I like your spray schedule. I just modified mine this year to almost the same as yours. It worked out great.