Hello, I live in Kentucky and this is the first year my peach trees have given significant fruit.

I don’t spray, but I thinned the trees and also plucked off any fruit that had bug damage. With the Redhaven, the bug-damaged peaches were becoming more and more common and as soon as a bug takes a bite of one, other bugs descend on that spot and soon that peach is rotting and turning brown.

Is it just bugs that cause this, or something else? I’d rather not spray and harm any beneficial insects. Not sure what to do, though.

Anyway, the fruit on the Redhaven is essentially gone now (or all brown). The Georgia Belle still has green peaches, but I’m wondering if something similar will happen to those.

Photos would get you a better response. For my Red Havens in Indiana, insects make them ooze clear jelly like fluid.

Peaches really need a lot work to actually get fruit. I was told; once you figure out the insects, then it’s the brown rot!

In most area of the country, Growing peaches without spray is difficult. There are too many bugs that damage peaches. The major pests are plum curculio, oriental fruit moth and codling moth and peach tree borers.

Both pests and diseases alone can ruin you peach crop. Together, they cause more extensive damage. Fruit damaged by bugs will bring on a fungal disease like brown rot more readily.

In short, no spray, a chance of having clean peaches is very slim.

Please post some pictures of the damage. If we can figure out the insect causing the damage it is more likely we can give you useful advice. Also some of the damage may be from brown rot or other diseases.

To be successful with peaches you need to be able to control brown rot and protect the fruit from insects.

To protect the fruit from insects you can: do nothing, spray Surround, bag the fruit, spray an insecticide or do a combination of these things.

Spray Surround- Surround is a kaolin clay and is not an insecticide. The clay acts as protectant and repels insects.

Bag the fruit- you place bags on the fruit when they reach dime size so insects can’t attack them. Depending on where you are and the insect species you may still have some damage because the insects will attack the fruit before it reaches dime size.

Combination example- spray 1 or 2 times with Surround or an insecticide and then bag the fruit. This protects the fruit until it’s large enough to bag.

To control brown rot you can plant peach trees resistant to brown rot and/or you can spray an organic or synthetic fungicide. Kentucky is hot and humid in the Summers so brown rot is going to be a real problem at some point when it shows up. Even with brown rot resistant peaches you will need to spray a fungicide. On the forum most people that start out with organic fungicides eventually switch to synthetic ones since the synthetics are much more effective and brown rot pressure is high in hot, humid regions.

I’ll chime back in after picking a dozen Red Havens. We used Trazicide and Captan at petal fall and every 10-14 days up to about a month before harvest.Some are clean of insects but in a small sample, 1 in 3 have a single worm! I hope the stats look better when I start the major picking. I’m thinking a peach with a worm might ripen early.

I did have several sprays that rain occurred a few days later. I would have sprayed soon after the rain but, it was still raining!!

If I was recommending a starting point to someone who wants minimal spray for peaches, I would say the first 3 sprays are very important. Then cross your fingers. I feel applying the last spray 30 days before harvest vs. 14 days as the product minimum, my fruit is “cleaner” of pesticides.

Sorry for the delay. Here are some pics. Basically an insect bites one spot and i see a little clear liquid coming out. (i don’t have a pic of that). Then it gets brown from that spot, then extends over the whole peach until dead. Happens one by one and few peaches end up any good. 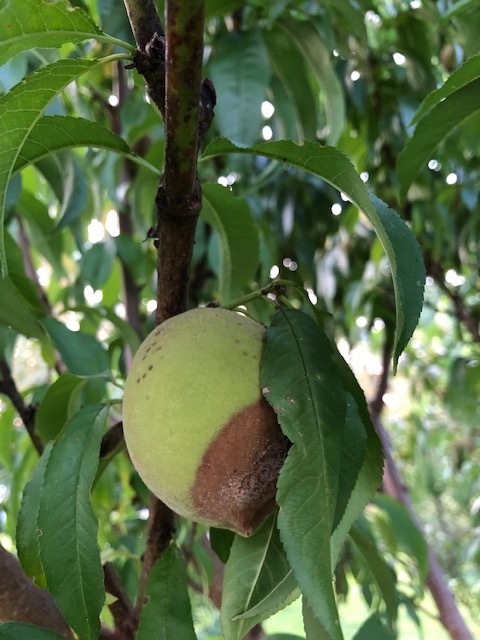 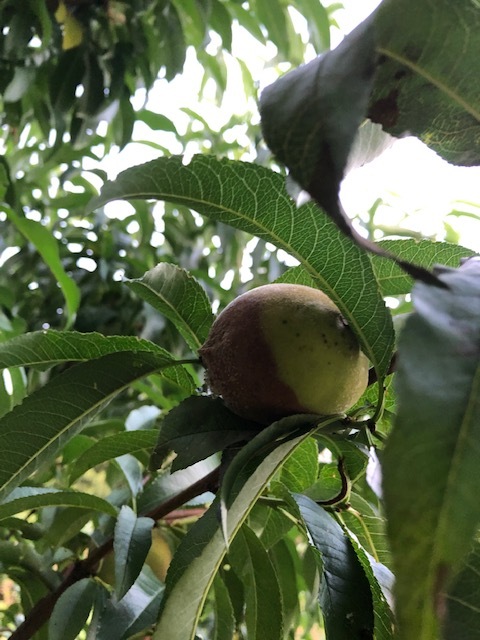 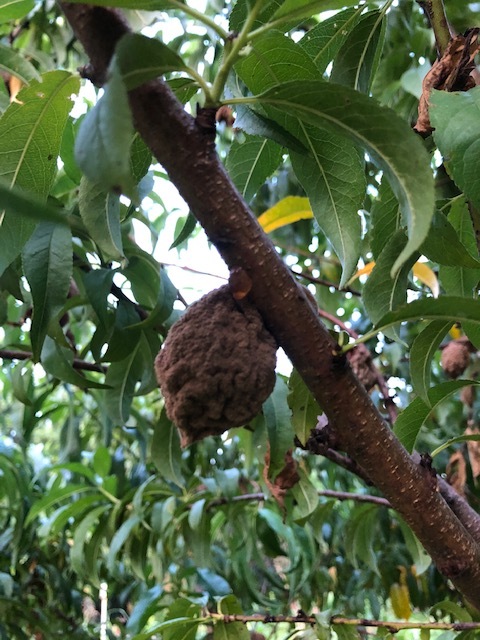 That looks like brown rot especially the “mummy” in the last picture. You may have some insect problems as well but I can’t see any obvious insect damage in the pictures. Also any physical damage to the fruit (including insect damage) makes it easier for brown rot to infect the fruit.

See this link from Purdue University (has pics and text)

If the crop load is very light it can be difficult to keep the insects out of the few fruit you have. As your crop size increases the problem should lessen. A switch from Trazicide to Sevin (the new formulation with zeta cypermethrin) may also help.

Brown rot is a beast. Destroyed my peaches last year. I sprayed this year but looks like I’m not spraying enough. As the peaches get ripen the rot descends to claim them.

What are you spraying for brown rot? What schedule for spraying are you using? 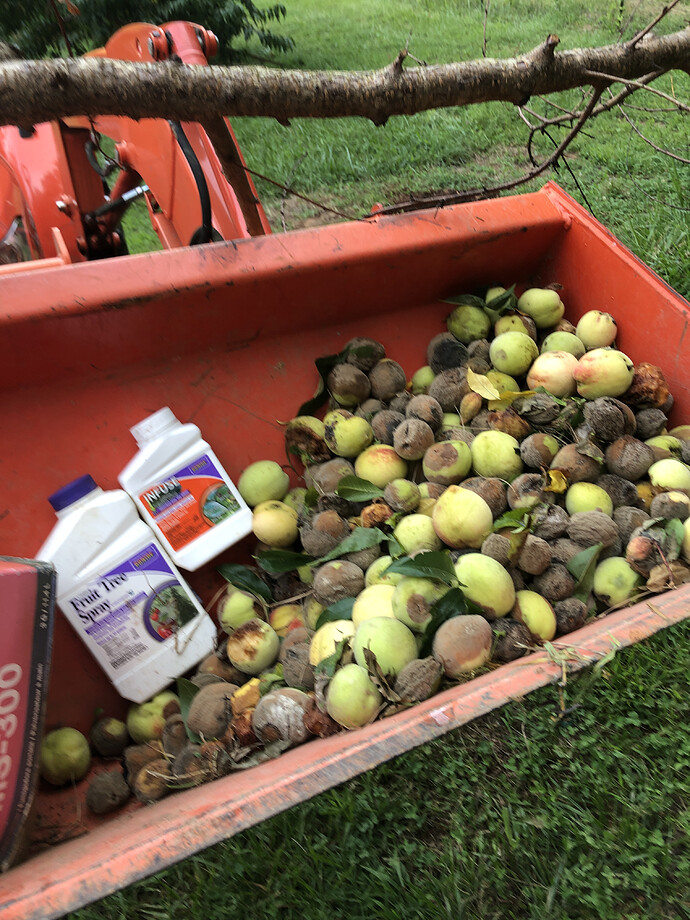 Alternating captain and infuse ~every4 weeks Not enough obviously

Infuse is systemic, still does not have any effective on brown rot?

Are you adjusting the pH of the spray water to be acidic when you spray Captan? Half the Captan is destroyed if the water is basic in less than 15 minutes. Also you need to spray at 10-14 day interval to keep active fungicide on the trees and fruit. If there are heavy rains you may need to spray weekly during that period.

If the pH of the Captan spray water is acidic then I would suggest mixing Captan with the Infuse for each spray and see if that helps as well as shortening your spray interval. Also are you buying the Captan by it’s self or is it part of the Fruit Tree Spray you have pictured? I remember someone mentioned that the Fruit Tree Spray doesn’t include Captan at the highest rate.

Look at this thread there lots of good info on preventing brown rot. Olpea has some posts in it and he grows peaches for a living.

As my later peaches are starting to get close to ripe, I’m seeing MAJOR brown rot problems- I mean major- on both the fruit and branch tips near infected fruit. I have sprayed Myclobutanil every 4 weeks and captan every 4 weeks staggered 2 weeks. So every 2 weeks my peaches have been sprayed with either Myclo or Captan. My fruit also has more peach scab spots than ever. I’m sure this is a crazy idea, but knowing how effective bleach is on mildrew and other fungi that can appear in a house or…

No it’s really my fault. I need to up my garden game, but other things get in the way. I’m Not acidifying the water. Spraying intervals too long. Not picking up ground fruit. Wet year as well. Peach Trees’s are from seeds so may be rot machine. May try a more resistant variety

My post in the thread I linked above lists the few peaches that are brown rot resistant. But I don’t think the resistance is high enough that you can avoid spraying. Most peaches are susceptible or highly susceptible unfortunately.

Captan does need acidic spray water. It would be nice if they mentioned that on the label since it’s critical but they don’t. You would want to adjust the pH and check it with pH paper. A pH of 5-7 is okay with 5-6 being best. You can lower the pH with Citric acid which is found with canning supplies at stores.

Two helpful links for the importance of pH with spray materials

Effect of water pH on the stability of pesticides

The most common fungicide used in fruit tree sprays is captan. Unfortunately, this product is subject to alkaline hydrolysis. This is a process whereby certain pesticides will break down when mixed...

What is the PHI Of Captan? Can it be used closer to the harvest?

PHI of Captan is zero. Captan alone can use the day of harvest.

Thanks Tippy, my peaches can use some Captan

Indar should help with that, and it doesn’t kill all the beneficial insects.

Does anyone have a problem with Japanese beetles on peaches, or does the fuzz deter them. They’re into my nects, and I had to spray