I began taking some of the Redhaven peaches in earnest on 8/4 (I picked 43) and felt like I was being pretty selective - not all of them felt even close to ready but that all changes pretty quickly.

On 8/6 I harvested an additional 55 (I’m keeping track as this is the first full crop I’ve had on the Redhaven) but again, even two days later there were a ton that were still rock hard.

Then today, I wake up to this: 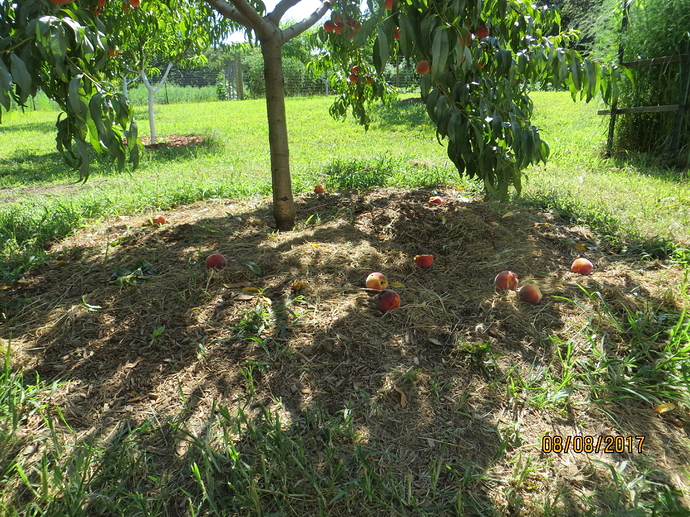 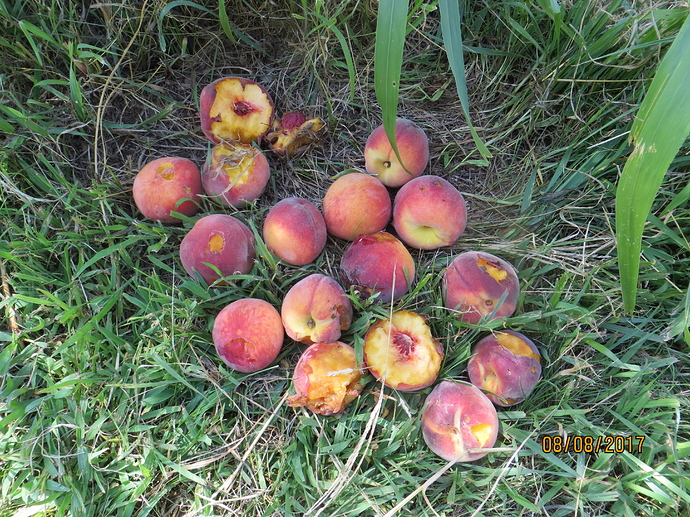 There’s 17 peaches on the ground with damage ranging from a little to a lot.

It is VERY aromatic around the tree right about now, and I felt like if I wait for the remaining fruit to ripen a couple more days I could have a disaster on my hands so… 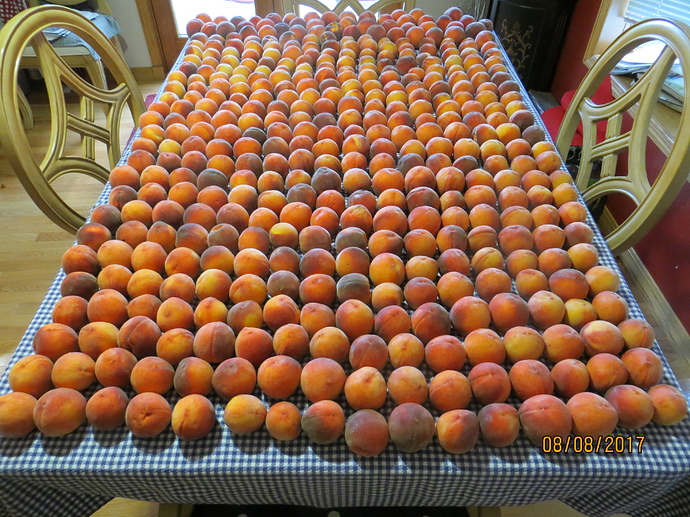 The total on the tree was 503, then there were 17 drop/damaged peaches.

Anyway, I reasoned that they could finish ripening up inside and I’d not have to lose sleep tonight over how badly they would be ravaged tomorrow.

Pretty sure they’ll not be AS sweet as if I’d have been able to let them stay awhile longer.

Last year we only had 13 or so if I recall that made it, and I took all them on the last day of July. Here we are on the 8th of August and I bet half of the 368 I took today could have stayed on the tree a few more days.

Oddly, a buddy who lives under a mile away as the crow flies that I’d planted a RH for three years ago, had a nice crop of about 125 peaches on his young tree and they were run-down-your-chin-juicy on 7/24.

Anyway, so frustrated that after seeing how successful the electric fence was at keeping out the deer from my BIL’s sweetcorn — I’m even pondering the idea putting up electric fencing next year, and then moving it from one tree to the next as they ripen in succession

Hoping I didn’t make a huge blunder taking the rest a little early.

Perfect looking peaches! I’m sure you made the right decision. I started out with that many peaches. But never even got to taste one ripe peach. I was down to 4 peaches under the net last week. I stapled back the holes in the net and hoped those would get to ripen. But yesterday I found out that squirrels took all 4 of them. I’ll take the net down and call it the end of peach season. Very disgusted indeed!

I picked mine too, a couple weeks ago. The squirrels were getting to them… I’d rather pick them early than lose too many to the squirrels.

I know the feeling. I have a squirrel that comes by on patrol at 6:15pm. (I swear it has a schedule). Right during supper. About 2 weeks ago it came through and stripped 2 or 3 fruits in just the time it took for me to come in from mowing and eat supper, and go back to finish.

I did the aluminum roof flashing + motor oil that Alan suggests (I don’t have grease on hand). Once I got it up, I had no more attacks from squirrels.

With your nice, long, straight trunk, I think it would work for you. But you might have to prune up some of the growth hanging close to the ground.

Interesting that you are a week behind me on Redhaven. I picked my first fruit on 7/30 – ones that were softening out on the ends of the branches. I picked them every couple of days, and picked the last of them today 8/08. I couldn’t get out for a couple days, and a few are over-ripe and grainy.

I usually don’t pick early but this year I’m getting much more problems with deer and squirrels on the fruits so I am picking early to at least get some fruit. If the top is at least not rock-hard they usually ripen up perfectly well, but you do lose some after that.

You should be able to protect those trunks with flashing, it will save your fruit in a future year.

In this context, flashing is rolls of aluminum sheet metal that can be purchased from hardware stores. The intended use is to water-proof joints on roofs and on the exterior of buildings.

Heck I get under 100 peaches on each tree, but I keep the trees very small. And I don’t really need more.I lose more than you and I’m happy with the percentage I get.

I started out with that many peaches. But never even got to taste one ripe peach.

Boy, after reading that I can’t even gripe at all. That there is a sad tale, sorry to hear that. So much time, effort, and hope goes into it - then they pull the rug right out from under ya

But you might have to prune up some of the growth hanging close to the ground.

I am for sure going to get rid of the lower hanging branches, they held some fruit this year but not next…

You should be able to protect those trunks with flashing, it will save your fruit in a future year.

My Madison has a ton of peaches still very green (I think Madison is rated like 24 days after RH) so I may just see if I can re-read the flashing thread and try that on the Madison yet this year.[quote=“Drew51, post:8, topic:12192”]
…And I don’t really need more
[/quote]
After blanching and cutting up and freezing some yesterday, and just now finishing making some Jam — I’m looking at a table full of peaches and wondering if I really NEED this many

(My back is hurting a little bit, but I know we’ll be happy to have a freezer full of peaches)

We’ll freeze and can some more, and will give to friends and family until they’re gone.

My wife posted some peach pictures on Face Book and people were wanting to buy them! (She’s not ready to part with them until our people are all peached-up!)

Yeah I have so many other fruits, I need to limit them. I plan on givng away most of my Arctic Glo nectarines which will be ripe any second. My favorite too, but I have so many. Thirty is enough to keep. I don’t really want to freeze any, plus my berries took all the freezer room, and tomatoes too! I need to make jam to make some room!

That’s a lovely site, Jerry. A table of peaches.

I like @Susu began with 50 Saturn and after a few weeks had passed only prior to harvest not a single one remained. I scoured my other Saturn which at the beginning of the season I found none on. but found one. It was hard but I picked it anyway. I wrapped it in a lightweight T-shirt and it took 4-days to soften. Was still pretty damn tasty. First peach I’ve eaten waiting 6-years.

I will be planting a Redhaven.

Well mine Saturn. I was so excited this year as you were I’m pretty darn sure!

But, they got us!

Flashing has worked for me EXCEPT when the target tree is close enough to a neighboring one that the tree rat can hop from one branch to another. Or if the branches are bending low enough to the ground under the weight of fruit.

Then I need nets, too

Nets did not work for me.eventually they figure out a way to make holes in the net and get to the fruit.
Flashing wouldn’t work either because they get to the tree from the neighbor’s fence. Tree is way too close to the fence. Next year I’m going to trap them and get rid of them. If that doesn’t work I don’t know what to do.

Well it looks like I’ll have to go to plan “B”, after watching a few YouTube vids of Squirrels and Baffles.

My RH lower scaffolds start at about 30" and Madison at 20". 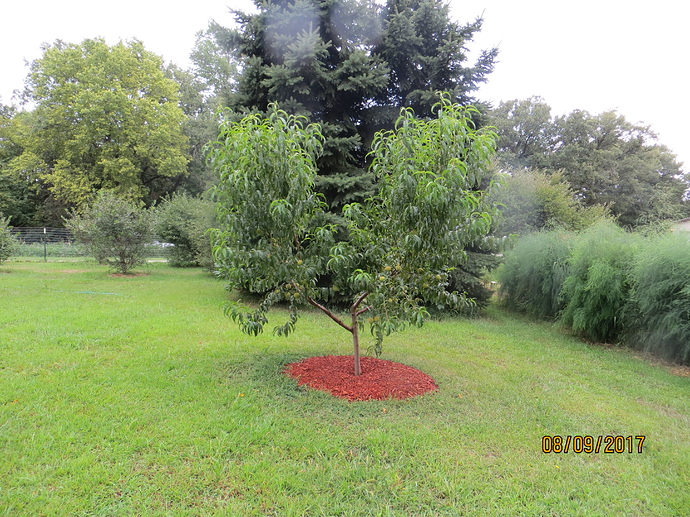 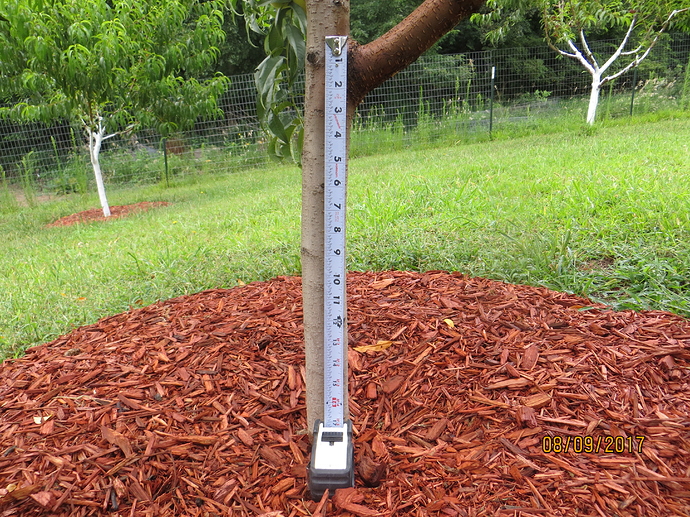 After viewing the determined tree rats on the vids, I think I’d be building a baffle only to have them jump on a branch and then use the baffle as a slide to double their fun

Don’t even know if it’s doable, but in my little mind I was envisioning something like putting the steel electric fence posts around the parameter, then running galvanized poultry netting around the bottom so I would be able to keep the actual electric wires significantly off the ground so as to not have to worry about short-outs. Then start with insulators and wire maybe a couple inches higher than the top of the chicken wire, and just repeat that a few times around the tree. (?)

Anybody have any thoughts on this idea? Am I overlooking something obvious? I’ve never had to do electric fence for anything before so it would be all new to me.

Here’s a shot of my PF17 that has a grand total of 6 surviving peaches after winter. I’d really like to taste this peach and I’m afraid that now that the sneaky li’l buggers have a taste from the RH, they’re probably eyeing these 6 as they’re next up… 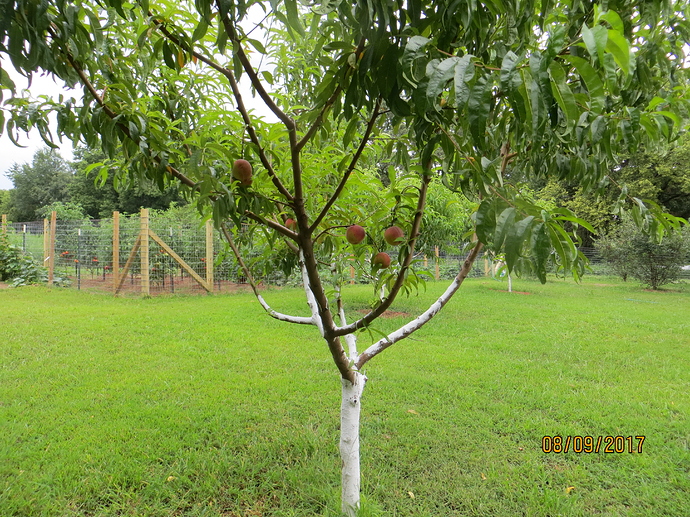 @alan is the baffle expert… Alan what would you do to baffle a tree like that?

Nets did not work for me.eventually they figure out a way to make holes in the net and get to the fruit.

Use better nets, i would like to see them rip a green American netting net. Branches rip out before it rips. I did rip one once, it got caught in my lawn mower. When removing it won’t rip either, as stated the branches will give before the net.
Maybe they could, but feel it would take too long, my dog may find them first. He is not always out, but if he is he goes for them. I also trained him to go after robins, but not sparrows.

Next year I’m going to trap them and get rid of them.

Why wait? Start now to reduce the population, and, find what works best to eliminate them.