I was thinking why bother since I got no fruit to protect anymore. But i see your point. Will order a lethal trap next time I order from amazon.

I hear they are expensive. But I will look into it.

I hear they are expensive. But I will look into it. Knitted Bird Netting is a great way to protect your garden from bird and other garden pests. Easily installed, stored and reusable yearly.

I’m thinking of making a PVC cage around my raised beds using a 30x30 netting, that one is pricey at 56 bucks, still not too bad.

I’d have to tie the scaffolds tighter together with string and make a huge cone, keeping in mind that they jump 4’. That is why I train them with a long trunk in my nursery- at least half the peach trees I manage are baffled although I don’t use them in my own orchard.

Thanks for the link Drew. Prices aren’t too bad. But $20 for shipping? Ouch!
But I will definitely bite the bullet and get those for next season. Much better than getting heart broken because at the end of growing season not even one fruit for the kids. Whenever my almost 5 yr old wanted to try a peach, I kept telling her they are still green but will be ready around her birthday (August 24) they would’ve been if we could keep one on the tree for that long.
But next year looks promising already. Couple of my plum grafts growing like crazy. I keep pruning them and they keep growing. Right now well branched and about 4 ft long. I have a feeling they’ll fruit next season and hopefully ripe faster than Elberta. That way I don’t have to protect them for too long.
Okay i should post this now, it’s starting look like one of thecityman’s posts

Just thought of something else. On my way to work, I drive by a peach tree about 2 minutes from my house. Basically in the same neighborhood. That tree is loaded with peaches, last week they were all ripe (at least had turn red/orange) i was amazed that they had no issues with squirrels like I do. Tree had no baffles, netting or any other protection but was loaded with fruit. No squirrels seem to visit that tree.
Today I drove by the tree again and noticed that a lot of fruit had rot! I’m only two minutes away and I’ve never had rot on my peaches. It’s amazing that two trees so close to each other have so different issues.

Susu,
Rot takes a few years to show up at a noticeable amount. Your neighbor’s tree could be a few years older than yours.

Squirrels are probably smart to go for good fruit than rotten ones. They have noses.

Drew,
Squirrels in my backyard chewed through my green American netting. It hurts me more as the netting is expensive.

No way does it cost that much! That does hurt, and not right.
I can’t say it will work for sure, but I believe it is the best net you can buy. I have 4 of them. Next time I will make sure to do a big order to lessen the postal blow!
I’m still using the one I hit with the lawn mower, it didn’t unravel or anything, only one corner is messed up.

I will be planting a Redhaven.

My wife took some to her office (she’s a Realtor) and left a couple on each of the other agents desks. Next day one of the agents texts her that it was the best peach he’d ever eaten.

I told her something to the effect of boy, he’s a politician. She’s like, well when he says it - that’s saying something beings he’s a chef. (The guy used to own a steakhouse here in town for years until he sold out and later began doing Real Estate)

Anyway after that conversation I was remembering some of the past peach threads (both here and over on GW) on how people in marginal peach country will carry on about a certain variety (probably Contender and/or Reliance) and folks in the heart of peach growing territory kinda smirk and are like… yeah you’ve not tasted a good peach at all until you’ve had this or that.

And I know that’s true too, it’s just that peaches for example aren’t as common here and like everyone says any tree grown are way better than most store bought.

So I don’t think these RH probably are the very best out there, but they’re for sure good enough for me, and are light years better than the ones in our stores anyway.

I agree. Olpea is my same go to source. He’s helped me considerably the past days.

I looked where you’re located on Maps and zoomed out and you and I are on a direct path to one another.

I added Red Haven, have to it was developed here, so of course! It’s the standard to compare all others. If another cultivar is better, you got something special.

The reason they get away with charging that much for a bit of woven plastic is that there is zero competition in the U.S. for precut 30X30’ woven bird netting. Even 700’ rolls with a 30’ width have disappeared from the internet. I used to be able to buy them and cut off 30 ft sections for less than half of what American Nettings charged for pre-cut squares even when they charged less. If I trusted the Chinese sources from Ali Baba I might risk an order directly from China. Now I just ask customers to order their netting from AN because I’d have to charge too much to make a profit on their astronomical pricing or sew 15’ wide netting together. That width is available in rolls for the vineyard industry.

@Drew51 and @alan does the netting from americannettings.com tear at all. The cheapo black monofilament netting tears when I try to take it off trees by myself. Just wondering how tough the American Nettings is? If you tried, could you tear it with your hands?

The website suggests it lasts 5 years. Drew you said you have been using it as a cage for your trees for 4 years. Does that mean it’s been outside the whole time? What kind of shape is it in after 4 years? Does it tear easily after 4 years?

does the netting from americannettings.com tear at all.

If I tried hard, maybe. it will strip leaves off a branch before it tears, it is the best out there.
I did tear one when the corner got under my lawn mower. I still use it, it does not unravel or anything.

Does that mean it’s been outside the whole time?

Yes, never been inside anything (shed, garage etc). I have had birds trapped in it by going under PVC. Often forgetting and cannot get out and I send them alone their way to birdy heaven. 3 this year.

I suspect an opossum or coon could tear it up. It probably can be repaired by zip ties, as I use them to hold to the PVC. Is it perfect? No, it is the best available though.

Just 2 days ago I removed from my Arctic Glo tree and I stripped a bunch of leaves, as I was impatient and just wanted it off, no damage to the net. I have 4 of them, the 15x15 size.

I have had tears in my Am Nettings nets. I think the blue Big Bugs netting is tougher, but I’ve had small tears in that, too

My black woven polypropylene 30% shade cloth doesn’t tear or snag. I’ve got some over a nectarine now. It’s a bit heavy to rest on the tree but has worked well for me. The trees recover and need pruning anyhow.

Mark,
I think it does not tear easily. I have been using it for the past 3 years.
It does not easily tangle with branches like the black, chaep ones from HD.

Mine got chewed a large hole by either a squirrel or a groundhog. The rest of the holes I made to set trapped birds and chipmunk. Birds have tangled in it every year.

I cannot rip it with my hands. It has removed branches from trees if I am impatient when removing it. I have been using some of the same netting for ten years now. I do not leave it out in the snow and sleet during winter. It is great stuff I also drape it over my raised veggie beds.

Well I think once they got a taste of the Redhaven they were hooked!

I’d taken all the peaches off the RH, but now I’m wondering if I shouldn’t have left a few on there as diversionary peaches, since I woke up to this today… 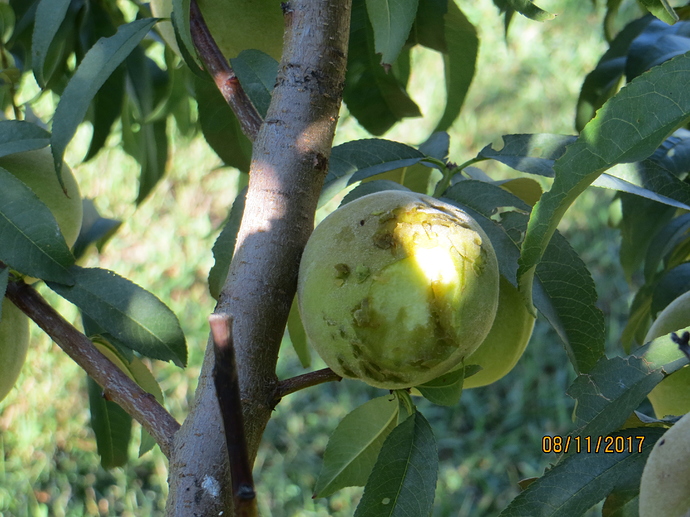 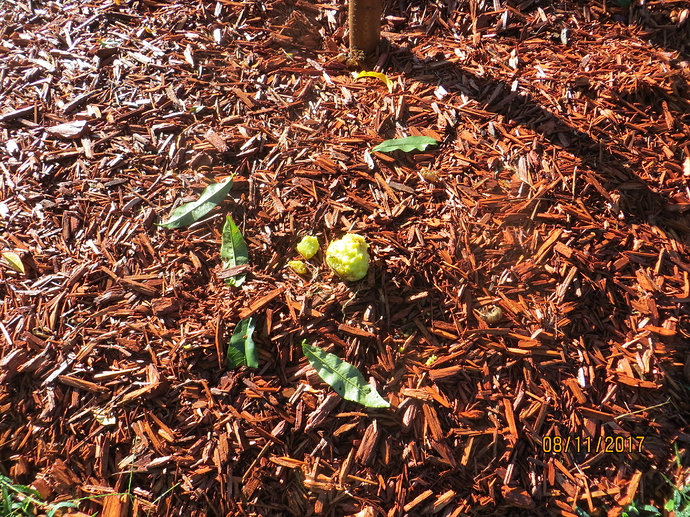 So I don’t know if it’ll do any good - but I did put up a little electric fence today. 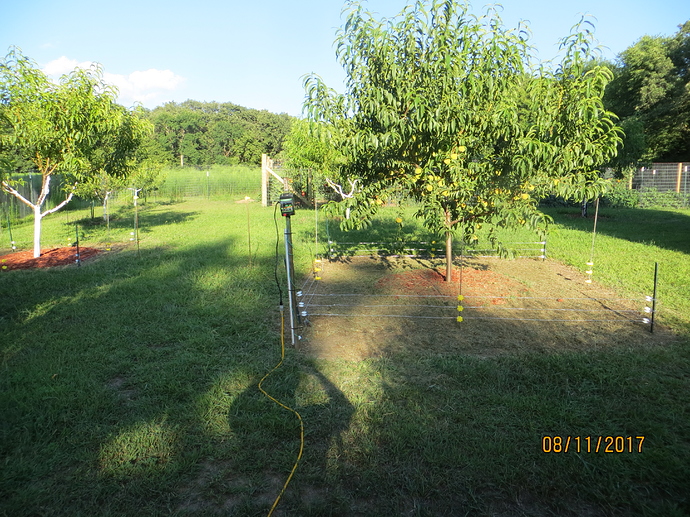 I jumped over to the PF17 (it has 6 that are close…) but I didn’t have enough insulators to run three strands.

If I can find my trail cam I think I’ll put it up using the video mode.