On a side note, the robins just split, leaving everything alone now??

When I had peach trees in my city lot the squirrels were a major issue. Now that my orchard is in the country, I have to battle deer but no squirrels.

I recall when I saw my first squirrel damaged peach I would bring out my hav-a-heart live traps and bait them with peanuts. It seemed I would catch 3-4 squirrels and then the problem was gone. Despite seeing many other squirrels, it always seemed like just a few were doing most of the damage. Once trapped and removed the rest of my crop ripened ok. Maybe I just got lucky. Never ending battle as each year it was repeated. Trap them out and more just move in from other areas.

it always seemed like just a few were doing most of the damage.

Well I wouldn’t doubt that at all. What tips the scales in my favor is that there are clearly no valedictorians in this years class of Squirrels

Once they had begun work on my Redhaven (by leaving the 17 peaches on the ground) I made the command decision to strip the tree ASAP, thereby denying them any more of the fruits of my labor.

Their response to that was to start in on my VERY green Madison tree (Idiots!) when there is a PF17 tree right next to it with 6 peaches almost ripe, and an Intrepid that has one lone peach slightly behind PF17.

So nothing has bothered any of the more ripe fruit so far, but these geniuses have fixated on the green peaches…

I bet even I could outsmart them that are misbehaving

Squirrels left the Shiro plums mostly alone [birds didn’t] but took after the Hollywoods as they got riper [along with the birds]. Pulled the netting off to get at the fruit.

Good news… couple of weeks ago I thought I lost all my peaches to squirrels. I was heartbroken. But today I discovered that I still have two peaches hanging on a lower branch of the tree! Squirrels haven’t discovered them yet. Hopefully they’ll get to ripe on the tree. Made my day!

Squirrels haven’t discovered them yet

That’s good news indeed! I’d probably go to the hardware store and get some screen door material (the metal kind…) and fashion a little protective screen shield around the survivors

I got to eat one Nectar peach this year for the first time in quite a few … it was at the end of a long limb drooping into an apple tree and the squirrels missed it. The birds didn’t miss it, it was pecked a bunch, but it still tasted great!

Squirrels haven’t discovered them yet. Hopefully they’ll get to ripe on the tree

Yesterday afternoon when I got home I strolled through the garden and for the first time found a tomato pulled off a plant by a squirrel, and just left there! 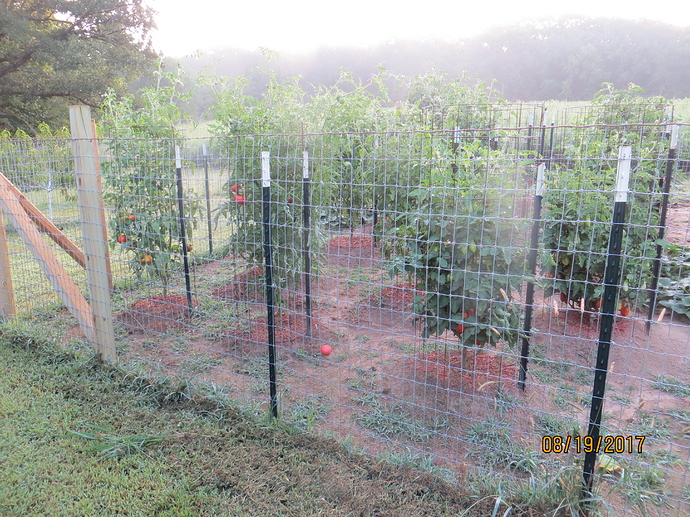 That got me to pondering "Maybe my electric fence thing is getting it done, and he’s decided to mess around in the garden and leave the peaches alone…

Once I had harvested the only 6 peaches I had on my PF17 tree, the electric fence wasn’t needed there, so I was able to pull it and use the insulators to add a couple more strands to the Madison electric fence experiment (Because I think the three wires I had were a tad too open, and with only the three wires I had a breech one day and found a green peach knocked on the ground) 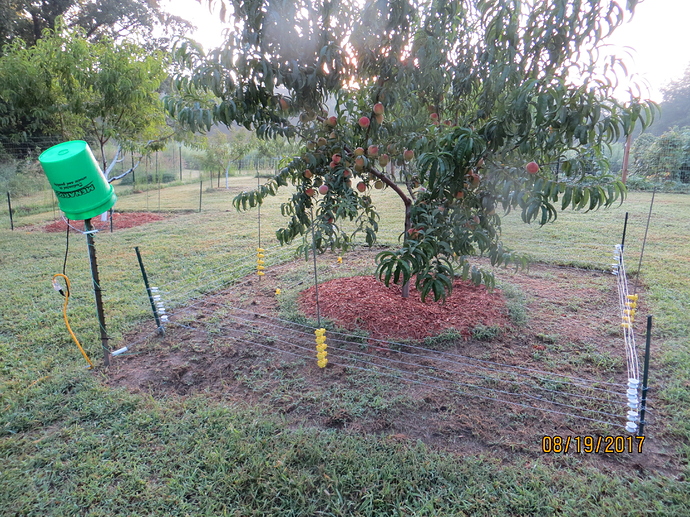 So after feeling like my 5-wire was probably very effective, I decided after seeing the downed Tom, that I better follow my own advice, and I fashioned a little chicken wire cage to go around the lone Intrepid peach that I so want to taste before Mr. Squirrel beats me to it 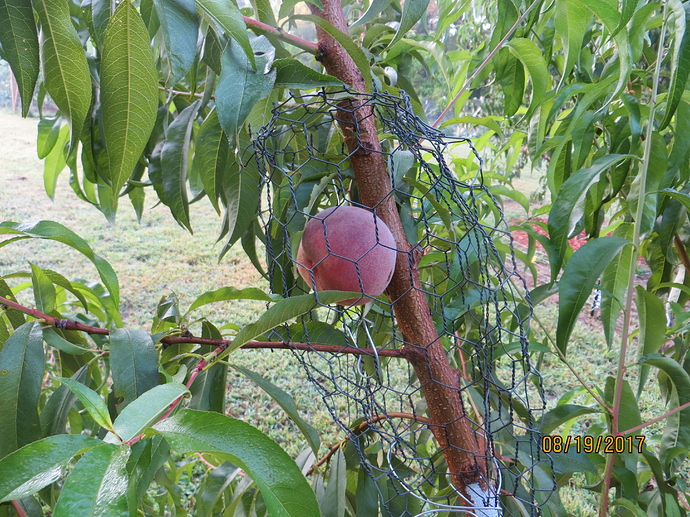 I should think about that for the 2 surviving Reliance peaches. (One of which already has teeth marks in it, that I had to remove a JB from the other day!)

Anyway, time I’d finished picking beans and started on the little cage thing I was doing it via headlamp…