I’m looking for some insight to this problem, see pic below: 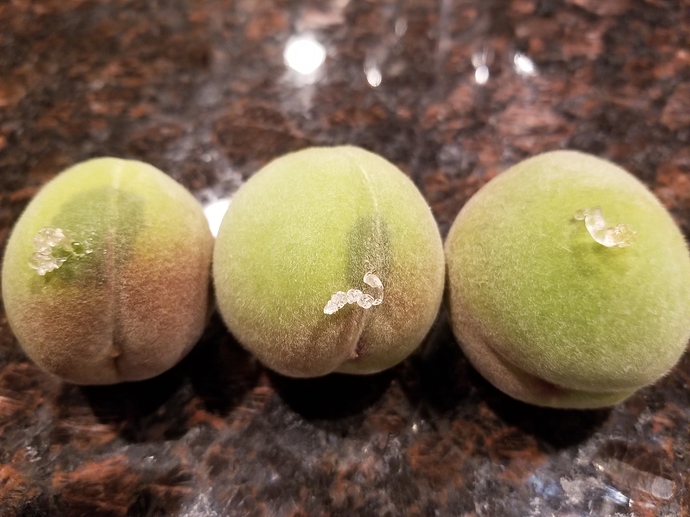 Here’s what else is strange: out of the six peach trees with fruit on them, only one of them is doing this. My previous experience with OFM has been across all of my peaches and apricots.

When I cut them in half, the pits look like they have split, but I can’t tell if they split on their own or if it is a result of me cutting it in half. Although, the kernel does look bad in every one. Still cant find a worm in the kernel.

I’m beginning to think it is just a result of splitting pits. Every single oozing peach has a discolored brown kernel filled with a jelly like substance and a pit that looks fractured. I opened up a non-oozing peach and the kernel is nice and white with a solid white center. Pics below:
Oozing peach #1 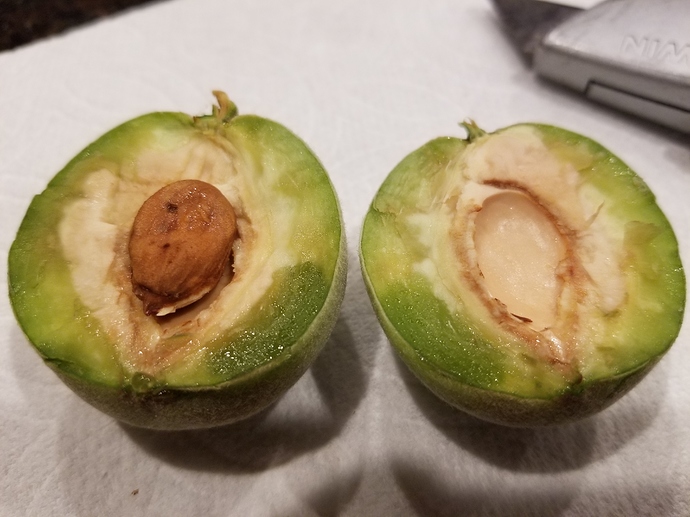 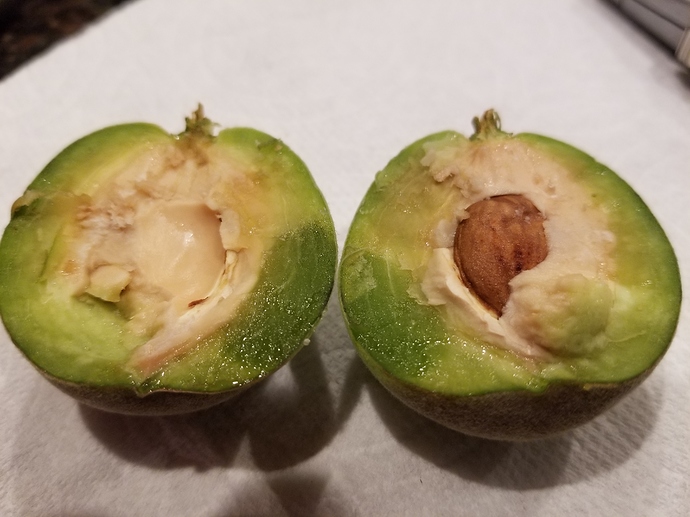 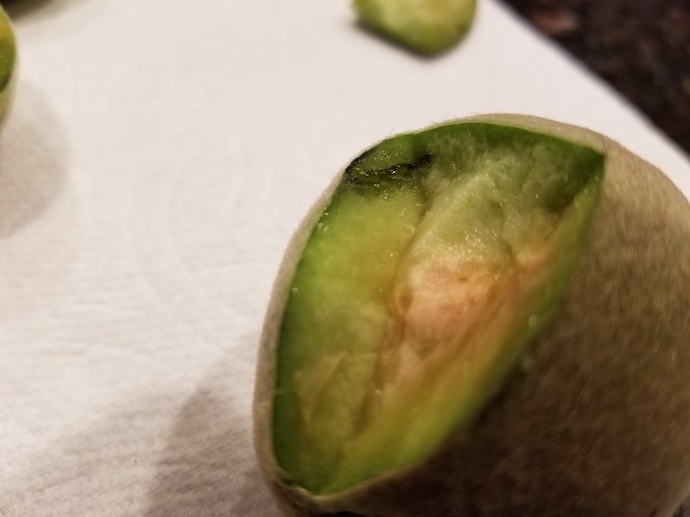 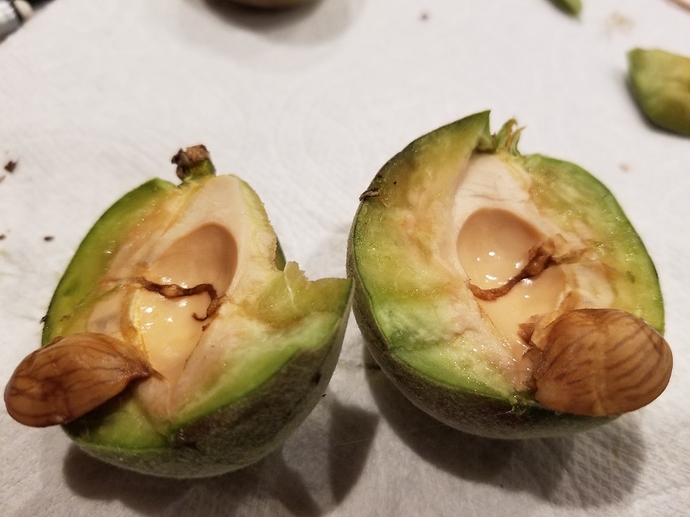 Peach with nothing wrong: 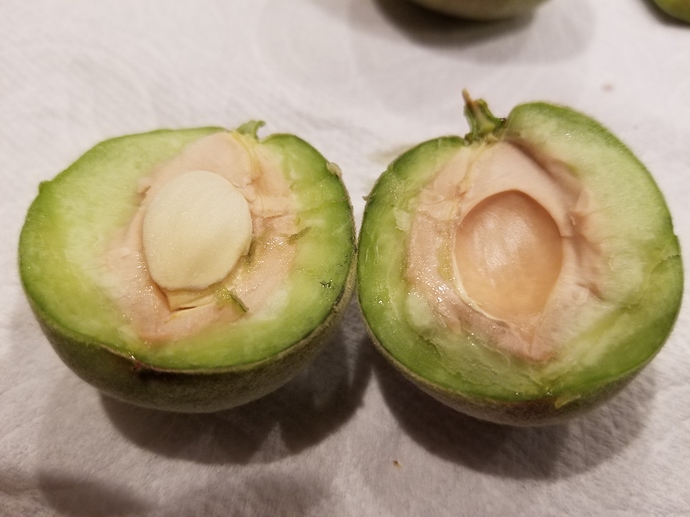 Has anyone seen this before? Am I misdiagnosing the problem?

What’s the streak, tunnel-like across the peach in the 4th pic? Look most like tunneling.

When I had a lot of split pit in my PF-1, they had no ooze like that.

Maybe, someone with a lot of peach experience can chime in. Whenever I see oozing, it is bug damage. Sometimes it’s caught early before eggs hatching so there is no tunneling to show.

@Olpea, can you help, please?

That streak in the fourth picture runs all the way around the pit. It looks to be split in half all the way around with some tissue growth filling in the crack. I thought it looked like tunneling as well, especially with the curly pattern on the left half but, upon closer inspection, now I think just a crack? Pic #3 just above pic #4 is the same peach in an attempt to just cut away a section at the point of the oozing. Looks like the flesh just cracked in a circular fashion (a spall) and the sap pushed through the skin at one point along the edge of the spall. Again, very strange. Maybe I am missing something obvious.

Some varieties are prone to this kind of thing. Indian Free is one peach which did a lot of this on the seams for me. The pits were not split on that peach, it was the exterior seam where the sap was coming from. Foster is another peach that does that a lot. I was pulling those guys off but at some point I figured out they would mature perfectly fine so now I ignore it.

Good to know, Scott. I am also glad that my Foster peaches are inside Clemson bags. Otherwise, I could have picked them off seeing oozing like that. That’d have been a waste.

Glad to see someone else has experienced this as well. This is only happening on my O’Henry.

I just now saw this thread. Been pretty busy lately and haven’t been on the forum much.

The peaches are clearly damaged, which of course produces the sap. It’s interesting to me, both peach trees and their fruit ooze sap if damaged in some way.

The question is, what caused the damage? I can’t say for sure. I can say split pits do not cause that kind of damage.

I get some oozing occasionally from peaches like that, which as you suggest can be OFM. But other insects can sting the peach from feeding and cause damage and peaches to ooze. But, in those cases I don’t see the ring of damaged darker green tissue which the first two of your peaches show (in the first pic).

I wonder if it’s also possible the stings could be OFM, but are so fresh the worms are small enough they are easy to miss?

I’d be interested to see if other peaches showing these symptoms, on your O’henry tree, develop normally (please report back, if you think about it).

I’ve grown O’henry for years and never seen any higher incidence of oozing peaches on that variety vs. any other.

Sorry, I can’t be of more help. I’ll be curious to learn what you figure out in the next few weeks.

Thanks Mark. I can only imagine how busy you must be this time of year. I appreciate the feedback. This particular tree is also suffering from either shothole fungus or bacterial leaf spot. I am spraying now, but I started a little late. Still odd that no other trees have fruit that is doing this.

I have the same thing. I think that it is stink bug damage.

Now that you mention bac spot. That will produce some oozing sap on peaches.

I don’t recall o’henry getting it had enough to ooze, but it does get it pretty bad here. If you’ve had a lot of cool rainy weather, that may well be what it is.

Maybe. The leaves are hard hit. No spots on the fruit though.

I have the same thing. I think that it is stink bug damage.

I will keep an eye out for stink bugs. I only see a couple every year, but they are very sneaky. Thank you!

Seeing this same thing on May Pride here. Cut one up and saw nothing inside (should have taken pictures of the inside but didn’t). Pit is still white, soft, fruit is bigger than a quarter, maybe 1.25-1.5" diameter.

Both fruit I’ve seen it on has the twisted gumming from the blossom end tip. 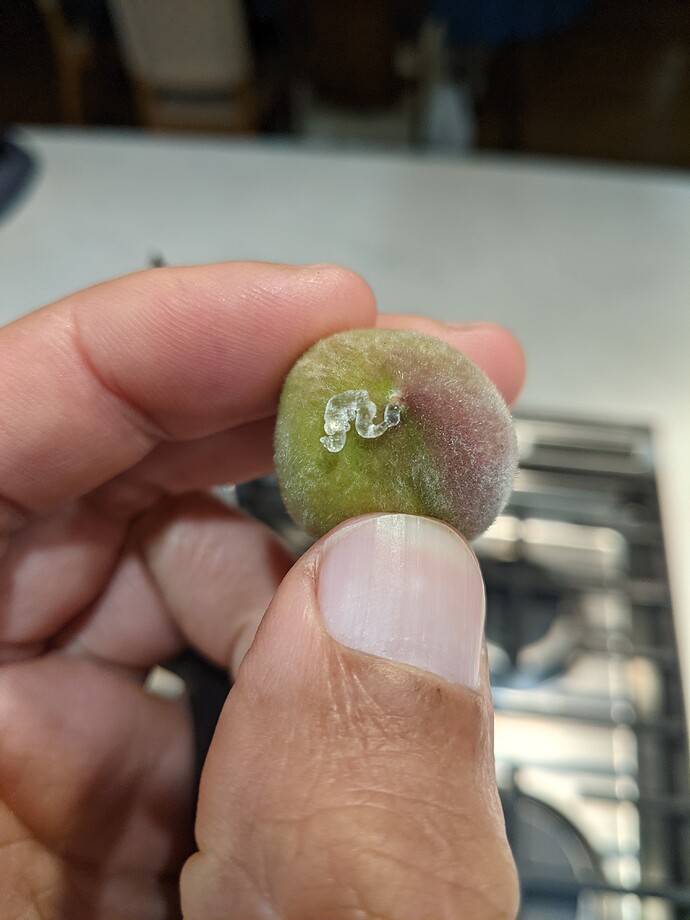 Here in the northeast I would assume that to be stinkbug damage as has already been mentioned. Sometimes the bugs are hard to find, other times they are crawling all over the fruit (green stinkbugs in their larval stage). When it is them they tend to get most or all of the fruit without control at first signs.

BMS ones tend to be stealth attackers, somehow. Here in the northeast their populations seem to have crashed this season- at least locally. Usually such things are regional. They are the ones that tend to do the most internal damage with interior flesh translucent as in the photos you shared.

Same problem here! Both on peaches and on bark. I just reached out to an arborist about it and he is stumped. Hoping for a solution soon. Some internet sites say the peach boerer? But maybe I have multiple problems!!
image|690x920

As you read upthread, oozing can be several things. However, yours looked like bug damage. Can you cut them up to see what you will find inside.

Often I’ve found tunnels and worms inside. A few times, I’ve got lucky and bug damage was only skin deep. I was quite sure my peach was toasted with a crescent scar of plum curculio and other marks were found on it. I let the fruit hung on the tree for 10 more days to see what could develop. Turned out, this one was only skin-deep. 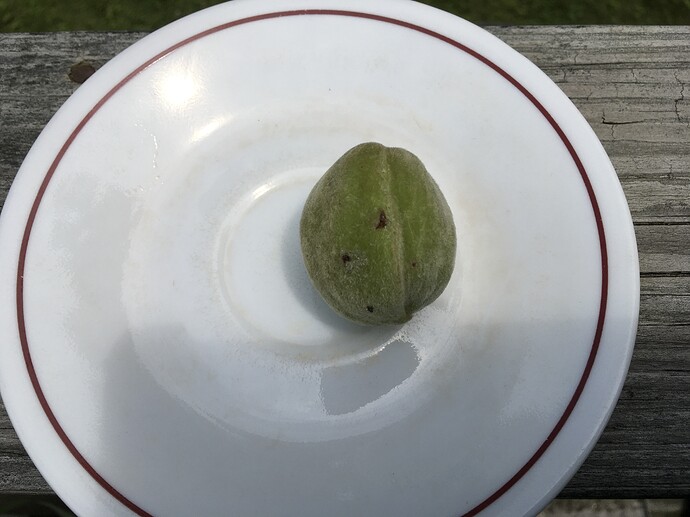 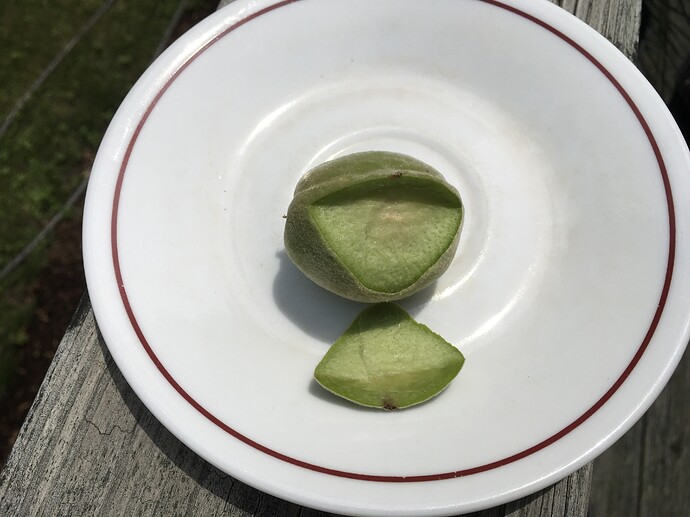 As I mentioned somewhere above, for me that is usually just a flawed fruit which is oozing sap at the flaw (usually along the seam) when it rains a lot. But, the first thing you need to do when you see a peach like that is to cut it up and look inside to see if there are bug tracks; if there are that is your problem for sure.

Stinkbugs usually also leave some sunken tan spots on the skin which deforms the fruit a bit, and I don’t see any of that so I doubt it is stinkbugs.

We got 5 inches over 5 days and the sap was just flowing out of the nects. It dried up, the sap dried up.

That fits with my observations as well. In my case, not rain but after I water seems to be a trigger for sap oozing. Good indicator that I need to back off a little.