Peaches too advanced for this date 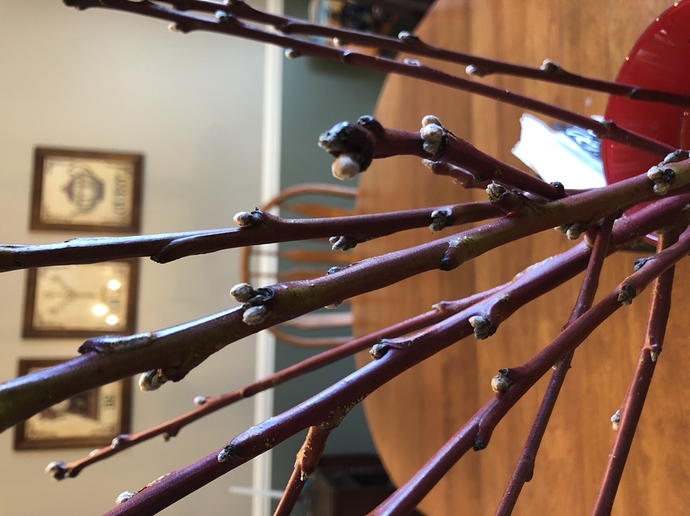 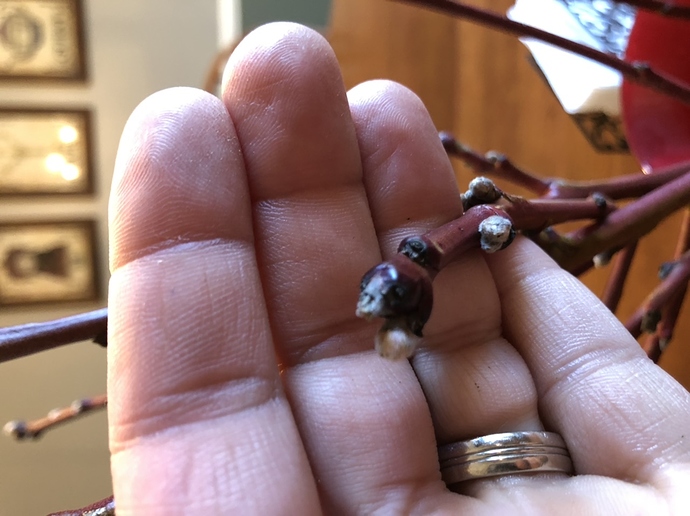 Last hard freeze usually around 4/4. Last “official” around 4/20. It was 12° yesterday morning. I started pruning, so I stuck these in a vase for fun and information.

This could really be any of the first three stages on the bud hardiness chart. Some look like first swelling, some look like calyx red. 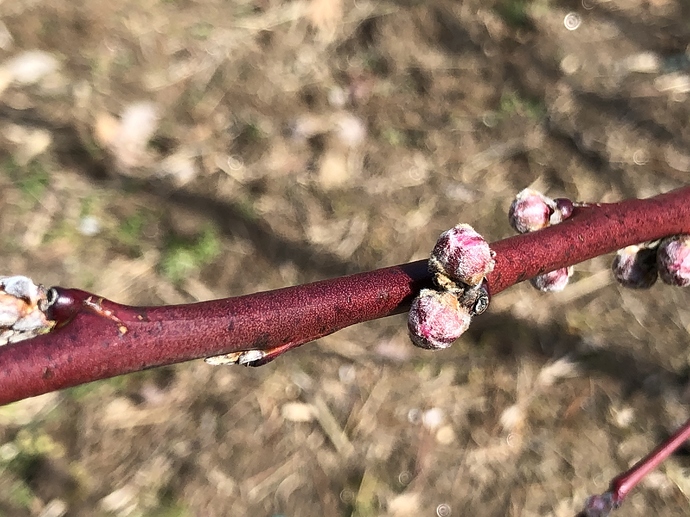 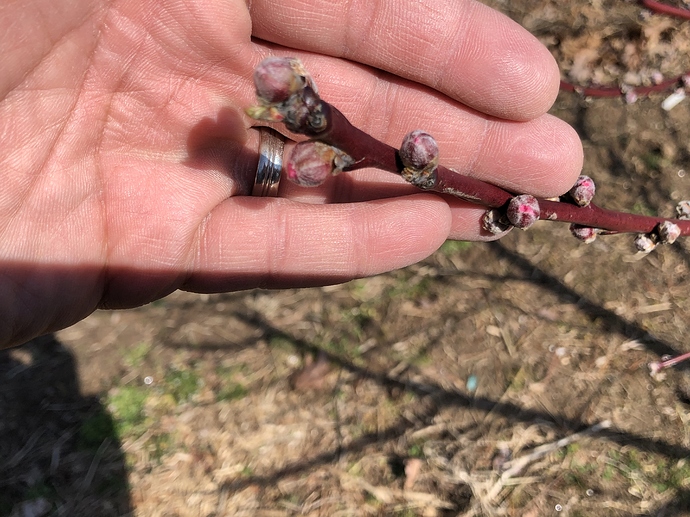 Mine should be in full bloom by the end of the month going by the last 3 years. I sure hope that your weather doesn’t bottom out on you and kill the flowers

I think we’re a bit early as well, but not as far along as yours. My peaches are swollen, but not at the popcorn stage. The pluots are getting closer to blooming though. Looking at the 10 day forecast, I don’t see it going lower than 32, though it probably will at some point in March.

My first apricot bloomed a few days ago (Tomcot). I am not super worried as the weather has been warmer all winter this year, but it is going to be riskier than the last couple of years.

Our 10-day low forecast is 37F, that is 10 degrees warmer than needed to keep blooms OK. Ten days away is March 18 which is often bloom time anyway.

Nice pink blooms on my peaches in Chattanooga

Does Zard apricot bloom as late as people say? I’ve read it blooms with peaches.

Zard starts blooming a wee bit before peaches, but overlaps with peach blooms.

Note that I don’t think it has any real advantage as the blooms seem to be more frost-sensitive. Tomcot always does better than Zard. Or, did better - my Zard died a few years ago and I didn’t replace it.

I have to admit I’ve hardly gotten any apricots off my two Zard trees. I keep giving them more time thinking this will be their year. I just need to cut them down and replace them with something which produces.

White apricots are more like pears in terms of how long they take to productively bear. The only one that never bore for me was Afghanistan, all the others eventually (10+ years in) started bearing reasonably well. If there were no frosts Zard would give me a good crop.

My Zard has been flowering for three years now. Still, the production has been pretty meager. Hardly any more than a taste.

I’ve tried I think 7 different varieties of apricots (supposedly some of the most reliable producers) and they just bloomed too early here. Maybe I’ll give Zard one more season and see what happens.

Do you have other apricot varieties to cross-pollinate your Zard? Most apricots in Central Asian and Iran-Caucasian groups are not self fertile.

My Tomcot and Flavor Delight started blooming today, the former just a handful, the latter is about 50%.

That could be part of the problem. I don’t have any other apricots. Although I wonder if peaches wouldn’t cross pollinate Zard, since the blooms overlap. Peachcot and other interspecific crosses come to mind. That must have been my thinking when I planted Zard.

Although I wonder if peaches wouldn’t cross pollinate Zard, since the blooms overlap.

I would not count on that.

Peachcot and other interspecific crosses come to mind.

Apricots can be picky about pollination. As an example, the Armenian apricot variety Shalah is very highly valued in Ukraine and many people there try to grow it but have very poor productivity since they don’t grow other Armenian varieties that pollinate Shalah. In Armenia, Shalah is always interplanted with Sateni and productivity is great.

For me the main problem with white apricots is not having enough blooms. It took many years before there were enough. My Shalah finally blooms (and sets) well 15 years after planting it. The Hunza apricots are similar in taking many years to get a good bloom.

Zard is much later, and if it is not self-fertile it may have problems getting enough pollen some years even if there are other apricots present, as the bloom may not overlap. I obviously had something pollinating it, if it was not too cold I got a good crop. 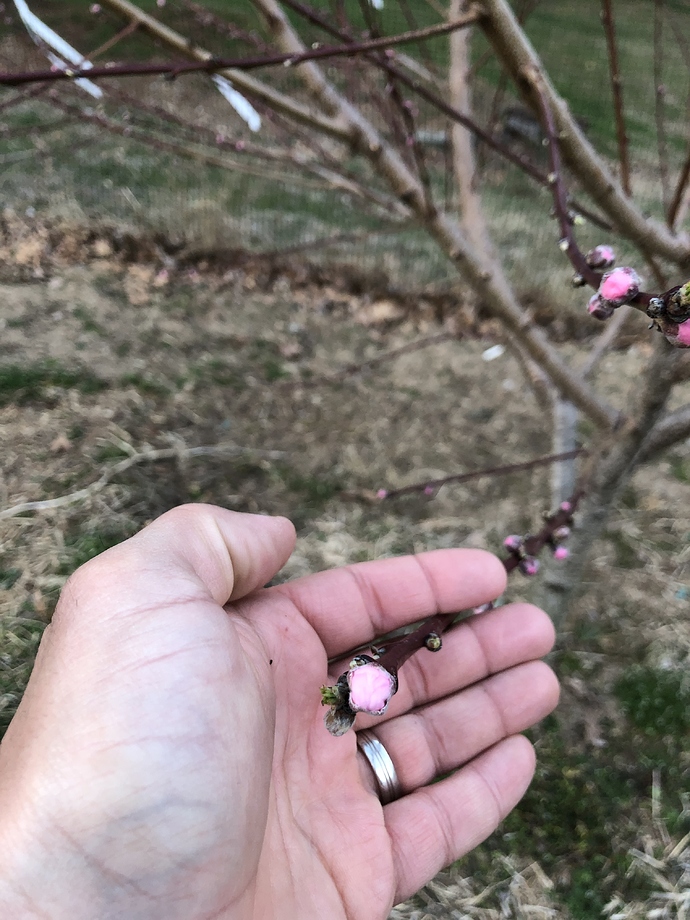 I grafted Zard next to Tomcot and Orangered. Zard bloomed about a week behind the other two but some blooms overlapped.

I got a couple of Zard to set fruit on a foot long scionwood. I have orher apricots on that tree but Tomcot and Orangered are the closet to Zard.

@Olpea - my hunch is that TC and OR could cross pollinate Zard. TC is very productive for me regarding fruit setting. OR is not far behind on productivity, either.