I’ve tried searching the forum and the web in general but it seems large charts for pear pollinators and blooming times lack.

I ordered honeysweet pear this year, and was originally only going to have one pear tree. Well, you guys know how it goes…I need at least one more, balance I tell myself. So I need something that falls in the same bloom time, preferably blight resistant and anything else resistant would be great.

A local greenhouse has some Harrow Sweets for sale, but I have no clue if they would match. I’ve heard moonglow is a good choice for honeysweet and could order that, but really would like to know my options.

You might find something in the Reference section under Bloom and Ripening Charts.

Honeysweet is self pollinating so you get a crop no matter what. Moonglow is good as a pollinator as you can get for this one which will get you larger pears for this variety. Its a good choice in pears. Jules Janick from Perdue released this peaf in 1977. The fruit are very small 2 1/4" - 2 3/4" in size. This variety is small because of its parents which are a cross of Seckel x U.S. 220 done earlier in 1955. This pear was chosen as the best of the 137 seedlings from the trial. Its small and petite and like seckel to well mannerred for Kansas but still i do grow it. Ive not successfully fruited it but when i do tje pears get ripe in September.

Since Starks released it for sale who would know it better? Here is their description
" Description - A tasty pear – just right for eating fresh or canning. This variety is smooth, creamy and as sweet as honey. Tree is moderately disease-resistant to fireblight. Introduced by Stark Bro’s in 1979. Harvest in early September. Self-pollinating, but will yield larger crops when pollinated with Starking® Delicious™ or Moonglow. See more Recommended Pollinators below" ( bartlett & seckel were listed but i question seckel since its a parent - clarkinks." 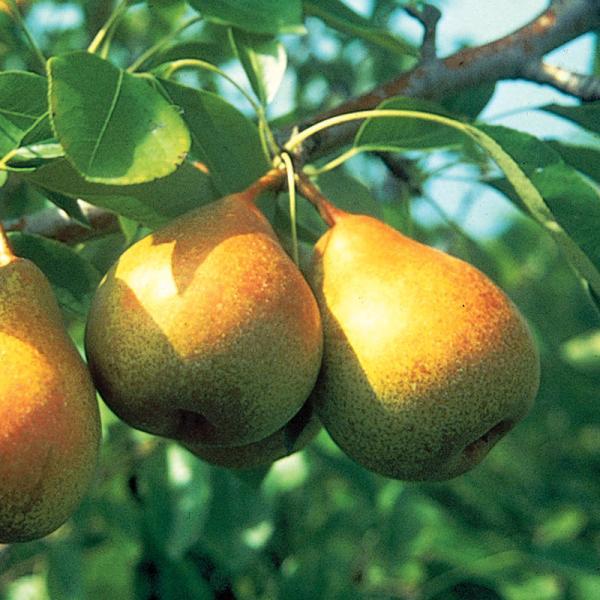 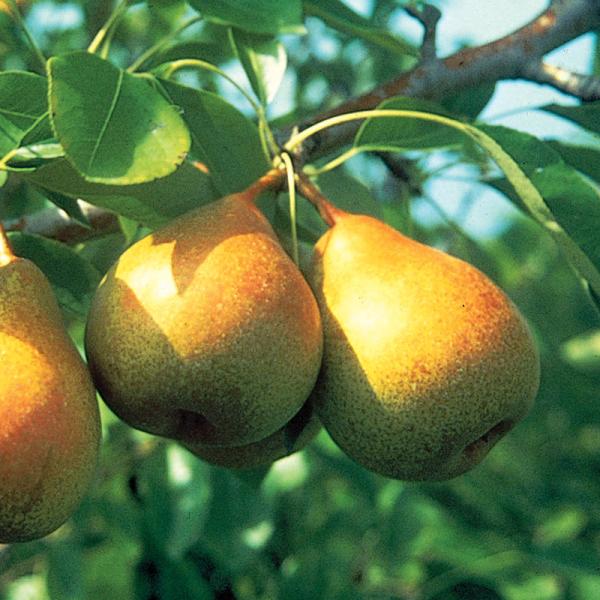 Marknmt, thanks for the link. According to that chart, Moonglow(which works well with Honeysweet) is good for Harrow Sweet, would it be incorrect to assume Harrow Sweet would pollinate Honeysweet? Honeysweet is not on that list.

Clarkinks, thanks for the info, some of which I’ve come across already. The reason I went with Honeysweet was the self pollinating but realized I probably would want larger pears and more pears in general, hence trying to find a suitable partner that is also fb resistant. Also, I’m hoping Honeysweet is a reasonable pollinator for others trees. I see that it’s a diploid which, if I remember, is a good cross-pollinator.

Honeysweet will produce very few pears but they are 7 on a scale of 10 for quality so thats not unusual. Warren is high quality and shy on fruiting. Magness warrens sibling seems better but is more disease suscetible. There is no free lunch so to speak when it comes to pears.
Correct triploids are typically sterile but diploids are typically good pollinators. If i was in your position i would plant my harrow sweet and next year graft moonglow in te center of it or harrow sweet. You need 1 branch on the top as moonglow but not a whole tree. Noone knows the parents of harrow sweet but i strongly suspect seckel is one of them.

would it be incorrect to assume Harrow Sweet would pollinate Honeysweet? Honeysweet is not on that list.

I cannot be sure because honeysweet has yet to bloom for me. The storms were severe here last year which may play a factor due to branch breaks and this year the freezes during bloom are severe. Harrow sweet is a very late bloomer overlapping my small yellow pear in my experience. Like Paragon which was developed by Oregon State University made from a cross of Comice x red Bartlett there is only mere scraps of information available. We know these are high quality pears but the research simply has not been done yet. We know starks has done more than anyone with honeysweet so i would stick with what they said. @alan was the first one i knew growing harrow sweet and recommended it to me originally about 7-10 years ago. Perhaps he has observed honeysweet being grown in the same orchard as it but i doubt it strongly since both varieties are rare. Unless Alan grew them himself. @scottfsmith may grow it by chance. Wish @TheFluffyBunny was around lately he might know.

Thanks for all the info, Clark.

As far as the center graft, I guess I would remove the leader and allow the graft to take over a the main? I don’t have any experience in grafting(and don’t expect a full lesson here) but it’s something that I’ve thought about looking into.

I think I’ll just roll with the Honeysweet and Harrow Sweet and see what happens. Worse case, I have to bring in a Moonglow one way or another.

As far as the ‘no free lunch’ comment, it seems not much is. I try to keep this in my mind when planning things but the perfectionist in me always looks for ease and efficiency.

Thank you again for all your comments.

Hi, new here, but I might be able to help. I’ve grown Honeysweet since 2015. It’s my earliest blooming European pear. This year it was in full bloom on March 27, but we had an unusually warm winter this year. I’m in Maryland, zone 7b. I have Asian pears blooming at the same time, never had any pollination problems. I absolutely love Honeysweet. It is an excellent tasting pear, had a full crop last year. No fireblight problems so far.

I am also in zone 6. I have 6-7 E pear varieties that have flowered. All their blooms are overlapping.

My Honey Sweet does not have flowers yet.

Thanks for the info, DMend and mamuang. It seems your experiences are on opposite ends as far as bloom times go. I have read Harrow Sweet is a late bloomer, and am in zone 6(b for me) so similar to mamuang.

I’m going to go with Harrow Sweet and risk it. I’ll definitely report back whenever I get more info and/or personal experience to hopefully help anyone else out.

@Susu and @PharmerDrewee, both are in PA and grow pears. They may be able to give you more accurate info.

I absolutely love Honeysweet. It is an excellent tasting pear, had a full crop last year.

Hi Dee,
When does your Honeysweet ripen where you’re at?

I don’t grow Honey Sweet but I absolutely love Harrow Sweet. I got fruit year after grafting. I keep grafting it to everything. It has a long bloom period. Mine are still in bloom right outside Philly area.
Sounds like everybody is waiting for their Honey Sweet to bloom. I think you should get harrow sweet, if not for anything just to get fruit sooner. Then you can graft few varieties on two trees and you’ll never have to worry about pollination.

By the way, I also have a Moonglow tree. But I can’t say anything good or bad about it since I’m still waiting on fruit.

I’m in PA but don’t grow Honey Sweet yet. I think I’m grafting it this year though so hopefully I can provide feedback in the future.

@Susu So the rumors of how fast it produces are true. Glad you like Harrow Sweet. I went to AC Nursery and grabbed one this year to plant.

EDIT Here is a pollination chart I found.
https://www.acnursery.com/resources/pollination-charts/pear-chart
It does not list Honey Sweet or Moonglow, but Harrow Sweet is listed as a potential pollinator for practically everything.

Hi @Palmer, I picked Honey sweet on the last week of August last year. First week of September the year before. I saw one pear on the ground and did a tilt test. 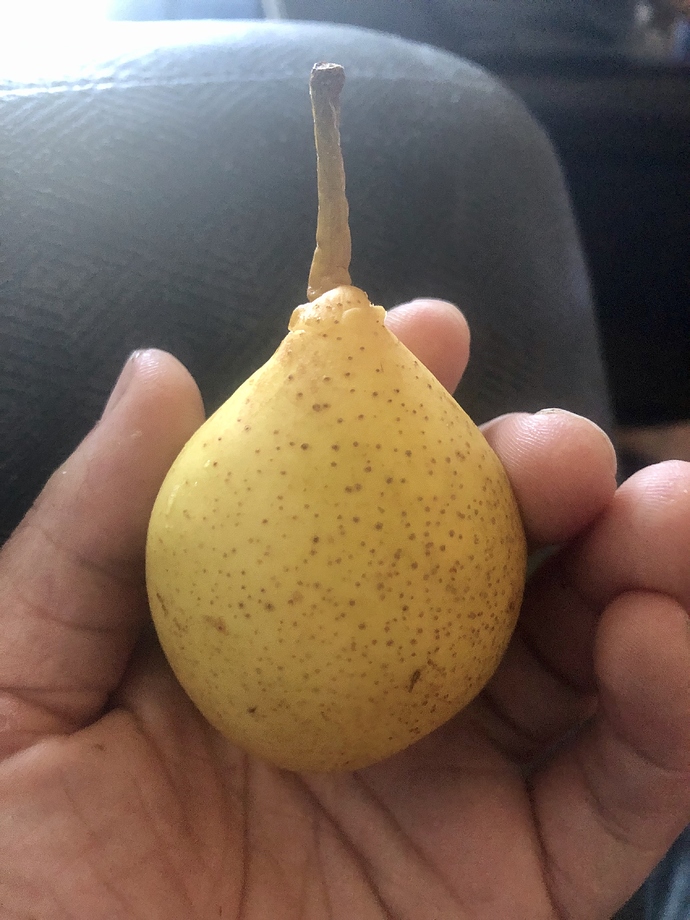 xcellent tasting pear, had a

So Honey sweet is best picked when ripe and they don’t need refrigeration? Do the pears come off easily when they should be picked? Do they have to be eaten right away?

This year the tree has one pear on it, the first non aborted pear we have had on the tree, and I don’t want to pick it at the wrong time, it being the only one.