To answer your pollen question you can plant any number of Hark or Kanza so long as there is at least (1) Hark per (8) Kanza or more than 1-Hark. You could do 16 Kanza but you will need (2) Hark trees. Or you could do any combinations of either so long as the 1:8 quotient is filled.

What I said is if you want to easily keep your crops separate, then you don’t alternate trees for example but rather you plant a row of the same variety/cultivar.

Pollination is best achieved when the single tree that is going to pollinate the other eight is placed where the pollen will best be blown from natural wind which is the first tree at the northwest end of a row. Of course you’re doing 4-acres so there will be correct patterns or placement but you need to tell us how many Kanza you will plant and how many Hark you will plant.

Thank you so much. You’re a very good person.

I’m waiting for Mr. Darrel’s suggestions for Oswego and the other varieties.

Since Eyber asked few questions I’ll join ( though I planned to ask in a year maybe,when I came to that). I looked at his temperature tables, and find that there i can see temperature table for my village also

I was really surprised. I thought that mybe there is for my place, but for village never

. As some of you know I’m planning to plant pecans, again I thank Dax for his help, and I opened a new topic about it. Not to stall more, here is the table for the village.It should be in zone 6b. And I’m not planning a plantation, I’m doing it out of enthusiasm. Common walnuts are doing quite well. and since I’m in the basin, it happens that we have late spring frosts
Suggestions for species? I do not know exactly ph level, I’ll ask my father because we were doing a test two years ago. We wanted to plant plums there.

Hello, lilke. Yeah Dax is a super good person.
I’m going to build a new garden and found the climate first. Now I’m looking for pecan varieties. My garden is 8b. Dax Kanza and Hark suggested to my garden … I will consider if there are other suggestions. Waiting for suggestions from other expert friends.

Take it easy, you have plenty of time for planting. You need to do the preparation of the soil before. Where will you get the seedlings, whether they will be grafted or you are going to graft seedlings in field?..
For now, I have small seedlings, I will have more of them in a year, and then I will graft them. That’s the only way I can afford it.

I get less rain than needed if you are just in a average location, but i planted my young trees in a moist creekbottom with groundwater only a few feet deep 3 to 4 ft and they are doing well their first year without irrigation. I hope it will be ok for the taproot to go down into the water as the trees mature. Time will tell. But for now as young trees they like the moisture.

Oswego and Lucas should be considered because they increase the genetic diversity while offering good production with relatively low maintenance.

Other than that, your overall plan is sound. Like Dax, I’d like to know if you have a source of trees or if you will have to plant seed nuts.

You want 24 trees per acre when thinning is completed for the lifetime remainder of your orchard. Initial spacing is 35-40 feet between trees and row spacing I believe is 50 feet. Darrel do you know? Maybe it’s 60 feet / 20 meters.

As years fly past you progressively remove trees which begins about 17-years after initial planting & elimination will depend upon how fast individual trees have grown.

I’ll need research about how your grid will look for pollination purposes. Is the land open without trees at the borders?

Monte Nesbitt published some info showing that optimum spacing is about 12 X 12 or 14 X 10 (in meters) between trees and rows. This is for a commercial planting with eventual thinning required. There is a formula to calculate optimum square inches of trunk area per acre. The best spacing can be argued several ways depending on whether the grower is planting a few trees in the yard vs a commercial grower wanting to maximize production potential.

Planting on 14 X 10 with thinning to bring it to 14 X 20 and eventually to 28 X 20 works best if commercial harvest equipment is to be used.

For the home grower, and this based on personal experience, planting trees 15 meters apart is probably a good balance between getting production and not having to do excessive tree maintenance. I have trees in my yard on this spacing that are starting to crowd after 17 years. Within the next 3 years, I will have to remove at least 3 trees to keep them producing.

Hello, lilke. Seedlings will be grafted ready. I don’t know graft. I will buy from a manufacturer here. But what Dax and Darrel say (Kanza, Hark, Oswego, Lucas) might not be the sort. I will search. I’il plant the seedlings later. I’m gonna make the land by then.

Hi paulinkansas6b. Thank you very much for your advice. I’il pay attention to the water level.

Dear Dax, I’m going to listen to your suggestions about tree gaps.
I bought my garden. There are little wild oak trees in it. I’il clean them up. There are pine trees around my garden.

Dear Darrel, I’m going to pay attention to their suggestions about tree breaks. But it is very sad to take the tree later.

Pecan garden is only two or three varieties are standing. According to the climate and soil characteristics of my garden gives you what kind of best results in your opinion. Type 1 and Type 2 are: Kanza, Hark, Oswego, Lucas types. Dax Kanza and hark suggested.

I drew a simple diagram. Which type 1 and type 2 should be 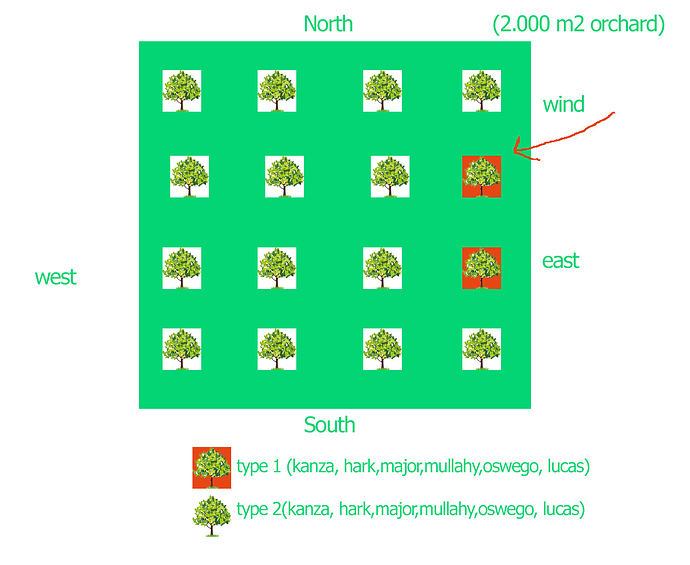 @lilke
Martin, I looked last night at your climate per your link you provided. You’re going to need very early maturing pecans. Unlike @eyber you don’t have the heat he does during summer. It’s not even close. But not to worry because I think we can have you mature some pretty decent pecans: Mullahy and NC-4. Water is your main concern since heat cannot be resolved so try your best to plant in low areas/near streams and creeks and the like.

@eyber I missed earlier where you would plant the pollinators and since you’re not dealing with absolute tons and tons of acres your proposition of planting at the north-east and south west will definitely pollinate the rest of your trees.

A friend in Germany follows this thread on occasion but is not a member. He just enjoys reading… he sent links which I’ll post:

And Google translate (it’s a bit of a rough translation for us English speaking people.)
https://translate.google.de/translate?hl=de&sl=tr&tl=en&u=http%3A%2F%2Fwww.pikan-cevizi.com%2Fpikan-cevizi-hasat-zamani%2F

Thank you, Dax. I will read these articles.
I didn’t understand Type 1 and Type 2. Because my English isn’t very good.
Red tree Hark. green tree kanza pecan. Would it be nice?

eyber, if you have Excel, this chart would be very useful.

Hark is a high nut quality pecan that originated from a seed nut planted in Illinois zone 5b by Bill Totten from seed obtained at an orchard in Moberly MO. The ortet was killed by lightning in 2017. Hark is protandrous and a good pollinator for Kanza. One parent is likely Major as indicated by the thick husk with clamshell sutures. Scab resistance is good in northern areas where Hark originated but unproven for southern regions with high scab pressure. Hark runs 60 per pound with 56% kernel. Tree growth is upright with weak branch angles indicating need for pruning for stronger scaffold limbs. Source: Dax Herbst and Bill Reid

Kanza originated from a controlled cross (‘Major’ X ‘Shoshoni’) made in Brownwood, TX by L. D. Romberg. Cross made in 1955. Tested as 55-11-11 by T. E. Thompson, L. J. Grauke, Wm. Reid, M. W. Smith and S. R. Winter and released in 1996. Nut: ovate, with an acute apex and obtuse to rounded base; round in cross section; 77 nuts/lb, 54% kernel; kernels golden in color, with dorsal grooves that do not trap packing material. Released for its ability to produce good yields of high quality nuts in northern pecan producing regions (Zone 6b). Protogynous, with late pollen shed and early pistillate receptivity. Kanza has excellent scab resistance. Kanza is currently one of the most grafted pecans in the U.S. Source: L.J. Grauke

Lucas is a seedling from Lucas Ohio in 1965. Lucas is protogynous, precocious, and scab resistant with 108 nuts per pound and 49% kernel. Nuts mature 10 days before Colby. Lucas produces decent quality nuts on a compact willowy tree. Lucas has a flaw that nuts will not fall from the tree at maturity. Very tolerant of cold weather, but susceptible to yellow aphids. Source: G. Wesley Rice

Hark: Type I pollen shed/pistil receptivity (protandrous) where pollen shed is first then pistils become receptive to pollen from another tree

That’s quite an unbalance. I’d personally rather have Kanza as my type two but a few Oswego in place of a few Kanza is a fine idea. I’d elimate Lucas based on it’s a type II @Fusion_power a penny for your thoughts again?

@eyber I don’t think you understand how good of a nut Hark is. Kanza is fantastic but Hark will get the blue ribbon most days over Kanza. It’s incredible & it’s also a few weeks less to maturation than Kanza or 10-days and that means a lot, but, it’s not my investment. 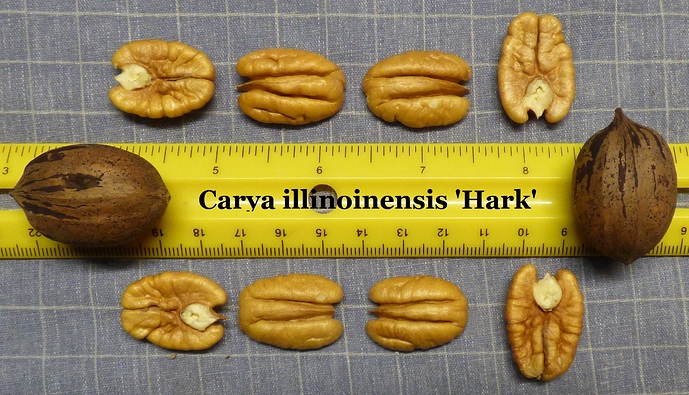 Dax and Darrel thank you very much. Very enlightening.
In the scheme is the red tree Kanza, the green tree can be Hark.

I asked a silly question:zipper_mouth_face: