I got verification of the dichogamy pattern of Adams #5 over the last few weeks. The bloom pattern was very similar to last year’s check as shown in the pollination spreadsheet. Pollen shed is protandrous with total overlap of pistillate flower bloom. This pattern only occurs with varieties that are homozygous (pp) for the genes for protandry. Of interest, pollen shed is relatively late making it a very good candidate to pollinate Forkert. Now THAT would be an interesting cross. A very high quality very large pecan crossed to a very scab resistant small pecan.

I live West of Souix Falls and a tad South… 4B. I have a Northern Hardy; am TRYING to get a 2 nd one to grow for pollination. Will try to upload a 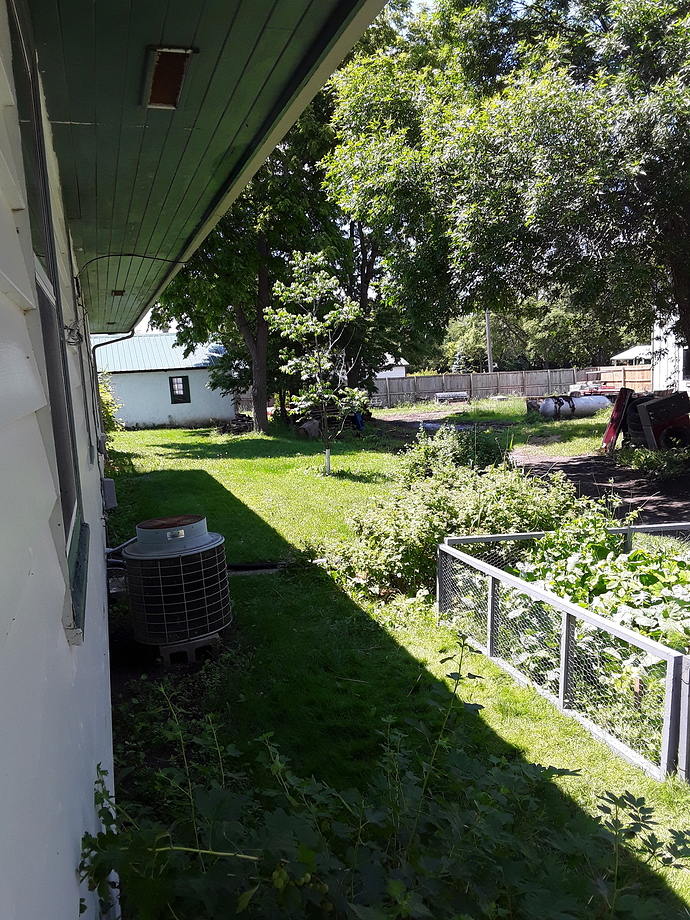 Its promising to see your pecan doing well, i just planted some and im south east of sioux falls a little over an hour. I never hear of anyone else around here growing pecan trees. How long has yours been in the ground? Looks like its 15 feet tall in the picture.

Homeowner just south of Omaha Nebraska here, very interested in this dicussion. I’m trying to fill out or barren hillside acreage with fruit and nut trees, and was hoping to be able to do some pecans. I planted two Kanzas last year from Rock Bridge, since Kanza seemed to be widely considered the best northern type II at that time I was researching. I was considering ordering a Hark and a Shepherd at the time but Rock Bridge was out and I don’t think anyone else was selling them at that time. I’ve just recently found this thread though, and I see that Kanza and Hark are a strongly recommended combo. But I had some questions regarding a few others I’d considered.

I’ve seen almost no mention of Shepherd here, and I was wondering why that is. Is it mainly the overlapping pollen shed possibly self-fertilizing and making inferior nuts? I of course get a lot of my info from Bill Reid’s blog, and Shepherd also seemed a good possibility, not quite as good as Hark in terms of nut size, but earlier maturing by two weeks, and I thought it might be good to have the Shepherd as a backup early bearer. In case Hark is too late. It seems like average frost free days here is around 160, but we do have a fair amount of summer heat. I was going to try to use a tool I think Dax referenced earlier in the topic to post some of that data including days above 28F, but couldn’t find the link.

Beyond Shepherd, I was considering a long-shot at Lipan, just because the nuts are apparently so large, yet the USDA gives the maturation as about the same time as Oswego (which has been recommended in this topic). But this is one that Bill does not mention on his blog, and the pollen sheds are not in that giant spreadsheet. I was curious if you guys had any insight into that one? I know it’s probably too big a nut for me, but still curious why Oswego is recommended but not Lipan? Just not enough data?

Similarly, Waccamaw caught my eye, but there is very little data. Bill Reid on his big cultivars page says it shows no sign of scab, but in one 2015 blog entry he says it’s susceptible. I didn’t know if he just doesn’t update the cultivar page that much or what. It’s also in the ‘not recommended’ section of the big pollination spreadsheet, I’m guessing for scab. But just wanted to verify that, since I don’t really have any other sources on it.

I’ve only got room for 2 or 3 more trees, and I’ve never done grafting, so I’m kind of limited on what I can do. This topic is incredible though, for all the info and help you guys provide! Thanks so much!

You’re on the same line with me in IL.

Shepherd has been producing tiny nuts up here but it doesn’t south and I mean only 2 hours drive south. My friend and I have nearly decided to never graft it again and I certainly do not plan to at my home.

All you need is Hark and Kanza. If you want to add another type 2 (which I think is a good idea) choose Mullahy. Hark and Mullahy will mature yearly for you while Kanza may not. However, my expert friend Gary Fernald and another expert Fred Blankenship have lived long enough to confirm that cultivars adapt to colder climates.

At my location we’re seeing Kanza fill 100% but the nuts are smaller than down south but are excellent still.

Waccamaw and Lipan are unadapted to your climate. Look into Lucas and Warren 346.

I was looking around for things to read about pecan and found this. #8 is Patrick Conner’s and has one very interesting tidbit. He states that Avalon is from a cross of Gloria Grande X Caddo instead of Gloria Grande X Barton as per previous published info.

I received an email from Patrick Conner this morning confirming that DNA tests show Avalon is from a cross of Gloria Grande X Caddo. He said that they made crosses on the same tree using Barton pollen on one side and Caddo on the other. The nut that produced Avalon got mixed in with the Barton group.

This makes Avalon more interesting given the production pattern of Caddo.

Hold the presses! Recent DNA tests show that Caddo is from Brooks X Schley, not Brooks X Alley. This means that Avalon derives 25% of its genetics from Schley.

I have an unusual observation about the Kanza seedlings I grew out last year. The way I started seed nuts was in trays of 4 inch deep cups. As the nuts germinated, I moved them into 8 X 18 tree pots. The first seed to germinate are on one end of the stand in the greenhouse and the trees that germinated a month later are on the other end. The surprising thing is that the last to germinate are far more likely to be scab resistant. Of the earliest trees to germinate, about 5% are scab and gnomonia resistant. The last seed to germinate are about 40% resistant and have some of the fastest growing trees. One seedling in particular is a foot taller than the rest with beautiful and disease free foliage.

I have no idea if this is useful, but it is interesting to speculate that I could deliberately select Kanza nuts that are slow to germinate to get a high percentage of scab resistant seedlings.

I’ve been watching diligently for shuck split on the Adams #5 tree. I found the first harvestable nut Sept 28th 2018. This is an off year with only a few dozen pecans on the tree. 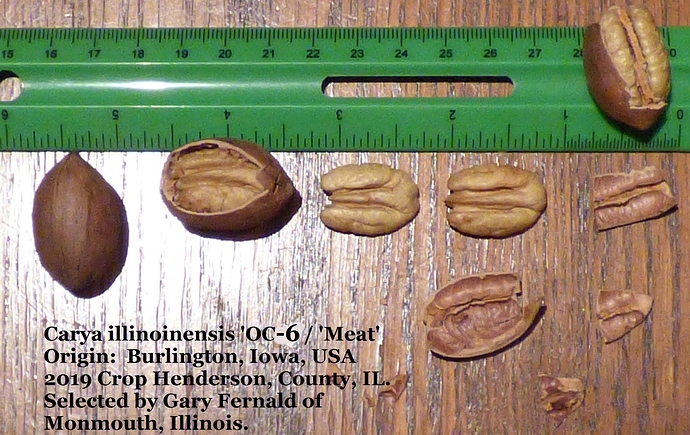 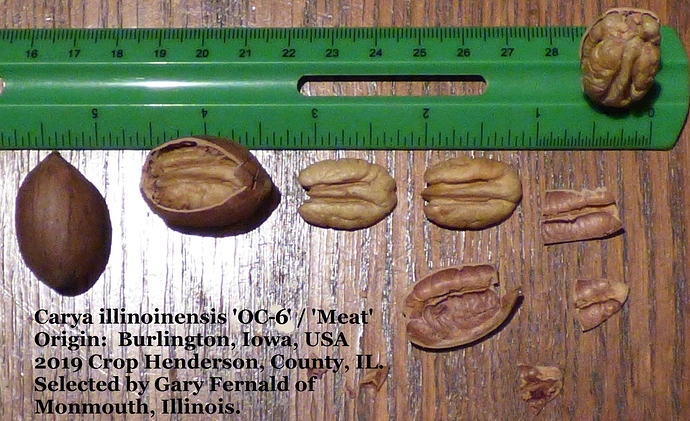 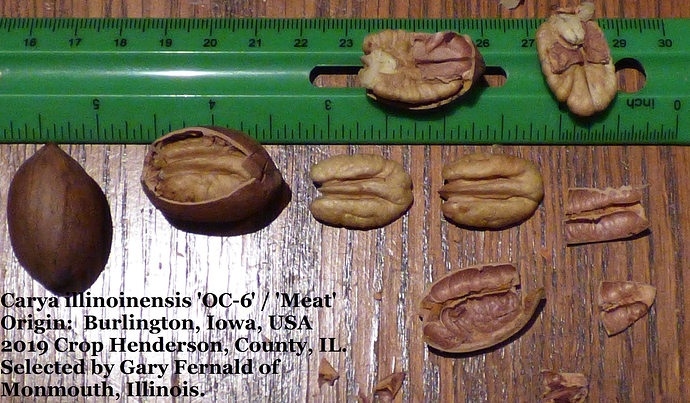 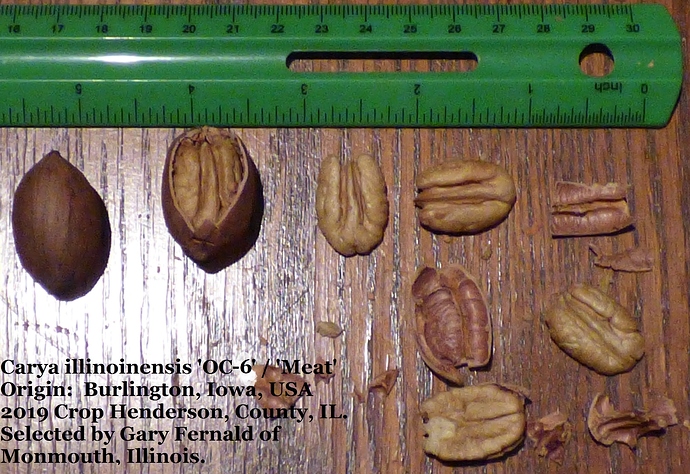 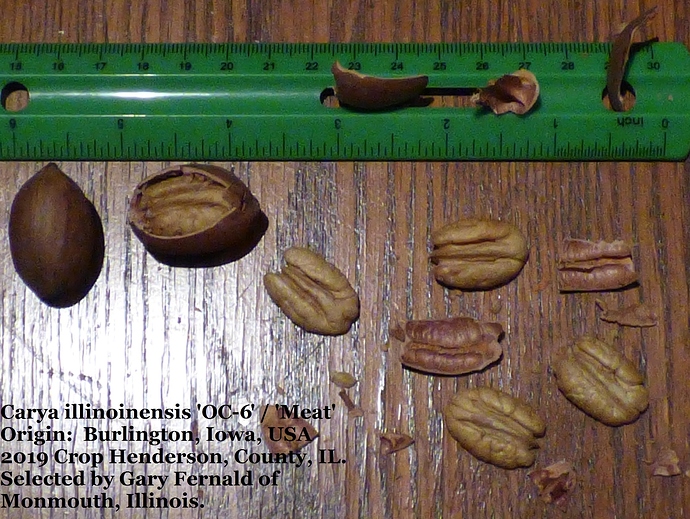 ‘OC-6’ is an early-ripening / far-northern cultivar ripening at approximately 145-days in the native range of Carya illinoinensis at O’Connell Island near Burlington, Iowa. The photos shown were from a grafted tree of OC-6 on the Illinois side of the Mississippi River at Burlington, IA.

This is the seedling growing in Florence, Al that was mentioned earlier. It is 52 to 58 nuts per pound with 54% kernel. The tree shows exceptionally good scab resistance. It shows some stink bug damage but very few other pests appear to affect the tree. I want a few grafts! 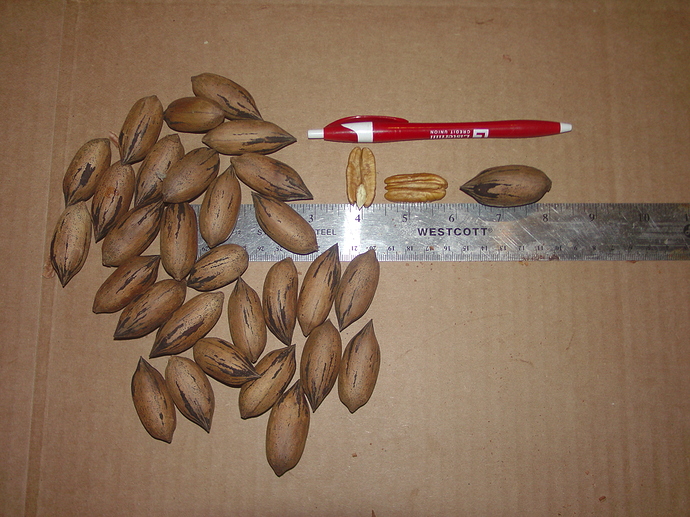 I am looking for some Hark scion to graft onto an unknown variety of pecan. If anyone has a couple to spare I would appreciate them. I will pay for postage.

I can cover you on the Hark scions. I’m looking for Snaps.

Let me know when you want them shipped.

I am looking for Snaps Pecan scions. I would like to have two or three. I have over twenty different northern Pecan cultivars including Deerstand, Carlson, Campbell, Osage, Warren, Mullahay, Lucas,
Green Island Beaver to trade. Happy to pick up shipping.
Thank you,
Darshan

Dax
(photos have been corrected as has information)

I drove to Auburn today to collect scionwood. There are several more varieties that I will collect from trees I have growing. IOW, this is not the final list of scionwood I expect to store for spring.

From trees here in my yard
Adams #5
Amling
Zinner

Tossing this back to the top. It is pecan harvest time here. I have about 100 pecans off of a Lakota tree. The tree is a 5 year old graft on top of a 15 year old rootstock. It is about 5 inches diameter above the graft which is pretty good given the age of the graft. Lakota very obviously overbears with many clusters of 6 nuts. On a large rootstock with relatively small graft, nut size is fairly good. As the graft gets larger, it will be difficult to keep Lakota producing acceptable pecans.

I also have a few mature pecans from an Adams #5 that is loaded with pecans. Adams #5 tends to produce a fairly heavy crop with clusters of 3 or 4 nuts. This is far less draining on the tree which suggests it will alternate bear to some extent but not as bad as Lakota. It is currently producing a heavy crop after a light crop last year.

Spring freezes nuked the crops here. Have seen a half dozen, and maybe two dozen nuts, respectively, in the Posey and Kanza trees here next to the house… nothing on any of the trees in the nutgrove, or the 7-acre, 100-ft wide CRP riparian bufferstrip along the creek.
Have gathered a couple gallons of shagbark nuts from my two best locals… usually get 60+ lbs per tree, but the crop’s going to be significantly less this year. Very few nuts or acorns throughout the woods

Interesting difference vs here Lucky. We have a very heavy acorn and hickory nut crop. I picked up some C. Laciniosa nuts growing beside the Tennessee river a few days ago. Flavor is surprisingly good. They are typical hard to crack nuts though not nearly as thick shelled as some shellbarks I’ve sampled.

This is an unusual trait that to my knowledge is documented in very few other varieties though I have seen an occasional tri-lobe pecan in several other varieties.

We get those here on our trees, not in high numbers …but some.

This is a young ‘Hark’ 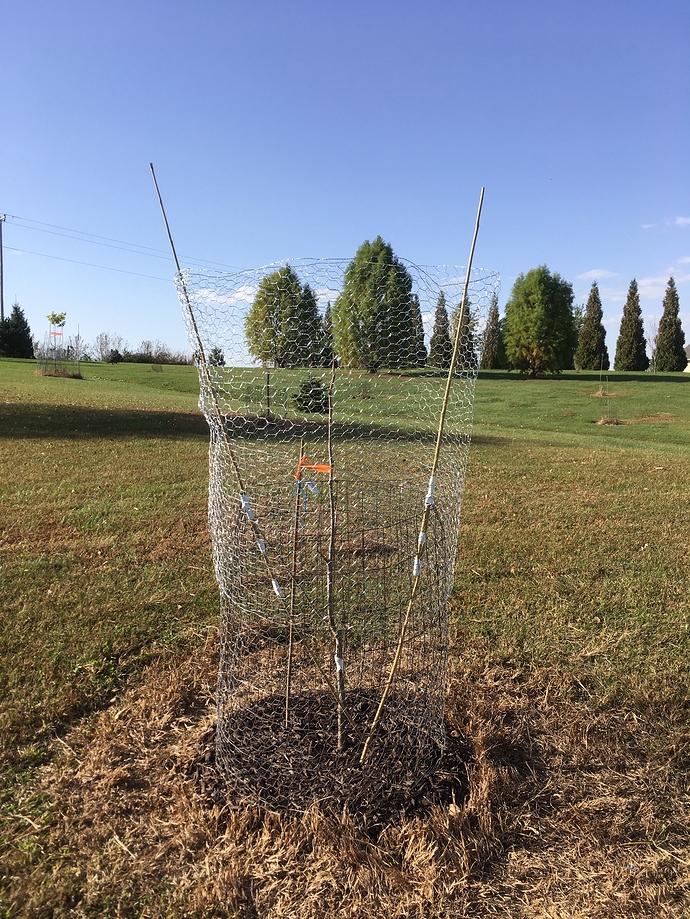 A 3-year Hark that’s been cut and cut and cut for scionwood. I’ll let it branch next year above deer height (above the fence) 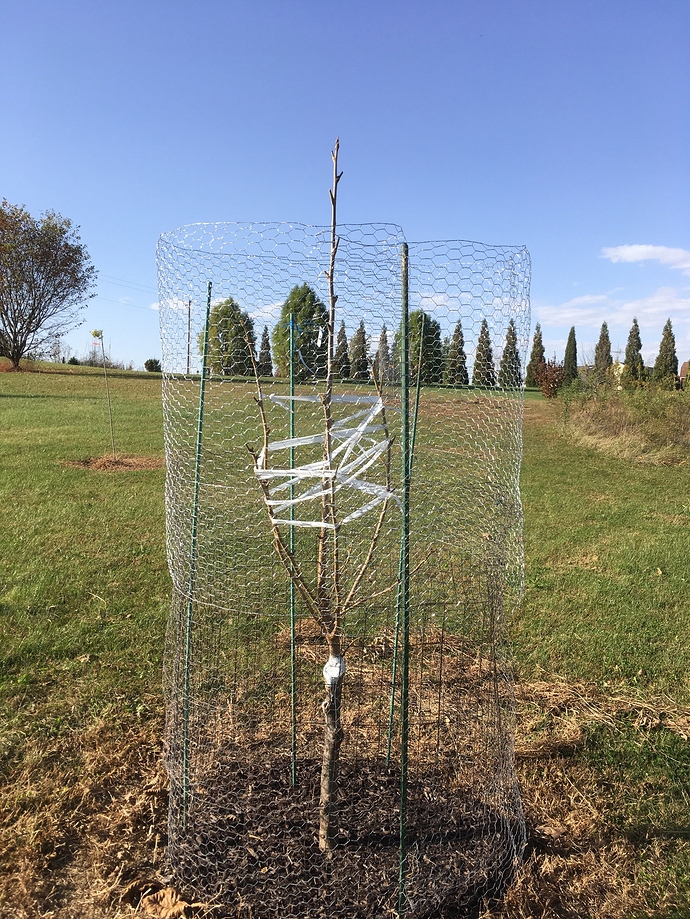 My ‘Mullahy’ that’ll too be cut for scions this winter and let to be grown above deer browse: 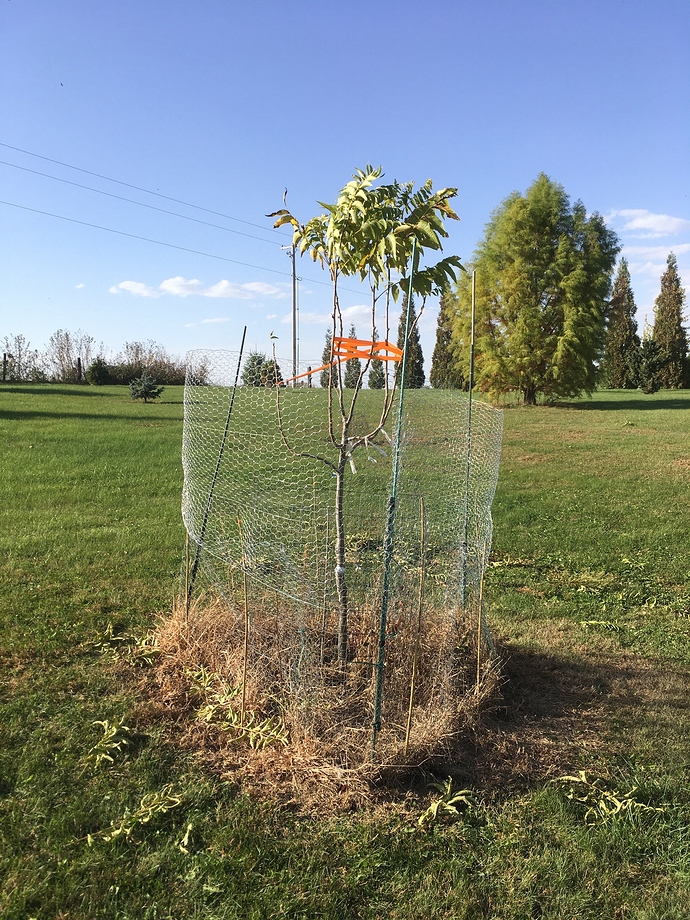 My Kanza that’s a couple years old that got really nipped this Spring and didn’t do much after that. You can see all three pecans up above in this photo: 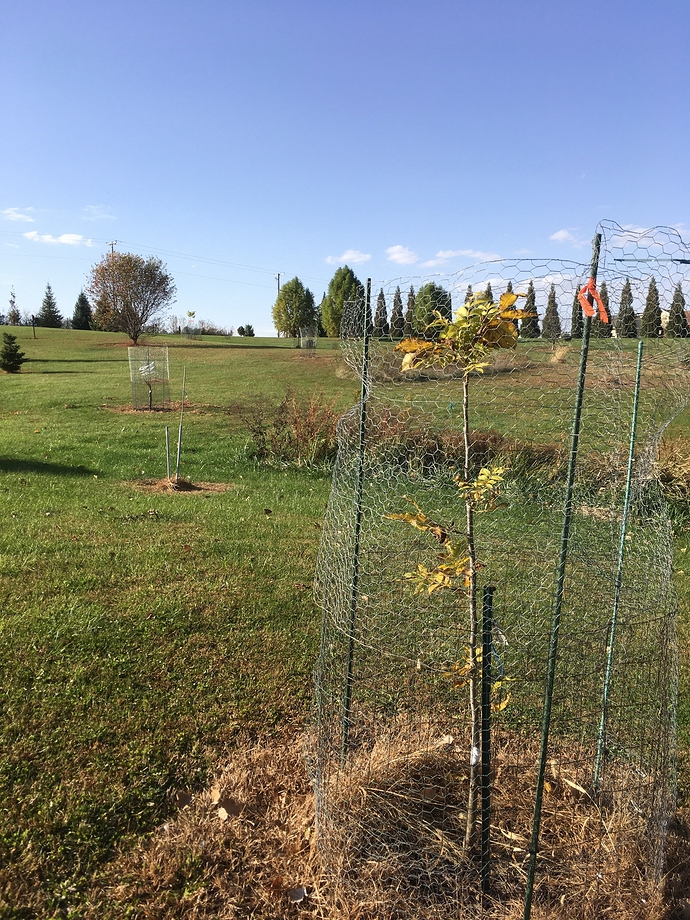