Thought I’d post a couple shots of my prune plum grafted to Nanking cherry- here it is at about 10 years old with its first decent fruit load. You’ll see the deer have been helping with pruning, but not a great deal.

The logic in the graft was two-fold: we wanted a prune that didn’t sucker and which didn’t get too big. So far so good- but it took forever to mature! It’s brother on its own roots took just as long, however

There’s more on the subject here: The ongoing saga of the prune on nanking cherry 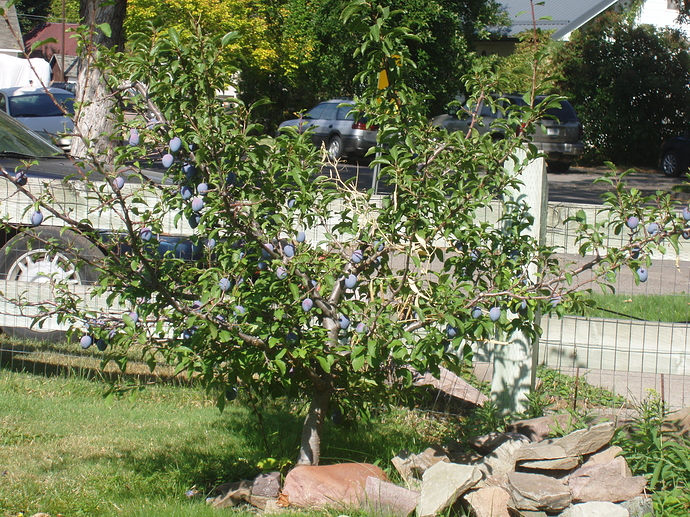 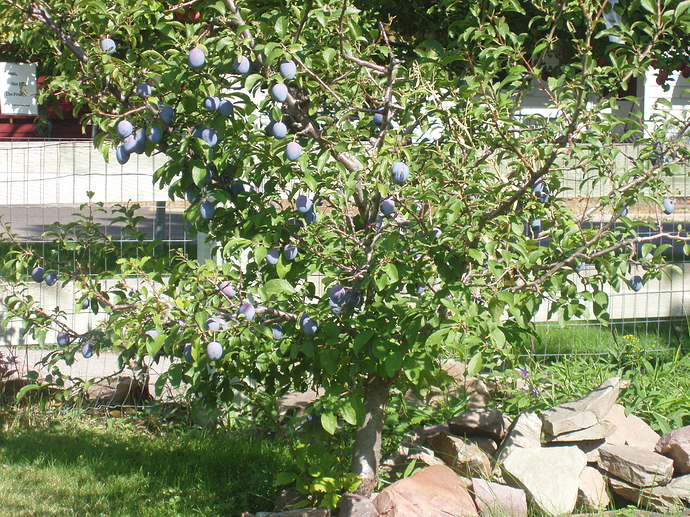 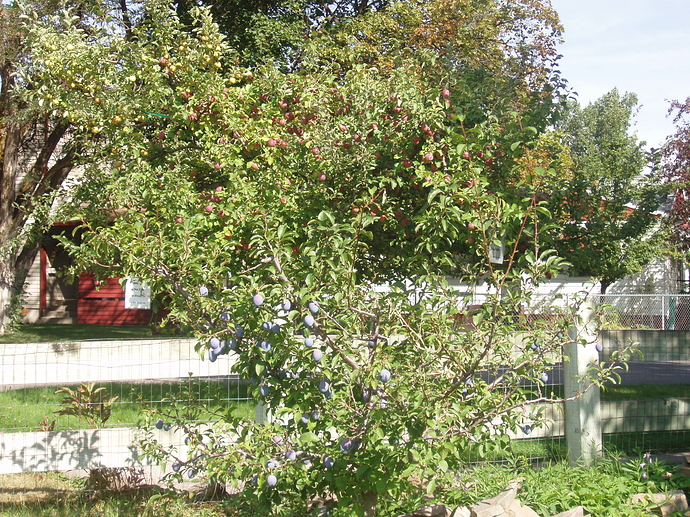 Those look great. I have a couple of Nankings Ill probably take out if they dont produce next year. Maybe ill graft them over instead. Wonder what else can graft to Nanking. You think the Saskatchewan bush cherries could graft to Nanking?

Congratulations! Hope they taste as good as they look.

I’ve never had a Nanking cherry, but to see prune plums hanging from the tree reminds me of Easter eggs! Beautiful fruit Mark.

You think the Saskatchewan bush cherries could graft to Nanking?

Be surprised if they didn’t, frankly. Try it and let us know?

Here’s a link to an earlier discussion:

Our friend Lucky once told me plums and peaches are accepted - I just want to double check that I would also be fine grafting: pluots (makes sense they would and long term) but pluerries I’m curiously unsure of. What else grafts long term within species (common names or botanical) and which specific hybrids are accepted? I did some digging on here and saw precisely what Lucky has already told me. ‘Carmine Jewel’ cherry came up in that someone wants to have a go at it on tomentosa. Thanks for …

And within that discussion is this link:

I’ve grafted both peaches and Japanese hybrid plums onto Nanking understock.
My understanding from the late Lon Rombough was that Nanking is actually more closely related to plums than to cherries.
I only did a handful of grafts, on a portion of a bundle of 10 row-run Nanking seedlings. Peach on Nanking was incredibly dwarfed. Japanese hybrid plums were not significantly dwarfed. That’s the extent of my recollection.
I would not hesitate to try putting virtually any fruiting Prunus on Nanking… what have you got to lose?

Thanks for the update, good things have come to he who waited! Enjoy the harvest.

So it has worked as an experiment thus far, but for it to be a good experiment it needs to be replicated. Go for it, folks. I just hope it doesn’t take 10 years for everybody, and I hope the little tree lives long enough to justify that time. There are prunes around here that have been bearing generously for as long as I can remember, and some pretty old Nanking cherries, so maybe it’ll work.

I have a greengage plum and a waneta plum grafted to my nankings and this is thier second summer. So far so good, funny that although both of these on the roots from the nursery winterkilled, these seem to be doing very well. We will see what a few more winters brings.

I work with 3 other marks in a company of like 100 people, so i always introduce them to new customers as “bad mark” to separate us

Mark, (or anyone else) How large is your non grafted Nanking? Is the grafted one quite a bit smaller? I’m planning to plant some Nankings this year here and there and wondering how much space they take if you don’t prune them. Thanks, Sue

Hi Sue. My Nanking (10 years old now, I think, and bearing well) is roughly shoulder height, and perhaps 6-8 feet in diameter. I did some minimal pruning last year, but that thing is about as big as it’s going to get, I think.

Let me make sure we’re talking about the same thing. My “Nanking” is a plum tree on a Nanking cherry rootstock. (The only Nanking I have that is just a Nanking cherry is a knee-high seedling.) I also have a plum from the same root as the scion I grafted onto the Nanking rootstock that is about 9 feet high and leggy as can be.

Here’s a link to photo of if: http://www.growingfruit.org/t/prune-grafted-to-nanking-cherry-bearing/12538

I have a greengage plum and a waneta plum grafted to my nankings and this is thier second summer. So far so good,

Any updates on how those plums are doing on the nankings?

Actually the mice ate the greengage last winter but the waneta is growing very well. It blossomed profusely this last spring and I had about 6 plums. Unfortunately the cold summer and fall did not allow them to ripen.