This is the base of an cherry tree on colt rootstock. It is currently in a container until the forces of nature move me to place it in it’s forever home. Notice the nearly spherical knotty protuberance at the base of the rootstock. What is it? Thanks in advance for your thoughts! 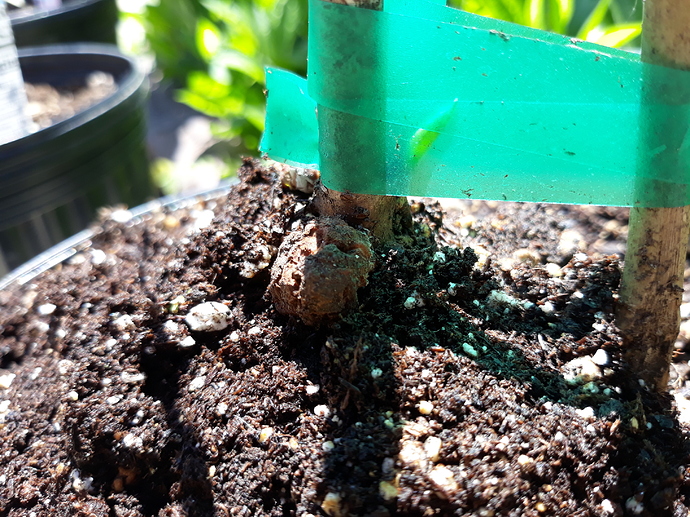 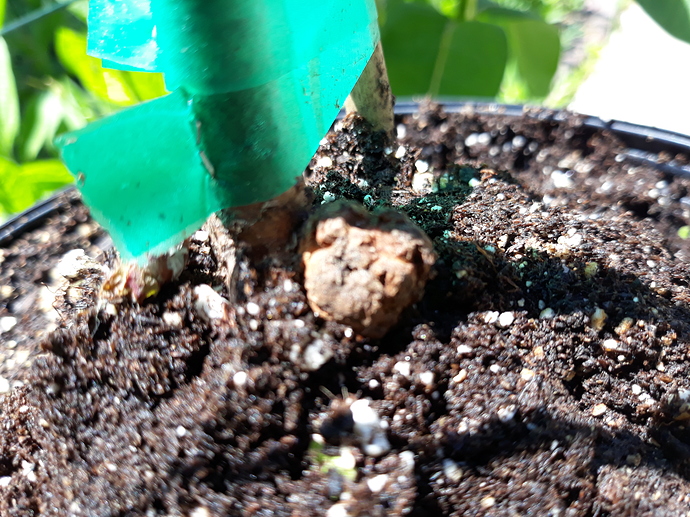 I’m ashamed to admit how many of my fruit trees I have scraped with my tractor mower and done damage much worse than that, yet they all live. I think it will be fine.

I have an issue with several of my peach trees and fruit that I’ve never had before and I’m curious to know if any of you peach growers have seen this and/or know the cause. @Olpea , etc

Basically, I’m getting a lot of peaches that prematurely turn yellow and then drop. It is similar to what happens when OFM or PC get in a fruit. However, when I cut the fallen peaches open, I find something odd. The actual seed inside the pit is withered up, dried, and much smaller than it should be. There are no insect tunnels, and the seeds aren’t being eaten by the usual suspects (OFM/PC). The skin and most of the “meat” inside these peaches looks normal, as does the pit. But once you open the pit on these yellow and dropped peaches, you can see the tiny, dried up, wrinkled seed. The has been happening since the fruits were about marble sized and has continued through now, when fruits are a little smaller than golf balls.

I haven’t seen this in the past, and there isn’t much different this year except we had 2 late frost that killed some peaches and left others, so they could have been damaged. I also sprayed copper late this year (1/2 strength) and it harmed a lot of leaves and could have affected fruit? Or it could be something else entirely. Any thoughts?

My money is on frost damage. With frost damage, peaches can appear to set, then stop growing and fall off, as you describe.

Just want to thank @thecityman for asking a question that described the situation thoroughly. Also, thank you Mark @Olpeafor helping us (me) learning something new every day.

I’ve suspected that currently, my Juliet that have sized up, then stopped, turned yellow and dropped could be because of late frost more than the tree’s immaturity. With immaurity tiny fruit turned red at the end parts and dropped earlier than now.

We have 31F twice during bloom and past bloom. Not serious frost but the timing could be just bad.

With frost damage, peaches can appear to set, then stop growing and fall off, as you describe. 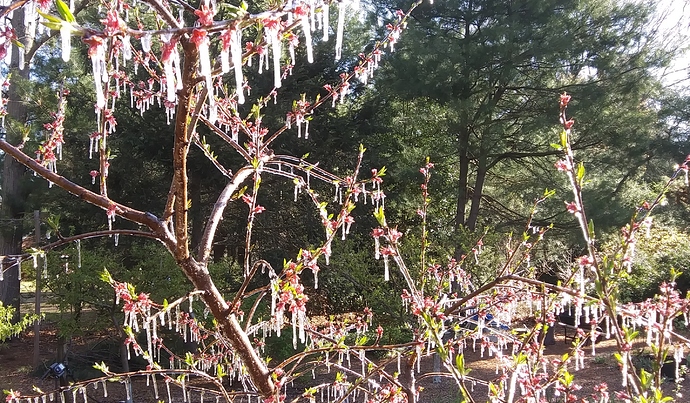 I’ve also had situations as your picture shows and generally pleasantly surprised in the end.

As you know, peach blooms can take some pretty cold temps and still have a full crop. Our problem here was that we were past petal fall where fruitlets were already starting to swell toward shuck split. At that stage they are more sensitive to freezing temps (even though the charts don’t necessarily reflect that).

My guess is that once the fruitlets start to swell, they contain a higher percentage of water, and so are more susceptible to freezing at temperatures below about 30F.

Yes, a few days can make a difference.
4 days made a difference with my plums. Warm weather caused them to bloom early but when they bloomed temperatures were upper 40s to lower 50s and few pollenators. Santa Rosa and Methly flowered heavily but started 4 days apart. Santa Rosa flowered first and only has 2 plums but hundreds on the Methly. When the Methly flowered the temperatures rose about 5 degrees and bees pollinated. Just a fews days of poor weather made a difference.

Can you summer t-bud pears? Or chip bud?

If the bark is slipping, you can T-Bud. When it’s not, chip bud.

ok, can you use no longer dormant cuttings (buds swollen, but still turgid and intact) for Chip/T-budding? I’m asking specifically about plums.

Since I’m new to gardening and ordering plants, I have to ask. Is it a normal practice for a nursery or cultivator to place several cut stems into one “cell” of a tray, have it form a root plug, grow it out in a small pot, then sell that as “one plant” ? I just repotted this blackberry plant I received into this two gallon container. the pic of the base shows the original plug that was grown out in a 3 or 4” square container. The roots seem well established, but isn’t this starting someone out with 5-6 plants that were too densely planted, and just hoping that at least one of the root systems survives long enough to make additional canes or suckers? Granted, in the end, brambles are all about the root stock anyway. I’m just going to hope that it will sprout some healthy canes before the summer ends. 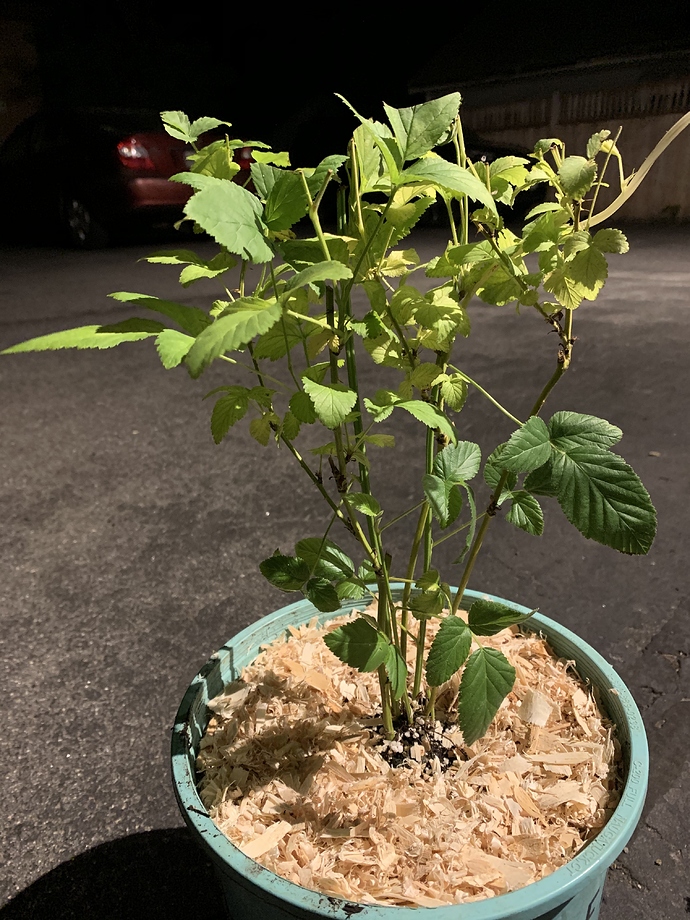 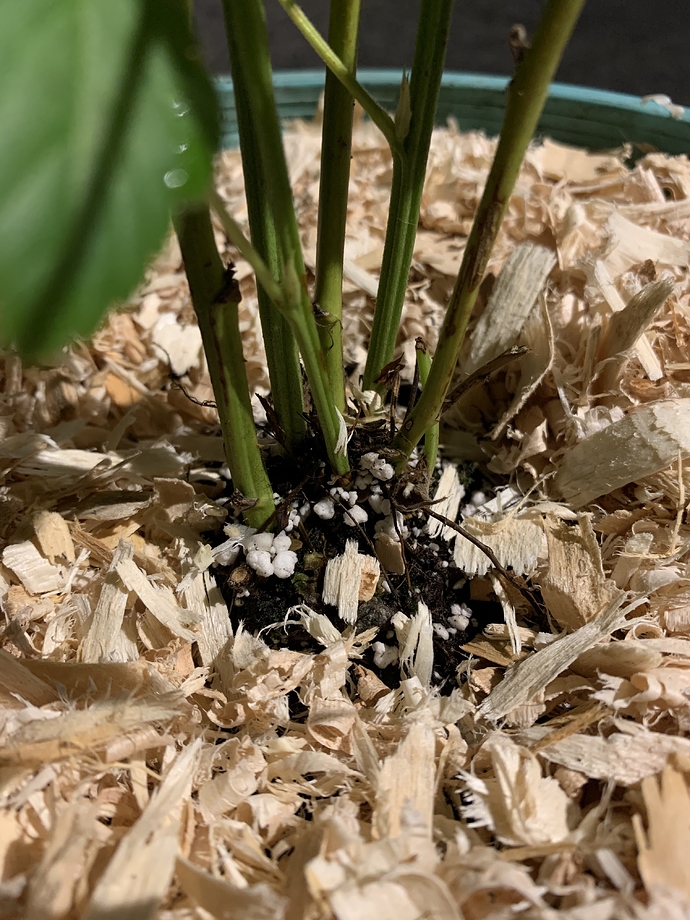 That is only one plant. All the canes are from one crown. Looks fairly normal to me. The blackberries I got this year were a lot smaller than that one. That is a very nice plant! That pot is way to small for blackberries. I would have put it in a 10 to 20 gallon pot. Just to avoid stressing the plant again. You have to be careful not to over water when you put it in an oversize pot.I do so because new canes will be small and weak out of that pot. These plants are beasts that grow 5 foot canes. In a month you will have to water twice a day, they suck water like crazy.
I have 2 blackberries in pots. I hate growing them in pots but I have to protect mine in winter. They are out of their zone. I have to water them daily now. One is in a 10 gallon, another in a 15 or 20.
For your plant I would say the smallest pot you could use is 5 gallon. Which it will way outgrow by this time next year.

Yea I was concerned that using too big of a pot would be an issue. I have a 21” pot I was going to put it in, but it is so small I was afraid of it staying too wet too long. I figured I’d grow this out like this for a while, just like they do at the garden centers or nursery with bare root canes in 1-2 gallon pots. The idea is to get them into raised beds that I still need to build.

Yes that would be fine to keep in a holding pattern…It will not take off till it has room to take off. You’re delaying growth at this point. I guess I would too till the bed is ready. I’m in 5b/6a and grow some western trailing types. Most will not grow outside here, only hardy to zone 7 and just barely. Others do OK, not great. The berries I feel are superior so I take the time required to grow them.I grow regular types too, but just replaced those with cultivars I prefer. So production will be low for a bit.
I think that plant is rather big for a new plant. I would be pleased to have that size. That will easily fruit next year, but not in that pot, and you risk not having fruit keeping it there for much longer. Planting out in summer is something I avoid, it is so stressful on the plants, The heat is not good. it can be dry too. I was done planting out a month ago. Now my new blackberries are growing well and can take the heat.
The pain about pots for me is all the stakes I need for trailing types, and I can’t let it get too big. So production is far from ideal. Still the berries are so good. I’m experimenting with Newberry and have 2 plants in ground now. Besides the mother plant in a root pouch. 20 gallon. 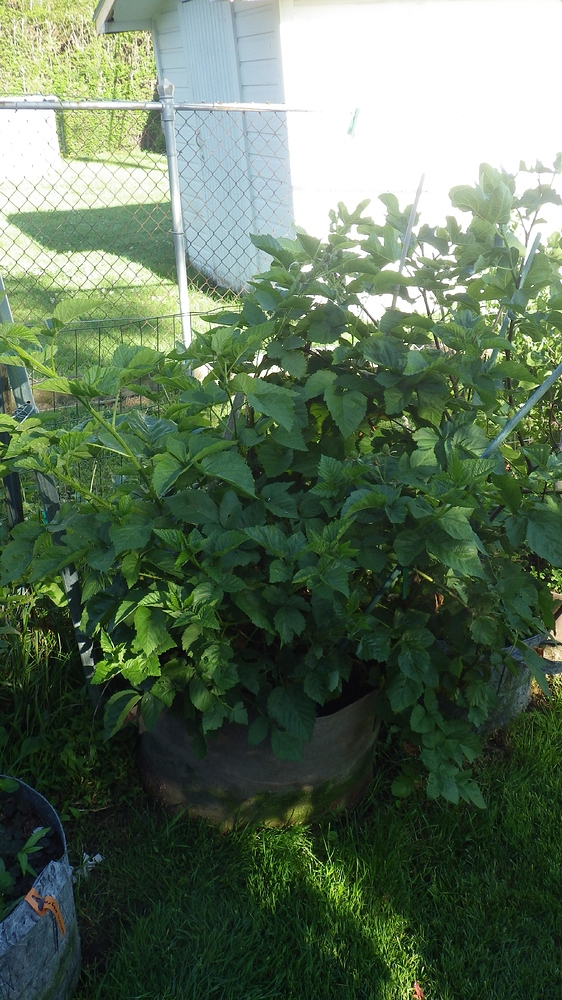 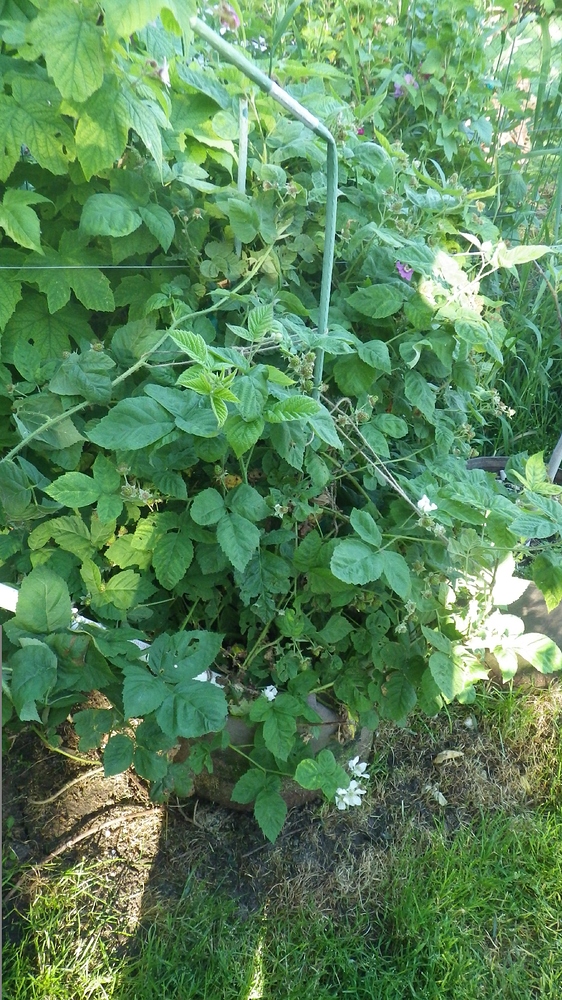 On your plant those canes maybe floricanes and will die over winter, so you want it to grow new canes ASAP. If it doesn’t it will still live, you just won’t see berries till 2022. Whatever new canes grow now, will have fruit next year. If they are primocanes, the current canes will fruit next year.

Hi! Any one knows if it’s worth to plant a Jonatan apple tree?

Jonathan is pretty tasty @Luisport and makes a good baking apple, when it was just red delicious, gala, braeburn and jonathan i think Jonathan was the best option, Has a light amount of that old heirloom apple flavour. I do think there are better apples and it seems like jonathan is one of the colder zone apples? I worry if it doesn’t gets cold when they ripen for you and what your chill hours are? I think you should do the apples that excel in your environment or california, spain, or all those varieties that excel in the congo and maybe you defoliate the leaves?

Thank you my friend! Well i live in a apple area. Of course some varieties nead more cold than others… my apple trees are doing well specially the red flesh ones.

Jonathan gets fire blight bad, that’s what killed mine

Like @Hillbillyhort Fireblight is my biggest apple enemy and is all over, is that a issue for you? You do not find out until bloom time usually so its a bit heartbreaking. Most of the red varieties i have found were weak to FB and right now i am trying era and have high hopes for it. What is your chill hours and can you find out if FB is a issue locally? My thoughts are its not such a issue in europe in general