Glad you enjoyed it too. Like you, I learned a lot from the article besides about Phylloxera- but that too. I read a lot but often its useless things. haha I found this because my city is getting a huge distillery and cooperage (barrel making company) so I’ve been trying to learn about the industry . Fun to come across a fruit tree related article.

That is very good news. It will increase the employment and also more revenue for your city. Is it by american investors or foreign investors?

Thanks for asking! Its actually a fascinating project that I couldn’t be more excited about. The distillery is a 36 million dollar campus with 3 barrel houses, the distillery itself, the bottling and packing plant, and so on. They are also going to have a little storefront in downtown Nashville on Music Row (the tourism area) and they are going to run tour buses back and forth from there to our town for people to tour the distillery and a small winery across the street. And yes, it is a PURELY American owned and operated business with a fascinating history. In the late 1800’s this particularly whiskey- which you’ve never heard of but which I can’t tell the name of yet- was the largest in the USA- bigger than Jack Daniels, etc. It was located in the county where my City is (though in a neighboring city). Eventually they sort of got out competed by other brands and started loosing market share and prohibition finally put them out of business. Fast forward about 80 years and the great grandchildren of the original owner were driving through our county, knew their family’s history with the whiskey, and wanted to see where the original business had been. They stopped and long story short just fell in love with the idea of restarting the business and they were wealthy and did it. That was about 20 years ago and they’ve been in another county during that time. They built it back into a pretty good sized but still small distillery, then one of the largest spirit companies in America bought them out. So now they want to keep the label and the history and move it back where it all started. Fortunately they are coming back to our county but changed to my city after we competed hard to get them. Besides the 35 million investment and about 200 employees within 5 years, a Cooperage company has decided to follow them here. They considered 4 other cities and we fought like hell (but did NOT give too many tax breaks to make it worth while the way many cities do now days) and they have also privately committed to coming here- though not publicly yet. That, too, is a fascinating business. Who knew Whiskey Barrels can only be made from white oak, the best trees come from the Shenandoah Valley area so they will be getting trees there and shipping them here by rail instead of just cutting White Oak Trees closer to home. They say it makes a big difference.

OK, I’m sorry to bore you to death with all this useless info, but obviously I’m proud and excited and looking for a chance to talk about it! haha. Now everyone here knows lots of useless info about an unknown distillery coming to middle TN! haha

me too! may have to stop in if I’m ever in your neck of the woods to check it out and come see your orchard. love whiskey and bourbon! wouldn’t be evan williams would it? their product only started to show up about 15 yrs ago up here. its my replacement for the over priced jack daniels i used to drink. a lot of people up here drink canadian whiskey but it isn’t even close to the flavor of American whiskey which i consider real whiskey. also enjoy a occasional good scotch.

I’d love to have you stop by Steve! My orchard is always open for tours. But the proposed distillery hasn’t even broke ground and aren’t supposed to be open for 3 years! Part of the reason for the long time period is that they have hired some specialty still making company out of Germany to make something called a continuous still, which is a completely different process than pot stills use. (though the difference is unknown to me) They are actually building it in Germany, then breaking it down and moving it here- at a cost of almost $1 million!!! Just for a still!
It isn’t Evan Williams. Its a very, very small name in modern times and you almost certainly haven’t heard of it. Its been over 100 years since it was the largest whiskey seller in America, and it only restarted less than 20 years ago as a micro distillery. Honestly, even I can’t quite understand how they are basically going to go from being a small micro distillery to a multi-million dollar giant in basically one step. But the company that bought it and is doing the big expansion can afford it.
It seems silly not being able to say the name, but we’ve agreed not to make it public until they roll out their big marketing campaign announcing it. It wouldn’t be hard to figure it out, but I just don’t want to be on record naming it or confirming it. But you wouldn’t have heard of it and probably can’t even buy at at your local spirit stores now.

I work for a liquor distributor. We did the bourbon trail last October and it was incredible. Do mind reminding us of the name? The Benziger family that has wines did that with a beer still. They went to Germany and bought a hundred year old brewery. Which is actually quite new in Germany and shipped it back to California to make their own beer.

Jeff, as I said above, I’d be happy to say the name but they have asked us not to reveal it until they roll out their big announcement and ad campaign. Seems silly since I’m sure people can figure it out, but we promised not to reveal or even confirm the whiskey name until they allow us to, so I need to keep my promise. So far it hasn’t been named in any news stories or on their website or anywhere else I’ve seen. I know it seems ridiculous to try and keep it a secret and you could probably figure it out, but I need to keep my promise not to tell anyone who it is…even though I doubt even you, working in the industry, has even heard of them. Right now they are a VERY small company, so this is going to be a HUGE step for them. I would think most

I wish them great luck! It’s a great business and only getting better all the time. Maybe I’ll see them In our portfolio some day! Good on you for your loyalty and keeping your promises!

I could be wrong . . . but the liquor industry is probably one business that only increases its profit during hard times. And a safe business to be part of. ?

You are correct in most all circumstances. When times are good? People by better and much more high end. When times are bad the dollar ring goes down but usually the volume goes up. Seems that’s always offset each other and bring the profit. I work for a very large multi national corporation. They are involved in weed in other countries as well and will here if the feds.go legal. We have lost over 80% of our on premise, restaurant/bar business but our GP is still great and a great percentage of the lost on premise has come to retail. I’m not sure but I think every state except totally state controlled ones designated us as essential and we never locked down at all.
I’m on my 31st. Year. With hard work and keeping your head down it’s been a great business

Does anyone else find themselves often saying (to some unsuspecting bystander / spouse / partner / your dog) -
"My friend on the forum, so-and-so, said . . . . . . "
LOL Sometimes I think I refer more to my ‘friends’ on the forum, than I do to my actual - (dare I say) REAL, friends? Especially lately, with all the COVID ‘isolation’.

What a great question. And yes, rarely does a week go by that I don’t say that to someone. In fact, I’ve reached a point where I’m tired of explaining “I have this web site where a bunch of great fruit loving/growing people congregate to talk and trade information, and someone there said that …XYZ”. Now days I just say “I have a friend who tells me…XYZ”. Which is true, since I do consider people here my friends!

@thecityman Kevin,
The news about this distillery makes the thought about moving to TN even more tempting

if they need whiskey tasters, I’m their man!

I have a large old crab tree (a wild seedling) near my veggie garden that has an interesting biennial habit. This year most of the tree is loaded with fruit, but there’s one large limb that is free of fruit. Next year, that limb will be loaded and the rest of the tree will be free of fruit. I had always thought of biennial bearing as systemic, affecting the entire tree. Is this common, has anyone else noted this on a fruit tree?

That is interesting. Is it possible that someone may have grafted that limb to a different variety in the past?

Perhaps it is a sport, and that is why it is on a different cycle.

My mother planted this perrenial flower (the one with dried seed pods in the foreground) about ten years ago in a garden in CT. Its flowers are yellow and it hasn’t seemed to self seed or to spread. I collected seeds from the dried pods and was going to try to grow it in my own garden next year. Sorry I only have the picture of the current state and no flowers. She’s forgotten the name so I was wondering if anyone can name the plant? 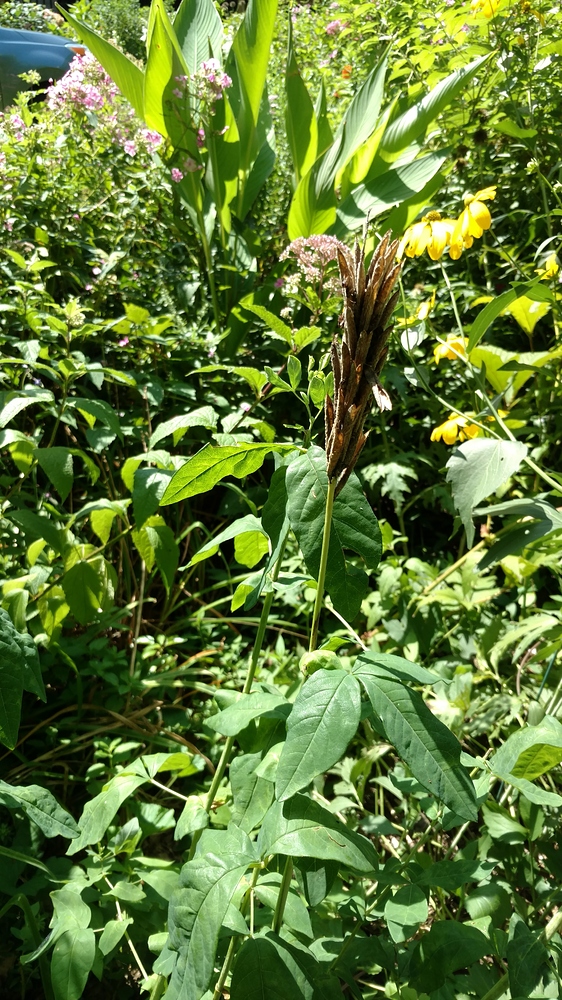 Does anybody know how different the taste of Blue Hubbard squash compared to pumpkin? Does it have the same off-taste? I try do decide if I should try to cook it or give away. I didn’t mean to grow it to the fruit, planted it as a bait for cucumber beetles, but it didn’t work.