On my peppers this year I have what looks like Artillery Fungus / Sphaerobolus. I don’t use woodchips or mulch in my vegetable garden as I don’t have permanent established beds. However I did use black landscape fabric for the peppers this year to help warm the soil. Would it actually be Artillery fungus on the fruits, or some thing else?

My order for a Summerset Peach Tree got cancelled from Rolling River Nursery (Not happy - they show stock). I wanted late peaches so I decided to order two late peaches, Octoberfest and Carnival from GrowOrganic. The only problem is that they are on Citation rootstock which I doubt will do well in Virginia. My plan is to bury the trees below the graft, water them well the first two years and hopefully they will grow as peach seedling rootstock, not Citation. How far do I need to bury the graft in the ground and how long should it take to loose the characteristics of the Citation rootstock?

I know i I have peach tree borer. I tried to cut the trunck open and unable to locate that sucker. Does anyone has a better way of finding it? Or any pesticide I can use to get rid of it??

This late in the year it is likely that the borer has bored down into the soil beneath the surface. Dig down two to three inches and you will likely find the borer. I think I may have found one really deep like 4 to 6 inches. I had roughly 10 trees (may have been more my memory is bad) that got borers in them last year. I found every borer below the surface except for one that I could not find. I just filled the hole with permethrin (10%), let the permethrin drain into the soil, then put the soil back. I saw no signs in the spring of the borer. Best of luck.

I bet your bridge grafts work. It’s just an upside down bark graft (on bottom) then a regular bark graft on top. A tip that has worked for me: some apple varieties have bendy twigs and some have stiffer twigs. For bridge grafts I always cut extra long scions from my bendiest tree. The easy bend helps you put the necessary arch in the scion. I always nail my bridge grafts with tiny nails - a friend called them
escutcheon pins.

With my old trees I would take a metal hanger, straighten it out and stick it in the hole and smush them. If I couldn’t do that then I would concoct some permethrin and pour it into the hole.

I try not to use the permethrin though unless I have to. I’m always afraid of it damaging the tree or entering the fruit of that is even possible.

The ooze are from near the base of the tree above the ground, you think the borer is still under the deeper ground?

I did not see any hole. Only see the ooze with sawdust

Everyone of mine was like that last year - ooze above ground borer below ground. Last year I found most of the entry points above ground and I took a knife and started cutting the path of the borer. Everyone I cut ended up going into the ground. This year I had two borers, one below ground and one that was above ground in a bad cut in the tree. It was very easy to find the one above ground.

I have never had this experience but I have read where the borers go sideways and not down, but all of the bores have bored down towards the ground in my trees.

Her is a good article on the life cycle of the borer and explains why you are likely to find the borer below ground. 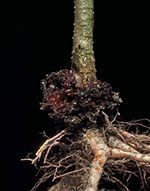 The peach tree borer is the most destructive insect pest of peach, cherry, plum and other stone fruits in Colorado. Peach tree borer can be difficult to control because the larval stage is not easily accessible with insecticides after it moves under...

When I dig the dirt out I am very careful not to damage the roots but you will find the borers can do a lot of damage. I cut down a very nice sized 3 year old Contender that was 80 percent plus girdled by borers at the base. Lesson learned - watch aggressively, act quickly, don’t be afraid of using a knife (if clothes hanger doesn’t work) and dig if you can’t find the borer.

Ok thanks.I will dig down

Did you find the peach borers?

A heavy dose of spinosad (I did like 4 oz gal in two 5 gallon buckets) drenched and then seeped into trunk and it knocked them out for me and then i followed it up with beneficial nematodes a month or two later and they have not hit again since.

Apply in spring time or now?

I would do both just to be safe, If its still feeding the bacteria would kill it now and the Spinosad bacteria thrives in soil its just the ones they sell us doesn’t reproduce so it may or may not still be effective for the next generation if applied now but would atleast kill any grubs that are still sucking on your tree.

I need some advice for my figs in containers and the coming cold over the next few nights (25 degrees). I store my figs in my garage and in a crawl space over the winter once they’re dormant. But even after a few light frosts, several of my figs are still totally green without dropping a single leaf. For instance I have a JH Adriatic in a 15-gallon cloth container that is still fully green, as is my RDB in a similar container, but others right beside them have dropped all leaves. There was a previous high twenties night and I put the most leaf-retentive offenders in the garage for the night and will probably do the same, but wanted some input here.

I feel like I’ve left at least the big pots out through cold nights before, but never kept a record. I’m in 7A and think I usually put them all away around mid-December. Would it be safe to leave them out tonight and push them into dormancy? Do I need to get everything in containers (including some in 20-gallon containers) stored away for tonight? Or can those that are already looking fully dormant stand a few nights in the 20s before going into storage. I will put my small figs away, since they’re in 3-5 gallon pots.

Admittedly, part of my reluctance is that I haven’t gotten the garage organized and cleaned up to make enough space for all the figs yet, plus moving the big-ones is tough on the old back. I could use another few weeks!

I stripped all figs green leaves off before storage around 3 weeks ago. I have done for years and they will go into dormant with no issues.

How do you think figs in containers would do down to 25 degrees? I can get everything stripped and stored this weekend, but doing it all tonight is a challenge… unless the result would be damaged trees.

It should be OK because one of the night before I stored them 3 weeks age and the temp went down to 24 degrees.