I have had a few apparently successful persimmon grafts quickly start losing their new leaves. They drop off right at the point of attachment, leaving a brown pit. Since I have seen fine web filaments in the vicinity, could this be spider mite damage? Or something else? A few entire new branchlets lost all their leaves and shriveled up. Here’s a picture: 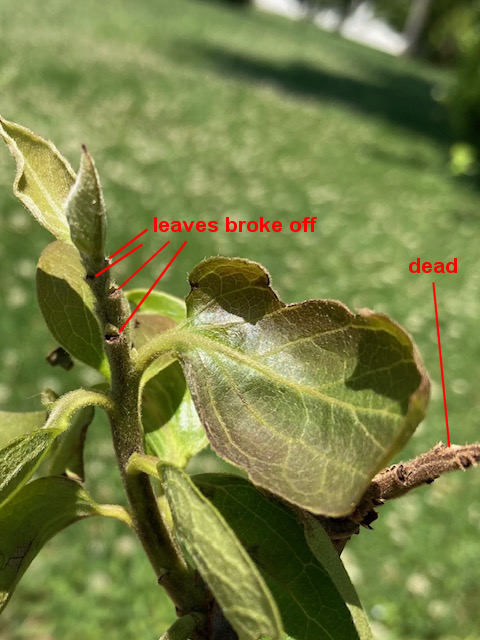 Yoda, use the force!
Sorry, I dont have anything other than that

I called up the Force, and got what I think is a flash of insight…

I had grafted hefty 5/8” scions to three vigorous two-year shoots from the stump of a male D. virginiana. Two were done by clefts, one by a bark graft. All three started off great, but while the bark graft shows no signs of slowing down, the two clefts have lost some new leaves. Some, not all. They seem to be stable now.

It seems that the bark graft, with greater cambium contact with the scion, had fully “opened the spigot” for nutrients to flow. The two cleft grafts had relatively less cambium contact. It seems that the thick scions had substantial reserves to initially draw on, but then further growth depended on the rootstock. I concluded that dropping some new leaves and branchlets was the scions’ response to try to bring the nutrient flow into balance with the growth - the grafts had not healed up enough to compensate for the decreased resources in the scions.

So, I think I just have to give the surviving leaves and shoots time for the graft to further knit together and fully open the pipeline.

May the Force be with you,

Can you take a picture less close up? I see some black veining on 1 leaf that can be a sign of something concerning in persimmons. 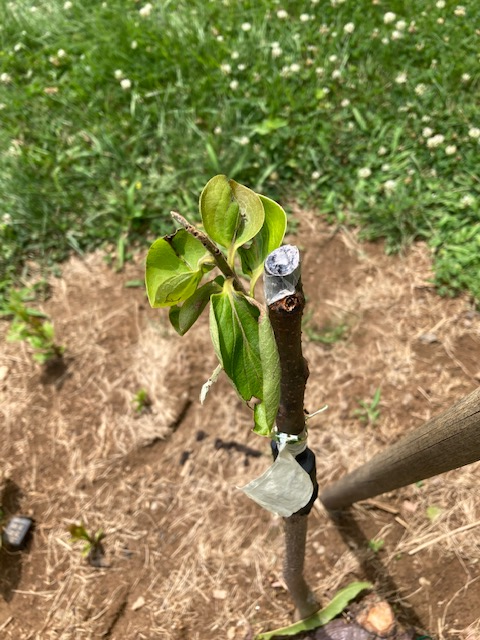 @tonyOmahaz5 , I would not expect graft incompatibility, though I suppose it is possible. The scion is Tecumseh grafted to D.v. I have been doing battle with aphids on and off, the kind that causes the edges of leaves to roll up. Using a combination of homemade Dawn/vegetable oil insecticide soap spray plus periodical water sprays to try to keep them in check.

Another thought I had today is that maybe the black Temflex used for the grafts is now getting too hot, though callusing ought to have completed by now. They get a lot of direct sun. I just wrapped aluminum foil over the Temflex to see if that makes any difference.

An afterthought - my initial Temflex application stretched and split. I thought it was too soon, so I reapplied Temflex. Could this have been a mistake, and I should remove it?

I had a DV rootstock once that was incompatible to Hybrid and Kaki with a total of 3 separate grafts.

Me too, and what’s more, I have discovered that some D.virginiana selections don’t accept kaki grafts at all. These are Juhl/Yates, Early Golden, U-20A to name a few. Some are not so keen to accept kaki but do accept some hybrids: Prok, H-118. Others will be tested in the future.
In general most wild D.virginiana seedlings accept kaki and hybrids quite well and make long lasting union.
Exceptions, as noted above, happen and can be regrafted with individuals that already formed a good trees with kaki grafts. Scionwood for that purpose can be collected from suckers.
Looking at the pictures I am inclined to agree with Tony that the main cause is an incompatibility of rootstock with scion.

Obviously if it is an incompatibility between the D.v. rootstock and a kaki scion, it is fruitless (pun!) to persevere with this. I grafted Tecumseh (kaki), Gora Goverla (kaki/D.v. hybrid), and Garretson (D.v.) to the three shoots from the stump of the large male virginiana tree I cut down. The Tecumseh is the only one with the blackening near the veins, which indicates it is an incompatibility issue. Hopefully the other two grafts will make it. Since three grafts around the perimeter of the stump would help them grow together, assuming Tecumseh is no good, I’ll cut off the graft and try another hybrid in its place next year. I appreciate the tips!

Edit: According to a past post by @Hillbillyhort, older D.v. rootstocks - as in my case - seem to be a factor in graft rejection.

Some are not so keen to accept kaki but do accept some hybrids: Prok, H-118. Others will be tested in the future.

I had 3-for-3 success with Miss Kim on Prok, using bark grafts. Meanwhile two Saiyo grafts failed but that could be my grafting technique. The Saiyo sticks were thin. I had 2-for-2 success with Saiyo using W&T on small seedling DV rootstock.

I guess all you can conclude from this is that Prok will accept some Asians (i.e., Miss Kim). Re hybrids, I’ve also had decent success grafting JT-02 to Prok.

I’m suspicious and don’t have any proof one way or another.

@Barkslip Not really, but I think that ploidy level doesn’t play any role as diploid lotus easily accepts hexaploid kaki.

@jrd51 You are probably right with Prok. I’ve only tried one asian with it and it wasn’t happy so I cut it to regraft later with something else.