Came across this article today, aimed mainly at commercial growers but might be helpful for those deciding on apple rootstocks. The results are pretty consistent with other rootstock articles I have read. I have some G969 on order from Cummins to experiment with. 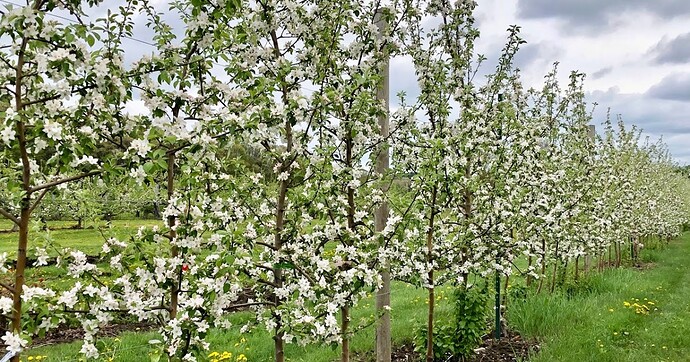 2014 NC-140 Honeycrisp planting at UMass Cold Spring Orchard, 13-May, 2018 W hile recently working with colleagues on a rather compreh...

Well, if that is correct, would explain lack of growth in G202. My G202 didn’t grow well either…but at least the ‘take rate’ on the grafts was excellent.

Clements always cracks me up: “M.9 looks good, but who wants to lose trees to fire blight? Ditto for M.26, that one needs to be buried (literally).”

Nice post. Thanks for sharing. I tweeted a thanks to Mr. Clements.

I have some G969 on order from Cummins to experiment with.

I just checked their site and I didn’t see any 969 rootstocks available. Maybe they’re sold out now.

Well, I do have a Liberty on 202 and it’s done decent, but the Winecrisp on it, plus a Golden Russet on 222 have been been runts, even after 3 years in the ground. I’m seriously considering moving them in March to better soil. If they don’t perk up, they’ll have to go. I should get better growth after three years.

There are three G16 trees in the same row as them, and they’ve done very well. Good growth, and nice wide angled branches. I hope the two Grimes Golden’s give us a few fruit this year. Even one of the GG was a 7/16" caliper tree and it’s thickened up nicely.

G. 890 might be a good second choice. It has an unusually thick trunk. That doesn’t mean a lack of precocity. The idea is to have a dwarf orchard with a minimum of support.

Looks like 890 is the rootstock closest to standard as you can get (50-60%). I have a Gold Rush on it, three years in the ground. Not a lot of growth for that time span, but it’s sitting next to those two dog trees, so it may also benefit from a move to better soil.

I have two on G202 rootstocks. One is stingy with fruit the other one had a great yield of fruit last year. Different apples but within about 30 feet of each other. I have not been too happy with the shape of the trees, really spindly looking. Not sure why these G series trees look that way. I am in the process of replacing the trees with another rootstock choice. I have wasted more years than I like with the rootstocks waiting for fruit of any amount.

I am in year 6 of a number of varieties on G-11 and they have been productive similar to the article but some are starting to runt out in the Georgia heat. That might be my fault for letting them over crop for several years and not giving them enough nitrogen.

G-969 looks interesting due to having more vigor plus some other articles I have read stated G-969 had the potential to produce a free standing dwarf tree.
Cummins must be out but you can get them from Copenhaven Farms for $2.50 each if you are willing to order 25.

Looks like 890 is largest you can get? You mean of the Geneva roots.

Yeah, I should have said that 890 is the largest Geneva RS, know about M106 and 111. My big Winesap might be one of those as it is a very big tree. I got it from Lowe’s and it had “semi-dwarf” on the tag, but it sure doesn’t look like one. The only reason I thought it may be a M7 is that it usually has suckers that grow off the rootstock. Doesn’t really matter though what it is, as long as it produces.

I also have a pretty big Macoun that was supposed to a M7, but it has produced some burr knots, which isn’t typical of that RS, but is on a 111 tree.

And speaking of Winesap, my mother has one that was supposed to be “dwarf” from Stark Bros. around 1978 or so…it is probably 30 feet tall and one year probably had 15 or 20 bushels on it as a number of limbs broke from the weight! Still a good tree, but often biennial.

My experience was that G.890 grows about like M.7 in my soils. But it is way more precocious. I had a nice harvest off my Suncrisp/G.890 in year 3 (planted spring 2015, fruited 2017). However by fruiting, it slowed down relative to my M.7 trees. My M.7 trees kept growing wood without much fruit (none on Harrison x2, Enterprise, and only a few on Zestar relative to its TCSA). Though to be fair Zestar would produce more fruit on M.7 except that it is first to bloom and kept getting fried by frost in my backyard.

I have several trees that will go in my new orchard on G.969. They’ve either been in pots or moved several times. They have weathered that abuse OK. I think the ones I moved to in-ground last year weren’t too terribly happy since they didn’t get much TLC and water in sandy soil.

‘Goldrush’ is a special case. My sad experience is that it has the qualities of being both non-vigorous and precocious enough to be prone to runting out.

I don’t have enough degree days to justify trying again. If I did I would move to more vigorous rootstock, maybe up to M 111. I wouldn’t let it bear fruit until it got to a size I could live with, or nearly so.

Happy to discover here that G969 does well in rows. Thank You for the UMass post! In 2018 I ordered G969 rootstock from Cummins for two reasons. The variety can be a self supporting tree and does well in sandy soil. I had planned for traditional 15 foot stand-alone trees. Now I learn that I can do rows with 5 ft spacing.
I grafted 4 pcs of G969 rootstock from Cummins last spring to Golden Russet, Honeycrisp, Mutsu & Newtown Pippin. Vigorous rootstock was too large for any scions I had, so all four were a one-sided graft. All took. Good growth! Ordered 6 more this spring. Grafting Baldwin, Keepsake, Hudson’s Golden Gem, Gala, Northern Spy, & Roxbury Russet this spring! That’s a 50 foot row of eating/pie/cider apples in the making! WooHoo! Happy Dance! I’ll have room for more trees!

How’d that work out, georgep ?

I read that G969 did well in sandy soil and was self supporting. That’s what’s behind the selection of G969 for me. The other half of this personal orchard will be M111.

The G969 grafts are vigorous growers. IMHO slightly more than M111 growing side by side. The rootstock I’ve been getting are about the diameter of my little finger, so my grafts have been one-sided rather than whip and tongue as I have had no scions near that thick. Of 12 grafts so far, one did not take and I lost one to fireblight. I’ll do another 6 next spring. The surviving 10 will go into the field next spring. It will be another 5-10 years before I know how well this is working. I keep reworking the intended layout and suspect it won’t be finalized until a day before the the trees are planted.

Sort of related topic, I recently toured Scooters Farm in southern NH, a recently planted organic apple orchard, with B118 and M111 on 8 x 18 spacing. 8 ft between trees, 18 ft between rows. His goal was self-supporting apple trees rows on a sloping hillside. While he installed drip irrigation for the new trees, he did not want a permanent commitment to irrigating the trees. So its not just B9 being planted in close rows.