We’ve been busy with a lot of stuff and didn’t get to this tree soon enough. Picked it Aug 15. Probably could have picked a week earlier as ants were just starting to get into some of the pears around the stem. Darn fine tasting pear. Very sweet and juicy. No noticeable taste from the skin. This particular sample was in the fridge a couple of days just to cool it off before eating. Softer/juicier toward the neck and crisp toward the bottom. Very sweet throughout. Young tree, so some of it’s fruit didn’t color/shape up properly. On fairly poor soil on OHXF 97. It’s a winner and hasn’t been hit by any FB yet, so hopefully it can stay that way! 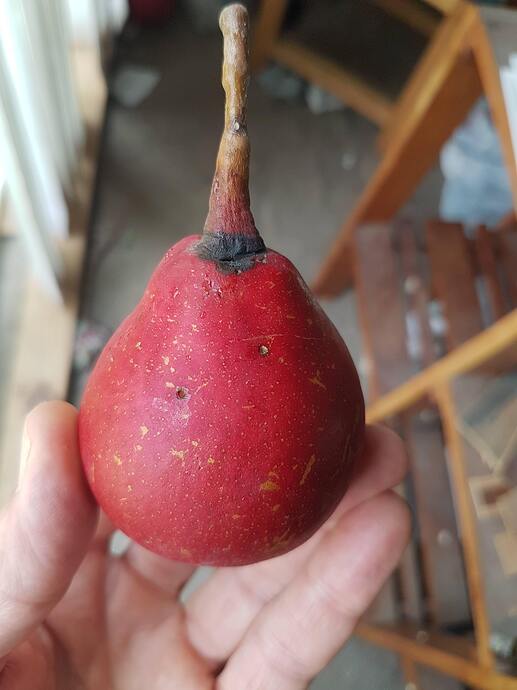 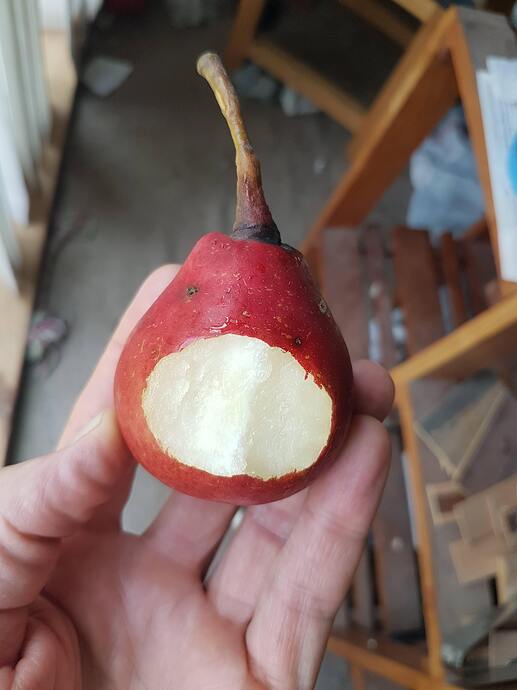 Clark! Happy summer! What a great color for a pear. Is it an Anjou? Its beautiful. Name please. Or is Red clapps the name?

I’m not Clark but wanted to give him a heads up because he started a thread on Clapp’s favorite (which is not Anjou). It’s really a wonderful pear. It was mostly ripe right off the tree.

I don’t have the original variety, but instead have this tree which is a sport of the original Clapp’s favorite. Red Clapp’s favorite was supposedly found in Michigan. For some time, it was marketed as Starkrimson by Stark Bros. It is also called Red Clapp’s Kalle. I think they are the same thing but you know how pear stories go. Red clapps favorite is a winner for sure. I need to graft another as a backup.

I also have red anjou but my one tree has had a number of problems which are most likely rootstock related.

I would love to grow that pear.

I don’t know how I missed this post but that’s a great looking pear. Thanks for posting photos! Love what I see with that pear! Clapps favorite pear is one of my best pears! The red clapps favorite looks excellent!

I have red clapps in the front yard by my mailbox. Thanks for the post, I’m happy it was “the other pear available” when I purchased Bartlett before finding this forum.

So sorry, the minute I see a great looking pear I think of Clark. Your red pear is beautiful. Still wish I could grow it. Lucky you!

Thank you for the wonderful compliment being an experimental pear grower has truly been rewardarding. We love your many posts through the years from the United States and now France @mrsg47 . Many of these new and long term pear growers will take the research i did and build on it. This post is a great example of @snowflake growing a pear I have not had the fortune to graft yet and his is already fruiting. It’s a beautiful colored pear. John we have a thousand questions about this pear but you already answered many with this post like how does it taste? What does it look like? This post may have 100 people growing this pear by next year. When I saw pears like Harrow delight and Harrow sweet become widely grown it was largely due to the fact @alan @olpea @scottfsmith are growing them. Literally I never had heard of them but reading @alan @olpeas post the first time on gardenweb many years ago made me want to grow that pear. @Olpea normally gives all the credit to @alan for Harrow delight but it is largely grown here based on the fact he grows it in a Kansas orchard. @39thparallel works relentlessly, he frequently comes here to get scions of unusual pears to graft in his nursery. @fruitnut taught me many things about pear growing and grows some of the best bosc pears ever seen. @mamuang and I literally shared pears with each other years ago. She is a true expert on pear growing! If she had many acres of land I suspect she would have an even more enviable collection of pears. Her pears are some of the best! I say all this knowing the next generation of pear growers will be 100x better than any of us ever were. Different variety of pears were once very difficult to get. I did all I could to advocate pear growing so it may some day become as popular or more popular than Apple growing. Thanks @snowflake for posting this thread you may personally be responsible for hundreds or more of these pears being planted. It makes me want a red clapps.

I’ve only been growing pears for about 20 years but don’t have the variety that you do. But, I hope to be able to share my experiences as I pin down info that could be helpful, particularly since many of these varieties were shared with me (by GRIN), and I think the spirit of that would be to share our findings.

I’m hopeful that red clapps favorite can be fairly resistant to disease pressure, but it’s young (8 years old) so time will tell. So far, the tree has been completely clean, while others nearby (deveci and crisp’n’sweet) have had some issues.

What I notice is clapps favorite are highly resistant to all disease except firelight. They are known as a disease magnet because of that short coming. I don’t know if that is true of red clapps favorite or not.

I’ve been keeping a close eye on it for strikes as I suspect the resistance is somewhat low. I have Parker and Flemish beauty immediately next to it, and their resistance is lower too…but I haven’t had much for FB on them yet (one was my fault as a branch rubbed on a t-post where I was trying to pull down a branch and made a wound for FB). I tell myself that my humidity is usually lower, so maybe I will be safe, but I know that’s not entirely true…as I walk through the wet grass in the morning grumbling about wet shoes!!!

I had a lot of grasshopper damage last year (eating bark) and was worried that would lead to FB on a bunch of the pears, but it was very late summer/early fall, so perhaps the risk was lower then. I would say that Red clapps favorite is one of those pears where I will enjoy the fruit immensely as long as it can survive, and hope that’s a good number of years. I need to back up some of my varieties in case the worst happens. I haven’t been the best about that…but there is always plenty to do, and I move slower every day!

My Clapps seems to be a PC magnet, even with sprays of Spinosad and Surround, but my other three varieties were fairly clean.

Spinosad is good for moths but not for weevil like plum curculio.

Gee, Clark you are one brilliant and humble pear grower. I have no idea how to get Clapps Red here or Your ‘Little Yellow pear’ wouldn’t they both make an amazing looking tree! Thanks Clark and Snowflake!

This French site has the pear listed. I guess it’s some sort of fruit growers group?
http://croqueursdeprovence.fr/

Years of growing pears taught me to be humble because there is so much we don’t know. There are times when I find my own ignorance intolerable to myself to only be surprised by someone calling me an expert. The new pear growers might appreciate my efforts and know my intentions are well meaning. I’ve found most of the time changes are for the better. Anxiously I await changes to our current pear orchardists population for the better. @scottfsmith has done so much for everyone by building this website. Like him my motivation has never been money driven but rather only to make the world a better place. Those of us who made money elsewhere have that luxury and obligation to a world that was generous to us. I’m fortunate to have the opportunities to raise such a vast wealth of pears. The usda ars grin program at Corvallis made many pears obtainable that would have otherwise been lost.

Yes it is site for growers. There doesn’t seem to be Clapps Red here. They have heard of it but they do have and grow ‘Clapps’ Favorite. I am so stuck on your red pear. I will continue looking. And, thank you so much for your time and effort.

I found a shop selling Clapps Red. I asked them and they do ship to France.
Shipping to you isn’t cheap but the trees are and from what I read they have a good reputation. 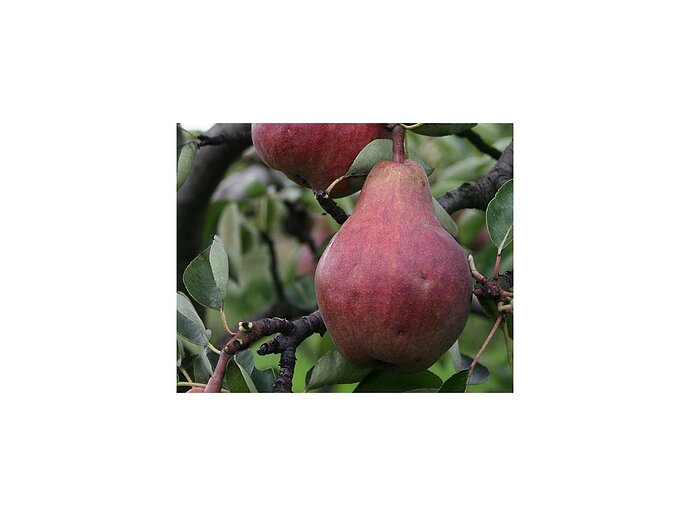 I translated the site it is Czech. They say the tree can tolerate the worst conditions! I sent you a pm also.

https://www.pepinieres-uzes.com. This nursery has clapps favorite, but also an amazing array of pears. They specialize in historic varieties.

If you place the site on google, then press translate you will be amazed.