Hi Everyone, longtime lurker here, with a question that’s finally prompted me to post!

One of our peach trees has sent up an unusual watersprout. Normally we prune these, but this time it’s pretty spectacular – the rootstock seems to be producing scarlet red leaves. 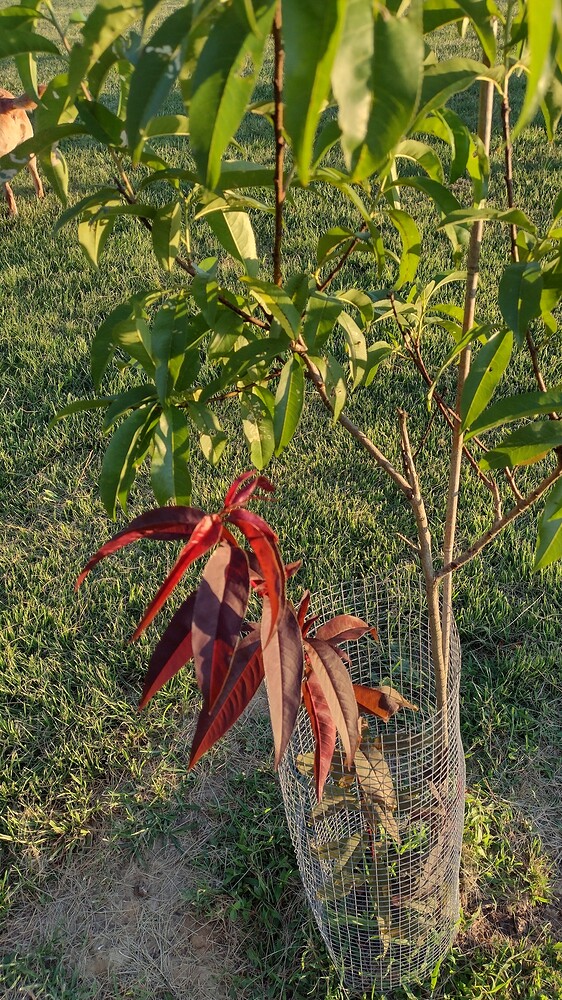 Unfortunately, Mr. Goodswiss misplaced the tag after planting, so the peach variety & source are unknown. I’m guessing it’s probably Citation rootstock, but being the “skittles” gardener that I am (i.e. taste the rainbow) I’m wondering if there are other commercially-available red-leafed peach rootstocks that, ideally, bear edible fruit? After searching here – and Google – it looks like Rubira is a contender, but doesn’t seem to be available in the US.

Planning on rooting a cutting of this particular fellow next spring in the hopes we can grow the tree out to fruiting, but it would be fun to compare/contrast with some other known red-leafed varieties.

Look into Citation Root stock, They are very common, red leafed, and fast growing at my place.

Also, here is a thread about all this:

Two springs ago I had a second year Apricot tree die shortly after leafing out in the spring. A month later from the base of the trunk several shoots popped up that bore red leaves - they looked like the red leaf ornamental plums. I let one grow thinking that it might be a nice ornamental tree near my house, or that I could graft to it later (if I ever get the skill down pat). Last year the tree grew nicely and it had white plum-like flowers, and this year as a larger tree there were more flo…

I think that “Citation” is off-patent. The protection of the trade name persists so it’s sold generically as “red leaf peach”. Or is it “plum”? I forget.

From what I have heard is there is red leaf peaches but they don’t taste good. Very ornamental though.

My neighbor has a few red leafed peaches growing. He gave me a few seedlings last year, which are also red leafed. When they ripen I’ll have to make a report on the taste.

There are red-leaf peach varieties such as Bonfire and Flat Wonderful that are marketable for fresh eating. Then, there is a known red-leaf peach rootstocks like citation with edible fruit but inferior quality.

For those who like to experiment and grow peaches from seeds, you may find some of those seedlings that could have red leaves.