Yes it has some malus niedzwetzkyana in it .

links (second one explains many different threated trees , and good to browse.) 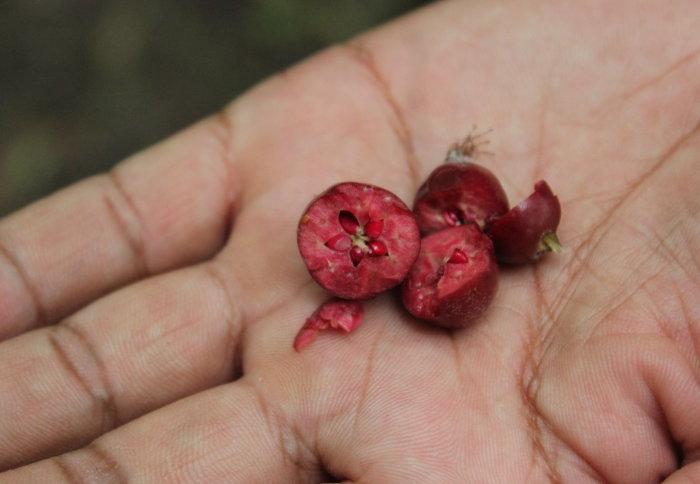 Niedzwetzky’s apple, a relative of the ancestor of supermarket varieties, faces extinction as less than 150 trees have been found in its native land. 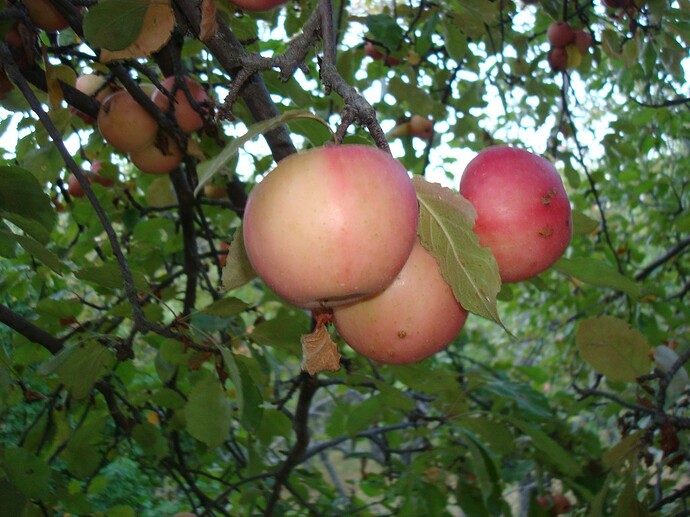 The last remaining Niedzwetsky Apple trees are found sporadically across Central Asia’s fruit and nut forests. The species is a wild relative of the domesticated apples that line our supermarket shelves and is of global importance as an...

BlockquoteThe apple is native to the foothills of the Tian-Shan mountain range in Central Asia, with the largest remaining populations in Kyrgyzstan

The apples were created by Markus Kobelt, a nurseryman in Buchs, Switzerland, in the Rhine Valley overlooking the Alps.

Kobelt developed his prized fruit in 2010,

Here are some benefits you must know:

allegedly by cross-pollinating Royal Gala and Braeburn apples with some other, secret red-fleshed varieties that weren’t known for their taste. ,optimal hydration,

It is of a good content of soluble fibres, it contributes to limit the absorption of blood cholesterol (parameter to be controlled within the framework of the dyslipidemia)

It is balanced well in fructose and glucose, its juice can use the preparation of drinks of the effort for the sportsman

It is polyphenol rich , genuine antioxydant natural which fights against the degeneration of the cells, it contributes to the prevention of the cardiovascular diseases and certain cancers.

This is of heating low value, it is a true cut-hunger “allied thinness” for a balanced food (the tasting of a raw apple obliges at a degree and an important time of chewing which allows a real feeling of satiety),

dmehta410, if all that is wonderful, they have some fantastic properties.
But they taste like burning rays of acidity hahahahahaha.
I like the fruit to have healthy qualities, but I don’t eat it for its healthy qualities, I eat it and I like it for its flavor, and in general I prefer subacid varieties to varieties with high acidity (especially apples).
I assure you that no matter how beneficial the Redlove Era variety is, a simple Rubinette is a million times more delicious, this is an irrefutable fact.
If I want to fill myself with antioxidants, I only have to harvest the Queen Garnet plums, which apart from being very healthy are delicious.
But Redlove apples “are very acidity” ajjjjjjjjjjjj.

Suppositories are also beneficial to health, but almost no one likes them.
The flavor and texture is what mainly determines the quality of a fruit variety, the color is quite secondary.
What’s more, a blind man’s opinion about the taste of Redlove apples would be interesting.

Clark, there are quite a few studies. U of Michigan for instance. Also N. zealand and Japan.
As “everyone knows” (there goes that ‘settled science’ again ha ha)…red fleshed carrots, peppers, okra, and so forth have more antioxidants and anthocyanins than regular colored carrots, beans or whatever.

Same with apples. Red peels are slightly healthier than green ones.

And deep red flesh multiplies the effect…pink flesh somewhere in between.

I’m not the lab scientist…so I don’t have a study to publish…but they’re out there.

Cranberries, blueberries, blackberries…are healthier in that sense than most apples…maybe even the red fleshed ones.

As far as tastes very sour as well with bitter can be added to smoothies
like coffee /tea Milk or fat binds with the bitterness
different climates , and different cultures or peoples tastes are different
could also ripen the apples differently in different climates

You see it all over the forum, where one thing is good one place, but bland in another
maybe to much heat, and sometimes not enough,
but could also be just different Opinions Beauty in the eye of the Beholder.
Cannot say your Apple is better then his

How long did these apple store for see that a lot as well sometimes improve with age
You seem knowledgeable so I think you know better,
but just saying since it is a forum, and other might not know better,

I agree with your opinion Sir…but we cannot deny the fact that due to of it’s High in rich nutrients…and that’s why we are getting almost double price for red love Apple then the traditional delicious varities from market. @Jose-Albacete

Cranberries, Blueberries, black Berries I believe is less in soluble Fiber then the apple
Also they are good for Lungs

So I do not go for what is more healthy
Drinking pure Cherry juice is very good for arthritis , but tastes like lemon juice
, and lemon Juice is not something people enjoy unless of coarse prepared right diluted
just like this apple might be.

If I had gotten started in middle age instead of nearing retirement, I am confident I could come up with a new and tastier variety than the Red Loves…and I just may be able to anyhow…as I have 30 red fleshed varieties and lots of sweeter and better keeping apples and better textured apples to cross them with. But it all takes time (and then there are the mishaps like first intentional cross and saving seeds and they sprouted in storage before I knew and could get them planted…and then last year 100 percent apple crop lost to freezes) This year I didn’t have pollen from the best varieties available…but I’ll have red fleshed apples and will be saving seeds to plant next spring.

I am sure the Brix can be raised, and probably the acid and tannin can be reduced for a good eating dark red fleshed apple. (And the Japanese or others are likely to do so by gene splicing if it can’t be done by simple breeding.)

(quote from discussion, and quote from Smithonian (reduced )

, Malus sieversii, much larger than other wild apples. soft and have a **very plain flavor disliked **,” domestic = 46 percent of the domestic apple Malus sieversii 21 percent European crabapple, Malus sylvestris; the other 33 percent uncertain origins. A IDEA cross & start over using M. sieversii , and instead of using already cultivated apples (with Euopean crab) use our wild ones, and try to match these Numbers (46%+ 21% + 33% unknown) We have a bunch Florida Crab apple, PNW nati…

At least I know many will.
Very Interesting how they can Predict How much acid will be in a cross, but looking at the Halotype
Even before a apple exist , by looking at the genome or what ever they do.

## Genetic region of origin varieties that contributed to apple breeding-Development of a method to automatically track the inheritance of haplotypes of origin varieties- NOTE READ Very Bottom of Article First on link (or see second post on the forum here. ) could give you a better Idea Of what they are explaining (I plan to re read again ) **COPIED FROM HERE ** The Kyushu Okinawa Agricultural Research Center, NARO ACTUALLY LOOKING UP (but could not find good link) Okinawa Prefectural Agri…

You nailed it. @/Francis_Eric
Probably we should all invest in the companies making such technology…for it’s a big wave that’s coming…just like analyzing human DNA to see who your ancestors are, etc. etc.

Ha ha HA
Hopefully The algorithm for the dating site
doesn’t predict My Offspring to be Failures before they are even born
Since I am so great, and they do not want the
rebel in me or my offspring!

On a side Note I have always looked younger then I have been
Now getting older I can say Hey I am sweet like a nice dried Date,
but that’s Not smooth though like Clint Eastwood. (haha not on any date site hahaha)

I’m a Golden One though
I loved these singers when I was growing up yo doesn’t like that song
heard it through the grapevine.
,

Um, yeah. And if you knew the kid was going to be puny and have all kinds of
troubles…how many would then opt for killing it before it was born?

Then, you mention dating… “hey sweetie, can I see your DNA profile before we hook up?”
It’s funny if it wasn’t life in the 2020’s.

So, anyhow, I can see how such a test could be useful (if it were cheap enough) before spending several years for fruit from a bunch of trees that might be ‘losers’.

So, the Japanese are ahead of the U.S. on this. And we don’t know if China is into that or not.

@BlueBerry
I dont disagree though my aronia are one of the worlds healthiest berries they are also one of the worlds hardest berries to sell. The tannons are very high as well in aronia. Could we breed the tannons out? Not at this time with aronia they are sterile. Ironically in a strange twist frequently mixed berry juices have aronia and apple in it. Apples for the taste and aronia for the nutrients. Thankfully i have only a couple of acres of aronia. Dont go all in with red fleshed apples is what im getting at. Red cider is a nice novelty but the market is limited just like aronias.

I bet the aronia is for the color. I don’t think they care too much about the nutrients that don’t show up on the label.

This year I had two of those red apples, the Calypso and the Odysey and they seemed sour, but good to eat, also one of the two was quite early

I’ve made 40-something red fleshed grafts this spring…not a single one of the Redloves.
I have 5 Odysso, and I’ll see if second year fruit is any improvement.