There is currently an agriculture revolution underway which effectively means going back to what worked for thousands of years. Modern agriculture 20 years ago meant something totally different than today. 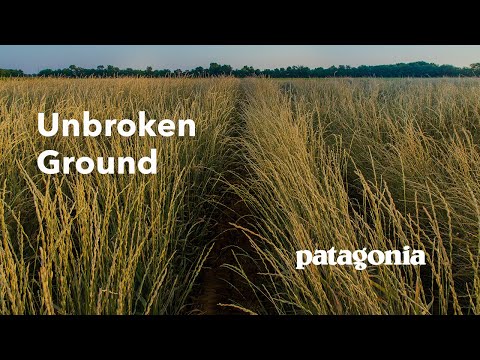 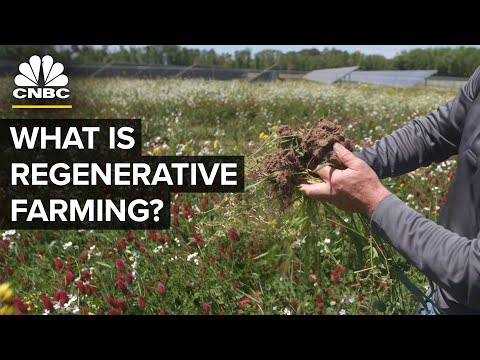 There is currently an agriculture revolution underway

I think we are pretty far off from a ‘revolution’.

What worked for thousands of years was composting…and giving back to the land what we didnt eat.

There is even composting in the Bible and Talmud as well as written on clay tablets from 2000 B.C.

As might be expected there is little information on the origins of composting. The earliest records and archaeological evidence relate to the use of manure produced from animals as a by-product of keeping livestock.  There was a need to both...

" Food takes up more space in US landfills than anything else." 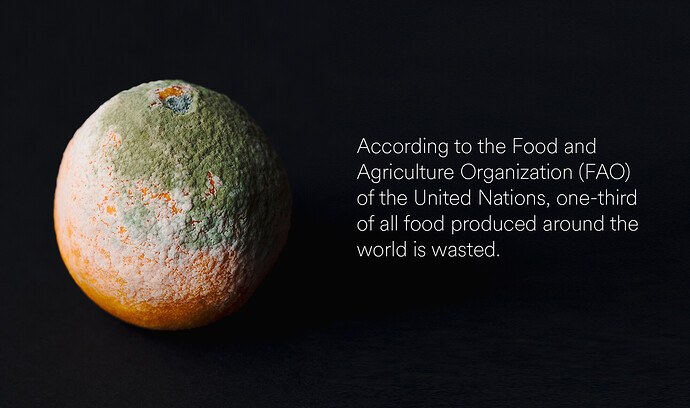 Learn how much food American's waste. RTS study outlines its impact on the environment and economy, as well as provides some ideas on how everyday consumers and businesses can help curb food waste. Download the study today.

When i say revolution i mean literally younger people are taking the bull by the horns in agriculture Back to the land: are young farmers the new starving artists? | Farming | The Guardian . Awareness is up and ultimately consumers will get their way when it comes to what they want Younger generations stand out in beliefs about organic, GM foods | Pew Research Center.

thats horrible people waste so much food! i was raised to use every bit and recycle what isnt fit to eat. our scraps go to the chickens, rabbits and goats. despite what some chicken farmers say chickens will eat anything slightly spoiled. if its real bad it gets buried in the compost. meat trimmings go to the birds or the dogs. my extra veggies and fruit go to family members or others in need like the elderly poor. people need to start to think like the depression survivors did. act like each plate of food might be your last. store several months worth of shelf stable food in case of a natural/ manmade disaster. esp. the younger ones think that food will always be available. remember history always repeats itself.

Yes, it does. I don’t know the name of the next Hitler yet (but there’s bound to be one someday).

"For millennia, people have relied on human excrement or “night soil” as a source of agricultural fertilization

In many regions of the world, human excrement or “night soil” was used historically to improve or maintain soil fertility, particularly in response to agricultural intensification"

We produced over 600 Billion pounds of feces
almost 4 billion gallons of urine. 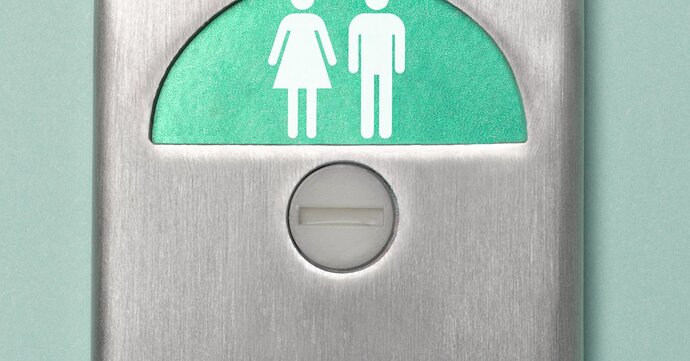 How Poop Can Be Worth $9.5 Billion

A decidedly renewable resource has some very profitable uses

I guess it all goes into the water and becomes someone elses problem?

We have around 8 years to reach the goals by the USDA to reduce food waste by 50 percent… i dont see any of that happening… or any attempt at it.

I think that a lot of people on this list are using regenerative agriculture even if they don’t call it that. Many are adding wood chips. Some will use diverse plants that provide what Rachel Carson called “the balance of nature” to stop bug infestations. Some use cover crops. Many use chickens to eat the worms and fertilize the soil. The problem is that as a society, we are desertifying the landscape. Each year, lots of acres are no longer arable soil due to unhelpful practices. Tilling, synthetic fertilizers and pesticides and not covering the soil lead to erosion of top soil. This has been happening for hundreds of years. We need to rebuild the top soil and the fertility of the soil so we have flavor and nutrition in the soil.
John S
PDX OR

Yes i agree everyone is moving towards it. Think we are 5x further along than we were 10 years ago. Hopefully we get where we need to be in time.

Wouldnt it be wonderful if people were educated that there is no such word as ‘yard waste’.

Modern humans have forgotten that the planet we live on is called Earth. Earth is another name for soil, dirt, ground.

In order to make Earth/Soil/Dirt/Ground… There has to be minerals from rocks, Organic material (humus) that decomposes, air and water that is in the pores and organisms to break down organic material…bacteria fungis etc.

Every product we consume and enjoy as energy and products is ‘from’ the Earth. We return very little back to the Earth.

I think in a thousand years inhabitants of Earth will mine our landfills to recover what we have wasted and not returned to Earth/Soil/Dirt.

The pilgrims only came here 400 years ago… we have made lots of progress since then. We get closer every day to strip the continent bare in our quest for civilization.

Do you think where you live there was once a forest? Was their life there? Did they bulldoze it flat for your foundation and pipes and wires? Were stumps and trees removed? Was topsoil stripped and placed elsewhere? Was topsoil trucked in?

I hope that someday they teach children this… perhaps they will be better Humans of Earth than we have been here the past 400 years.

Once world population decreases enough, reg. ag. will be a thing. We might see it in our lifetime if we are lucky.

There will be more elderly than young it is believed.

An increase in immigration is needed to achieve a workforce to support the elderly. 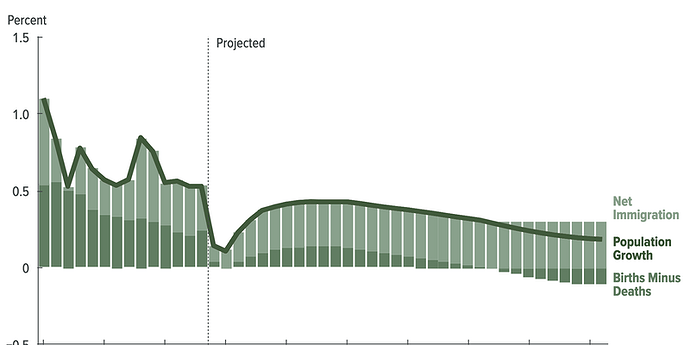 Not all plans come to fruition, and my opinion differs from that of the CBO. But it is possible that the US will grow its population and other countries will lose population. Then reg. ag. will find a foot hold in those places.The European middle ages did see quite a big of reg. ag. after all. At various places, there was the wheat, clover, turnip yearly rotation (which included sheep grazing the clover), the 4/1 rotation (one year of growing crops, 3 years of pasture with animals on), laws for making compost, laws to limit sharecropper’s abuse of the land, etc.

It seems like we’re going to return to regenerative agriculture whether we want to or not. It sure would be a lot easier if we did it voluntarily.

Permaculture is the way of the future - if we want to have a future, that is, imho. And once its established, things like food forest gardens etc take little effort to maintain for high yields. But people naturally resist change. Sadly.

Yes on my property i use Permaculture but there is an overlap.

placed elsewhere? Was topsoil trucked in?

It really is so true that many a plan never comes to fruition, glib.
One or a couple strategically placed nuclear explosions, and the country finds itself back in the Middle ages. (Just like the 96% of the Nation of NIGERIA that still cooks using either wood or charcoal. Even grid-tied solar doesn’t produce anything.) And Teslas might as well be utilized as lawn ornaments.

Or, take the results of the invasion of Ukraine—German industry in less than 8 months has all gas storage full for the cold ahead—and ports started and completed to unload LNG (liquified natural gas) and convert it and pipe it to city and factory distribution points.

In the USA, we’d still be doing environmental impact studies for a year or 10 before even breaking ground!

Unexpected events cause a lot of planning to be effort spent in vain.

If those billionaires that hope to reduce earth’s population … if they’d be first to commit Hari Kari life as the less fortunate might actually inprove. But, their plan is to get richer as the population shrinks.

Oh, and all their “charitable giving”? It’s not to Feed the Children or rural hospitals–NO, it’s to foundations they have control over that are doing ‘social engineering’.

@clarkinks You mention 20 years ago modern agriculture meant something different, but even back then and before there were many voices speaking up about the value of a regenerative approach. Masanobu Fukuoka wrote One Straw Revolution in 1985 and I just started reading a book written 25 years ago by Dan O’Brien, the buffalo rancher in the first video.

Among the first things O’Brien mentions is that the major product of the great plains is grass, with cattle and other livestock just being the means to harvest it, so his success as a rancher is directly related to creating and sustaining the best pastures. He moves his livestock from pasture to pasture frequently to let the grasses regenerate the soil instead of being overgrazed - what the modern regenerative crowd would call mob grazing. In one passage he talks about counting grouse to measure the health of the pastures, “… the number of grouse in a given pasture relative to that of the pasture next door tells the story. Grouse will use the healthiest range they can find. They are right down in it every day and sensitive to the nuances we can only imagine. They are better range evaluators than the most learned of scientists.”

As you can probably tell, the idea of regenerative agriculture really appeals to me and I love doing things like using cover crops and seeing my soil improve or interplanting crops that support each other. The challenge is for us to look to what nature does when we let it work and how we can support and mimic that, instead of always thinking we have to somehow step in and improve the process.

It would be great to see regenerative ag replace most of the more destructive modern approaches, but I’m not sure how that happens when every year is make or break for most farmers and trying something new seems like too big of a risk. Gabe Brown, one of the best-known regen farmers, really only got started with no-till and cover crops because he had three years of crop failures and the banks wouldn’t loan him more money for sprays, fuel for tilling, etc. Thankfully the stories we hear and the success of some of the regenerative farmers is getting out there so hopefully more and more acres will be farmed with a regenerative approach. And definitely, new farmers seem more open to these ideas, particularly market farmers, small scale ranchers, etc. But so many much of the farming that feeds the country is massive in scale and not so easily changed.

I think it starts with appreciating just how complex the systems we rely on are, such as the soil biology or how keeping vegetation on the land can even impact local weather systems and rainfall. We all like the idea of simple “hacks” that help us get ahead, but simple hacks only work on simple systems, at least in the long term. So how do we get more of the large scale farmers, many of which are corporate at this point, to think long-term when so much rides on getting every bushel per acre possible out of this year’s crop?

It’s my opinion trees need worked into crop rotation. My farm was in soybeans, wheat and corn in rotation in early years. Some property was put into fruit back then when i first bought the place. Transitioned my farm to grass and fruiting trees and shrubs in a shorter time than many would think possible.

If I ever hit the lottery big I would consider funding a non-profit to accept compostable waste and generate compost. There is a lot of good waste that ends up in the landfill just because there is no outlet for it. In association with industry and the borough all of it could be turn into a net plus to the community. I would run it with an aim to promote food self sufficiency.

Plus I would get to play all day with heavy machinery