Another historic tree from the fields around my home in Sweden, ME. This was a main comercial variety 150+ years ago. The center of this old one is totally rotted out and hollow, I’ve been pruning deadwood out of the crown and tending to it for a few years now. This year is the first one it’s had more than a peck of fruit on it, bumper crop! 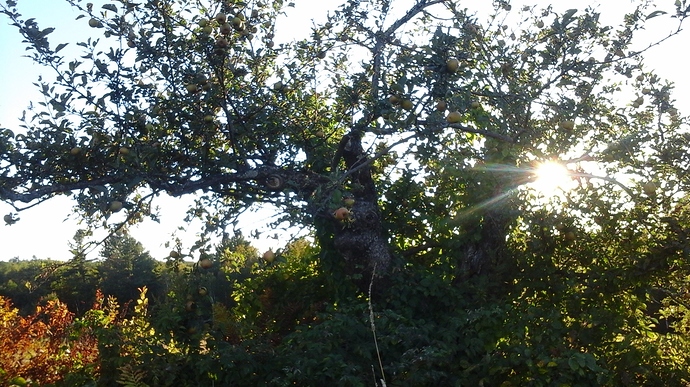 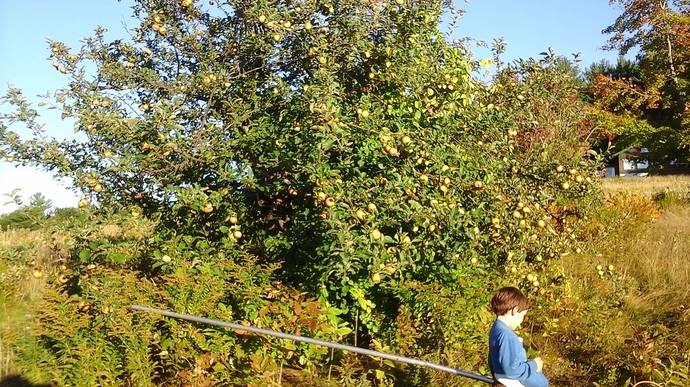 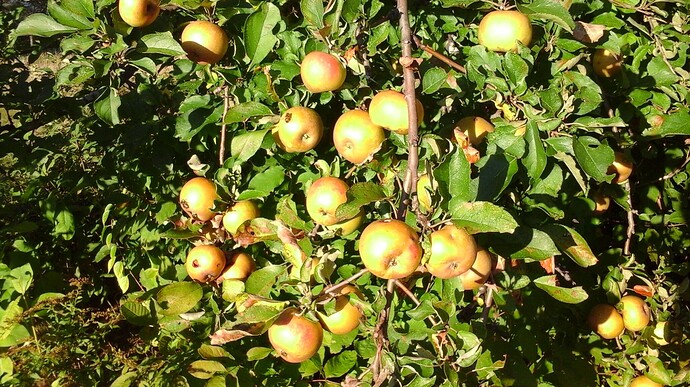 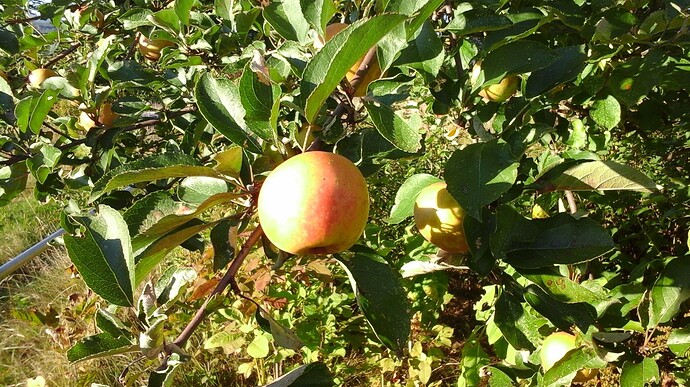 Not ready for picking yet, waiting for some hard frosts to bring these into the cellar. These apples will keep til spring.

amazing that the tree has survived…what will you use the apples for?

Roxbury Russet is another tree I grow but have not yet tried. It is said to be one of the best single veriety hard cider apples yeilding 6% alcohol without added sugar

Roxbury is an all purpose keeper apple, very good for cider(both kinds) after some mellowing in storage. High sugar, high acidity and rock hard right off the tree, the fruit develop a spiciness in storage to make it a superb fresh eating dessert apple in late winter. I will pick this tree in mid Oct, and share the bulk of the crop with the elderly land owners.
The first time I picked fruit from this tree, there were only a handful of small, misshapen apples in late fall, which I sampled as the tree’s leaves were dropping. The last one I picked was the best, in early Dec. I IDed the variety and decided to start tending to the tree with pruning and porcupine protection, and look at it now, loaded with bushels!

Picked the bulk of the crop this morning, overnight temps down to 20F have done nothing to negatively affect the quality. Birds have been visiting the tree and pecking holes in the fruit, and the first few had begun to drop, so I decided to bring them in. They will need a month or two in storage to mellow for top eating, they are still very tart. What a gift from an old, persistent tree! 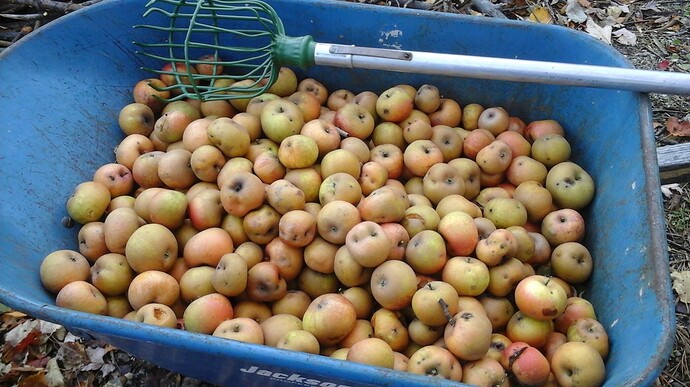 Tested at 14 brix, wonder if that will rise in storage? The most damaged ones will be pressed for cider soon, I will get a better sense of the sugar content from a broader sample and my hydrometer. 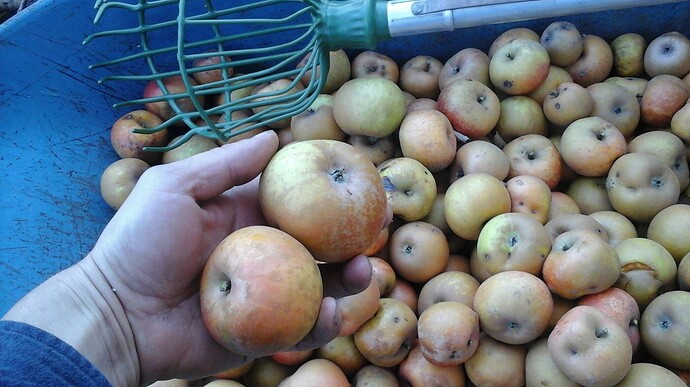 In storage starch will convert to sugars raising brix. Don’t know if that means you should wait to press for juice. But you will be leaving some sugars behind by pressing early.

Nice gift from the fruit gods for sure!!

I pressed a bushel or so of damaged fruit, and measured the SG at 1.067, 16 brix, adjusted for temp of 50 F…tasted good to with quite an acidic bite…I can see why this variety was favored for cider. It will be interesting to compare the numbers, flavor with the other half of the crop after it mellows for a month or three.

If I tried storing those apples I’d have to go through them weekly to remove rotting fruit with all those insect wounds. I assume you pick through them and only store sound fruit.

I don’t find RR to be a great storage apple, By mid-winter it gets pretty mushy here, but conditions are different, of course.

I love this apple. I find it a delight to eat out of hand, makes nice pie, and great cider. I think it doesn’t look quite as nice as a Golden Russet, since RR usually looks a bit more mangy and incompletely russetted over a greenish ground rather than more fully russetted over a more golden ground. But JesseS, your RR look awesome!

I really enjoy how russet skin kind of grabs onto my tongue when I take a bite. RR has some tannin, sugar, some acid, and good flavor. A wonderful all around apple, and an heirloom local to my area.

Plus it is reported to be resistant to fireblight and cedar apple rust. It showed very few spots of CAR in my yard, whereas Wickson and GoldRush had lots. Supposedly it wants to grow up large. Mine is in it’s second leaf on G11/M111 interstem, from Cummins. The espalier design is for five rungs, but I’m hoping to graft over to Spitzenburg for the top level. Here it is as of a couple days ago. 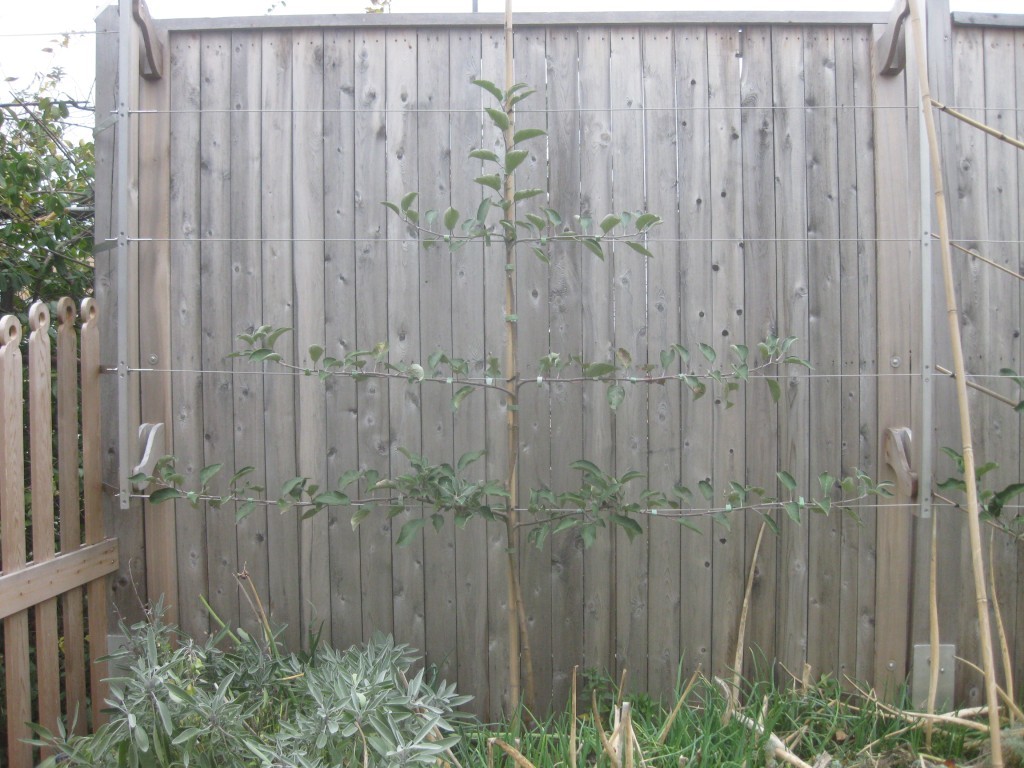 It flowered this spring, and since I was expecting it to want to grow perhaps bigger than the space I’m giving it, I let it keep two apples to maybe slow it down a little. Plus I really wanted to taste my first apple from my micro-orchard! 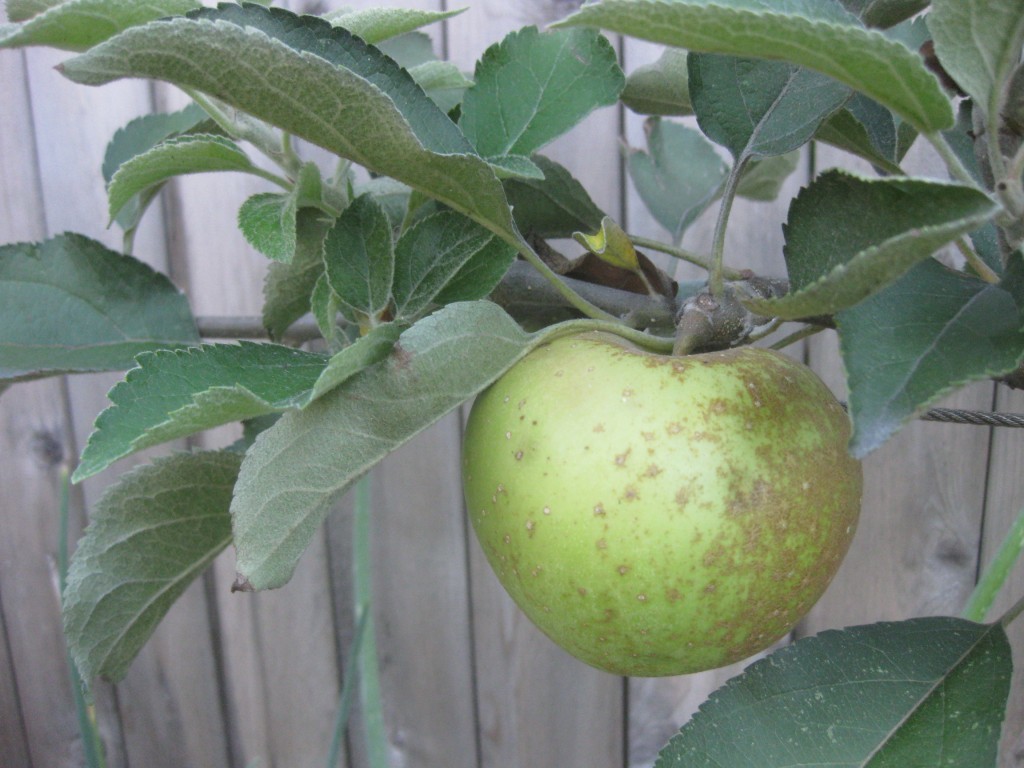 The tree ripened the two apples pretty nicely, but they fell off before they were totally done; the stem was very short and I think the swelling apple pushed itself off the branch. Veg. growth was not as high as other nearby trees of other varieties; not sure how much the two apples had to do with it.

Both the apples were watercored. Maybe from the tree being young? Have to see what happens in future years. My kids had no problem eating them after I told them watercore was a delicacy in Japan. 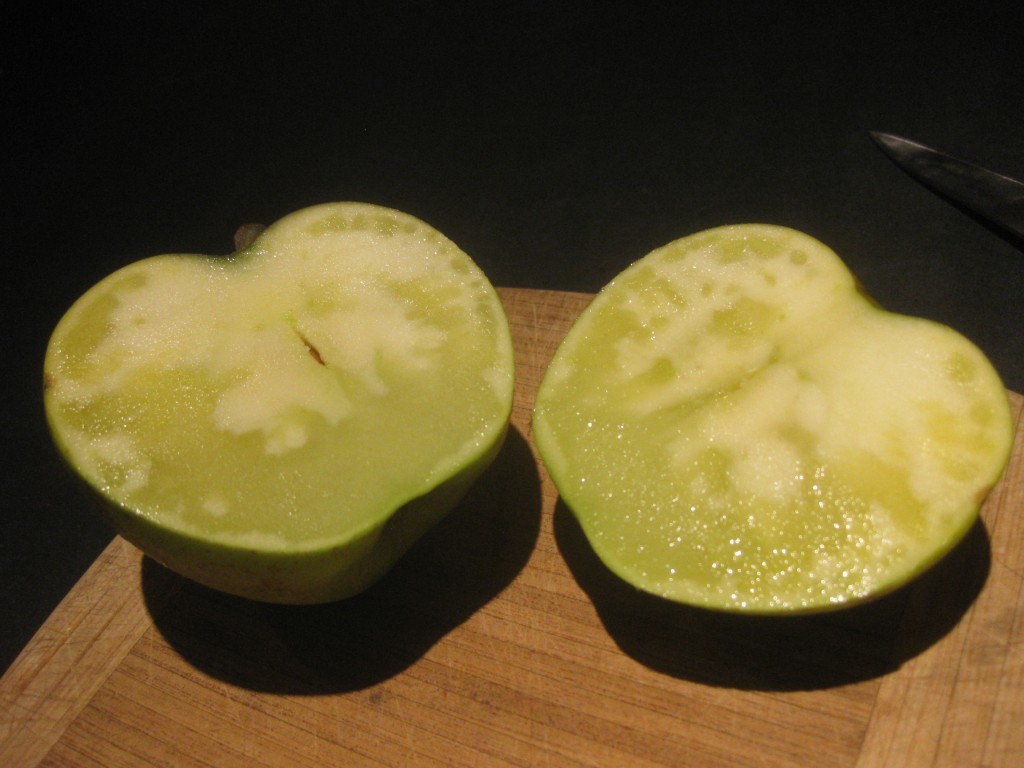 I’m a little unsure about how to manage this tree as an espalier since RR is supposedly partial tip bearing. But it’s other qualities make me want to give it a try. So far the tree is behaving nicely in it’s response to training. Have to wait to see about getting lots of fruit.

Funny you should mention. I budded Esopus Spitzenburg onto a Roxbury Russet/ Geneva.16. To my suprise, the Spitz has grown more vigorous and overcame the original central leader. It is now 8 feet tall. The Rox Russet has been vigorous too-- that branch is about 6 feet tall. The tree is a beautiful “Y” shape-- my best looking dwarf tree.

I don’t know how to describe the appearance of the RR cut open, but I know there is ton of sugar when apples look like that.

A bit of a follow up on the RR crop this season. One of the reasons this apple was valued in its heyday was it’s keeping ability, and I was interested in evaluating this with my harvest this season. 2 months since harvest my cache of this variety has been winnowed down, and I’ve observed the texture change as it has softened and lost its appeal for fresh eating at this point. I found this variety dries well. Still a good cooker with nearly undiminished acidity and flavor, though it does break down to sauce som what quickly now. My last cider pressing of the season was mostly RR, and yielded the most syrupy cider of the season with an SG of 1.070- that’s sweet! In comparison to some other keeper apples, I would give it a second-tier place. Golden Russets are still firm and crisp, Goldrush are rockhard.

I will be going out to prune the old RR tree sometime this next week, will take before and after pics. There’s a bunch of water sprouts that will be removed if anyone is looking for scions…

I agree that Rox is not a good keeper for fresh eating. However, among its attributes that make it an outstanding antique is that it is spurry and bears young and consistently. Like some other spurry varieties it is a weak secondary brancher, but in the northeast it is one of the most consistent producers out of all the antiques I grow and much easier to manage on vigorous rootstocks than Golden Russet (which is hard to train to a nice and productive shape). I’m not a huge fan of either apple off the tree, but customers often like either one of these a great deal.

When I first fruited RR I thought it was the cat’s meow, it was my favorite apple for a few years. Now I still like it a lot, but it is primarily a sweet-tart in flavor. Same goes for GR. The two apples in this sweet-sharp-yellow-flesh school I still grow are Pitmaston Pineapple and Reinette Clochard. I find PP to be a more intense version of RR. Clochard is not the greatest apple in many ways (bugs love it and it doesn’t keep well in spite of being a late apple), but it gets a really rich flavor with hints of lemon and pineapple.

This followup probably belongs on your evolving tastes post Alan…

Here’s a winter view of the Roxbury, hopeful for another crop this fall from this ol’ gal… 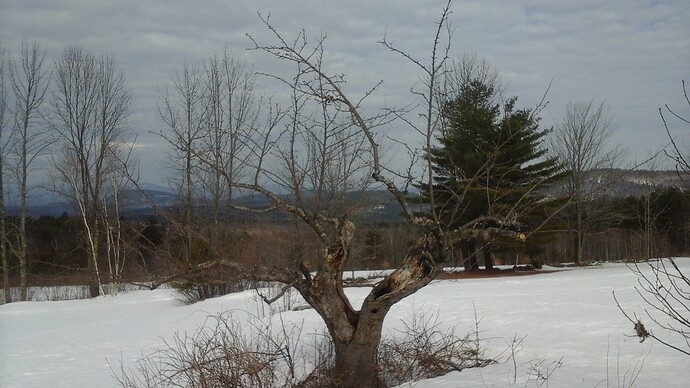 You can see how broken down the trunk is, what it must have been like in its heyday!
I once spotted a porcupine nestled inside the hollow. 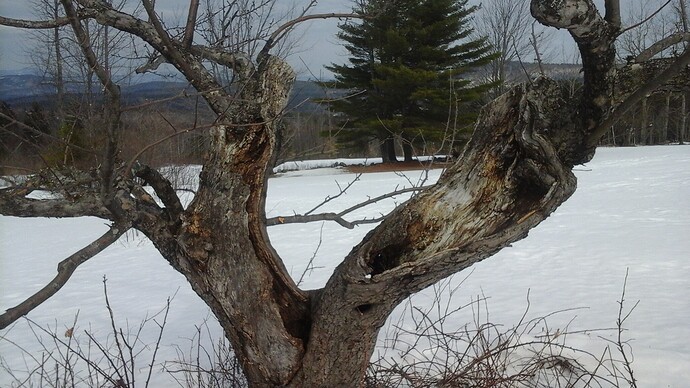 Plenty of scions harvested, I am happy to spread this one around if anyone wants some…

cool photos. I came into this late, like in the last 2 years, and I’m amazed how many wild apple trees I’ve walked right past, hundreds of times, both those from seed and others that must have been old homesteads. now, especially in winter, they stick out like a sore thumb, and there’s something to be said for those gnarled, spurry old apple trees

Jesse,. I hope you have grafted a few scions of this tree to keep the legacy going.