My indoor tomato has been cooking up a couple tomatoes for the last two months and they were finally soft enough to pick. I was really hoping to plant the seeds immediately for my garden but…no seeds. I guess this is what happens when a tomato plant pollinates itself. 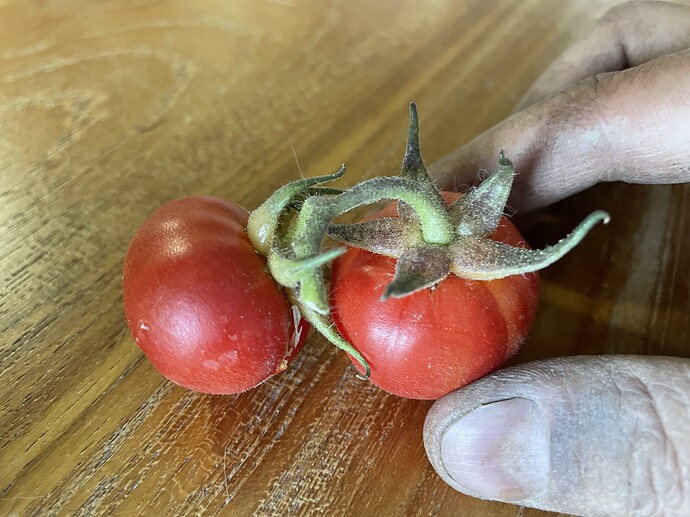 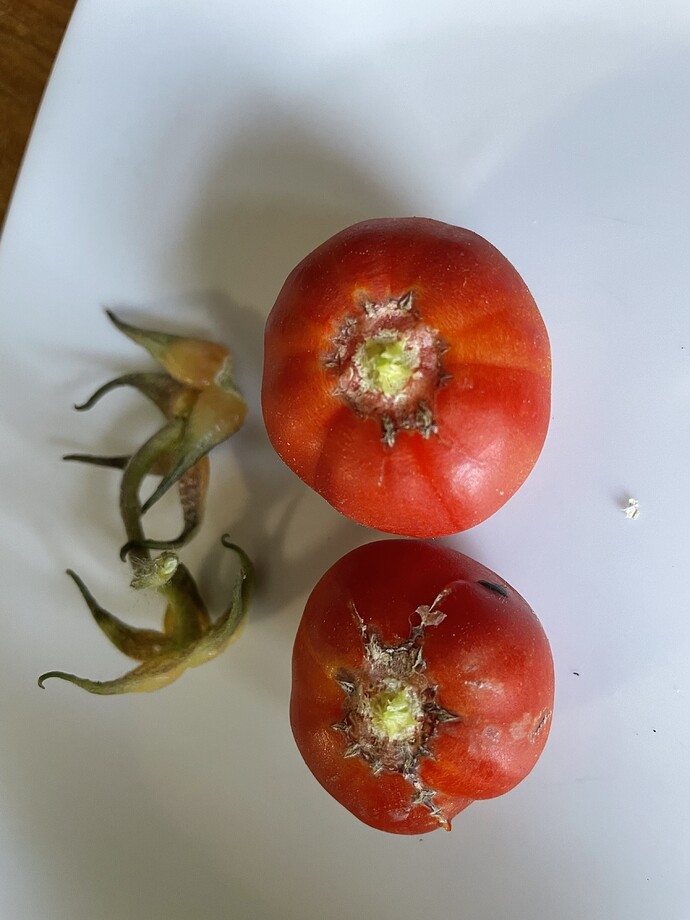 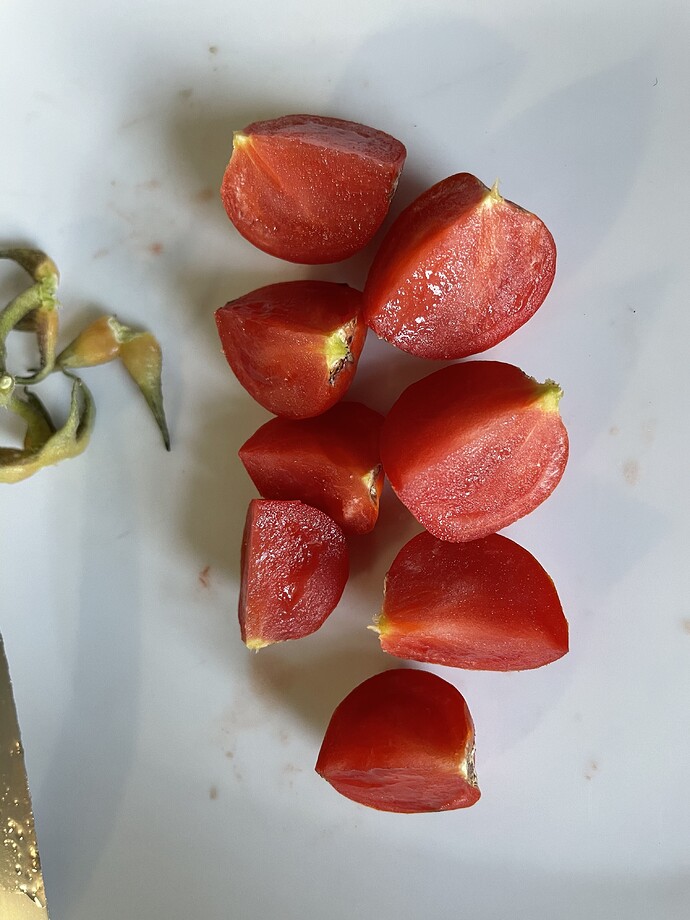 These are the sweetest tomatoes I ever had, which makes sense since all of the plant’s energy over 2 months went into them.

I have kept a single tomato plant in my greenhouse several times to isolate it and harvest seeds. They always provided plenty, but pollinators were able to enter during the warm months. That said, there is a huge industry of growing greenhouse tomatoes these days, and if they could grow them seedless it would be a huge thing, especially if it increased sugar content.

Whatever kept yours seedless may be related to genetics. I advise you to root out cuttings and plant some of them this season- you can do it from cuttings in a greenhouse or just stick a vine still connected to its roots into potting mix. Your tomato may even be worth patenting- I’d pay for a live plant if it turned out to be genetically seedless.

There are half a dozen genes known to cause seedless tomato fruits. It has been a hobbyhorse for several tomato breeders and amateurs over the years. Not worth patenting, definitely genetic. OSU released several varieties over the years that are parthenocarpic meaning they produce fruit without being pollinated and make seedless fruit under the right conditions.

I grow one variety that is seedless under some conditions. It can be frustrating when I want to save seed to find that many of the fruit have no seed at all. This usually happens early in the year when temperatures are cool and pollinators are sparse.

Wild species of tomatoes have a gene “S” that causes self-incompatibility. This gene prevents self fertilization which means any seed produced are from a cross with another tomato plant that does not carry the same S gene. I’ve grown a couple of S. Habrochaites plants that demonstrated this gene. Many of the plants would produce fruit because they also carried one of the parthenocarpic genes. This raises seed saving frustration to the nth level because you have to grow two different plants that carry different S genes and the weather has to cooperate and the pollinators have to do their job. If all the stars align, seed are produced.

Greenhouse tomatoes are often grown without pollinators yet set a crop of seed because they are self-compatible. The varieties grown have enclosed stigmas, meaning the stigma of the flower stays inside the anther cone. A leaf blower is carried through the greenhouse once a day to blow the vines and flowers around which shakes pollen onto the stigma. This is using wind to mimic the work done by pollinating insects. Some greenhouse growers use carpenter bees to pollinate tomatoes. Carpenter bees are extremely efficient because they use “buzz pollination” where they set their thorax against the stigma of the plant and vibrate their wing muscles. This makes pollen shower down onto the bee in the process coating the stigma with pollen. Honeybees do not use buzz pollination so are less efficient when pollinating tomatoes.

I can confirm this plant is capable of producing seeds. It was an extra I had as a backup after the late freeze last year and I just decided to keep it going in my window. It is practically a hydroponic plant since I never gave it any more soil than what was in the cells. It grew out the bottom into the water tray and I just kept topping it off and then algae grew all over it in some kind of symbiotic relationship.

I imagine someone could divide a single plant up several times and grow them isolated from other tomatoes and that would produce a ton of seedless tomatoes. 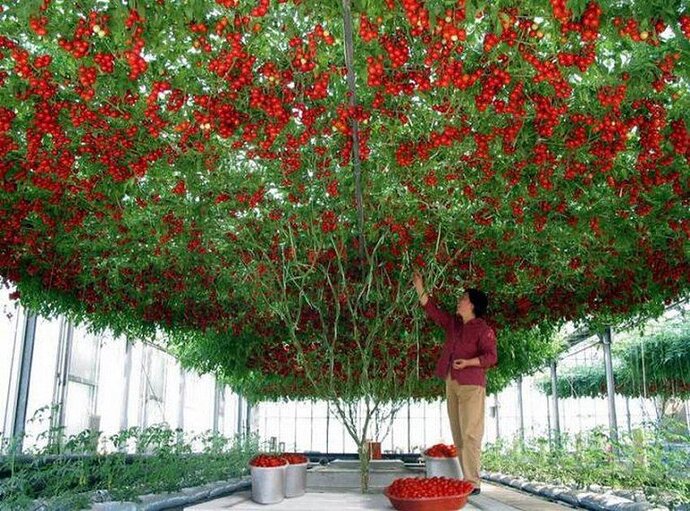 A tomato tree in Epcot’s Land Pavilion has broken a new world record! The tree is located in one of the experimental greenhouses you can see while riding the Living with the Land attraction. According to 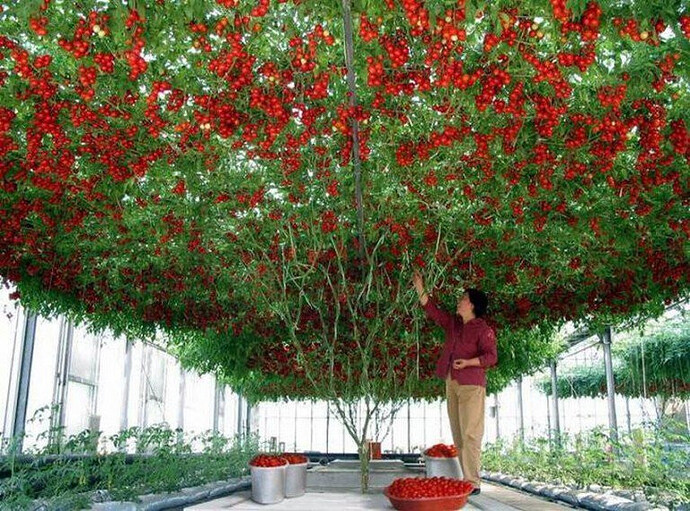