Seeds from grafted trees carrying improved genes, or not?

This is something I’ve searched for and wondered about for a long time. Is it more likely that the seed of a grafted tree will carry the genes from the improved graft or from the rootstock? How do we know? Peer reviewed literature? Anything factual? How about the varieties that generally come true from seed, do they still come true if the seeds are taken from grafts? Thanks

How do we know?

Simple genetics. DNA of rootstock cannot change the genome of the graft at all. Genetic footprint is determined by sex or cloning. A graft is not a GMO. No new DNA was introduced to the graft. It is exactly the same as a self rooted plant.

do they still come true if the seeds are taken from grafts?

Yes absolutely. The rootstock has no say unless it produces flowers and pollen that pollinate the ovum in the flowers of the graft.
Most hybrids are said not to come true because the DNA is not homogeneous in hybrids. In other words multiple alleles for the same loci are available in the genome. Not just one allele like in heirlooms.

Great comment! So my next question is, what do people mean when they say that a grafted speciman can “revert to the rootstock?”

The seed of a grafted tree will carry genes ,1/2 from the grafted variety
1/2 from the pollen source.could be self pollinated , or crossed
NOT from the rootstock .

That would be, when the grafted part dies,
And sprouts from the rootstock grow to " replace " it

That would be, when the grafted part dies,

Yes as most trees are grafted and the top dies, and the rootstock grows and people are confused as to what happened and how it changed.
All questions were valid as sometimes some strange things happen that are hard to explain. Like flowers changing color etc. It does happen. Genetic mutations or sports can form. It is a form of spontaneous mutation.

I have thought about this very question before and also if the genetics of a scion could change if the scion is harvested from a variety grown on a disease resistant rootstock.

Is m7 passing its genes into the grafted variety?
How does the grafted portion express the rootstock’s genes if there is no genetic exchange happening?

If there is some sort of genetic exchange, would the scion harvested now carry the disease resistant gene or has nothing changed in its dna?

One example is M7 rootstock can influence the grafted varieties susceptibility to fire blight.

Is the m7 rootstock awakening a gene already within the grafted variety?

Is m7 passing its genes into the grafted variety?

That would make a new undiscovered way to pass genes, so no, as of date no known transfer method is known.

Is m7 a dwarfing rootstock? I suspect so (I don’t grow apples). If the rootstock changed the scion, trading scion would make no sense. You would need to include rootstock it was ever on. All would be different.

Look at this rootstock-scion union 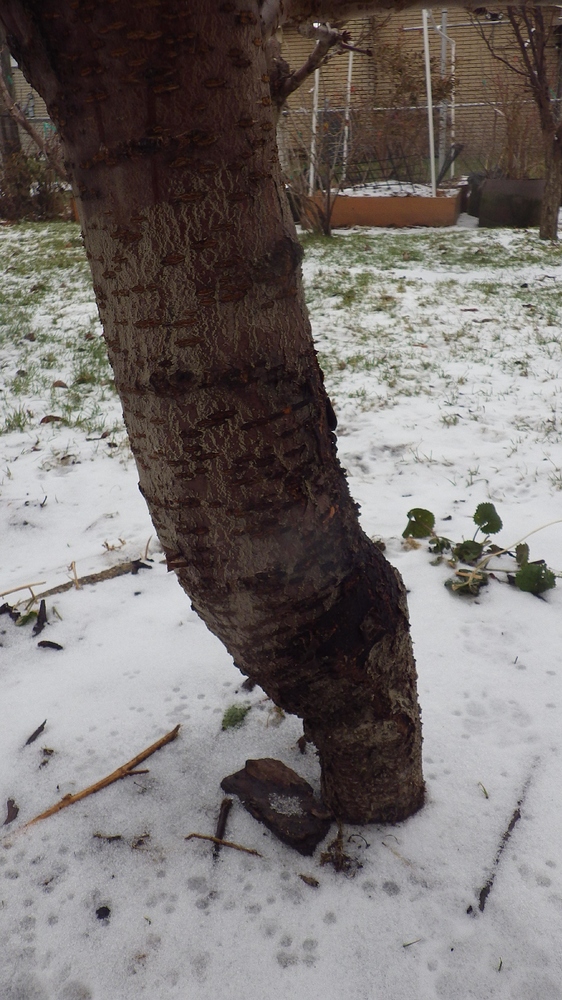 The scion is White Gold sweet cherry and the rootstock is Gisela 6. You can see the scion is trying to grow large. Sweets grow 40 feet tall. This severe dwarfing is accomplished by limiting nutrients and water. What does this cause? it causes a lot of stress on the scion. And studies confirm stress in higher organisms causes a lowering of the immune response. Thus the increase in fire blight on dwarfing rootstocks.
So rootstocks can change the physiology of nutrient flow, but not the genetics.
Part of the reason dwarf trees dwarf is that the rootstock is only partially compatible with the scion. Almost like a transfusion reaction.

Here is the whole tree 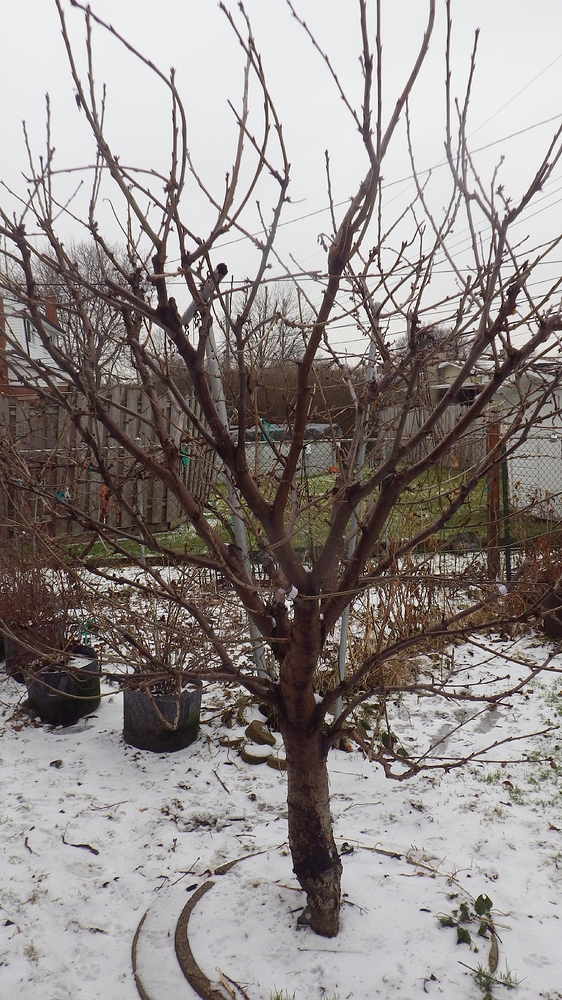 Simple genetics. DNA of rootstock cannot change the genome of the graft at all. Genetic footprint is determined by sex or cloning. A graft is not a GMO. No new DNA was introduced to the graft. It is exactly the same as a self rooted plant.

I don’t believe this is entirely true anymore. At the very least its proven not to be true in tobacco.

EDIT: This is only one study on the subject, so its not entirely conclusive.

Donor and recipient are generally believed to maintain their genetic integrity, in that the grafted tissues are joined but their genetic materials do not mix. […] Our data demonstrate that plant grafting can result in the exchange of genetic information via either large DNA pieces or entire plastid genomes. This observation of novel combinations of genetic material has implications for grafting techniques and also provides a possible path for horizontal gene transfer.

For centuries, farmers have been genetically modifying their plants without even knowing it. Grafting, a common technique used to fuse parts of two plants together, causes the two halves to swap genes with each other.

@dimitri_7a -
I’m not a member of National Geographic. If you are, what published article is their story based on?

I just skimmed the Nat Geo article, but it sounds like it’s swapping chloroplast DNA, rather than nuclear DNA. So the main variety types should stay the same, but the chloroplast DNA movement could have some interesting implications.

Yes, plastids. Thanks for the Science link - it’s a high quality article. From other sources I’m aware that some combinations of fruit/nut rootstock and scions have no improvements while others have resulted in better disease resistance, or fruit production, or even fruit coloration (in one Citrus I’m aware of).

This https://outline.com/ allows you to grab the web address of any article and view it.

Never in a million years did I see this topic going in this direction. I have a lot to learn. Richard I appreciate your links to Phys.org. I’ve got it on the top-line of my browser. I like it.

I have no knowledge of what is referred to in the above articles. So I am ignorant of this.
However , the commonly accepted belief in horticulture being. There is no gene transfer from rootstock to scion .
There can be spontaneous bud mutations, resulting in " bud sports ",that can differ genetically from the original scion variety. This is not thought to come from the rootstock, but just random mutation.
But they did not teach me about horizontal gene transfer in bacteria when I was in school, as it was not generally accepted at the time, …now it is !
So who knows ?
We have a lot to learn yet !

A exception to this may be viruses being transferred from rootstock to scions .

From other sources I’m aware that some combinations of fruit/nut rootstock and scions have no improvements while others have resulted in better disease resistance, or fruit production, or even fruit coloration (in one Citrus I’m aware of).

Yes but I would attribute all of that to improved nutrition via a superior root system. Not to any genetic transfer. Why we graft at times, just like the fig varieties that develop poor roots. Grafting can help a lot. As some one who has actually worked with cells. One study means nothing, can the results be duplicated? It is so easy to mix cell contents, I still am suspect of actual DNA exchange. Have they ruled out contamination? I assume they are doing it right. All the same I would not be surprised if they are mistaken. What mechanism did the transfer? What rejection issues are in play? I could not read either link so as to what they found and how they found it I’m clueless? Doesn’t matter I don’t know enough about it to contribute anyway… I can say 99.9% of grafts are unremarkable. I would expect genetic material from both to mix extracellular, as they have a circulatory system. Yet to combine intracellular material? By what mechanism? How did they determine the transfer and the transfer molecules in play?

@Drew51
I agree that the study does not show any RNA or RRNA transfer occuring – nor do I believe there would be. The paper is from 2009. Perhaps those or some other authors have since fingerprinted offspring of rootstock+scionwood combinations.

There was a related thread on this subject here a few years ago. Create new species of plants by grafting!

Maybe I’m missing something, but after reading the article, it doesn’t sound like that big of a deal to me.

Screenshot_20200113-162603.png1080×2340 276 KB
The DNA transfer was limited to the graft union only. The Scion and rootstock both showed no sign of DNA transfer in the testing, and the disease resistance was not passed past the graft point. It sounds like a graft chimera to me: https://elizapples.com/2019/09/08/behold-the-graft-chimera/
While graft chimeras are cool, they’re not easily created (although easily propagated once created). So while it’s cool, it’s not like there’s evidence of fireblight resistance passing past the graft union from a rootstock to a scion.
Richard 2020-01-13 22:50:20 UTC #20

Well Dan, just the title alone is an oxymoron. Apparently someone is unclear about the definition of species.