This is going to sound like I’m getting dumber instead of more experienced, but I need an answer and I’m not quite too ashamed to ask!

For whatever reason, in the 2 years I’m been learning to graft using my own trees for scion wood, whenever I collect my wood in late winter, I only use the ends of new growth (the immediate past year’s growth). I THINK I can use other pieces but I am not positive so that what I’m asking.

To be clear, lets say I have a branch on a tree, and at the end of that branch it is very clear that there is about 18 inches of “new wood”, meaning it all grew the previous season before the winter that I’m harvesting wood. In the past, I’ve just taken the very last 4-7 inches to use as scion wood (as long as its thick enough). Can I actually harvest the full 18 inches of new wood, and cut it into 3 inch sections and use all 3 for grafting? If so, what do I do to the ends of the 2 pieces that were not end pieces, since their tips will just be an exposed, cut-off end. When I use tips only, I just wrap the graft itself and maybe a couple inches above and below. If I use a piece of of scion that is cut on both ends (ie a “middle” piece, do I need to wrap the whole scion as I’ve seen some people do even with tips?

I hope you can understand what I’m asking! I’m pretty sure the answer is yes, I can use any piece of new growth as scion and that it doesn’t have to be the very end. But I hate to invest all the time and effort that goes into grafting without knowing 100% sure that I can cut scion wood into multiple pieces. Thanks

Can I actually harvest the full 18 inches of new wood, and cut it into 3 inch sections and use all 3 for grafting?

Yes! In fact, I think that’s how most prefer to do it. The more mature wood towards the middle of the stick works well, and gives you all that nice wood to work with.

Use all 3 sections, so long as each section has buds.

Use all the sections. Although you don’t have to wrap the scion with parafilm but I’m a firm believer that doing so improves your take rate. In most cases I wrap the whole scion including the tip.

When cutting scions in winter I always figured longer sticks have fewer cuts to dry out than shorter pieces so I cut as long as will just fit in large ziplock bags.

You might carefully put a dab of grafters wax on the exposed cut upper ends to mitigate drying. Out here in the semi-arid West, that helps me.
BTW, you can even graft 2nd year wood, but it doesn’t grow as well as using one-year-old scion wood. A friend has sentimental ties to a Liberty that became a standard. (Budwood came in contact with the soil and rooted, superseding the semi-dwarf root stock.) All I could find to graft with were twigs with tiny one year growth, so I cut a piece a bit thicker below the growth ridges. The graft took (onto M26) but is only a foot tall in its second leaf.

My success rate increased when I wrapped the whole scion ( including the exposed tip) with parafilm before grafting it onto the tree. The scions I have purchased from a couple of nurseries are often already cut into 2 or 3 sections and they graft just fine.

When it is Winter time and the trees are dormant, I try to clip all the potential graft scions during a week in January or February. I want them to be very dormant, but not have to sit in the fridge for an excessive amount of time prior to grafting. I have a tiny frying pan on the stove that is half-filled with melted candle wax, and as I clip various longer sticks to bag size or scion size, I dip each cut end into the molten wax to seal it. They get bagged after that with fruit variety and date clipped written on the bags. It is very clear that waxed ends stay green/alive/healthy all the way to the wax cap. I have had way too many half dead, unwaxed scions in the past from donors/sharers that would have been a whole lot more alive and ready for grafting if they had been waxed ASAP when cut off the trees. What a waste.

Thank all of you for the great answers and for not making me feel like an idiot for asking.

@NuttingBumpus - I had never heard of using 2ed year wood and had no idea it could work. And even if it is considerably less effective, if I can use it at all it would be quite helpful in some cases, as I’ve had young trees that just didn’t have any new growth big enough to use.

@fruitility - I have heard lots of good things about using wax, so thanks for bringing that up. I’ve seen videos of people dipping the entire scion wood into wax, so your tip is one I’ll probably try- especially since you explained exactly how you do it.

Any wood with a bud can work, but the vigorous shoots cut from the top of the tree work best.

The very tips sometimes contain fruiting buds (rather than vegetative buds), so an inch or two down from the tip of the stem is often the best place to target. This is more true for cherries, rather than apples.

A very inexpensive and easy to use wax, especially for a quick dip of the scion end, is toilet ring wax. It’s always soft so a quick dip and twist…no heating necessary…under two dollars.
I didn’t have much to work with from my rescue tree so I took skinny one-year and right-size one-year and healthy two-year wood and tried them all. I left the two-year wood long-ish and left a one-year twiggy branch on it. There was new growth from both sections. The skinny ones were so-so. They all worked but the best was right-sized one year. To get good sized one-year sticks without too many buds I used the lower parts of scions = the best. 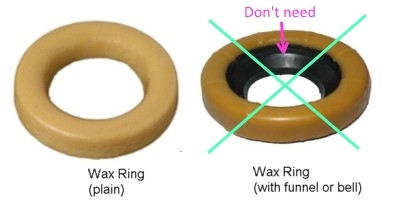 Actually, I think it can matter what parts you use. If there are flower buds on part of the wood but not on other than best to avoid the flower bud section if you want vigorous growth. Even when I remove flowers from new grafts I never seem to get the same growth as with purely vegetative shoots.

Also the vegetative buds may be at different stages of development on a stick of wood, and you want to use the wood with the most developed vegetative buds.

This may not be research based advice, but when common sense is all you have to go by, you might as well go with it.

I cut off the tips of everything until there are no more group clustering of buds. Then I count 3-4 buds below that and make each of those my scion.

The best wood is as Matt states ‘the most vigorous’. I look real hard for water sprouts when collecting scions.

Checking that the pith is chambered (full) is also important. While most all wood will graft ok, it’s the 2 and 3 year old wood that’s chambered well. When grafting nut trees or oaks or other hardwood vs. softwood trees, you want the 2 and 3 year wood.

As you are probably aware, fruit trees are very-very forgiving. Not with nut trees. That pith being fully chambered/developed is the ideal scion - especially when it’s collected from vigorous tip shoots and from the tops of trees or 2+ year old water sprouts.

I’m confused by your use of hardwood and softwood as an explanation. My definition of softwood is a conifer. Some apple wood is harder than some oak wood. I’m also wondering if I couldn’t get more success when grafting persimmons if I used two year wood- I rather doubt it because the only persimmon graft that took for me last year was a scion from a water sprout I stored that was one season wood that I grafted onto a brand new water sprout coming from the ground in mid-spring.

I was trying to be super loose with my terms in that tip shoots are softer.

Me, persimmons don’t forgive so much- that is beyond forgiving me, perhaps, for killing them.

I 100% agree. I discovered toilet ring wax last year and I swear by it.

I found that all parts of the scion work equally well as long as there are no fruit buds but even parts with fruit buds that make flowers can still decent growth of wood. Last year I experimented with using the whole scion to graft with. I took 8 to 12 inch long pieces of pear scion wood and just cleft grafted them straight to the rootstock (pyrus calleryana) that was planted in the ground I grafted 2-6 inches above the soil. Parafilmed the graft and the top of the scion if It needed it. I got growth over 5ft tall on all of them sometimes from 2 or more buds. More scion length = more graft growth / vigor.

I sent a scion of Bardsey last year to someone to bench graft. Being a partial tip bearer, it bloomed on the graft. He pinched off the blooms and it went from there. A few years ago a bench graft sent to me of Hunt Russet had a single set of blooms come off a side bud. That gave me a good idea of the flower color (pink) and when it would bloom (pretty late.) Pinched it off and the young tree is doing fine.
It is best to get strong vertical year old growth to graft and cut the tip, but some things are more eager to live than others, it seems.

He pinched off the blooms and it went from there

Does that mean that the flower bud turned into a vegetative bud and grew like a normal graft?