It’s shaping up to be a pretty good year for me, so I figured I’d share the progress with anyone interested in following along. Here are two drone shots of my orchard to get things started. It’s basically three rows of trees, ten trees to a row, with a fenced in garden area near the barn and a few other denser plantings of seedling trees, dwarf rootstocks, and a pawpaw patch. I’ve mixed in nut trees, mulberries, native persimmons, and full sized apple trees around the perimeter, but those have been slow growers because of the old-growth trees that are already there. There are also two grape arbors and two kiwi arbors. The small blue circles you can see in the second picture are kiddie pools that each have about ten potted figs in them – that should give a sense of scale. 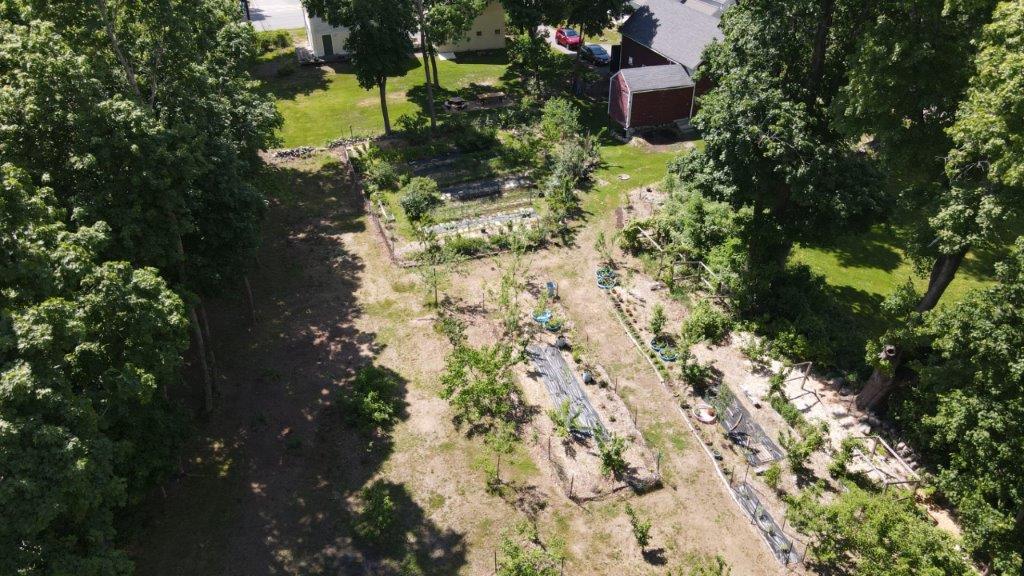 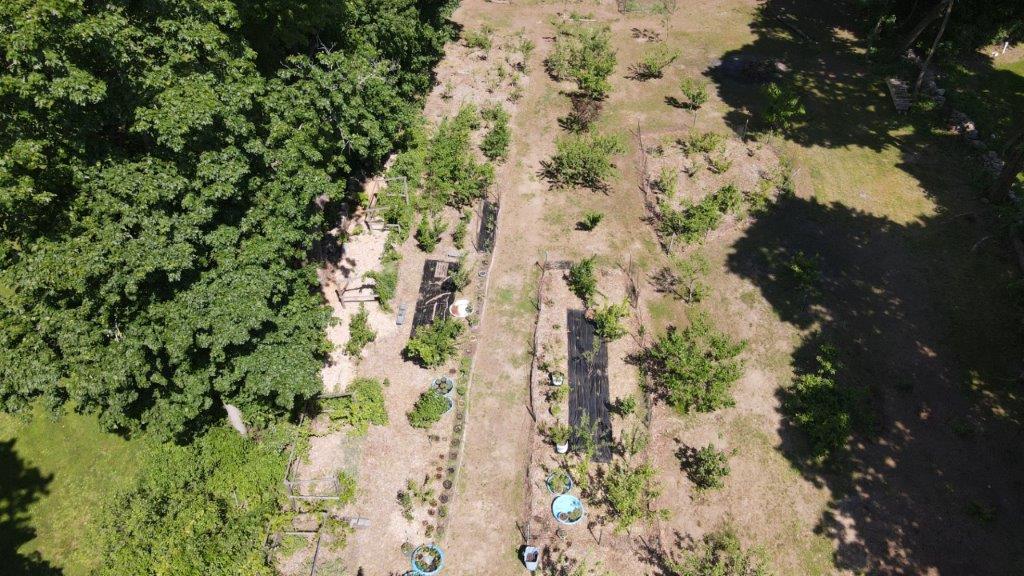 Great shots! I love the oblique imagery. Is this running east-west, north-south, or somewhere in between?

Looks easy to maintain/drag hoses about.

Is this running east-west, north-south, or somewhere in between

From the back of the orchard to the barn is pretty much east to west. So if you look at that first photo, the trees on the left are the south side. They cast a bit of shade on one of the rows in the early spring and late fall, but not really enough to cause any problems.

Looks easy to maintain/drag hoses about.

It mostly is. I have two 500 gallon tanks under the barn that collect water from the roof. Most of the trees are well enough established that they don’t need any watering at this point – I think they’re all at least five years in ground at this point – but we get pretty dry in July and August, so I tend to use a lot of water in the garden and for the 50 or so potted figs I have.

Nice! I have a similar sized swath with similar size trees, but running north-south. I barely get 6 hours of full sun in the best spots. Supposedly, the neighbors on the west side will be removing a lot of trees there, so things should be better in a few years.

You definitely have a nice tidy layout going on.

No weeds? How do you do that? Nice progress. Great job.

No weeds? How do you do that?

It’s tough to see, but some areas were heavily woodchipped over the past few years to help reduce watering and keep weeds down. There’s a guy who does tree work who lives nearby, and he’s been great about dropping off wood chips when he has them. For the other areas, the grass/weeds/dirt was just mowed with the blade pretty low. But with the rain we’re supposed to get this weekend, I’m sure weeds will come back with a vengeance.

Lucky you with the wood chip. Around here, such things have a dollar sign attached to it.

love wood chips in the orchard! i even put some in my potted plants/ raised beds to keep in moisture.

Here’s a shot of a Prok persimmon from ground level. I got the tree from Nolin Nursery in 2014. I keep it at about seven feet and let it spread out. This seems to be a pretty good form for persimmons because of their naturally weeping habit. So it sort of ends up being a vase-like form, but instead of the branches curing up like peaches do, the branches bow towards the ground. It’s loaded with flowers. 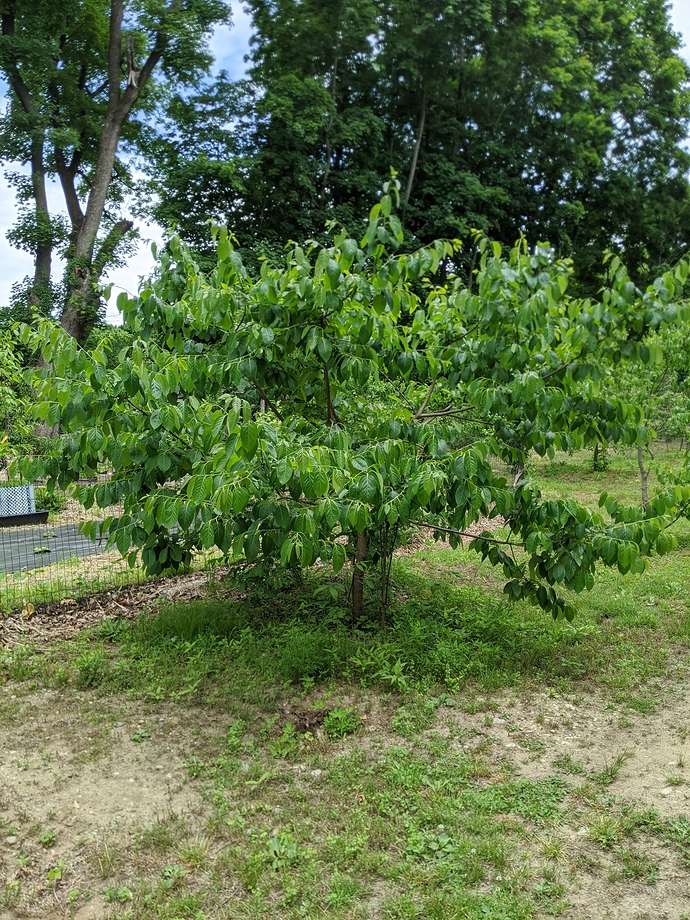 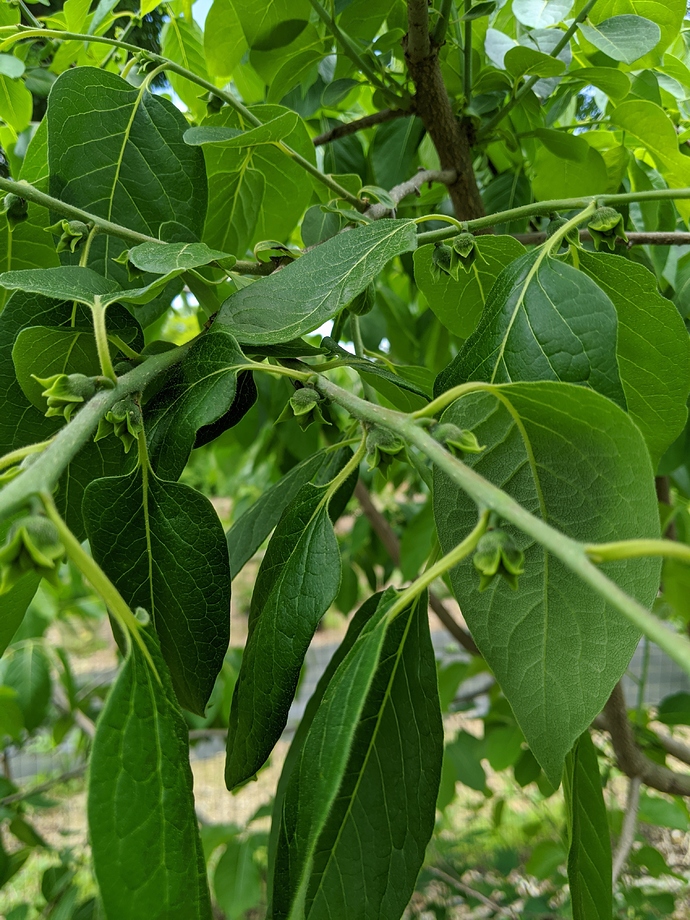 A bird nest under the barn that had four white eggs and one speckled egg. Looks like two different types of birds hatched. 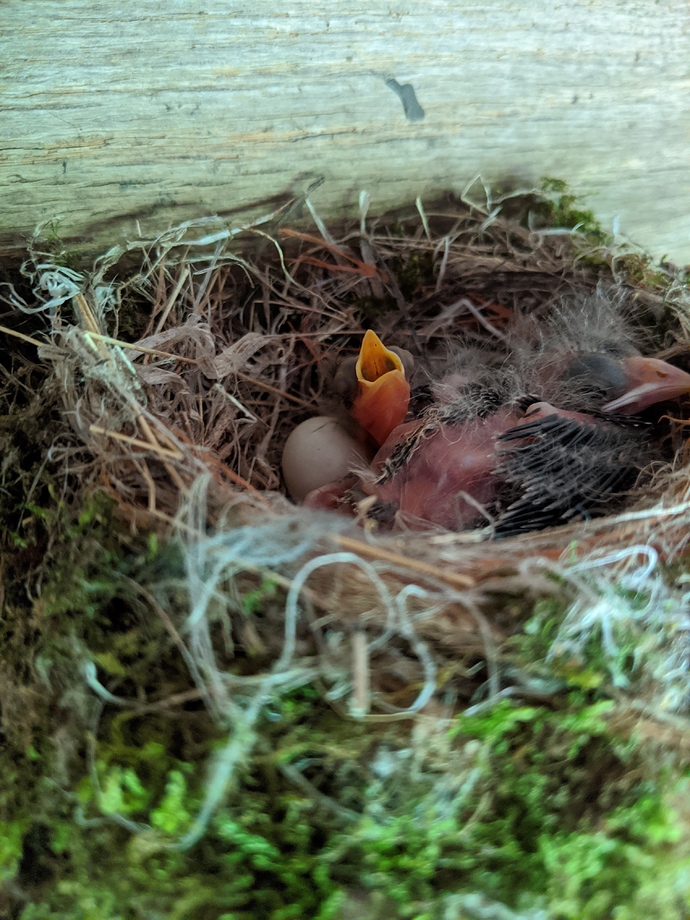 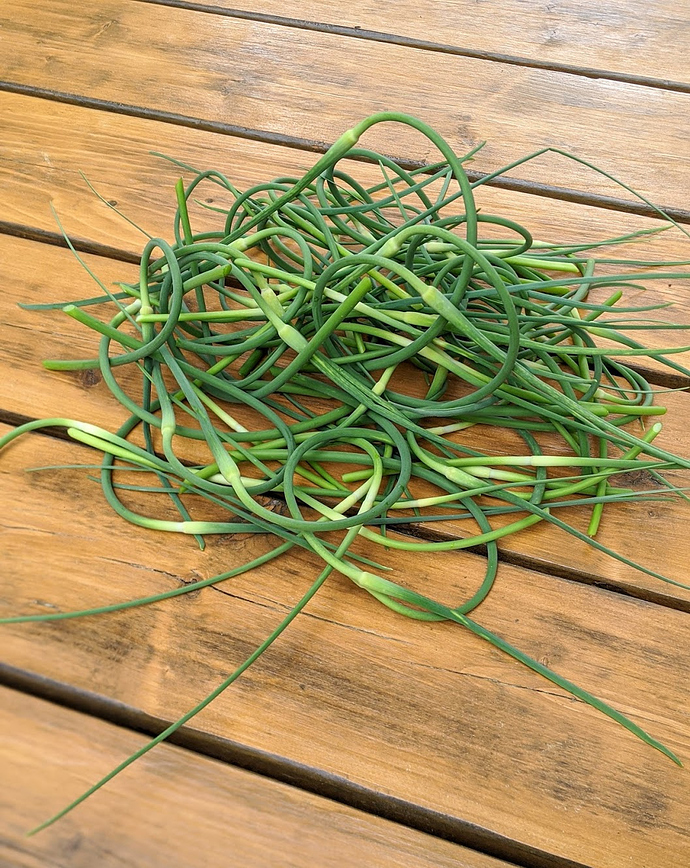 First strawberry harvest of the season. These are a mix of Flavorfest, Scarlet, Sonata, Natural Albino Pineberry, and an unknown from Home Depot. They escaped from their raised beds a few years back and now grow wild together as a patch at the edge of my garden. I built a new raised bed for Flavorfest because of how good it is. And I would have done the same for Gariguette, but the few plants I had died when I fall transplanted them and I haven’t been able to find them again. It was an excellent strawberry. 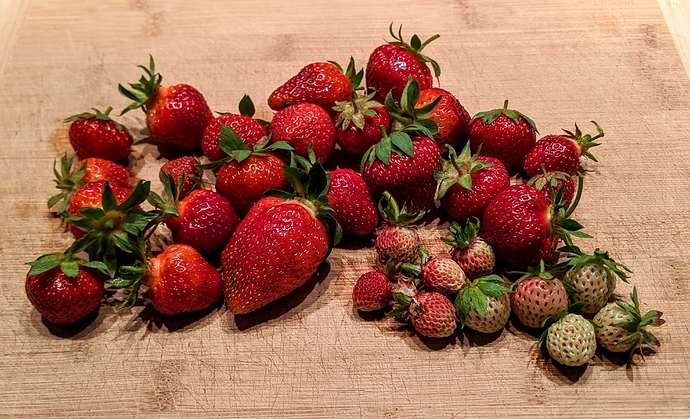 Love the shape of your Prok, easy to harvest.
We just got our first small batch of strawberries, Mara des Bois today, too. I need to order that chipmunk trap. They stole my berries before the ripened.

I need to order that chipmunk trap. They stole my berries before the ripened.

They’re greedy little critters. They’re more likely to leave the carnage of half-eaten strawberries strewn about the garden than they are to spare a few ripe ones for me.

Your Prok is very pedestrian friendly. I planted mine in 2018 and it’s 10 feet tall now. The thing keeps reaching for the sky. My only concern is that the fruit will splatter when they fall if I allow it to get taller. You can message me later in the year about Gariguette. I’ll save some runners.

I ordered a few praying mantis ooths a while back and one is hatching this morning. These are Carolina mantises. I’m hoping they’re good pest control. 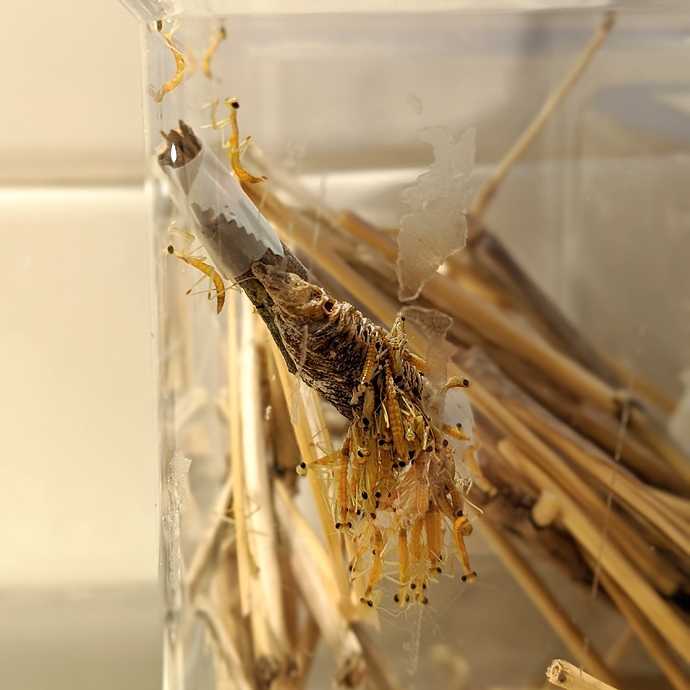 Everything looks great! Do you maintain the height on your Prok just through dormant pruning, or do you summer prune it as well?

The larger hatchling may be a cowbird. Either that or a cuckoo, but it looks more like a cowbird. They’ll parasitize the nests of other birds.

just through dormant pruning, or do you summer prune it as well?

I feel like I’m always pruning all my trees. But the persimmons especially, since their natural inclination seems to be reaching for the sky.

Where do you keep them during hatching process?

The ooth was just in a large plastic jug that originally had grapefruit slices in it. I cut a few holes in the top and added some dried grass and a damp paper towel.
It was kind of interesting doing research on the whole topic though. I learned that mantises are like figs in a way – their own cottage industry. There’s a big group of people that are super into collecting them and will spend large sums of money for the rarer types. Some of them are really cool to look at, like the orchid mantis, but I think I’ll stick to fruit and figs.

I learned that mantises are like figs in a way – their own cottage industry.

My daughters setup a tank for poison dart frogs and wanted to add some isopods to the vivarium as part of the little ecosystem. Suddenly we learned about the hundreds of kinds of isopods people collect and breed. Apparently the roly poly and mantis industries are thriving cottage industries.

Please let us know how your mantises do and if they stick around. I’ve thought about getting a few ooth to try, but was afraid they’d go the way of the ladybugs I once purchased… straight out of my yard.

That’s exactly what my ladybugs and mantises did. Here today gone tomorrow. I find mine in the fall when the leaves are gone i just walk the fields that have the little trees and just take off the whole branch. Binoculars come in handy for this.

How do you keep the mantises around?