Many will remember when i posted this year’s ago " @Derby42 asked the question earlier but it’s likely on a lot of peoples minds related to temperature damage to flower buds. The reason why it’s a good idea to spray copper prior to blossoms opening is it kills bacteria such as fireblight aka Erwinia amylovora but it also kills Pseudomonas syringae aka blossom blast which is the bacteria responsible for forming ice at higher temperatures that can damage flower buds. Here is an article that explains the process the bacteria use Bacterial Ice Nucleation: A Factor in Frost Injury to Plants “Heterogeneous ice nuclei are necessary, and the common epiphytic ice nucleation active (INA) bacteria Pseudomonas syringae van Hall and Erwinia herbicola (Löhnis) Dye are sufficient to incite frost injury to sensitive plants at −5°C. The ice nucleation activity of the bacteria occurs at the same temperatures at which frost injury to sensitive plants occurs in nature. Bacterial ice nucleation on leaves can be detected at about −2°C, whereas the leaves themselves, i.e. without INA bacteria, contain nuclei active only at much lower temperatures. The temperature at which injury to plants occurs is predictable on the basis of the ice nucleation activity of leaf discs, which in turn depends on the number and ice nucleation activity of their resident bacteria. Bacterial isolates which are able to incite injury to corn at −5°C are always active as ice nuclei at −5°C. INA bacteria incited frost injury to all of the species of sensitive plants tested.” Here is another article on blossom blast Bacterial blossom blast of pear - Integrated Pest Management
At first glance sometimes people misidentify blossom blast and think its fireblight."

@Derby42 asked the question earlier but it’s likely on a lot of peoples minds related to temperature damage to flower buds. The reason why it’s a good idea to spray copper prior to blossoms opening is it kills bacteria such as fireblight aka Erwinia amylovora but it also kills Pseudomonas syringae aka blossom blast which is the bacteria responsible for forming ice at higher temperatures that can damage flower buds. Here is an article that explains the process the bacteria use Bacterial Ice Nu…

Blossom Blast of Apple is caused by the ice nucleating strains of bacterium Pseudomonas syringae pv. syringae (Pss). Pss can infect undeveloped apple flower buds, i.e. anywhere from half-inch green to pink bud stage, flowers and leaf clusters and cause their wilting and drooping with paper-dry appearance. Blossom blast can advance into twigs but at a very limited fashion, causing black bark marks. It is primarily know on pear, but can affect apple and can reduce fruit set. Pss bacteria survive and grow on the surface of various plants and are favored by cool and wet weather during the growth stages listed above. Bacteria are disemminated on apple by rain and insects and some strains act as ice-nucleation particles thus leading to frost injury at near frost or frost temperatures. Outbreaks of blossom blast on apple are associated with frosts or near frost events in spring because frost causes injury to green apple tissue allowing this bacterium to enter and infect.

In 2017, we confirmed Pss as the cause of blossom blast on NY-1 buds and flowers. At several locations in the lower Hudson Valley (Milton, Marlboro and possibly at Rexford NY), we examined randomly affected young apple trees with dried buds at half-inch green to pink stage. Among other cultivars such as Buckeye ‘Gala’, the ‘NY-1’ was affected significantly on one farm. The blossom blast signs on ‘NY-1’ expressing mostly at the head- or chest-high areas on the trunk, or rarely at some scaffold branches, are shown in Figures 1A-C below (click on the picture to enlarge). 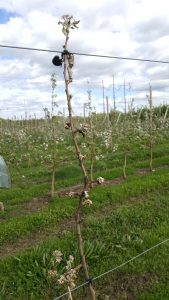 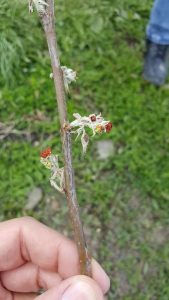 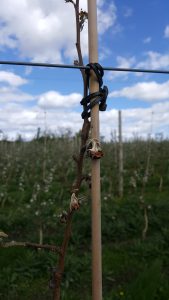 Besides other diagnostic methods, we conducted a confirmatory ice nucleating test in lab with P. syringae pv. syringae isolates recovered from affected apples branches in Marlboro and it was positive. Blossom blast is most common on Prunus spp., with cherries and apricot severely affected. Click here to view a short video that describes this severe incidence on cherries. The affected buds/clusters were primarily on tips of the branches or the trunk. Wood tissue 2-2.5″ below the affected bud, in most cases, was healthy. On pome fruit, blossom blast has been much less reported on pears in Michigan, with potential to affect nearby apples, and very rarely on apple in California. The cause of this problem, specifically known as bacterial canker (blossom blast) on Prunus spp. are bacteria Pseudomonas syringae pv. syringae and Pseudomonas syringae pv. morsprunorum. Bacterial blossom blast of pear is caused by a bacterium Pseudomonas syringae pv. syringae. Pseudomonas syringae is commonly present bacterium on the surface of the plants and in them, causing infection on many plant species. This bacterium can colonize bark and flower buds and occasionally cause bacterial blossom blast on apples. Reports on apple are very rare. Other reports of P. syringae pv. syringae on apple are from South Africa and Australia, with the latter one communicated to us personally on apple cv. ‘Jazz‘. Some strains of P. syringae have ice nucleation activity, i.e. bacterial cells act as ice-nucleating particles, allowing ice to form around them and thus exacerbating the effect of frost or near-frost events in spring. This frost promoting trait of ice nucleation activity implies the significance of frost injury as a predisposing factor for infection (Kennelly et al. 2007).

By looking at the long-range monthly forecast predicting many mild to strong frost events in March and April 2020, we believe that there will be plenty of chance for potential Pss population buildup, infection and blossom blast occurrence on cultivars near or at bloom in these periods (see Figures 2 and 3 below). Even though this weather forecasts are not as reliable as 4-5 day forecasts, and blossom blast is quite rare on apples, folks should keep this disease in mind and employ Pss management options outlined below if frosts are announced in near future. 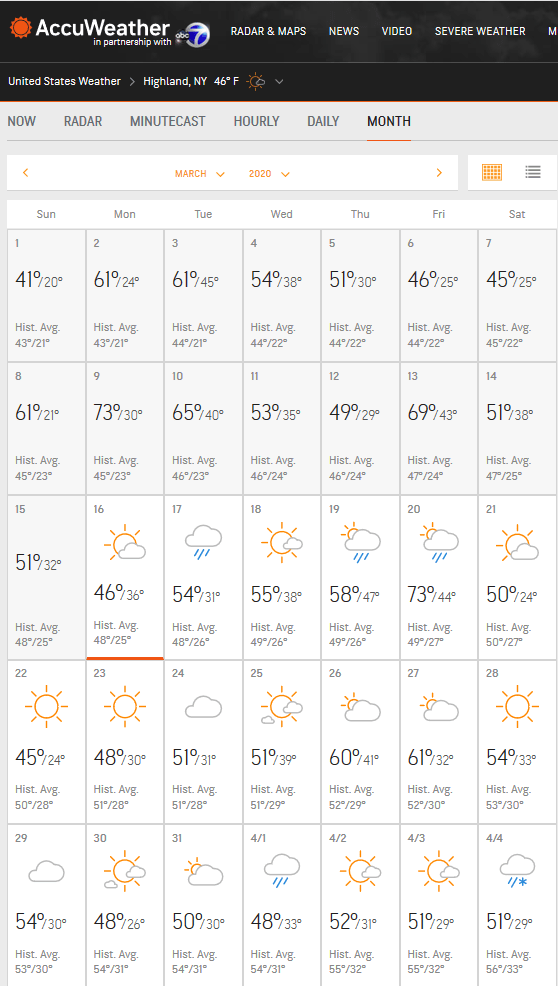 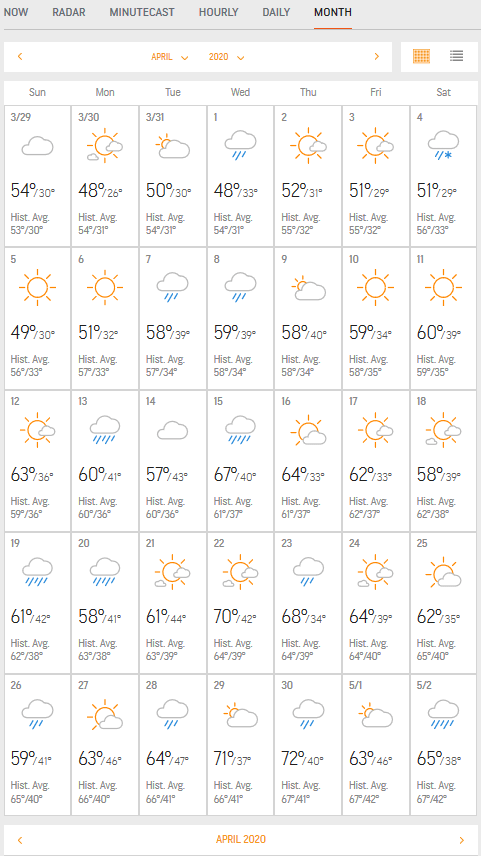 Preventive chemical control of Pss can be achieved by a delayed-dormant copper spray (applied right about these several days ahead), followed by one to two streptomycin sprays applied during bloom, although, these must be applied before frost by anticipating predicted frost events based on weather forecast. Once blossom blast is visible, none of these spray materials will help in disease management, however, further spread of this disease cannot occur due to warmer weather after bloom that does not favor the bacterium.

THIS ENTRY WAS POSTED IN 2020 GROWING SEASON. BOOKMARK THE PERMALINK. "

It’s not just apples and grapes it impacts all fruit

One may have seen wintering rosette leaves totally frozen and wilted in the early morning but recover during the daytime. How can cold hardy plants survive free 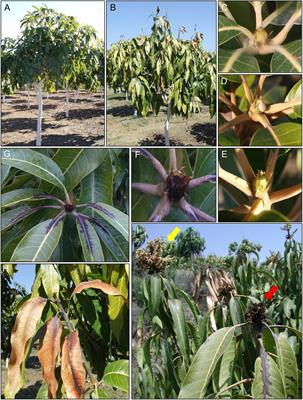 The Pseudomonas syringae complex comprises different genetic groups that include strains from both agricultural and environmental habitats. This complex group has been used for decades as a “hodgepodge,” including many taxonomically related species....

Bringing up this mysterious group of bacteria again because many fruit crops are lost every spring from this bacteria. You might remember threads like this

I’ve read a deficiency in boron can manifest itself in many ways. Blossom blast and other problems are said to be worse under those conditions. Anyone have experience with blossom blast or boron deficiencies? Those buds that do not have leaves I think are infected with blossom blast. This is the first time I’ve saw the disease outside of books. It greatly reduces fruit set I’m told. I used both copper and antibiotic this spring. This is an Asian pear that I grafted new wood to this spring. S…

@applebacon did you spray with copper recently? If you did it may buy you some cold hardiness. If you killed the bacteria that help form ice its likely you are ok (see blossom blast) Here is a critical temps brochure for blossoms so you know the temparature losses occur CriticalTemperaturesFruitTrees.pdf (2.4 MB)

Delivered boron via spray in my case they get it faster and it takes less. Pears had blossom blast and i needed fast boron to stop it from progressing. Completely wiped it out but not instantly as they say it just progresses no further. It takes awhile to see full recovery but i felt i was right within 2 hours of spraying. https://agriculture.borax.com/blog/july-2017/need-a-quick-acting-boron-supplement-spray-it!

Hope this thread is helping some people out.