No harvest yet, but I decided to open this topic in case I will be in the mood later on to post some photos and reports.

Some notes on bloom this year. It’s common here in California for some varieties to bloom very early while some others bloom weeks or even months later. This year was even more extreme in this aspect than usual. “Early” varieties bloomed pretty much at their normal times (starting around mid-February), while “late” varieties bloomed 10-14 days later than usual. I’ve already finished thinning early blooming apricots (Nicole, Tomcot, Blenheim, Moniqui, etc.) while some apricot varieties just now are starting to open their flowers. Similar story with plums. Asian plums and pluots bloomed with early apricots (and are all done blooming by now), while Euro plums started flowering one-two weeks later than usual.

Based on the amount of thinning I had to do so far, this will be a good crop year for apricots, at least for those that bloomed early. Still have to see what will be the crop situation with late bloomers but based on good weather and pollinating insects activity, no reason to think they should be too bad. I have not yet thinned Asian plums and pluots since they tend to self-thin to a degree, but from what I see most mature trees and grafts also set very well. Most Euro plums are blooming profusely in a very nice weather so hopefully they will have a good crop too. 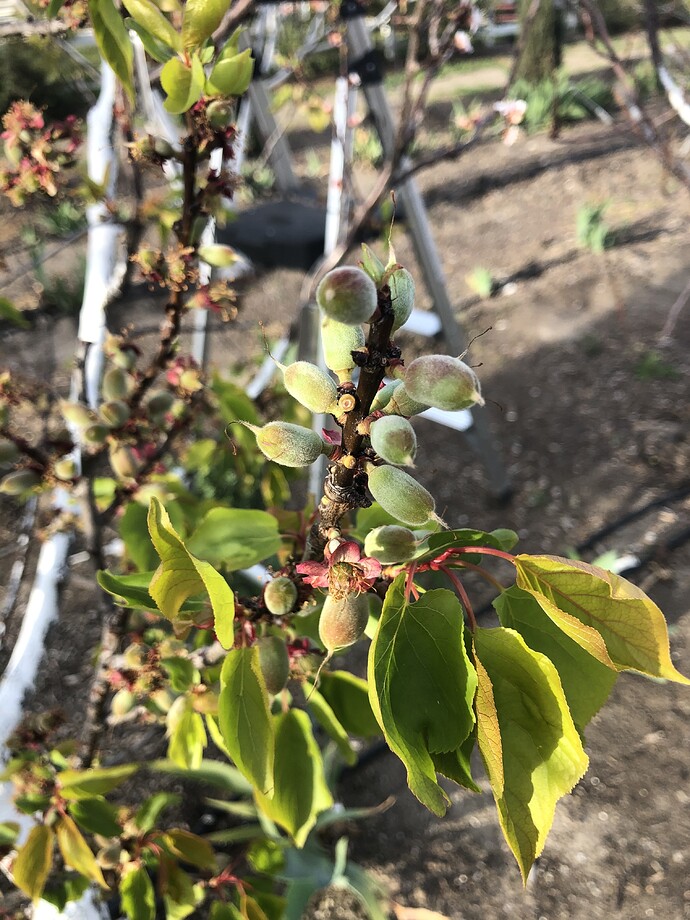 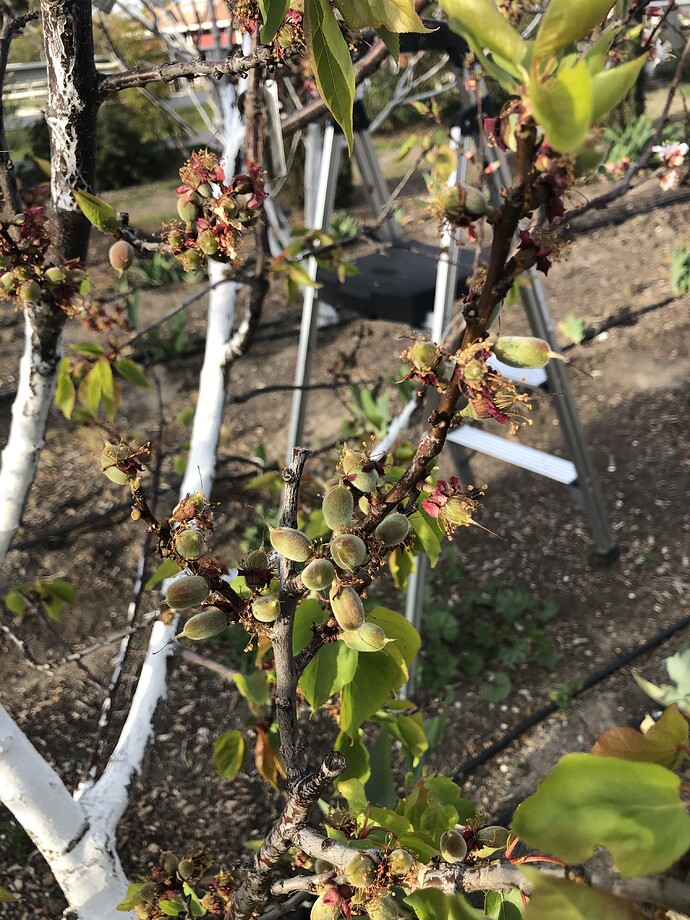 A Euro plum tree (about 90% is Imperial Epineuse plus a bunch of other varieties), March 24: 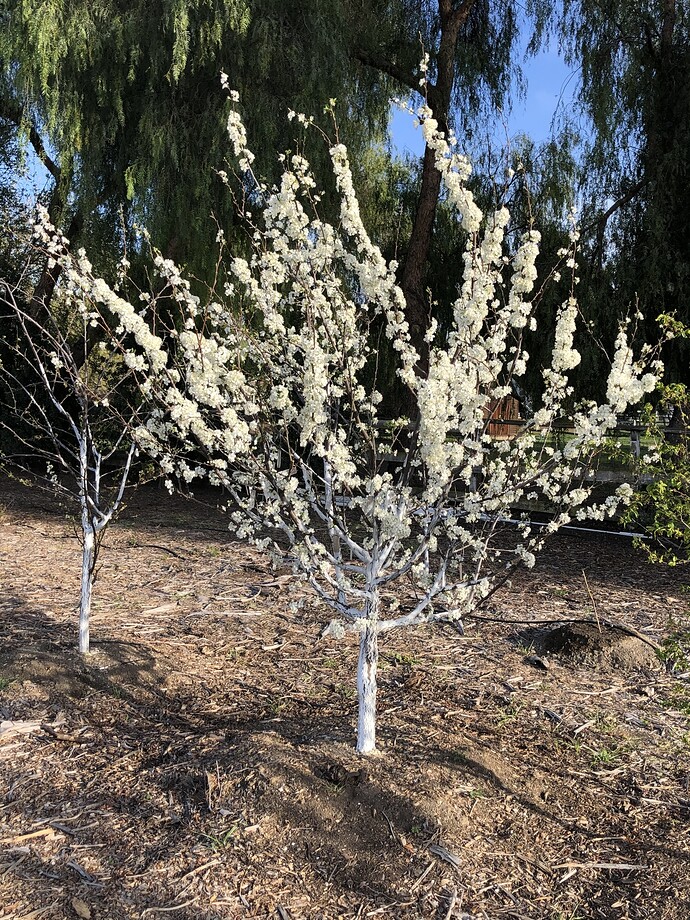 This is the year to party-crash Stan

What is it about the weather that might have caused some stone fruit species to be late this year and others not? In our area (inland So Cal) we have had more compressed temperatures. The lows are not as low and the highs are not as high. This has generally caused later bloom, but better (more compressed, more full) bloom, in my marginal chill varieties.

And are the late varieties also dependent on other factors (maybe intensity of light, warmth, perhaps chill)?

I am on it

I don’t have a good explanation except that March was relatively cool.

I notice that behavior in years with not enough or significantly less chill.

Ben, you grow in tunisia, right? What are your experiences like there?

Just 6 ft behind you…

Yeah, this year has been the worst with the lack of chill. There are local almond varieties with requirement in the <10h range (10h according to research articles) but this year has been like no other. There was barely any cold nights, flowering while still holding on to last season leaves is common but I did see most trees getting confused and most flowers strangely couldn’t set fruits. The few ones that did, are of gigantic sizes because of the lack of competition.

I have one peach that is surprisingly still dormant, I guess it’s still waiting for more cold that will never happen. Low chill plums are also suffering. Mulberries and figs in the other hand are enjoying it. But when I ask around, all the regions from north to south are claiming that all the fruits are delayed, except Loquats which ripened few weeks ahead.

This year I decided to use unripe Asian plums and pluots to make Japanese plum wine (Umeshu). I thinned my peaches and apricots very early but did not thin the plums until they matured a bit (early May here). Then I used all these thinned plums to start the wine (it’s called a “wine” but it’s really a liquor made by infusing unripe plums mixed with rock sugar with alcohol). About a year from now we will learn how good is the result. 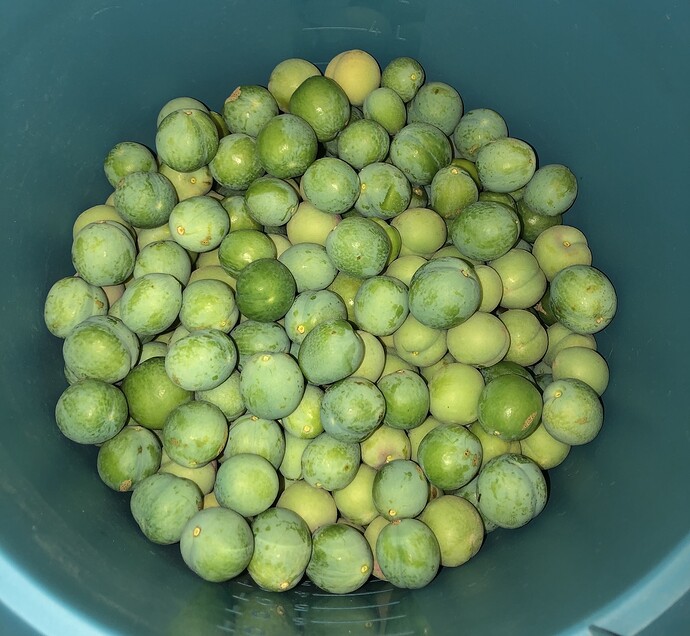 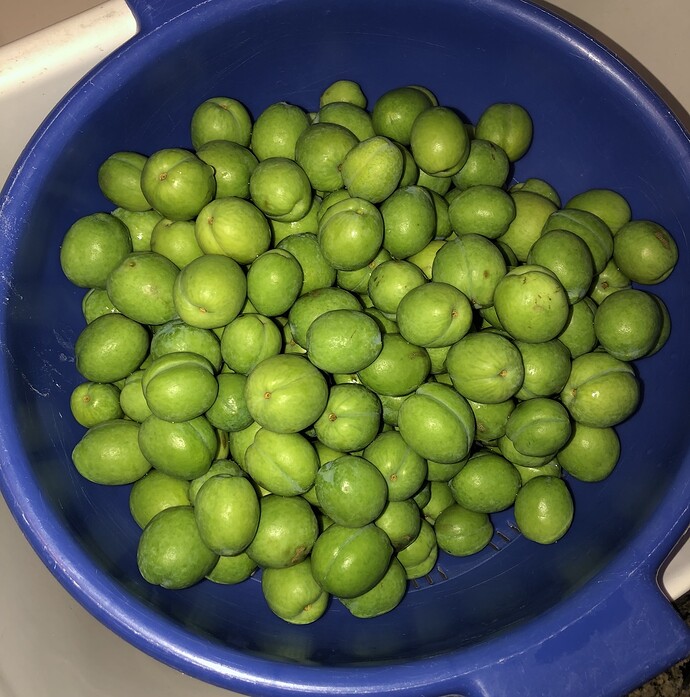 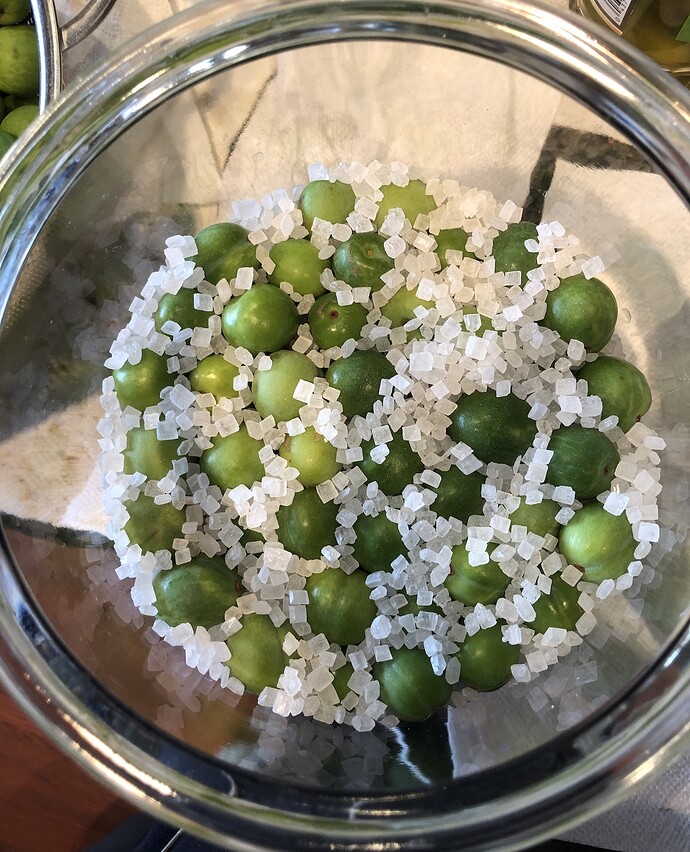 Ripe apricots are just a few days away. Hopefully, birds and critters will leave me some. 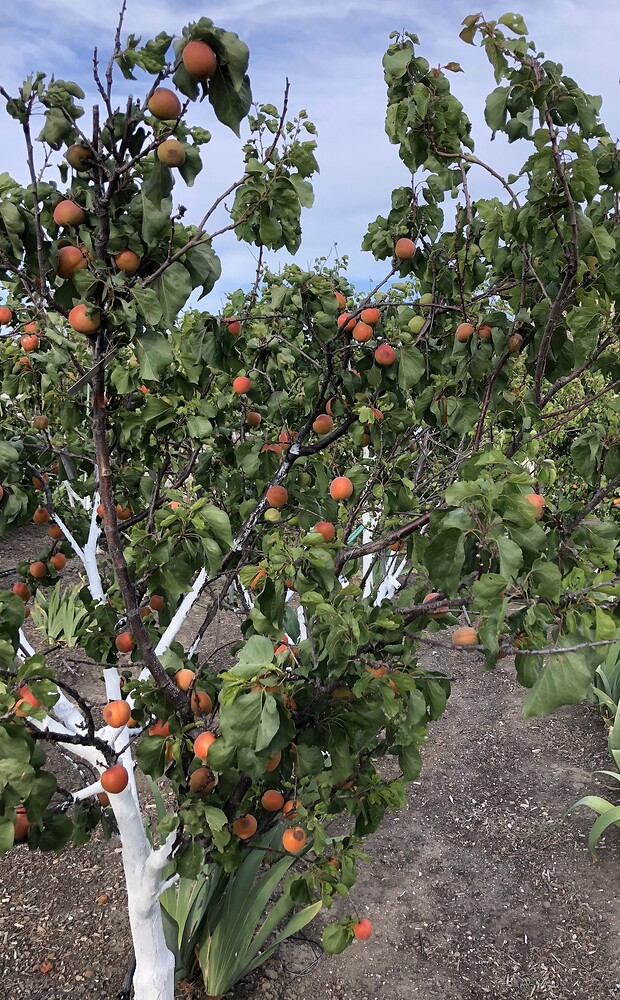 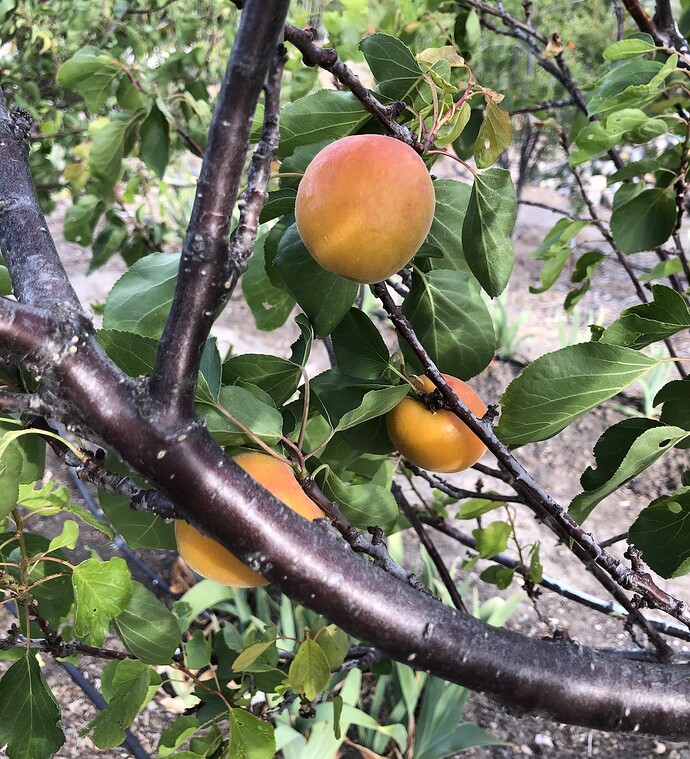 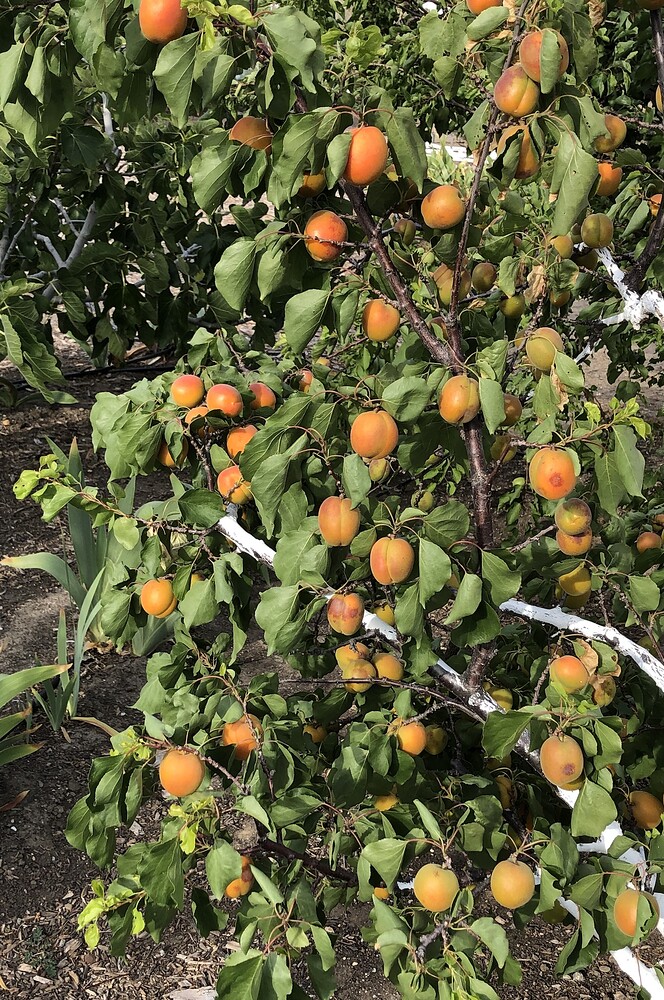 Have been eating first Nicole apricots yesterday and today. We’re having strong winds and some fruits fell down a bit underripe but most are already very good. 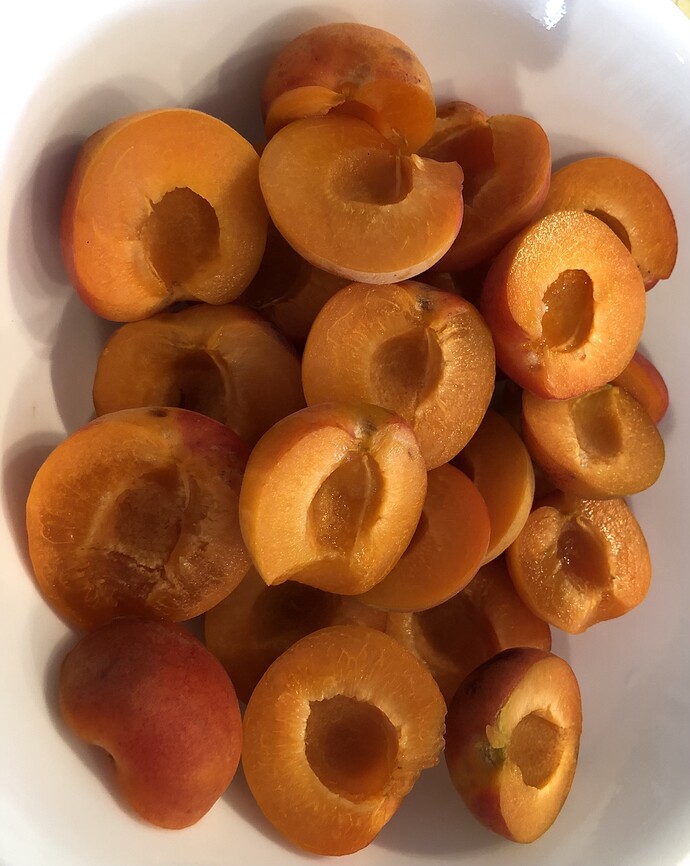 Thanks for the report Stan! 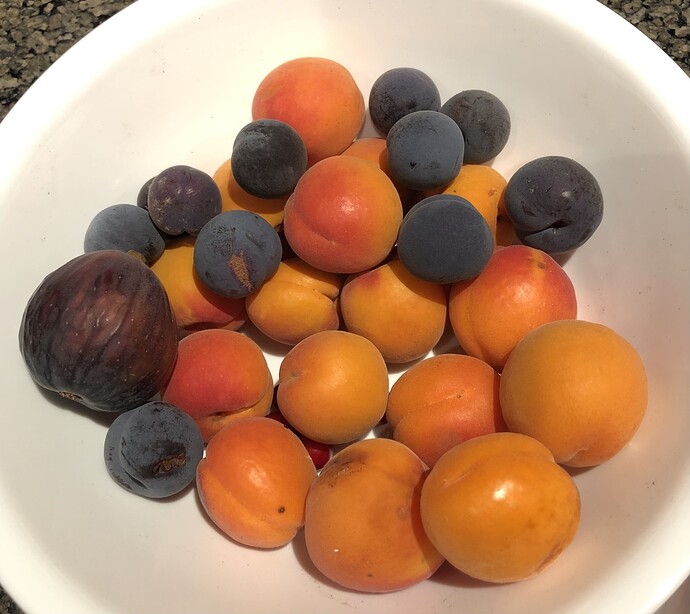 Mine has not had chance to bear fruits for two year due to rabbit damage. But the ones I bought in the store were in a big Mirabelle size

Are Spring Satin plumcots typically that small or I have not thinned enough?

The ones I buy from an orchard and the few I got from my tree were the size of medium sized apricots. How do you like them? They should be picked soft for good sweetness.

I guess I should have thinned them much earlier. Yes, when the fruit is picked soft the flavor is very good.

I find Tomcot a bit too acidic for fresh eating. It will make some very good jam. 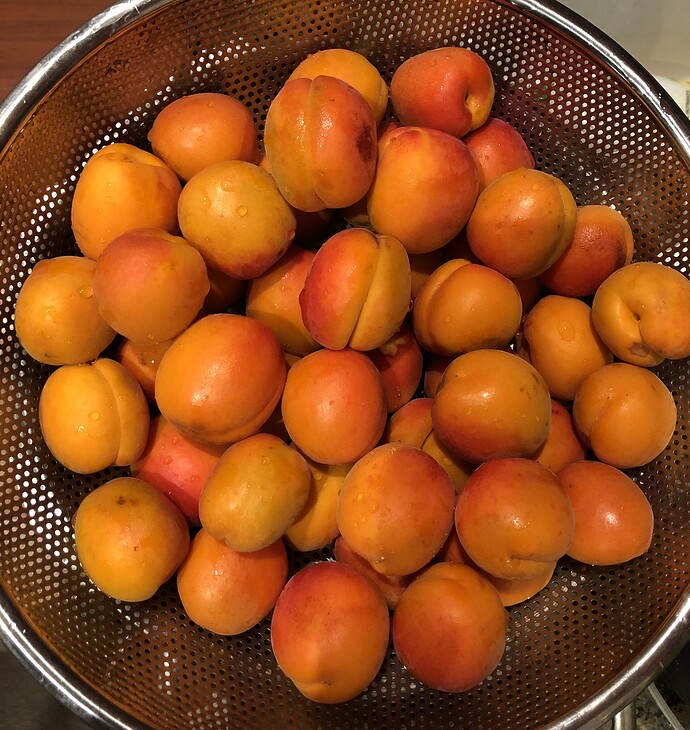