I’ve had a Stanley Plum wasting space in my backyard for nearly six years now, and I’ve yet to sample a single fruit. I’ve never seen more than five or six flowers on it in the springtime, and only once did I detect a weak little greenish plum that was about the size of a green grape before it fell off.

This is in stark contrast to the multiple apple, peach, cherry, pear, serviceberry, mulberry and pawpaw trees that all do just fine, in addition to gooseberries and red currants.

I’ve never really seen a fruit tree act like this. It gets care comparable to the other trees yet simply doesn’t care to flower. I’m about ready to cut it down but I thought maybe somebody might be able to tell me what’s wrong and what I need to do to correct the problem.

My Italian prune plums are just like that, except that they’re a couple of years older than yours and have started giving nice crops. May be that they’ll come into bearing sooner if they’re not fed too richly (easy on the nitrogen) and if they’re not pruned very much. I’m thinking that way but haven’t got it all figured out. I hope you give them another year or two before you decide.

You can try root pruning around the drip line. Sometimes a little disturbance around the root system will scare a fruit tree into producing fruit.

I wonder if your low humidity cold winters is freeze drying the dormant bloom buds. Another issue may be too rich of soil. Some areas of the Midwest have fabulous soil and the tree is too vigorous. Once again, root pruning may help that.
I would do the root pruning in late summer when the tree should be setting fruit buds in getting ready for dormancy.

Had a friend once say the same and then at about 9 years old it buried him in plums every year! European plums like green gage are slow and even at that mine does what it wants. Japanese plums don’t have the flavor of the gage type plums and never will. My advice is be patient and you will be rewarded!

I’ve been giving it a good talking to - produce or you’re outta here - but it hasn’t been listening.

Somebody else suggested shocking the roots like that and I was thinking I might try it, but if I have to deal with a bunch of root suckers, I might rethink that strategy.

It does of course depend on the propensity of the specific rootstock for suckering – so don’t completely abandon the idea. It’s just my word of caution.

You know the bench bending trick but another trick you can use is to take a knife and cut all the way around a branch to girdle it and that will force it to produce. Just try one branch and I should mention I don’t like to do that with stone fruit though it’s effective. See this link Want early fruit? Do the girdle & this one How do you make those stubborn varieties produce fruit?. I see some links have expired but the ideal is cut partial slits with this type of knife which can be found at Walmart or amazon etc. in different sizes https://www.walmart.com/ip/Zenport-GK01-1-8-Girdling-Knife-3-18mm/26586965 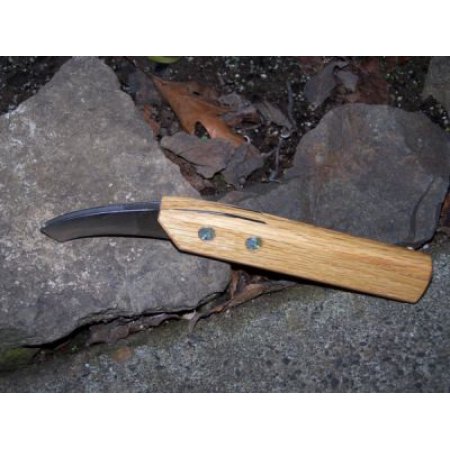 I have commented on the slow maturation of E. plums for so often it is frustrating I’ve not penetrated the general understanding of members of this forum of what I consider the best tactic to speed maturity. Pull branches below horizontal in early spring and they will form fruit buds that season and fruit the next- especially in a tree over 4 years old. Most E. plums have a very upright growth habit that slows maturity- tell the tree what to do and festoon the branches- no need to injure the bark, although I’m sure that works as well- usually does for apples.

Castleton and Empress are two prune-plum varieties with excellent fruit and reliable productivity that have a good spreading growth habit and produce fruit relatively young without festooning. The first is mid-season and small fruited the second is late with big fruit. If anyone knows of others with similar precocity, this is a good time to post your experience.

My questions are 1) how certain are you that this is a Stanley plum? Where did you buy it from?

You described that it set fruit, grew a bit, turned yellow and dropped off sounds like a pollination issue.

I try to avoid causing unnecessary open wound on peaches or plum. Too many diseases waiting to happen through open wounds. I am not worry if it is a apple or pear.

I have trained my trees open center, vase shape, whatever it is called for several reasons, early fruit production, shorter trees,easier to spray and harvest, etc. I don’t mind having less yield on small trees.

It is not easy because most trees like to grow straight up, plums, peaches, pears. Sometimes I feel like I am losing the battle.

My Mirabelle Parfume de Septembre, planted in the spring of 2014. Flowered and fruit profusely 3 years later in 2017.

All my three E plums, Parfume, Castleton and Coe’s Golen Drop are trained the same way, planted the same time produced the same year. All are on Marianna 2624 from Raintree Nursery. 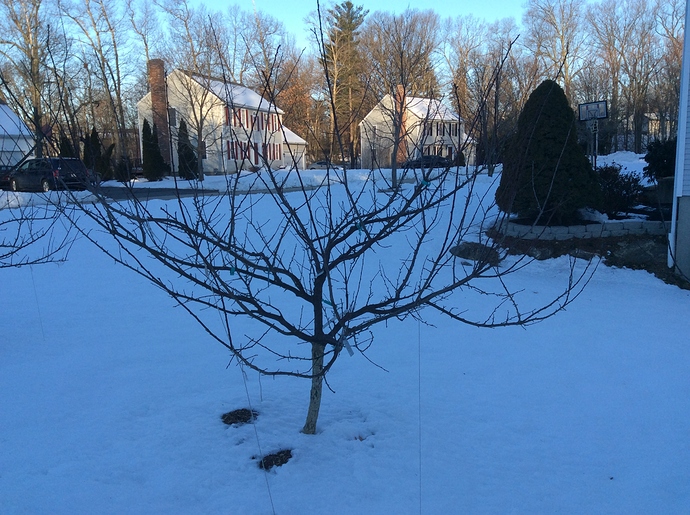 Picture was taken this morning.

Beautiful tree. That size is my goal for my cherry and peach/plum trees.

I have trained my trees open center,

I usually start plum trees as central leader and eventually cut out the centers long after they begin to bear fruit- with peaches I cut out the center as soon as I have well developed scaffolds, but the center gives me the ability to use branch spreaders as I develop my permanent branches. I use Treform spreaders until a tree sometimes need to be spread from too far out to use a normal sized spreader- then I use string either tied to a rock laying on the ground or tied to the base of the tree. Peaches can be dicey to leave a central trunk above scaffolds- you have to summer prune to avoid excessive shade close to the trunk on your permanent scaffolds or some varieties stop producing productive wood there.

Your tree looks beautiful, Tippy, but I prefer fewer scaffolds eventually. Extra scaffolds can be helpful though to tape uprights from scaffolds to a horizontal position to accelerate the development of secondary branches. A temporary low tier also can be used to help tie down higher branches.

I suppose I can’t say I know for a certainty what it is, I can only go by the long lost tag that was on it when I purchased the tree several years ago. If it ever fruited then maybe I could be more certain.

By “a bit” I’ve seen ONE tiny grape-sized plum that disappeared after a couple of weeks, but this is no suprrise since I’ve never seen any more than four or five flowers a season.

It does, however, grow quite upright, long, somewhat spindly branches at that. I’ve pruned back the center but that’s about it.

I’m getting some good suggestions so far - I’ll keep working with it but it’s frustrating when everything else produces nice crops with minimal fuss. The two peach trees that I planted the same year I planted this tree have been giving me abundant crops almost from the outset - as long as I keep the squirrels away from them.

Have you done any grafting? Grafting plum is easy. I looked up pollination partners for Stanley. It looks like gage-type plums are what you need.

You can ask for scionwood from those having gage-type plums. Graft a couple on your tree, the issue is resolved. Grafted varieties often flower inyear two.

No need to get rid of your tree.

Thanks, Alan and @Susu. I also use a lot string and rocks. It is a constant battle as every branch wants to go up, not out.

Thought I would let everybody whose commented on this thread know that, for whatever reason, the tree exploded with flowers this spring and is now virtually covered with small fruits. This after doing nothing to it outside of giving it a good talking to. I’m anxious to see how much it produces and I’m hoping the plums are reasonably flavorful.