Strange weather will it get our blooms & fruit 2018?

We didn’t have a spring at my location for 2018. Winter turned to summer and the time we normally use to graft and plant did not exist. Any other locations have similar weather? Right now my location is in a serious drought. We have had 4 feet of drop in the water table and many ponds that were 4 feet deep are dried up. Nearby locations have had more rainfall but they are still dry. My strange weather will it get our blooms and fruit thread was nearly 2 years old and getting hard to follow! Today it’s 90 degrees. To add insult to injury I lost the majority of my pear blooms to weird weather! Luckily I had some late bloomers!

5 Likes
The problem with clay soils - rain or drought
Life in Kansas! (Late Freeze)
Dec. 01, 65 F, in Montana?
Water pump for irrigation among other things
Strange weather will it get our blooms and fruit 2020?
Fruit Trees for locations that might warm up before last frost
Pyro 2-33 Joint Order
Derby42 May 12, 2018, 9:30pm #2

We are close so it is no wonder that our weather is similar. I just posted in another thread that I finished grafting today. It has been a challenging season to say the least. I think I grafted pears over a four week period. Cold, more cold , then summer. Oh well you try and control as many variables as possible and the weather is not one of them. Luckily pears are so forgiving and I was blessed with many takes. I looked at ts hardy this am and it is really starting to grow. Clark’s little yellow is doing good also. I have it on a little ohxf 87 that is half Altoona.

Same way up here Clark. But, my weather couldn’t be better: rain and beautiful weather; but definitely no spring.

Went from Winter to Summer in KENTUCKY also.
Lilac blooms got froze two weeks ago…tomorrow will be record high of 90 (or more) for the date.

Grafts I did in February, which was warmer than either March or April, took 100%.
For April, the jury is out…but over 90 % apples succeeded…and over 5% failed.

We’ve had cold weather (for this time of year) and rain, until today, which is just unbelievably beautiful. But this is what everybody is paying attention to: 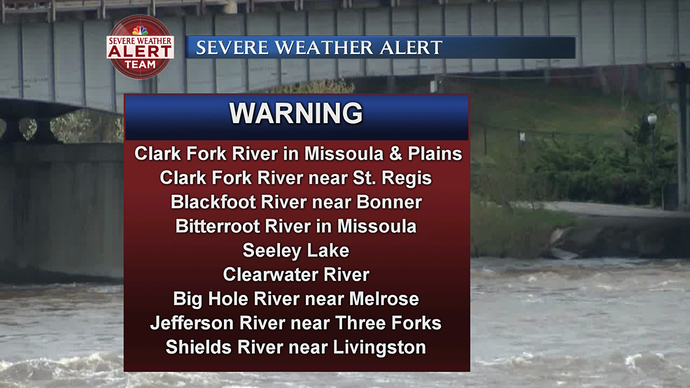 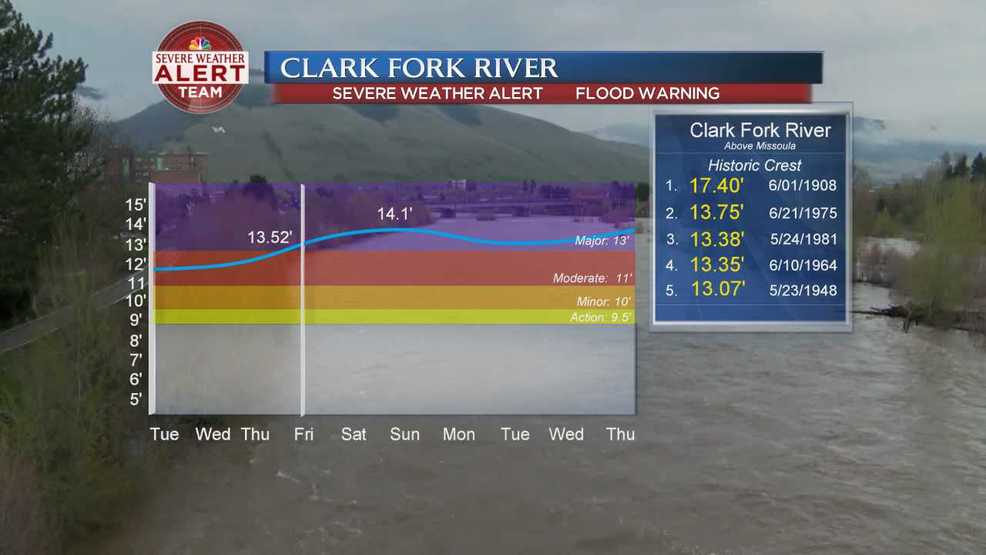 The biggest flood since 1908. It’s different now though because back then there was no Army Corp of Engineers to help control these things with levies and diversions. Some of these changes have been counterproductive though, because an area may just be forcing its problems down stream to be somebody else’s bigger problem. And, there’s an awful lot of mountain topsoil that just gets sent to the bottom of the lake down the way instead of being deposited in fields and deltas. We’re expected to hit 14 1/2 feet tomorrow

My bloom and pollination looks pretty iffy. I’m guessing 25% bloom, certainly less than 50%, and we’ll see if it’s warm enough now to get some bees working, assuming that there’s still pollen on these blossoms after all the rain!

Temp average here has been warmer than historical norm, but the swings between the extremes have been less than in the past few years.

For the past few years, the highest temperatures of the year here were in the first week of may, which reached the mid 90’s. This, of course, scorched my first round of grafts. Then it cooled off and summers were below average. This year we had the heat wave again at the beginning of May, but it only reach mid 80’s.

This weekend has been spring ish…50Fs/low 60Fs…rainy. We had coldest April ever…lots of snow…then it got warm and May is actually running well above avg in the temps…and way way above avg with precip. Extended range looks warm/hot for the entire country.

Yup. A touch of spring in Feb. Then went back to winter for all of March and most of April. Had a few hot days like summer here recently. Hopefully we can get back to ‘seasonal’

I too feel the weather is strange and that it has decreased the pollination of my pear trees. My New Century was covered in blooms on 4/25/18, but the other pears had not bloomed yet. I did not see one insect flying around that tree. I have yet to see a honey bee. The azaleas are normally swarming with bees and other insects, but over the weekend I counted only 3 bumble bees. I started mason bees this year. I wasn’t able to put them out (days in the 50s) until early May.

I assume this is the reason for the low pear count. Is it normal for each cluster of pear flowers to develop a fruit? The hosui was also covered with flowers but there are only about 10 pears remaining. The New Century has around 5, it had 11 last year.

What is suppose to pollinate these pears when they bloom in late April. The Penn State Extension says even the earliest native bees don’t start until May. I think nature is broken.

I don’t know if there is a such thing as a “typical” spring here in Iowa. Though I guess this year we also had a step-function winter-spring/summer transition. That doesn’t always happen, but I feel like we had a similar nearly step-function transition in the polar-vortex year of 2013/2014.

However, I’d say the transition to summer comes for us not in temperatures but in Dew Points. In spring, even if it gets warm, we get days with dew points in the 40’s or low 50’s. The air temp might be in the upper 70’s or the low 80’s, but dew points are generally tolerable. Dew points eventually get stuck in the 60’s+, and it gets hot. That’s summer.

Scorching hot here today! It’s still May and it hit 100 degrees F at my house! The closest town reported 95 degrees F so I would say that thermometer is pretty accurate. Our spring as your aware was freezing cold and these extremes make everything harder. 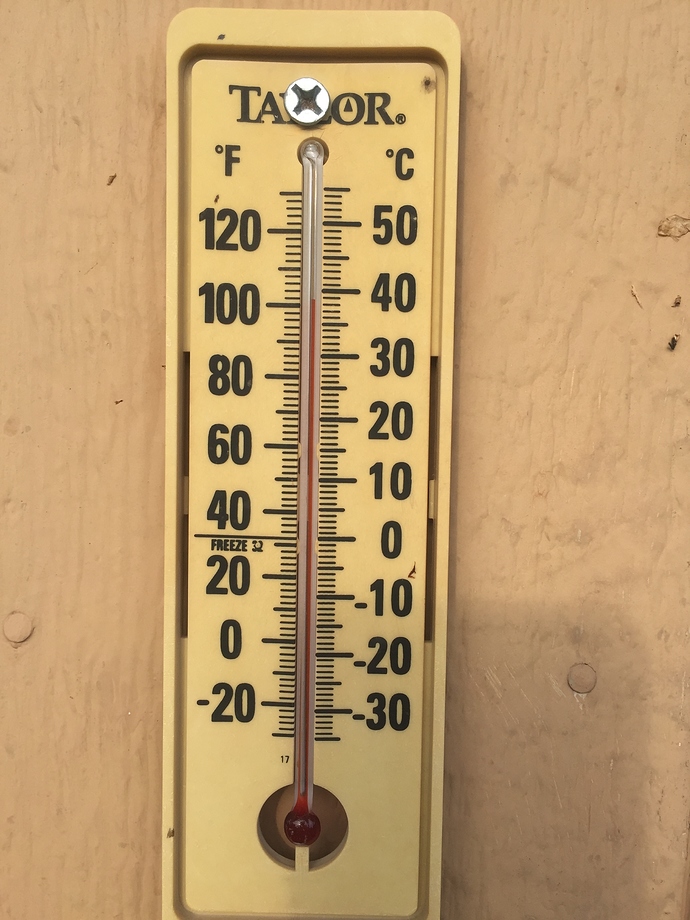 It’s been like that here in Texas too. We had some zone pushing cold temps this winter and a slow warm up in February. At my house we managed to just escape a late frost in a cold March and April. Now it’s pushing 100 and drought conditions. We are watering every day. May is usually our wettest month. Estimates are 2” of rain for the month and I don’t think I saw half of that.

The ponds are way down here as well Kate. We have seen a 3-4 foot drop in water! This time of year we are usually releasing extra water! 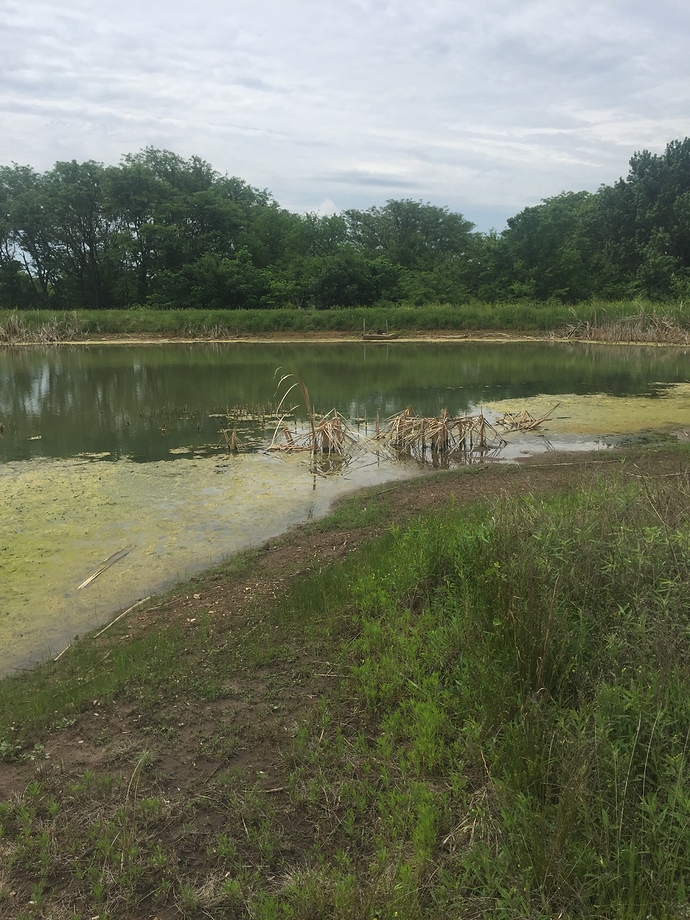 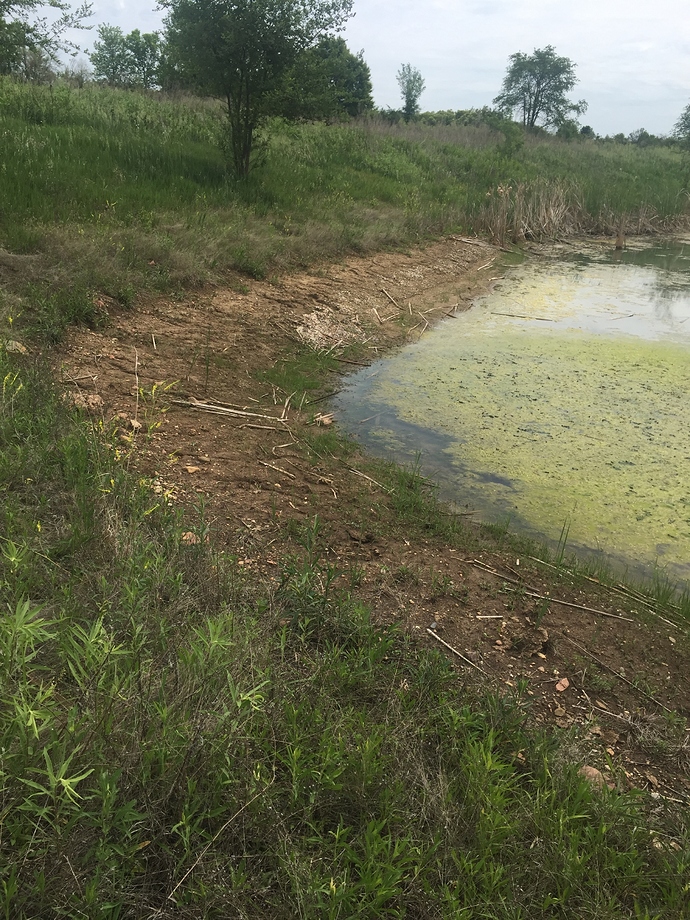 Fruits have been sugar sweet so far due to lack of moisture. We have received 5 inches of actual rain for the year and the year is half over. I’m not sure how much dew we have had. I’m planning to do pond maintenance ASAP. We are most certainly in a drought as expected. Here is a USA map

in case your not from here
http://ontheworldmap.com/usa/usa-states-map.html
This is a map of the areas experiencing drought
https://www.agweb.com/mobile/weather/us-drought-monitor/

Fruits have been sugar sweet so far due to lack of moisture.

Experiencing the opposite in NY(Long Island) with multiple days of rain every week. Every time I sprayed insecticides it rained shorty after so PC damage was high. When not raining humidity has been very high. Humidity has been 50 to 90% all week even with no rain. Brown Rot has been a problem even with fungicides used because of the frequent rain. All sweet cherries rotted and about 70% of Carmine Jewel.

All the mud ponds are completely dried up. The sun has been hot! Temperatures are a cooking 100 degrees the last couple of days. The yields have been lower on hay, fruit etc. even older established trees are losing leaves. Japanese beetles are in record numbers this year. We have migrated from a lush green to a Dusty and dry brown grass with cracks in the grounds. The grass crumbles under my feet when I walk through the yard. New trees are not even staying alive with water. Pear trees are very resistant to all these natural conditions and continue to flourish.

Peaches are 1/2 the size this year, hence half the volume sold. Tough year here.

Sorry to hear that Mark. Making a living growing fruit is very tough. I feel for you guys.

That stinks. Tough conditions if its yr living

@Olpea
Mark,
Yields have been half according to every farmer on every field with everyone I spoke with except western Kansas and they have twice the normal yields I’m told. One of my friends is working 9000 acres with a crew of half a dozen guys. One of my friends is a semi driver for the farms that hauls there grains & supplies. Another friend cuts hay on about 400 acres and raises grain on a couple hundred acres and he said my place did 60% of normal and most did 50% or less. It’s extremely dry nearing the equivalent of the last drought which I saw kill full sized trees in my area for lack of water.