Shirt sleeves today - I could have left apples on the tree longer. Went out and weeded the garlic! A few lettuces and spinach I started in (too) late summer are still growing under an makeshift cover of old tomato plants.

It’s nice, no denying. My power bill will reflect it, and no shoveling snow yet. Kind of weird, though.

I agree with what Clarkink said in another post. Seems like winter and spring are starting later. Still freezing in the winter just in later months.

73 in Denver today. We haven’t had measurable snow yet, latest that’s ever happened. I love fall weather but it’d be kinda nice to get some of the white stuff now that we’re in December.

This can’t be good for trees? There is some serious cold air locked up in Alaska just waiting to be released…it was -32F in Fairbanks 2 days ago.

Phoenix AZ was 85F this afternoon. Like summer in the desert.

Exactly I’m documenting things as I go but I’m not yet used to winter starting in December and spring starting in May or June This is several threads combined below. All my life I planted tomatoes on April 15th but nothing is as it once was.

I’ve grown to expect that type of weather as it’s becoming the new normal. 2022 spring I’m assuming will be similar. I’m going back over everything we documented about this trying to learn the new trends and the best ways to deal with those trends.

Strange weather - Will it get our blooms and fruit? General Fruit Growing

This was Kansas [image] This was Kansas two hours later this last week[image] Today we’ve been very warm and we have a blizzard bearing down on us within a couple of days. This weird weather has my plums all pushing buds. It looks like we wont be getting any plums this year. Anyone else had weird weather this year? What’s going on where you are?

Strange weather will it get our blooms & fruit 2018? General Fruit Growing

We didn’t have a spring at my location for 2018. Winter turned to summer and the time we normally use to graft and plant did not exist. Any other locations have similar weather? Right now my location is in a serious drought. We have had 4 feet of drop in the water table and many ponds that were 4 feet deep are dried up. Nearby locations have had more rainfall but they are still dry. My strange weather will it get our blooms and fruit thread was nearly 2 years old and getting hard to follow! To…

Today is October 29th 2019 and there are still pears and apples on the trees from the heavy crop we did not completely pick due to excessive water this year. Literally every tree had over 1/2 of the branches break due to heavy water filled fruit. Winter hung around an extra month or two this spring. Summer flooding went on most of the year with exception of a drought in the middle just long enough and hot enough to kill many new fruit trees. The ponds , reservoirs, rivers and creeks are still…

Strange weather will it get our blooms & fruit 2019? General Fruit Growing

Many of us are seeing extreme shifts in weather from 80’s into the 30’s. Temperature swings by themselves of some kind are not terribly unusual this time of year in early spring. We have also saw extreme droughts last year and a very wet and cold winter. Is everyone else seeing very intense weather in recent years? How does this impact your fruit growing?

Strange weather will it get our blooms and fruit 2020? General Fruit Growing

It’s November 21st 2021 and we still have fruit on the trees. Autumn berries and pears this time of year are really nice but it is very strange weather. Anyone else had weird weather this year? Nearly every year has been really unusual for about the last 5 years now. Winter hung around a long time this spring. Is it possible our seasons shifted a month? Could May be April now and November be October? Anyone else having strange weather that’s keeping you guessing on what to do and when? A…

We let the animals eat the windfall pears that might need them. We have an abundance and many animals and people are going into winter in very good condition from the large pear crop. Today is November 26 and pears are still hanging in the trees! Family, friends and wild animals harvested all they want. Gave some away to strangers or friends of friends this year as well. Hope everyone was blessed with a large crop this year. Next year I will focus more on selling pears as the crop continues …

The droughts and floods can be the worst here not the cold. This thread is a must read if we plan to raise long term orchards in Kansas. Floods like the one in 1993 can be devastating! 1951 flood was worse Great Flood of 1951 - Wikipedia

We rely on some spring rains and this year so far those heavy rains have not came. We have had cracks in the ground for about a month now. How is your rainfall this year? There is a huge upside which is less fungal and bacterial diseases.

This morning my dogs complained it was 59 degrees inside. They were raised by my former roommate Sheri as inside dogs. Slept sitting up covered up with a coat last night but I was pretty tired and forgot to turn up the heat. That’s pretty warm this time of year. We grew up in a house that was kept at 50 degrees. The old timers were equally as able to handle the cold some even better. They had tricks like the throw a blanket over your head trick and light a candle and hold it with your knees. I’m glad for us the weather is warmer @marknmt but don’t overlook the fact we have tricks as well that keep us warmer. Would bet good money there was more than 1 blanket on your bed. We are a month or 2 off in each direction.

We have been having a warm spell here in MSP/STP – I visited SD for Thanksgiving and it was also quite warm there. It didn’t quite sink in until reading this post how late in the season we are. I’ve lived in MN almost 8 years now; a few years ago I still had zinnias blooming in December. I also recall January 2012 in eastern SD when we had 60 degree temps – I remember finding snow trillium blooming that week. I think that same year we had 80 degree temps in March. Ever since I’ve just been expecting things to be “weird” and can barely remember what things are “supposed” to be like.

I don’t know if the ground has frozen, either. My cousin is still able to dig up carrots and parsnips from his garden (in SD) without much effort.

My orchard has acted normally, only the names of the months have changed.

My notes from early 2020 say bud break occurred in 6b on my earliest plum on Feb 27th, white on March 3rd and bloom on March 10th. Scary stuff when your last frost is predicted for mother’s day.

That’s what worries me.

Three high temperature records tied or set in the past week in Portland, OR.
Nothing spectacular, just low 60s.

If we are warmer in my location than historically, then I say ok. I don’t like the cold. So rather than moving, I’ll thank everyone for bringing the warm air to me. Do I see record temps broken about once every 100 days or so? Probably, both highs and lows. So, statistically I would expect something like that. I looked at the daily records for Dec in Lincoln, NE and none of it looks too unusual. If they barely break a record today, I won’t be shocked one way or another.

I’m shirtless wearing shorts and eating fresh picked pears today at 77 degrees Fahrenheit. Got a feeling I’m really going to pay for this. 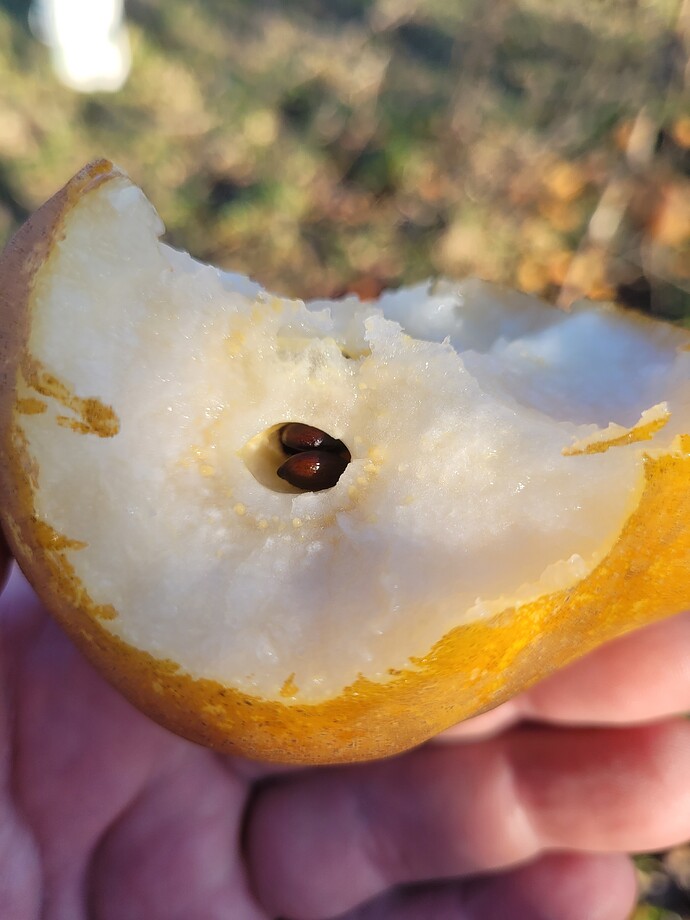 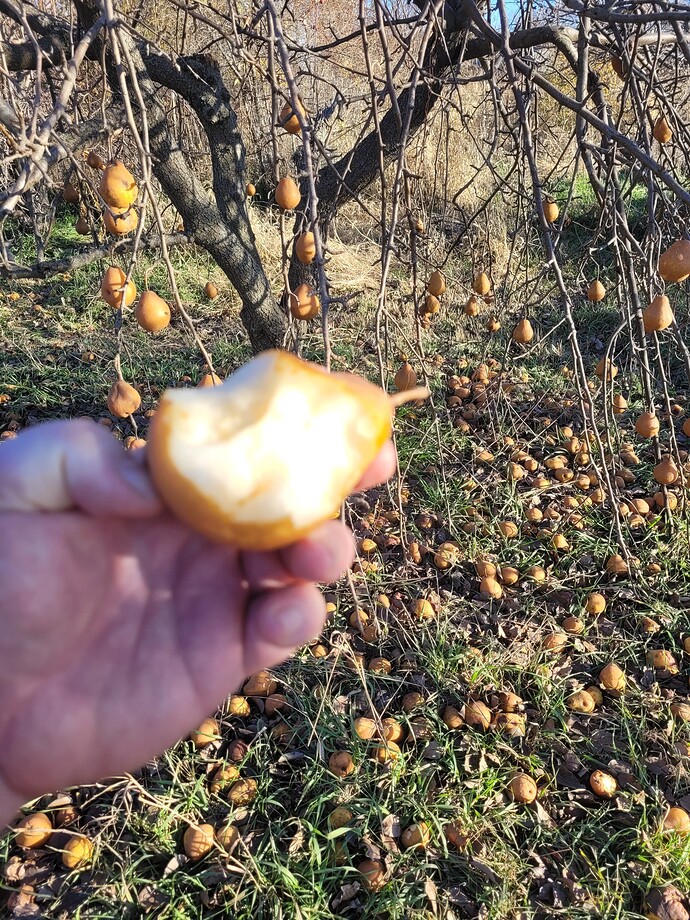 Got a feeling I’m really going to pay for this.

I know - sooner or later, the pendulum swings!

Eating fresh picked off the tree pears on December 2nd will not go unnoticed or unpunished. Will always remember 2021.

Got a feeling I’m really going to pay for this.

Which part? No shirt? or eating pears?

In the 1970’s, I kept track of the weather because I was keeping bees and needed to know when they were foraging and when they would get a winter flight day. We typically had first frost about September 20th. This year it was November 12th. We usually have last frost on April 15th, but a couple of times in the last 10 years we have had frost on April 20th to 23rd. Winter average temperatures are also warmer now than 50 years ago. I used to count on a flight day for the bees about March 15th. Now we have 2 or 3 flight days from the last week of January to the 15th of February. Summer temperatures are not that far out of line with normal. We sometimes hit 107F though did not get above 104 this year. Winter lows usually are in the range of 10F or thereabouts which is pretty close to historical averages. I’ve seen temperatures here in Alabama as low as -10 degrees back when I was a teenager around 1974. I went ice skating on a neighbor’s pond slipping and sliding around wearing tennis shoes on ice 3 inches thick.

We currently are getting daily highs from 68 to 72 degrees. It does NOT feel like December. I’m one of those people who sleep better in a cold room and do NOT like sleeping in temps this warm. Last month was fine, down around 35 degrees just about every night. But now it is nearly 60 every night.

Ofcourse I’m joking but considering it should be 0 degrees with no pears on the trees it does seem shorts would come with a punishment.

I usually expect to have diggable, non-frozen ground in my area until Dec 1 give or take. I don’t know if that has changed so much here in the last 30 years although last year, I could plant out stuff in somewhat protected locations until Jan 1. But then we hit -29F within about a month or so. I figure I will have a diversity of plantings and let the chips fall where they may, avoid the cow chips, enjoy the nice weather when it happens, and complain about the bad weather when it happens… but in reality be happy that I can rest and watch the nasty through the window. I’m thankful to have a break from growing plants. Not sure that I could have the right mindset to live in the south with plants always begging for attention!

Only a high of 53°F here in the Finger Lakes, but the day I was waiting for to press cider. 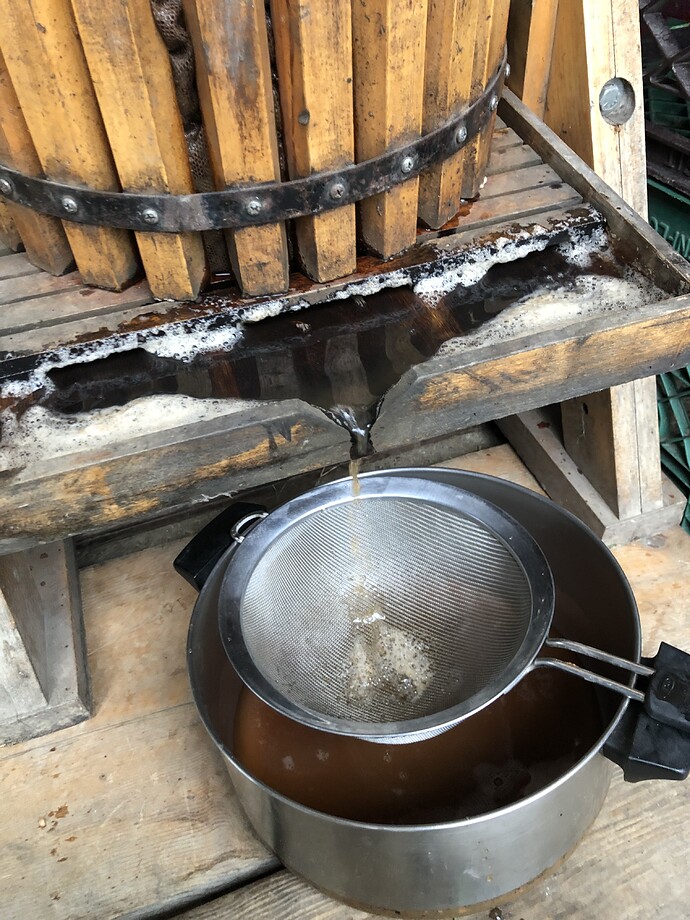