Strange Weather seasons are getting stranger!

Today is October 29th 2019 and there are still pears and apples on the trees from the heavy crop we did not completely pick due to excessive water this year. Literally every tree had over 1/2 of the branches break due to heavy water filled fruit. Winter hung around an extra month or two this spring. Summer flooding went on most of the year with exception of a drought in the middle just long enough and hot enough to kill many new fruit trees. The ponds , reservoirs, rivers and creeks are still full or over full and backed up. Winter started earlier this week and we already have snow on the ground and sticking in my part of Kansas since October 28th. Keep in mind its not unusual to pick apples and pears in November here and some years we were able to plant crops in feb, march or april but most years potatoes are planted on saint patricks day and tomatoes go in april 15th. This last year the night shade family of plants were all at least 1 1/2 month later going in the ground in our area. We have had a strange reduction in tornadoes and wind storms. Straight line winds go through at speeds high enough at times to cause damage far worse than most people not from the area could imagine. Im never one to complain about whatever weather we have but i always look for causes of such weather patterns. Its literally changing our crops we can grow. Its around 25 degrees F. How is your weather? Has it impacted your crops? Some of the snow melted in the night

Strange season indeed, Clark. Like you, Spring was late getting here. We had a relatively wet and cool summer (we can use the wet but needed more heat), and last night, after a few weeks of fairly nice fall weather (although with a couple of cold snaps) the temps have dropped to 7 F (-14 C). When the front blew in yesterday afternoon my hunting partners and I cut our four day outing off at three days (we were beat anyhow) and the snow was coming sideways. The highway was littered with jackknifes and slide-offs) and the piles of leaves my wife did while I was gone have snow on them. Grrr! 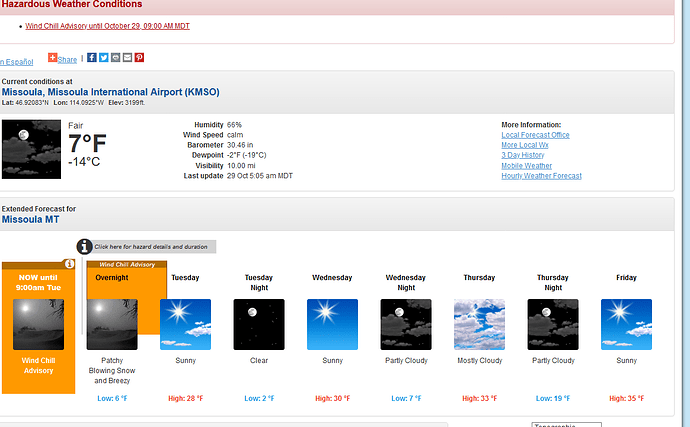 Yeah Clark when i first moved to kansas a decade ago we picked tomatoes into november several times… Last year they got zappped on the 15th and this year on the 10th… This is cold for october… Im no expert but from my reading I think part of the reason for the cold and wet is us being at the end of the solar cycle…, and it seems this solar cycle may be slightly colder than the last one was…

We got about an inch of snow last evening and it is sticking onto the grass. There are more snow coming in the next few days. I cleaned out my orchards and tucked away all the potted trees just in time. Now I can relax a bit.

I heard a report last week that we will have a normal winter. If normal is crazy, then I’m expecting normal also!

This year was a challenge indeed.

It is very strange indeed. Here in 5A Central Maine we still have NOT had a heavy frost or nighttime temps in the 20s yet…,and it is almost November!!! I still have pots filled with blooming geraniums on our front porch!

My personal feeling is that the Jet Stream has changed in a major way. Those upper level winds that steer storms and air masses have been messed up for years (compared to historical norms).

and I’m a couple hundred miles north of you and i can say its been a normal year here. spring was a little slow to come also but not out of the norm. whats been different here is our winters have been consistently snowier and colder than the average with no winter thaws like we usually get. i hear about global warming but so far haven’t seen it here thats for sure. matter of fact we had hotter, drier summers back 20 yrs. ago than we do now.

And here our recent winters consist of ice…,always straddling the 32 degree mark. Hate it!

remember the ice storm of 98’. you guys got it bad. we got 3ft. of snow from the same storm.

Here in Southwest WA State, it feels like this summer was bit cooler than last year, and there were some rains. Often there are no rains in my garden during the entire summer. I had a much better crop of sweetcorn than usual, harvested the last of it in early October. I plant sweetcorn in blocks every two weeks from mid May through late June for a long harvest. Tomatoes were about one month later than last year. I noticed on the last packets of tomato sauce from 2018, thee harvest date was a month earlier. Persimmons are about one month early (Yates) but I don’t know about Saijo and Nikita’s Gift. The fig crop was very poor. Hardy Chicago came in about a month later than normal, and are not very sweet. Some of the others did not bear at all, but Brunswick, which often gets no ripe figs for me, had a few from September through October. My best bearer, Lattarula, had basically none. My pears, mainly Orcas, had a very good crop for the first time. Potatoes, Swiss Chard, Turnips, and Beans did extremely well.

I don’t know if it was a weird year, or just year to year variation here. I think in general, the trend has been towards warmer overall, but some winters have had colder spells than what seems normal.

I thought it might be helpful to provide a link to the Climate Resilience Toolkit. It is linked via NOAA website. You can enter your own zip code and see what they project for your climate in the decades to come. Here are the graph projections for my zip code. One thing I wonder is if I should start planting some more warmer growing plants, like olives and pomegranates. I did try to grow an olive tree two years ago, but deer ate it. It’s interesting to think about, anyway.

Posted on the other weather thread about our recent snow. Between the last snow (4/27) and first snow (10/28) there was only 185 days between them.

Also the past several years around here have been exceptionally wet growing seasons with multiple flood events in spring, summer, and fall.

One word to describe my area is WET. We’ve had some very wet years around here the past decade or so. Weather data goes back about 150 years locally. 4 out of the top 10 wettest years have happened since 2010–2019 already makes the list and the year isn’t done yet (over 40 inches so far) .

I’m sure if you look at a couple hundred years of data you could find cycles of dry and wet …cold and warm…although i’m sure in “warm” phases you can still get a very cold period…and in wet phases you can still find a dry spell. If you go back 10’s of thousands of years…100’s of thousands of years can find well defined climatic cycles. Ice cores have shown this pretty clearly/.they go back about 800,000 years (ice ages/warm periods/mostly cold)… Then if you go back millions of years you can find times when the planet was tropical from poles to the equator and times that the entire planet was all ice…

I sometimes go and read the history from Ft. Snelling near Minneapolis…they have a lot of reports from the 1800s (1820-1869)that show some massive cold, snow and warmth mixed in… If you go across the Atlantic you can find history from London that goes back 100’s of years…when the Thames was freezing over and people were ice skating on it.

I love researching past weather. I would love to know local observations for about the last 10,000 years

What was the warmest, the coldest, the snowiest…hottest summers, coldest winters… I bet the numbers would be crazy.

Like in the PNW, my tomatoes were a month later than they were two and 3 years ago (I couldn’t have a garden last year due to remodeling). Here in my part of N Cal. we had the coldest wettest May I can remember followed by a very hot summer (hot for here is regular highs in the high 70s and 80s with a few 90+ days) with very little fog. My Brandywine tomato is just peaking now and looks like it will be giving me large tomatoes for a couple more weeks. I’m glad I started my fruit orchard this year because the weather this summer was perfect for the trees and most my trees took off. Last summer was very cool and foggy.

Despite the heat, it was still not hot enough to get sweet melons. Maybe next year I can put one of those single plant green houses over a melon and see if that helps.

Also, we still haven’t gotten any rains yet… normally we get one or two rains in October/late September. Last year was the same and just like last year parts of the state are up in flames because of this. There is rain in the forecast finally 10+ days off. I hope it is real!

Wet weather limited pollination, but everything was early in Kentucky…some September apples ripe by August 1st.
And in 2017 and 2018 I hardly had to water nursery stock at all in containers sitting in shade.
Not so this year…had to water lots…and lost half dozen potted apples, a couple pawpaws, and a Canaan fir tree because twice a week wasn’t good enough on the watering.
Also lost a number of rooted cuttings of various kinds to the dry conditions.
Fall…very hot through Oct. 3…first frost about normal, Oct. 14, but earlier than I had expected this year. First freeze will be 10/31 or 11/1 here.

Without needing to read the scientific literature professionally, the layman has little incentive other than idle curiosity to lavish the necessary resources on the effort. Should you be one of THOSE PEOPLE who do, I offer this (long) link, which I’ve been ruminating upon lately:

Kirkby is a high-energy physicist and, as such, stands apart from the consensus of climatologists over global warming. The article is a (now 12-year old) summary of trending research. I note that his research at CERN is ongoing. 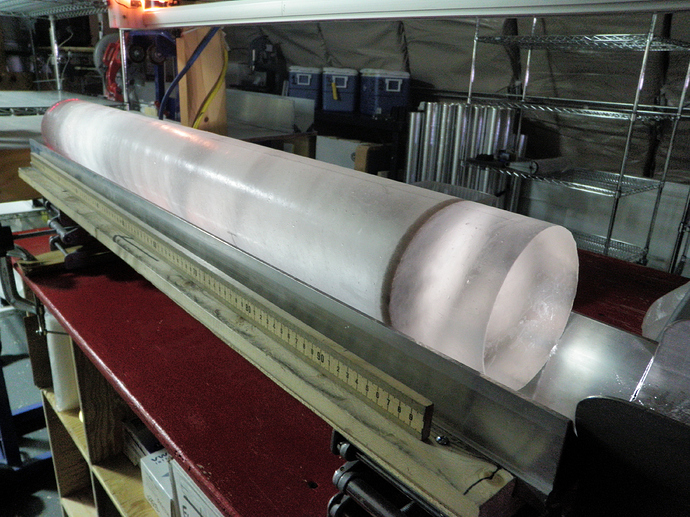 Ice cores are drilled in glaciers and on ice sheets on all of Earth’s continents. Most ice cores, however, come from Antarctica and Greenland, where the longest ice cores extend to 3 kilometers—over 2 miles—or more in depth. Ice cores from the cold interior regions of polar ice sheets provide exceptionally well-preserved and detailed climate records. This is because the lack of melt at these locations does not corrupt the record of trapped gases or blur the record of other impurities. The oldest continuous ice core records extend to 130,000 years in Greenland, and 800,000 years in Antarctica. 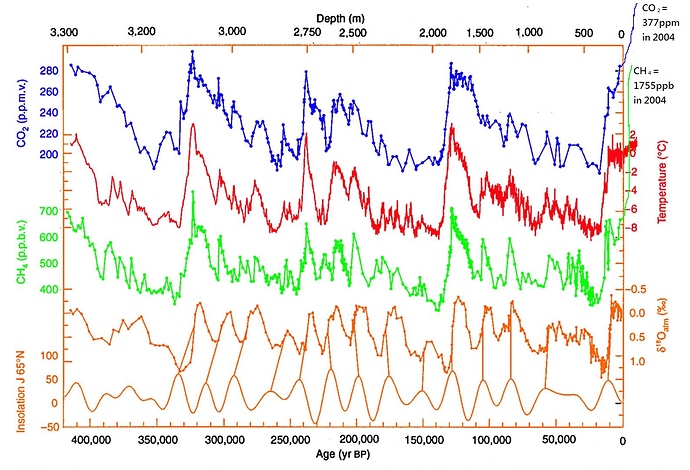 There is loads of data out there. There are many factors here…volcanic activity, plate tectonics, space rocks, how the planet is tilted in relation to the sun.its orbit…

Today, I found a more recent (now 10-year old) talk about the same slides as in the above paper and containing some newer material: