I finished making my first batches of jam of the year last week. Aside from black currant, my favorite which I make each year, I use whatever I have on hand.

Since elderberries, gooseberries, sour cherries and most white currants were eaten by birds, that left red currants (Rovada) and Boysenberries. I wouldn’t have any red currants (or at least, not enough to be useful), except I did a bad job of controlling a wild grape vine. By the time I pulled the vine off of the large Rovada bush, the currents were turning ripe. Evidentially, it also kept the birds from noticing them. I picked the ripest half (about a quart) from the bush. When I came back a few days later, it was stripped clean.

The boysenberries have been gradually ripening, so I’ve been picking a hand-full each day for 1-2 weeks. Each time I eat the ripest while picking and the rest of them get tossed them in the fridge. 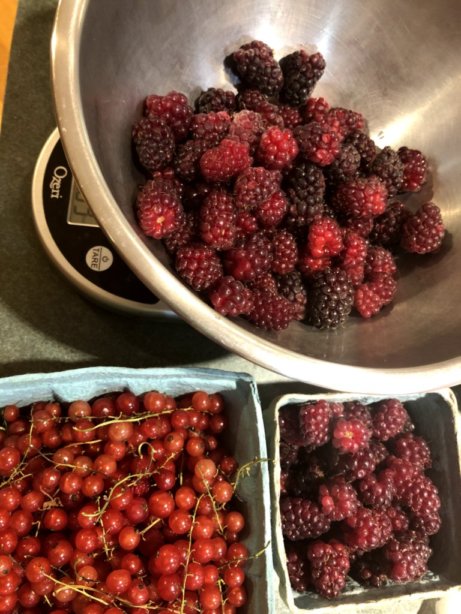 End result is 5 jars of jam and a happy (but evil looking) daughter. I told her that she looked like a witch over her cauldron… 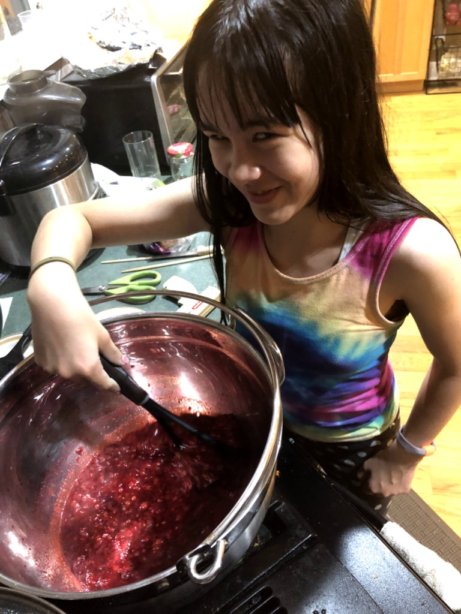 After she went to bed, I made the black currant jam. After all, why cleanup twice. 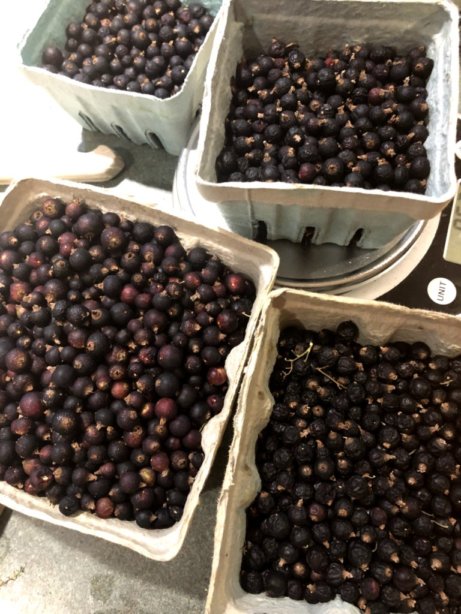 The end result was 9 jars of jam, I’ve already started on the first and this may be the best I’ve made (or it’s been a while since I’ve had any). One of the things that struck me was how much less jam I need on each spoonful of unsweetened yogurt (whole milk Siggis is best). The jam is so strong that you don’t rely on the sugar to provide flavor.

I’ve made it for at least 5 years, but I was only able to fine notes about those 2. But it seems this ear was on the low end from a sugar perspective. I did try to remove all the stems and the under-ripe berries, so that probably helped with the flavor. 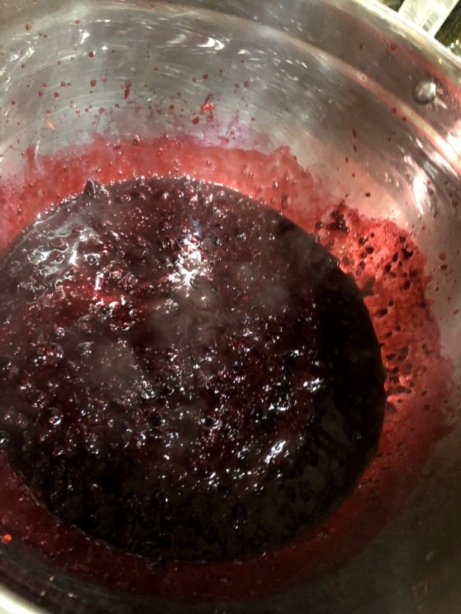 Assuming that I protect them from animals, I’ll probably made peach and hardy kiwi jam later in the year. Peach because everyone else seems to like it. And kiwi because I thought it was pretty good. And because kiwi vines can produce more than I can quickly consume…

Looks good. My kiwi are just starting to seriously produce and jam might be an option this year. Does the flavour survive the cooking or does it change significantly? I hadn’t considered it, but I’m willing to be convinced.
Berries seem very sweet this year, my black raspberry batch was just right at about a third of the “suggested” sugar amount.

My kiwi are just starting to seriously produce

At the same time, the quality/brix was lower. I’m not sure if it was due to the massive production, or the rainy/cloudy period last summer. I’m hoping the hot & sunny weather we have had will help get the brix up.

They are looking pretty productive again, though I’m not sure if it will reach 28 quarts again. 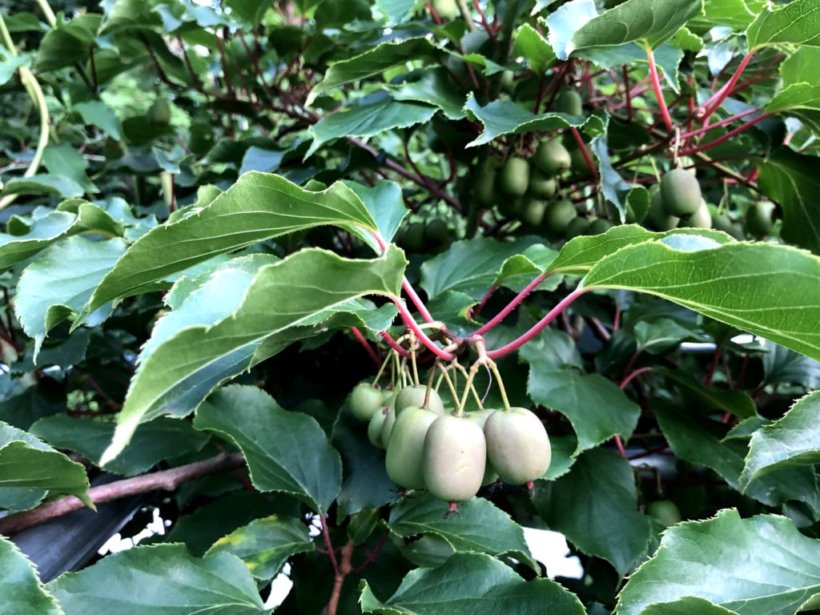 The jam was good, though not as good as black currant. It kept quite a bit of flavor. I quartered the larger ones before cooking and the end result still had large pieces. I may cut a bit smaller this time. I used sugar in a 0.61 ratio, which seemed pretty good. Unlike the jam I made this summer in the pics above, I used pectin for the kiwi jam. Anything with currants doesn’t really need it, due to their natural levels. In the past, I’ve tossed white currants into other jams (like blackberry) just to get their pectin…

was just right at about a third of the “suggested” sugar amount.

I think the suggested amount is normally pretty high- at least 1:1 ratio by weight or over. You may have cut it back even further than I have.

Bob what varieties is your kiwis? I have only 1 for now, but still small. Not expecting fruits at least for 2 more years. It was a gift and supposedly is self-fertile variety, here called siberian. Dont know much more for now.
By the way black currant jam is probably the best tasting I have tried yet. I have few bushes, almost all of them are black variety called titania. And some red. Didn’t heard for white ones. I must check now

currants are also good for adding in other fruit jam, as you mentioned.

Bob what varieties is your kiwis?

I don’t think I’ve heard of that kind. Is it an argunta or an arctic?

I have a Titania. It is still young, but I have a positive impression of it so far.

Didn’t heard for white ones. I must check now

The white ones taste about the same as the reds. They have pectin, but not a ton of flavor. They don’t vanish as quickly to birds though. Pink Champagne is a good white/pink variety, as it gets a bit sweeter.

Hmm I will not have fruits for few years more I see. Mine plant is planted 2016-2017. I think that is arguta, siberian is just a name as expression for cold hardiness. Here if you want to sell something just name it siberian

I’ve been making freezer jam with my b. currants. i find you preserve the flavor better than cooking. i just mash them well ,add a little sure jell and some sugar/lemon juice. i too most enjoy it over plain yogurt. my 4 tiben i started from cuttings from Drew are almost 3ft so by next year ill be up to my ears in currants! ill have 8 bushes total. my consorts produce well but the berries are on the small side. they are super loaded this year and are just coloring up now.

Hmm I will not have fruits for few years more I see.

I think it depends on the variety. Issai (the only partially self-fertile one I have) had a few fruit the first two years. It is also possible that I could have moved up the first real harvest by staying on top of pruning. In some of the past, low production years, I had initial flowering and fruit set, then lost the fruit well before harvest. I think that hardy kiwi are so vigorous that self-shading becomes an issue. Then, if you wait too long to prune, you end up cutting off the outer parts, leaving the bare wood from the inside of the overgrown mess. For the last 2 years I have been doing a better job of keeping the excess growth in check.

b. currants. i find you preserve the flavor better than cooking.

I don’t think that I want any more flavor. I can’t stand black currants as they come off the bush. The cooking and a bit of sugar is the difference between something I would spit out (actually, I do, as I sometimes test the berries…you can measure how good it is, by how long it takes me to spit it out…) and great jam.

they are super loaded this year and are just coloring up now.

Mine were a bit late this year, due to the cold spring. I see notes from past years of me picking on 6/28, while this year I started on 7/4.

i too most enjoy it over plain yogurt. 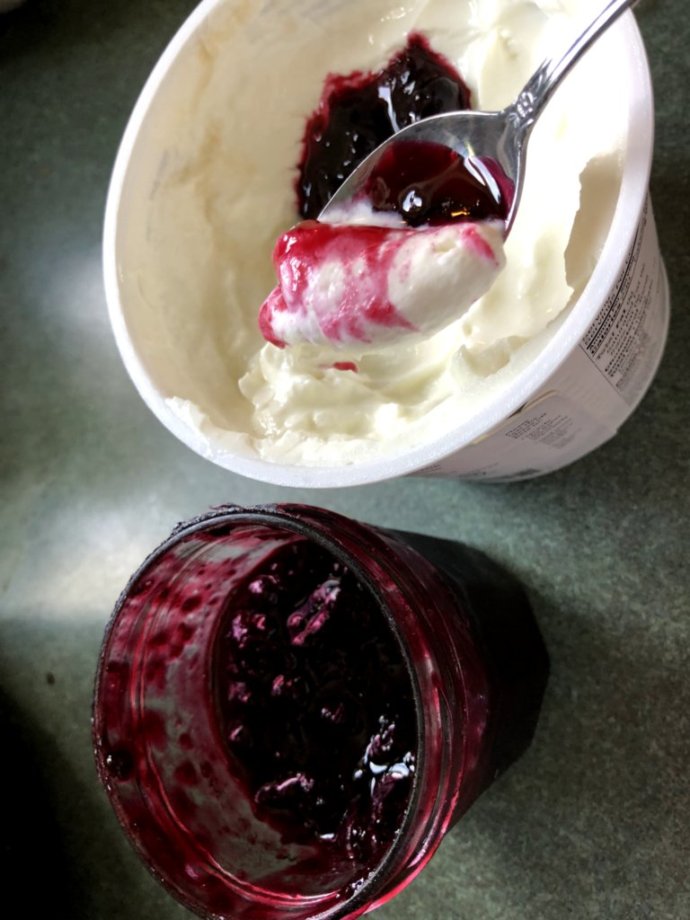 i like b. currants strait off the bush but they need to be dead ripe.

@BobVance
Have you make any jam this growing season?

We have had so many strawberries. After eating and giving them away to neighbors, it is time to make jam. 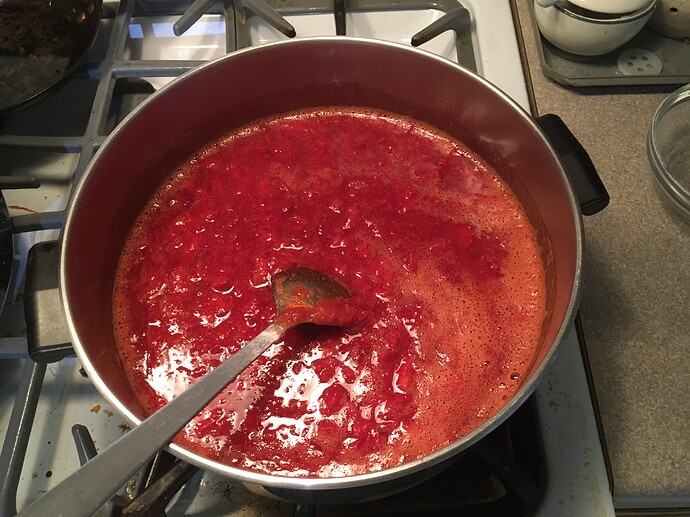 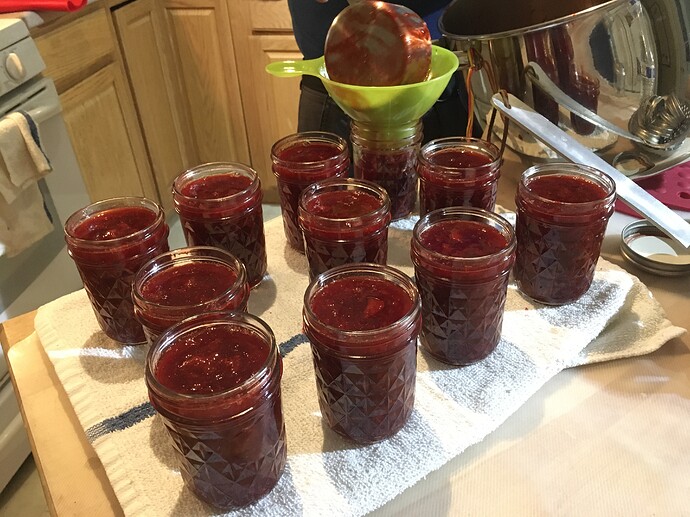 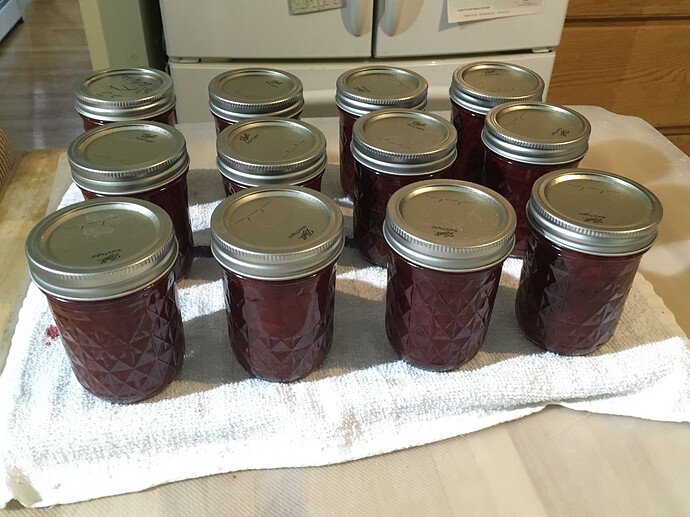 Im hooked on freezer jam…takes 30 mins or so to make and lasts over a year. 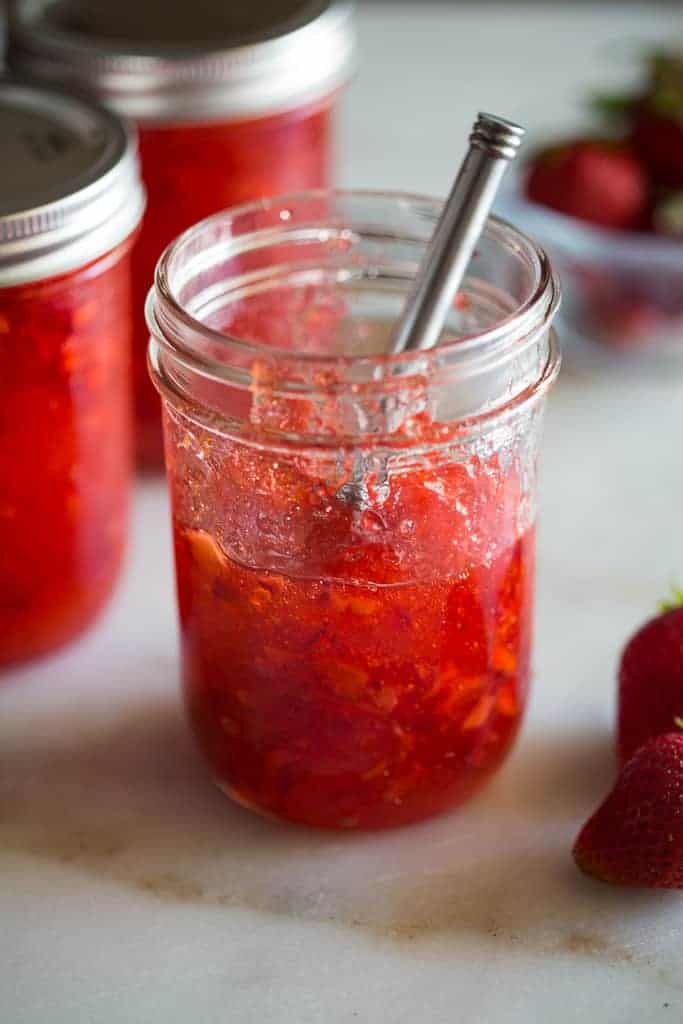 30-minute Strawberry Freezer Jam is homemade jam that is perfectly sweet, made in less than 30-minutes, that you can freeze and enjoy for up to 1 year!

Have you make any jam this growing season?

Not yet. My brother made some honeyberry jelly which wasn’t bad, but not super flavorful like black currants, sour cherries or boysenberries. Mulberries have been ripening, but I either eat those straight (Oscar and IE) or they are too boring for jam (Kokuso).

My brother is actually coming over later today to pick the boring fruit that I’ve been ignoring (Kokuso mulberries and white currants).

Black currants are starting to turn black, so jam-making is just around the corner. I’ll also have to try making some from american elderberries which I have growing at a rental and are flowering for the first time. I don’t know how different they will be from the European varieties I’ve grown in the past.

I have a few lbs of Juliet from last year in the freezer. May take them out to make jam. They are too tart for us to eat them fresh. They will be processed.

My brother is actually coming over later today to pick the boring fruit that I’ve been ignoring (Kokuso mulberries and white currants). 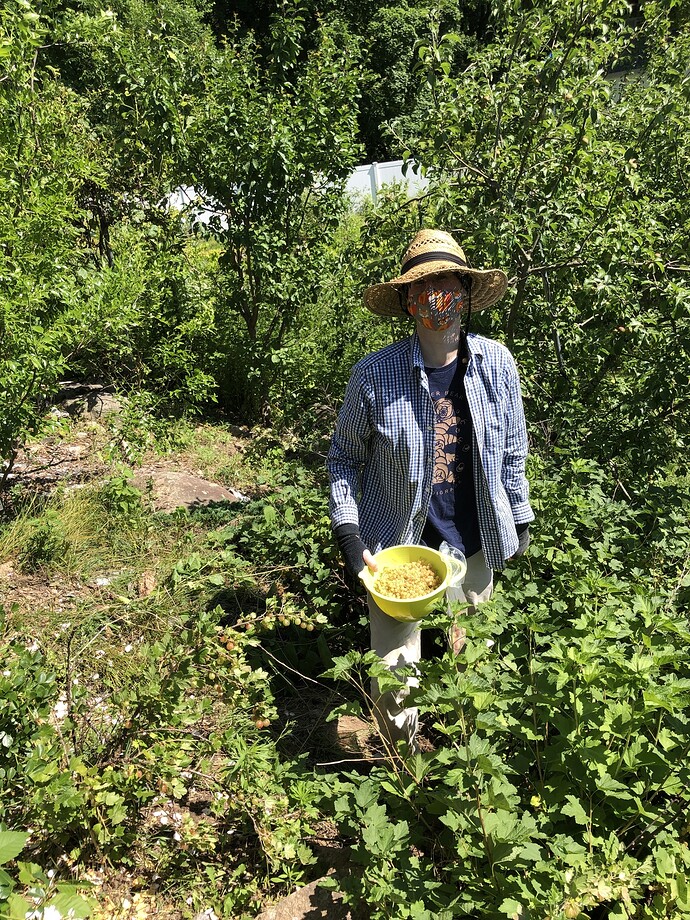 Oh no- a masked bandit is making off with my white currants (White Imperial)…I asked him why he was wearing a mask while alone picking and he said that it helps with pollen and dust.

He was able to get almost as much Kokuso mulberries and a few handfuls of gooseberries (Trixia, I think). He asked if I wanted him to pick anything for me and I told him I’d be happy if he picked/pulled me some weeds

Nice mask, too. I wear mask in the garden for that reason, too, as I am allergic to dust and pollen. Before Covid, I used to feel a bit out of place wearing a mask while gardening. Not anymore.

Is your brother good at making jam like you are?

Is your brother good at making jam like you are?

From a conventional consumer standpoint, I think he makes better jam, as he gets the jelling right, while I tend to not be very concerned if it flows a bit.

I just made a peach and jalapeño jam. The jalapeño from my garden, but not the peaches, however they were soft so that’s why I decided to make jam instead. Debating whether to make fig jam or not. Maybe I will make a fig clafoutis, I need to use my port. 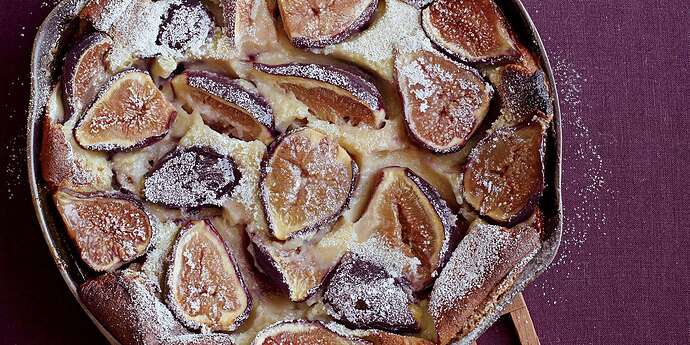 Chef Matthew Accarrino of SPQR in San Francisco packs this rustic pancake-like dessert with fresh figs and tops it with port-infused whipped cream.