Taylor’s Gold is an excellent commercial pear that gets imported from New Zealand off season locally, but apparently has been tried in Oregon and Washington. I think its a club variety, haven’t seen trees available anywhere. But it also should be well off patent, so only the Trademark is likely in the way of growing it at home.

Any chance this is the same pear?

My understanding is that Taylor’s Gold is a Russeted sport of Comice.

For what it’s worth, I’ve had it answer a question like this in the past for me by calling customer service and asking to relay the question to the horticulturalist. It took some follow-up, but eventually I got the answer. As an aside, I have seen something labeled as ‘Taylor’s Gold’ at a scion exchange in the last year or two, so there’s probably wood in circulation.

I looked thru all my resources Jafar and neither lists a Taylor’s Gold or a Russet Comice. What they do list is Russet Bartlett which I read more about because it is the original Bartlett - just that it was grafted and brought to Mr. Bartlett’s and then named (England I believe.) Come US another pear shows up that is found to be Bartlett again. A name beginning with William.

First though I looked at USDA Grin’s accessions. They don’t list either Russet Comice or Russet Bartlett. They list Taylor’s Gold and do say it’s a sport of Comice.

I always wanted to grow this pearbut never seen it being sold anywhere, must be commercial/club, at least in US and Europe. I think Regal Red Comice (red sport) is at least available in US from GRIN, they made it club in Europe

Edit: I’m typing faster than I’m processing information. I see that Barkslip has just shown me that it is available from the germplasm repository in Corvallis as ‘Doyenne du Comice - Taylor’s Gold’

@murky,
I bought Taylor Gold, together with several other Euro pears, from a Cornell store a few years ago. I like it the least. It could not hold candle to the other varieties I bought.

Pictures of some European pears for you Pictures!

Hubby and I continued our pear taste- testing tonight with 3 more pears, Concorde, Harrow Sweet and Abate Fatale. Concorde - sweet, smooth. Brix 13 Harrow Sweet - sweeter, a bit grainy. Brix 19 Abate Fetel- sweet, smooth and perfumey. Brix 15. I like them all and thought HS was the sweetest (before measuring brix) Hubby likes HS, too, saying it tastes like a pear should be. So far, with 6 E pears, we like them all with HS is our favorite and Taylor’s Gold the least. We have Potomac and …

You bought fruit or trees?

Not sure I’ve tasted Harrow Sweet. I’m guessing you got a subpar, or not ripe Taylor’s Gold.

Fruit. Bought all the pears Cornell Store sold at the time. Their own fruit, I guess. I assume they all picked at the right stage.

Just ate a Harrow Sweet that was damaged and fell a week ago, it was sweet(even not quite ripe when dropped), sweeter than Seckel I ate yesterday.

If I remember correctly, Taylor’s gold is available from Fowler nursery. I agree it is a superb fruit. To me it is better than Harrow Sweet, but I am not so fond of harrow sweet. Perhaps because I always compare HS to Magness and Seckel (I buy them from the same orchard), which are my top two pears.

Interesting. They have the other pear I’m looking for, Bronze Beauty. But its not in their “backyard” catalog. Perhaps only for commercial growers then?

I would still try buying it from them. Some nurseries will still sell the commercial varieties to home growers. Perhaps if you visit them in person, but try first by phone.

That might be a bit of a drive for murky. All interstate or not.

It depends on how much he is craving for it 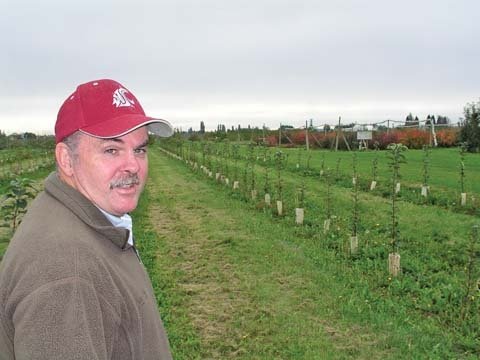 Yeah, if it was just me, or if the family were more into it, I might consider it.

As it is, I haven’t even made the 3 hour trek to Seattle for fruit trees

Alan, we’re in SW Washington state. We have an extended Winter/Spring/Early summer that is cool, cloudy and rainy. I suspect we’d make pretty Taylor’s Golds.

I got my first Seckel pears from my small tree this year. Those were mostly russetted

My Russet Comice from Raintree also has a tag labeled ‘Taylor’s Gold’. It should be the same pear. It is susceptible to rust, but I do not know how much more or less than other varieties. My Bosc from Burnt Ridge has no rust. My neighbor’s tree 60ish yards away also has rust.

How does it do with Fireblight?