Does anyone know anything about this cultivar? The local grocery store had some available so I thought I’d try them. 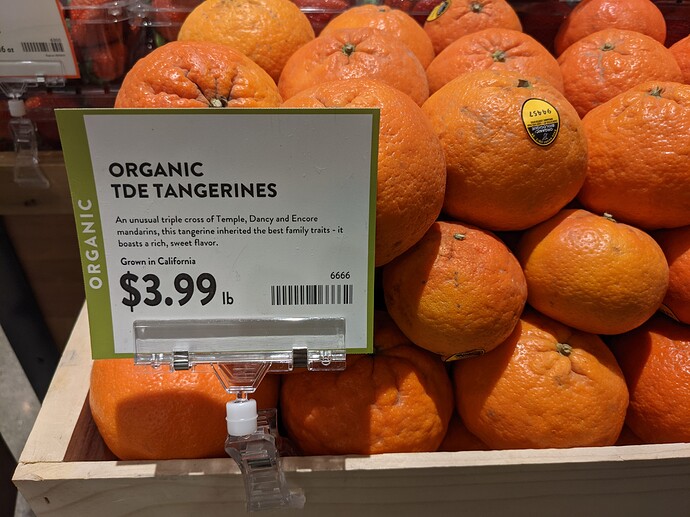 They have a really unique flavor (very sweet, good tartness, with a “tropical” taste), and very juicy segments. Easy to peel and a pretty large fruit for a mandarin. So far one fruit was entirely seedless, the other had a single seed (which I’m germinating), and I have one more fruit to go so I’m hoping for another seed. 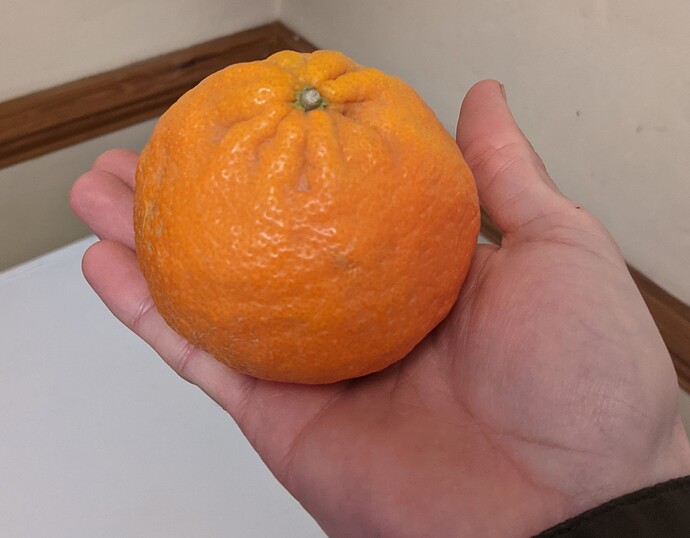 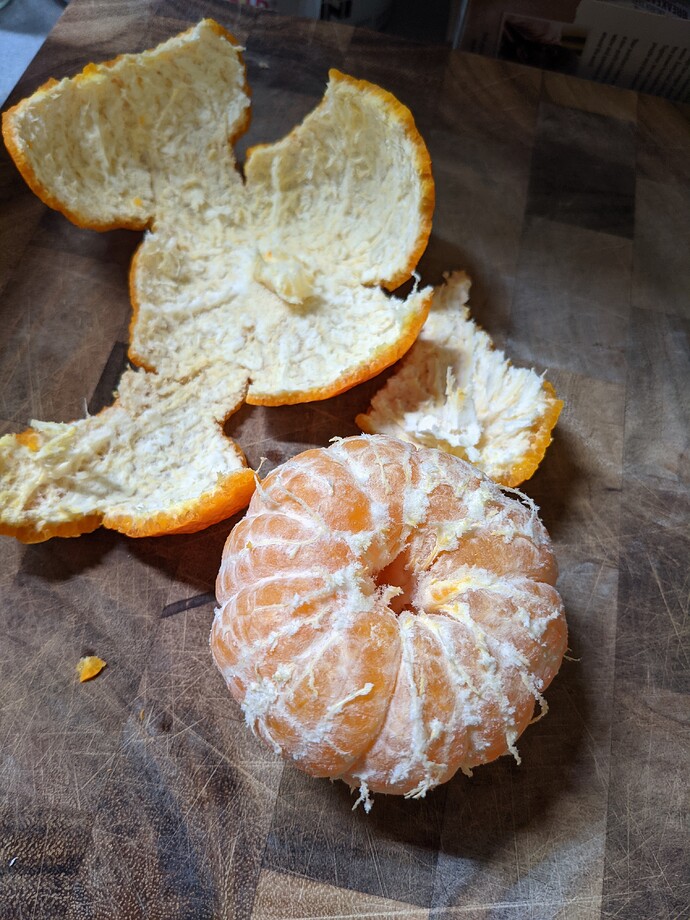 They sound great! Cool that you’re trying to sprout them.
Can you share what grocery store? I’m headed to Sea-Tac on Monday.

It was my local PCC, I bet any of their stores have similar selections but this was the West Seattle one.

I doubt the mandarin you are growing will produce true to name. Most cultivated varieties are grafted. If you like this variety best bet would to be to find a seller of the plant. All trees of one specific variety are basically clones the the OG tree.

I doubt the mandarin you are growing will produce true to name. Most cultivated varieties are grafted. If you like this variety best bet would to be to find a seller of the plant. All trees of one specific variety are basically clones the the OG tree.

The seed looks to be polyembryonic based on the seed’s lumpy shape (will know better once it germinates), so I’m thinking a decent chance it’s a nucellar clone.

That is most likely either Shasta Gold, Tahoe Gold or Yosemite Gold (TDE 2, 3, 4 respectively). Not sure if TDE 1 is a named/released cultivar.
https://citrusvariety.ucr.edu/citrus/other_mandarins.html

Thank you for the link! Looks like probably Yosemite Gold based on the size/weight (mine averaged 6.4 oz) and photos.

That says it’s a triploid hybrid, does that mean it’s unlikely to have nucellar seeds? The description says “virtually seedless,” which matches my 1 seed in 3 fruit.

No problem. I was reading up on them recently and thinking about adding one more (I just planted Shasta Gold). All three are fairly similar, tho it says Tahoe Gold doesn’t hold as well on the tree. I’ll probably add Yosemite Gold.
Four Winds Growers look to have them in stock. I can often find them at the local nursery or occasionally the big box here in CA. 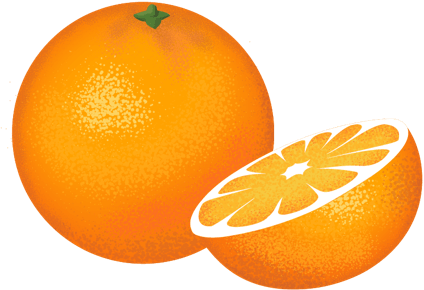 Our semi-dwarf citrus trees for sale are shipped directly from our California nursery to your doorstep! Collection includes lemon, lime, orange, and more!

Looks like these patents expire in June 2022. In case you wanted to put in your calendar a date for cutting scions 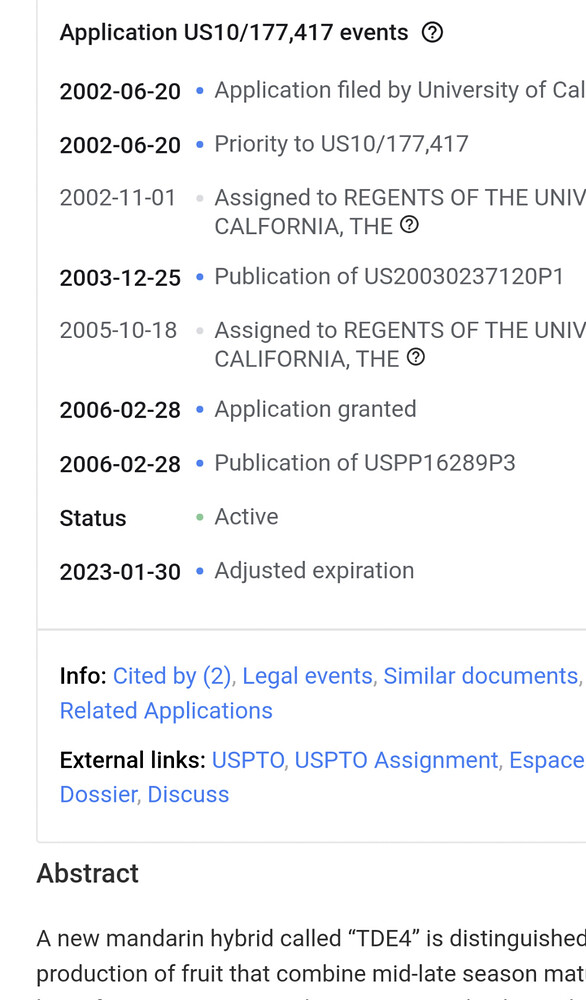 My Tahoe Gold tree just arrived, I am pleasantly surprised by the size… I ordered the 12-18" size, but this is over 2’ tall! 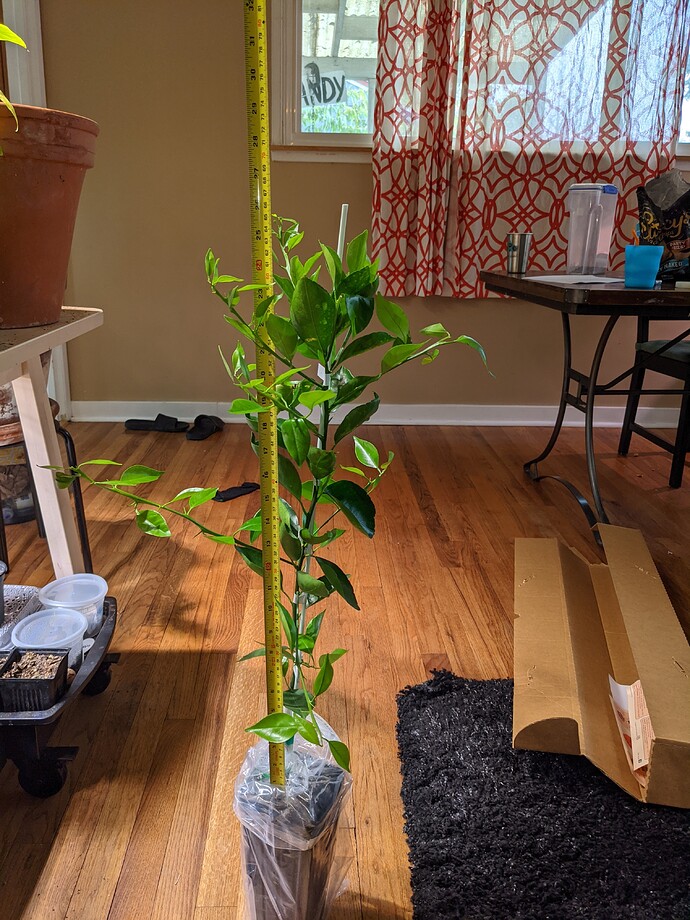 Well after a summer in the greenhouse, my Tahoe Gold pushed a nice flush of new growth, but a few weeks ago started getting splotchy, and now it’s getting worse. Anyone know what’s causing this? Really hope they didn’t send me a sick tree… 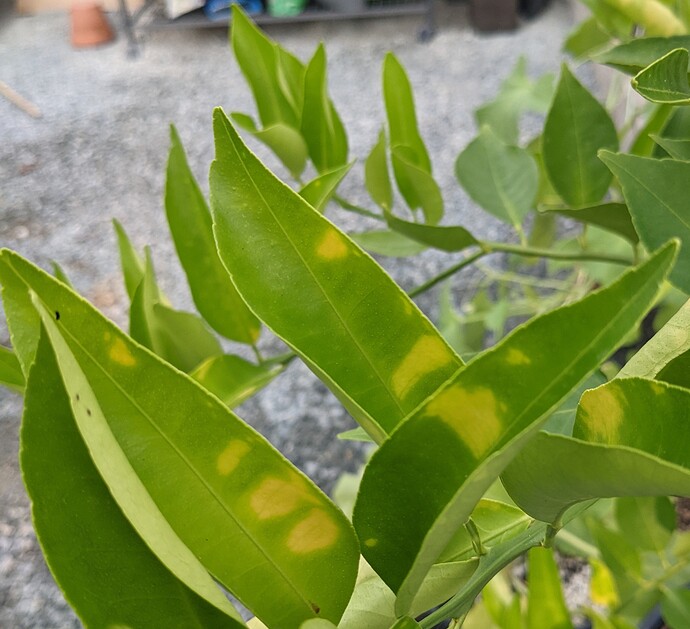 I don’t doubt it will be true to seed, 99% of citrus are polyembryonic unlike stone fruit or apples. 99% are almost impossible to hybridize. That is why most of the hybrids are clementine, temple or tangelo crosses which are monoembryonic. Clementine, temple,pummelo, and tangelo are among the few not true to seed citrus. I have grown out many seedling and fruited them in ground, for example shiranui which just fruited for the first time last year after a 7 year wait(actually fruited for a friend, when the budwood became available in Texas I quit growing the seedling). Current projects are sugar belle(clementine x minneola), seedless daisy, mandared, and neopolitan). These I can occasionally get as fruit in the grocery store but they are patented and aren’t available in Texas.

Sugar belle has fruited and my mature tree was frozen back to a stump this winter but the graft survived. Took 7 years before fruit. Seedlings will fruit in the ground but not likely in a pot. Citrus needs to get quite large 12+ feet before it loses it’s thorns at the top of the tree and blooms. However, a friend had marumi kumquat seedlings fruit in a 3 gallon pot!

Seedless daisy grown from a seed? Yes, it has one seed per 10 fruit. Mandared or sumo/shiranui, dozens of fruit and only one seed. Seedless for citrus means less than 3 seeds per fruit. 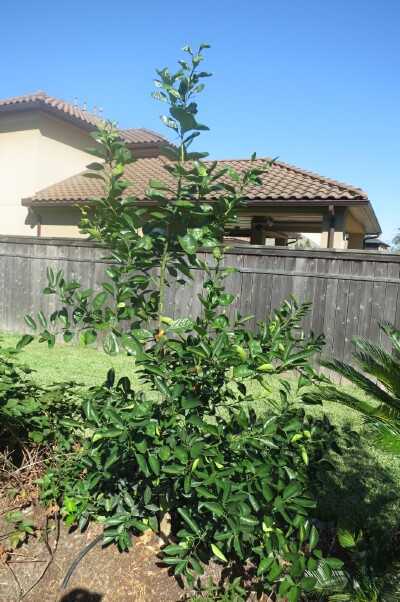 BTW last time I was at Pike Street Market in Seattle a few years ago I saw mandarins with attached flowers and buds. They don’t send fruit like that from California to Texas! Parents lived in Seattle area from 1944-2020 with one 9 year break to launch moon rockets for Boeing. I was born on Capital Hill in 1954.

Your might send pics of your leaves to Four Winds Growers.

I sent them the photos and they say it looks like sunburn, but that seems unlikely to me since it’s been in the greenhouse all summer, apart from a few hot days when it went into the shade of a large tree. And none of my seedlings in there are suffering similarly. Here’s one right next to it: 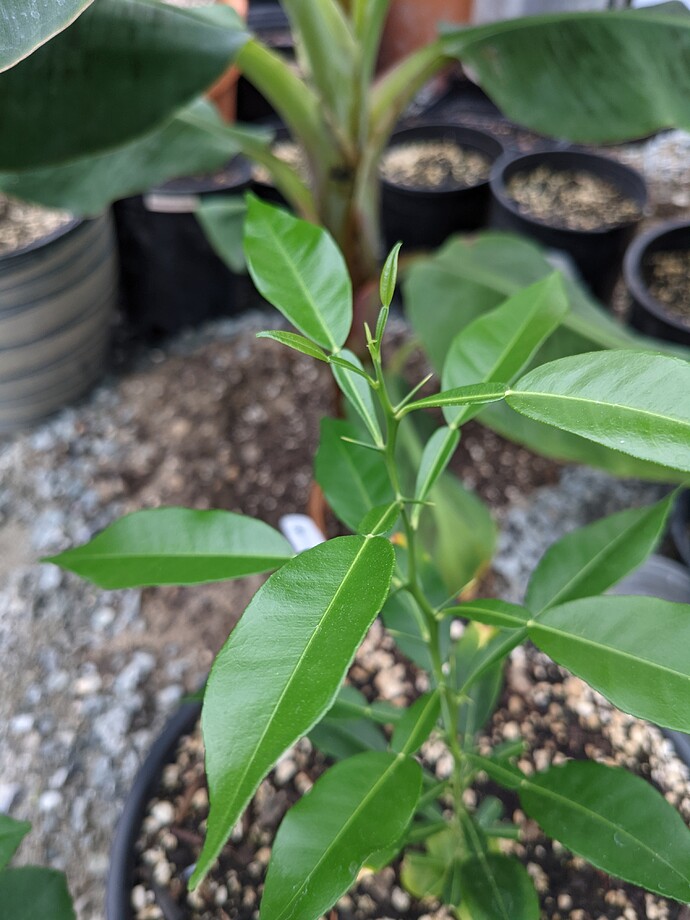 The splotches on the Tahoe Gold seem to almost exclusively be on the most recent flush, but the older leaves do look a little splotchy and disfigured too: 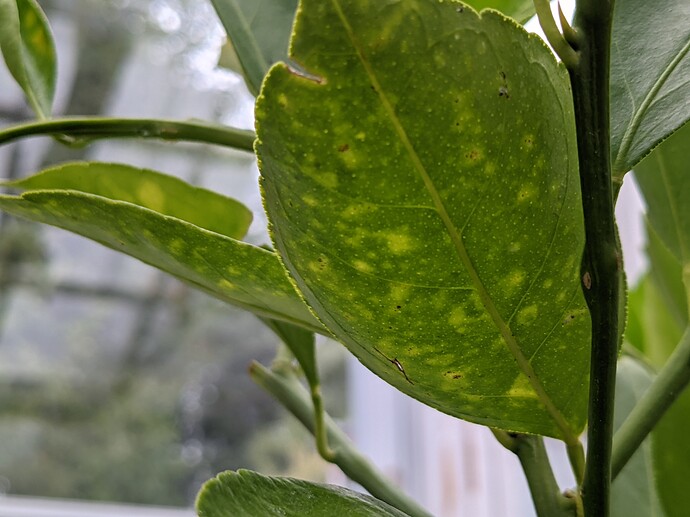 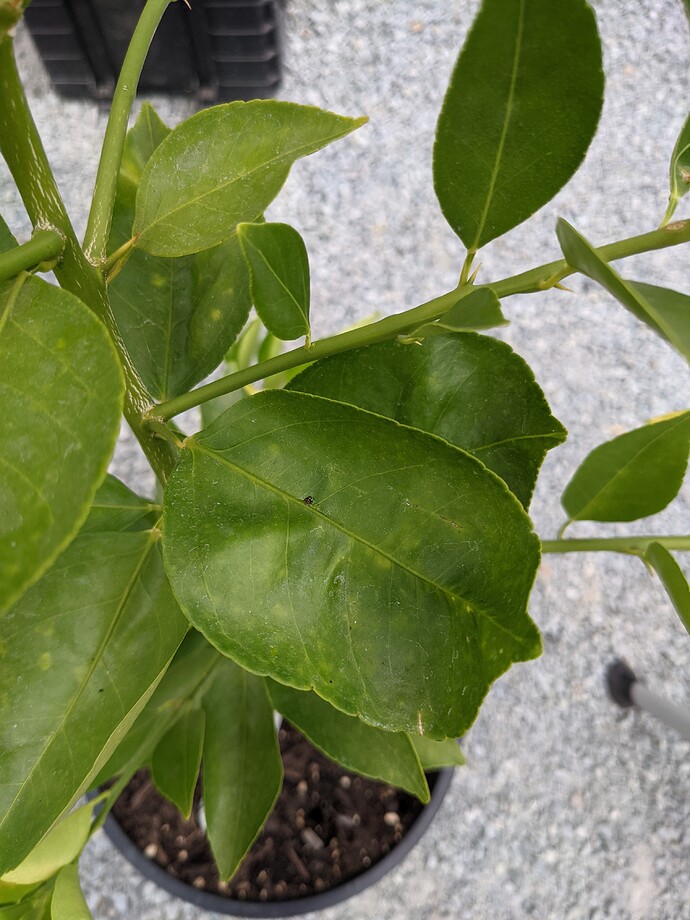 Updated theory from the nursery is mesophyll cell collapse, which I guess looks possible from photos online at least. Guess I’ll make an effort to water this tree more often, and maybe pot it up sooner than later with a little dry fertilizer in the mix.

The TDE3 tree seems happy enough on the new growth, and is loaded with flower buds ready to open, so I’m guessing whatever was causing that issue was shortlived. 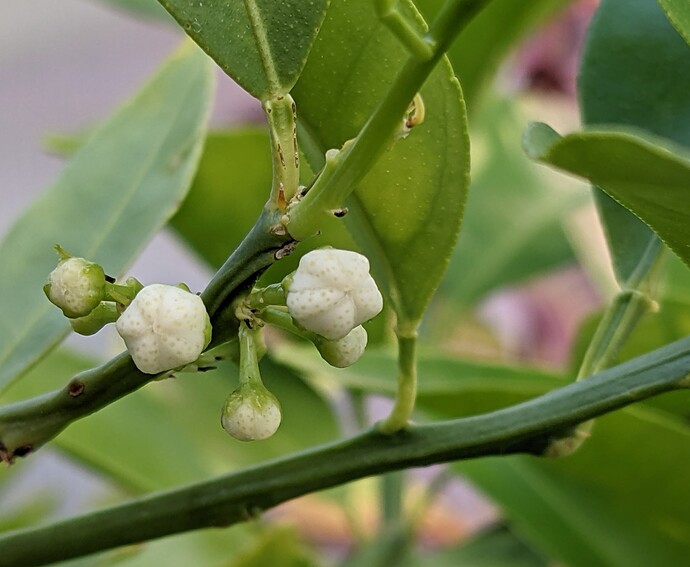 I am guessing that it’s one of these 4 cultivators