One of my focuses for my garden projects is to grow leaves for teas. True Camellia teas probably aren’t happening here, but I have lots of other options. I already have NJ tea, which I love, as well as bee balm, sweetfern, anise hyssop, fragrant roses, and sweet goldenrod. I’ll of course be adding some of the more common herbs (mint, chamomile, etc) and probably licorice. I also like adding leaves from Rubus species to other teas, if I can find a spot for them. Eastern Hemlock (decidedly different from the poison variety), Arborvitae, and other conifers make a delightful tea.

I recently added some currants and persimmons to my collection, and I’ve read that both of these can make great teas as well. Does anyone have experience with these?

I’ve read that a lot of what i grow makes good teas but I’ve never tried them. someday.

You’ve definitely got to try raspberry leaf, either on its own or blended. It’s quite nice. They often include that or strawberry leaf in commercial herbal teas to provide a little tannin and to balance the flavor.

And pine needle tea is one of the best things going.

Sweetfern and Rubus is a favorite of mine.

I’ve tried spruce needle tea . was pretty good they say white cedar is even better. ill have to try the rasp/ straw tea sometime. i have plenty of both. lots of mint also.

what is sweet fern? never heard about that one.

Comptonia peregrina. Super common, at least here in southern New Hampshire. USDA doesn’t have any official records for The County, but I’m skeptical as I think of it as more of a northern plant. I see it on sunny roadsides and disturbed sites, powerlines, those sorts of places, especially on sandy soils. I kind of think of it as liking many of the same spots as bracken. It’s a Nitrogen fixer and does well in dryish, miserable sites, but doesn’t compete well in rich sites. 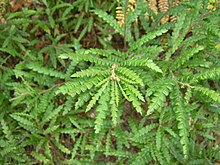 Interesting thread. If you can grow loquats the leaves make a good tea. D

Yes, intriguing thread. I’m not a tea drinker but I’m interested in the medicinal properties. I planted two yaupon hollies this winter and they seem to be doing okay so far.

I love yaupon tea! I want to try growing it here in southern NH, but it will almost certainly need winter protection or to live in a container that I can bring indoors.

@pokeweed I’ve never heard of loquat tea! I’m not entirely sure if I can grow loquat here, though I’d love to. Even if it’s hardy, my understanding is that it likes to fruit over the winter, which wouldn’t work out too well in NH.

Fermented blackberry leaf tea, you could also make with raspberry leaves. Pick young leaves, bruise them up, put in glass jar with lid on, put in the back of your car under the rear window when it’s hot, leave for 1-2 weeks, take them out and dry them in a dehydrator, tastes a bit like black tea.

Pineapple weed, I love the aroma.

I really like tea made from dried Prunella vulgaris. It’s good as a cold drink during the hot months. Some folks think it’s bitter but I taste a refreshing sweetness.

Neat! I’ll have to track some down and try it.

Some other plants that I forgot are spicebush (I have some seedlings going now) and sassafras. Both make excellent teas.

Great thread @jcguarneri, I would like to add to my garden some of the plants that you all mentioned not only for the tea purposes but for the medicinal properties and benefits. I really don’t know much about what plants are good for this purposes and where to get them from. Any leads would be appreciated!

I like to make tea from the lemon grass! Is considered medicinal and it taste good as well!

Thanks! I’m not gonna lie, I’m not a big believer in most herbal medicine claims beyond relief of a sore throat or cough. To be fair, there are some that actually do have some pharmacological action, like Echinacea, but most of those are potentially dangerous to take without medical supervision. With that big caveat, Fedco seeds has a whole bunch of medicinals in their herbs section with descriptions of what they’re supposed to do. I think Southern Exposure does, too. I also used to have a copy of Peterson’s field guide to wild medicinal plants. I found it a little vague (it would list every possible use that anyone and their toddler had ever claimed for a given plant), and was pretty much useless for identification purposes, but it was a pretty thorough exploration of what is supposedly out there in eastern North America for medicinals.

@Ruben Your climate should be warm enough for you to successfully grow various Camellias and Ilex species to use for tea. These are the sorts of teas to wake you up in the morning or keep you up at night

Shade that Camellia sinensis for an extra dose of caffeine.

About 100 sweet goldenrod seedlings waiting to find homes in my yard. This has a great flavor and would make a respectable substitute for French tarragon. 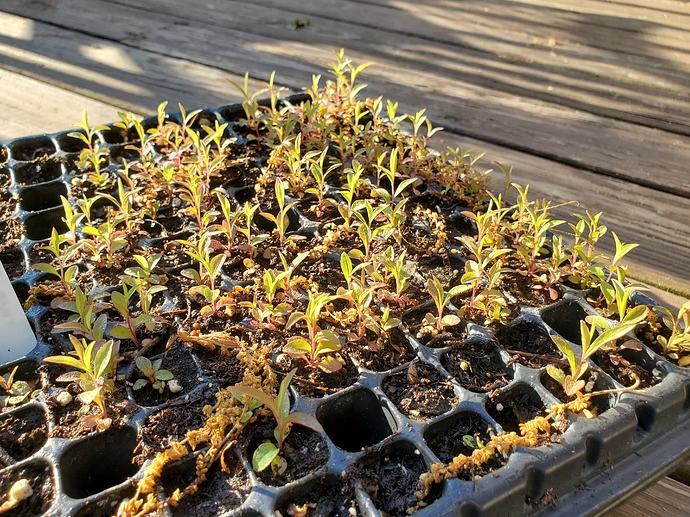 Also, check out @lordkiwi 's other thread that I completely forgot about!

I like everything in my garden to have a purpose beyond orimental value. A lot of the plants I am planting double as tea and herbal teas or adjunct in beer making. 3 actual Camilia Sinesis I hope they survive this year. Hops Vines Salal, Gaultheria shallon, a relative a wintergree, leaves make a decent tea and berries are supposed to taste good Wintergreen, Gaultheria procumbens, actual Wintergreen. Tea and pain releafe. a natral sorce of asprin. Dogwood, Cornus Mas @wildforager suggest th…

interesting foliage. i would have remembered it if id seen it here. maybe it prefers sandy soil. ours is mostly clay here.

Loquats would’nt hold fruit over your winter, but they might survive o.k. You use the leaves to make the tea. D