Welcome! We are pear fanatics:)

Chojuro, Korean Giant, Yoinashi, Shinko does anyone know the difference in the fire blight resistance on these? as well as flavor comparison? thank you!

I have all of them, but some have not been around that long. So far they have all been trouble free. Everybody knows what KG is about. Chojuro I think deserves more respect than it gets. It’s my oldest. Shinko is good, but not great. Yoinashi is too new. Might I suggest Raja. It grows twice as fast as any pear and the fruit is slightly different. Super juicy with a softer fine grain texture. I’m putting in more.

In the past, there were conflicting opinions on Shinko. Those growing this variety in the east coast felt the pear was OK, not very good. Those growing them further inland including in the mid west love it. The one attraction of Shinko is it is supposed to be one of the most fire blight resistant.

@Robert I grafted Raja on a Euro pear. I let it fruit this year. Unfortunately, it was the only variety that got fire blight, even when the weather is much drier than our typical year. I probably will remove the graft.

what makes shinko good and not great?

Mamaung may be correct in that Shinko acts different where it is grown. Here it is smaller than the others and with a lighter taste. I tend to like the deep flavored ones.

@mamuang Raja is advertised as FB resistant like shinko. Judging from all the experiences on here, there are no real FB resistant varieties. All of them can get it and it’s just bad luck.

I grafted many Asian pears. In my location, most have had little strikes here and there. The ones that had more fire blight strikes have been are Raja and Shinseiki.

I do one copper spray during dormant. That has been helpful.

@mamuang Random question… Can you graft a Euro Pear on an Asian Pear tree?

Most likely the weather, and the sunlight hours, some cultivars prefer the east side of the country, some prefer the west side. Some cultivars need way more heat than others, and some can have great fruit in central Vermont.

Will Shinseiki actually set fruit without a separate pollinator?

I have shinko, Hosui, chojuro, Korean giant, Nijisseiki, and niitaka. In my limited experience, only chojuro and Hosui have avoided FB. My one year old grafts of Tsu Li, shinseiki, and drippin honey have also fared well. Dwarf trees have been especially problematic as there is so little wood that can be lost without major harm.

I have always sprayed copper at dormant but will be adding streptomycin in the pre bloom and bloom period.

‘Shinseiki’ is partly Self-pollinating/self-fertile. So no it does not need cross pollination.

Any partial or self- fertile fruit tree also benefits from having another pollen-compatible variety (called pollinizer, not pollinator) to cross pollinate.

You should put your general location in your profile, at least the county or state you live in. Zone 7 in CA and MA are very different. It will help us give you better advice. 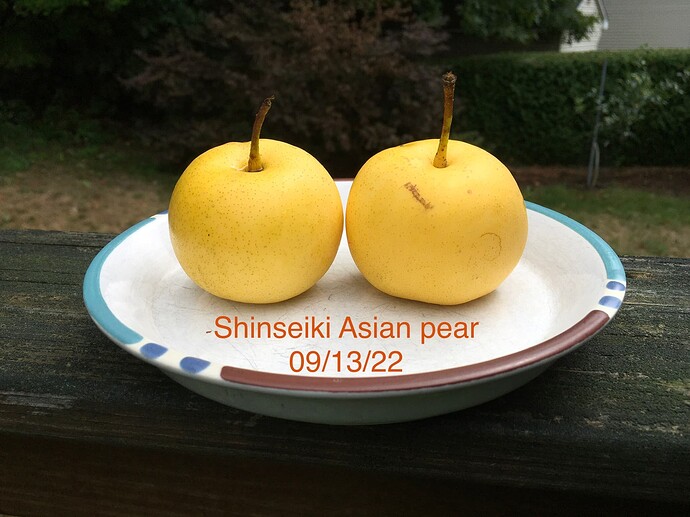 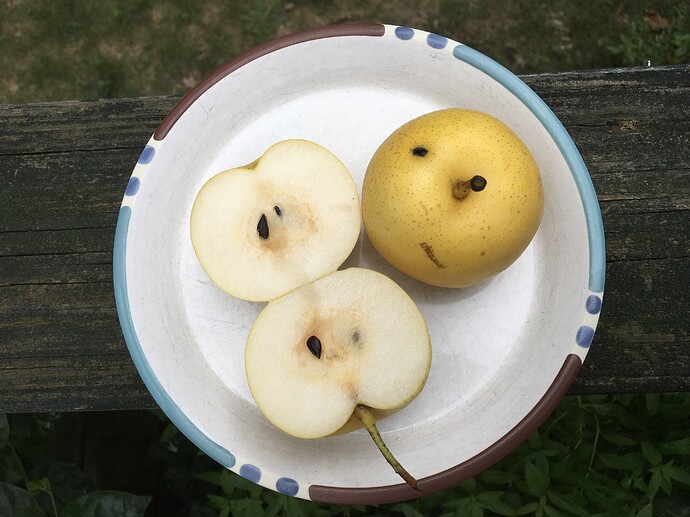 My Koshui had lots of problem with either FB or fruit split. I have butchered 1/3 of the tree this year and only had single fruit. The taste is very good, but may not good for my climate. My other asian pears (including hosui) seem very FB resistent.

Hello everyone. Anyone knows the Ceri nashi and Kimizuka wase nashi? Thanks!

I picked some Shin Li today. They can be pretty variable in shape. It’s a large pear if properly thinned. 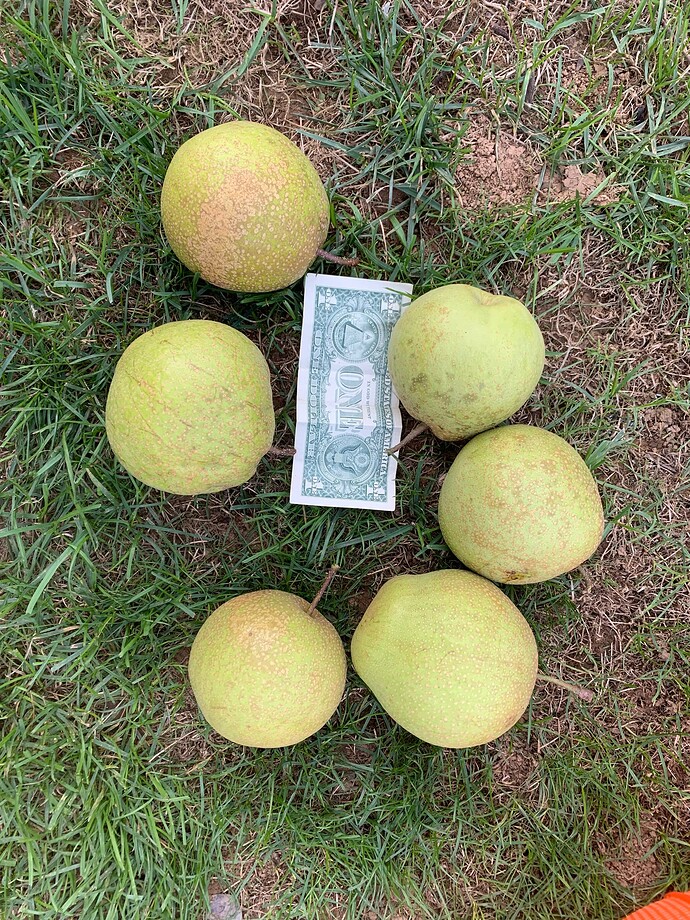 Here’s one in comparison with a Korean Giant that dropped.

I agree. Mine are even bigger than yours. Not my favorite, but have to appreciate the mega size.

Here’s my report card for this year…

A+: Hosui, Kosui. When I picked these right they were crisp, sweet, juicy, and wonderfully aromatic - perfect asian pears! A bit heavy on the bug/rot damage but I’ll put up with it for the taste.

A: Shinsui. Similar to the two above but they ripen earlier when the bugs are too active … I lost nearly all of them.

All of these are great pears I am keeping. I removed a dozen or so I liked less. Korean Giant is just starting to ripen.