I would be more interested in the varieties you removed. My trees are all either last year or current year grafts so I won’t see fruit until next year.

how is the flavor? does it need a particular pollinator?

HI Seattle:)That grouping should provide sufficient diversity to have your pollination covered. And those are probably the best out there. 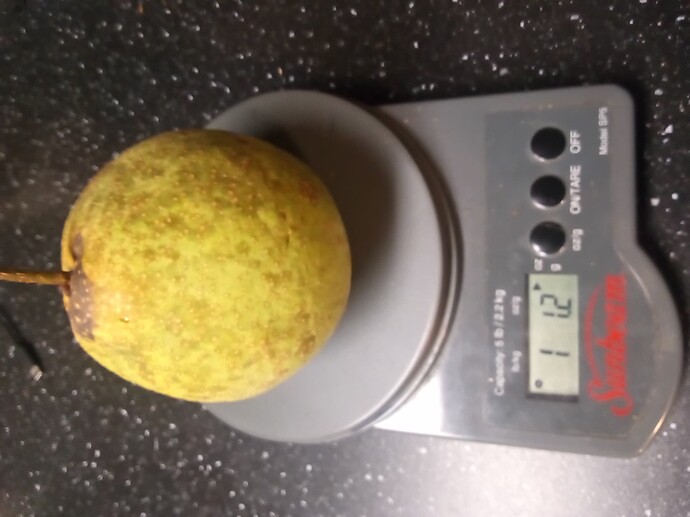 1.12 Pound Shin Li. Biggest pear I grow. Might be some bigger ones still on the tree. This one got hit on the top by a bee.

HI! Any one knows what variety is this nashi? Thanks! 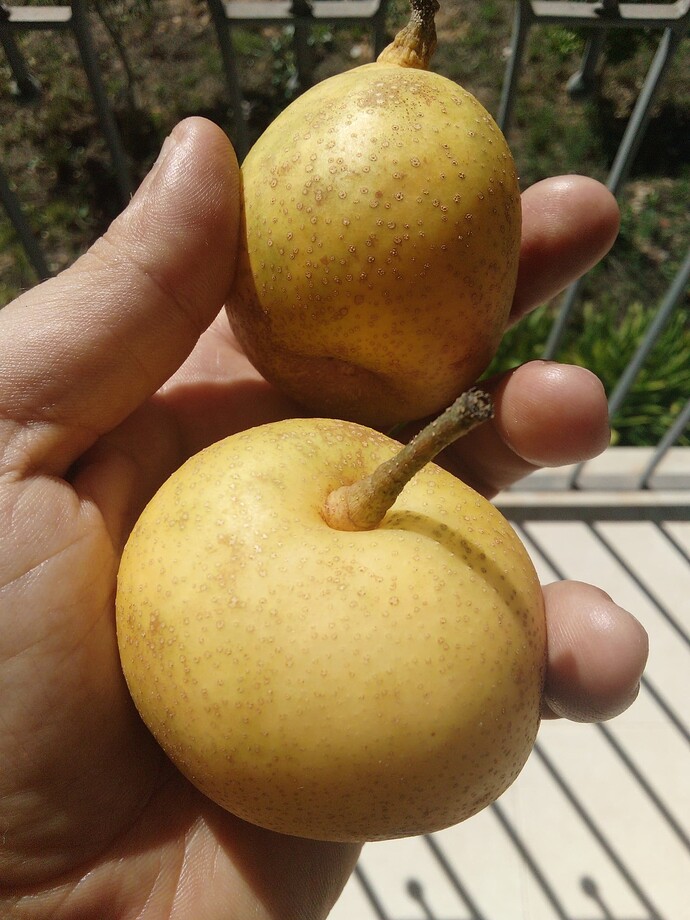 I’m glad you mentioned Raja. I grafted some of that, after hearing rave reviews from Fruitwood Nursery. I ordered several different Asian pear scions from them last spring. All took except for Tennesui. This is a stock photo of Raja. Some photos show a round pear. And others - more ‘pear’ shaped. I sure hope mine looks this good! I am still waiting for fruit from the last couple of years of grafts. 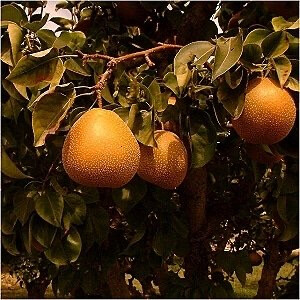 I would be more interested in the varieties you removed. My trees are all either last year or current year grafts so I won’t see fruit until next year.

Lets see… Shinko (lack of good flavor), Yoinashi (pretty good but not quite as good as others), Koyamo (bland), Shin-Li (watery but almost kept as it is much later so spreads out harvest), Sueri Li (odd skin bumps and odd flavor most years), Meigetsu (bland), plus a few others I can’t remember now and some seedlings that were no good.

I have these grafted so far.

Any comments on the flavor of your Shin li?

@pomegranny and I tried a niitaka pear yesterday and both came up with coconut or Pina colada taste. The most flavorful of those we tried.

Anyone has pics of Da Sui Li, your own pear, not pics from nurseries.

Often, nursery pics are copied from one another and when they are wrong, many are wrong.

Lost Da Sui Li graft but Pai Li is so good and crunchy honey sweet. I am loving it. 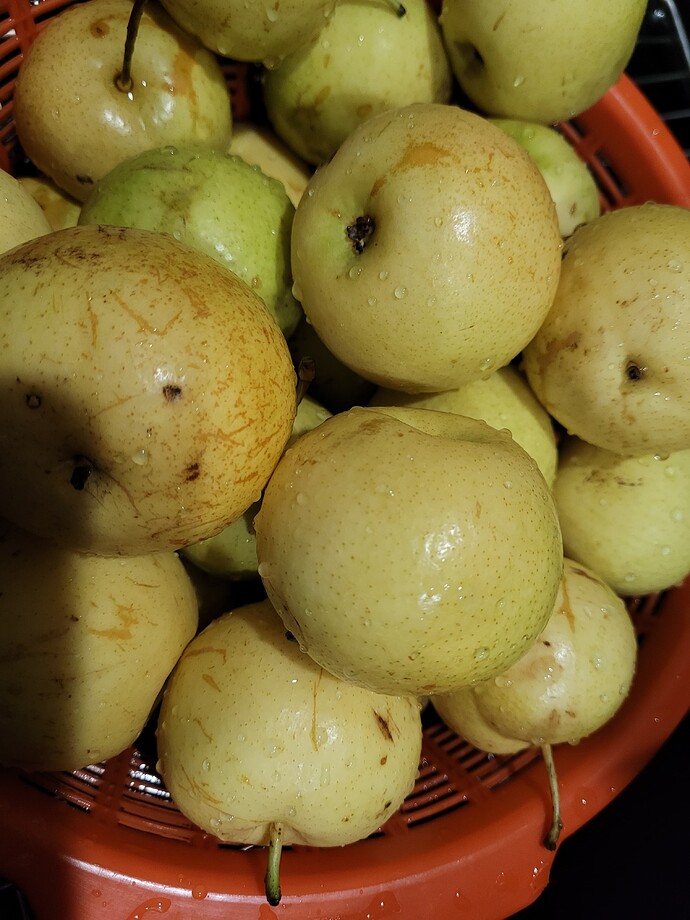 This should be Daisui Li - but, as deer ate my pop-can labels off the first year, it could be Shin Li or Tsu Li, as all were grafted at the same time, in the same row.
(Edit)And… while I thought I’d IDed it as Daisui Li several years ago… I’m leaning more toward Tsu Li, now…
Last fruits on the tree, and smaller than most. Stays green quite a long time, and peel has a rough, almost sandpapery feel. 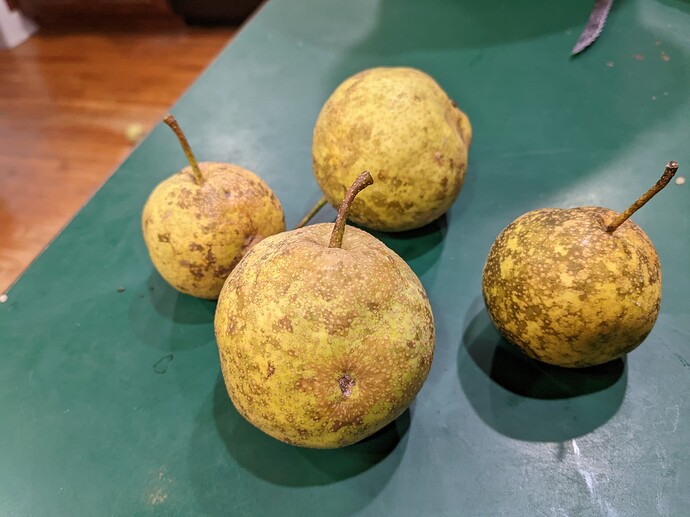 While I’m at it, I have this one branch in a multivariety tree producing these pears. Long ago like st the ID, but possibilities include Atago, Okolo, Yoinashi - just based on varieties that I remember sticking on there at one time or another. I’m leaning toward Atago…anyone care to opine? I don’t recall this fruiting before, but it’s bearing pretty heavily, and the pears are really sweet…reminded me, on first bite, of sugar cane I chewed as a kid. 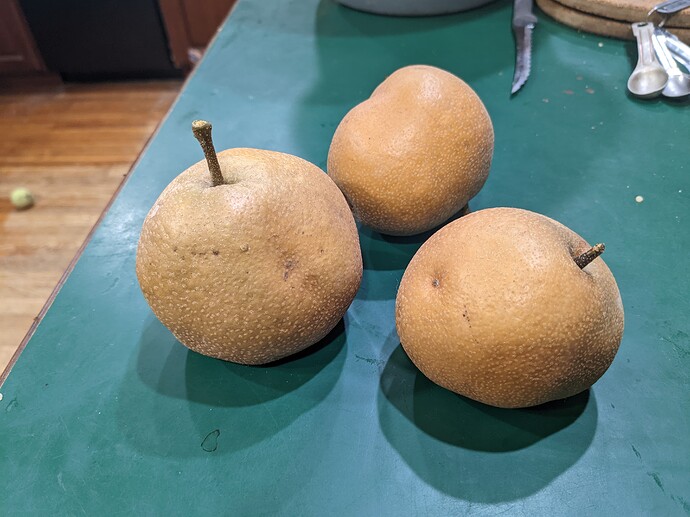 Yoinashi ripened in August in Somerset KY just after Bartlett.

I don’t have Atago, but it sure looks like the pics I’ve seen. What is the taste hitting on?

I have Dashiu li but I didn’t take pictures. It is not my favorite pear, nothing impressive about it. If I found any picture from last year. I will post it here

Tippy, I had to chop my Daisui Li tree this summer. It was heavily infected by fireblight. Its sister and neighbor, Shin Li, had 1 strike that dried up on its own on the other hand.

@Lucky_P , @IL847 and @PharmerDrewee ,
I don’t think my Dasui Li is the real McCoy. It is yellow with no hint of green or greenish. It is small, only 3 oz.

I wonder what it really is. 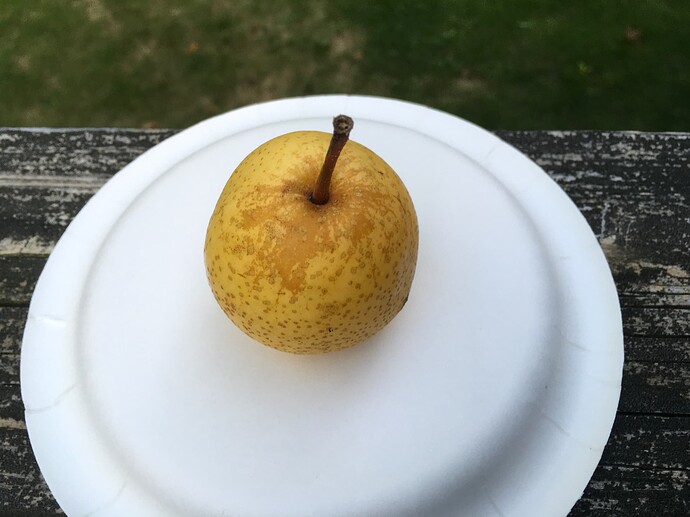 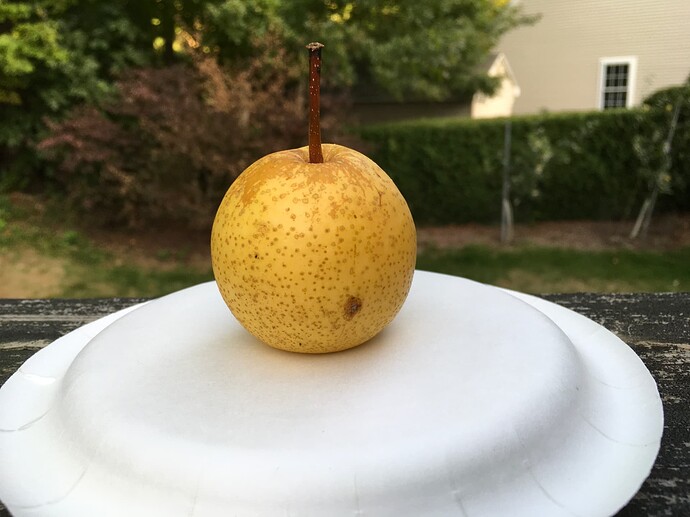 I have both 20th and Shinseiki. Their skin is thinner and smoother than this one .