The quest for Ube (dioscorea alata)

Sweet potatoes are a vining plant that spreads over an area about 7 feet wide. They are normally planted in-ground with spacing of about a foot between plants. They can easily be grown in a container by sticking a growing sprout into the soil and adding some water. They do NOT grow like potatoes which are in the solanum family. Here is a picture of a row of Okinawan purple sweet potatoes growing. 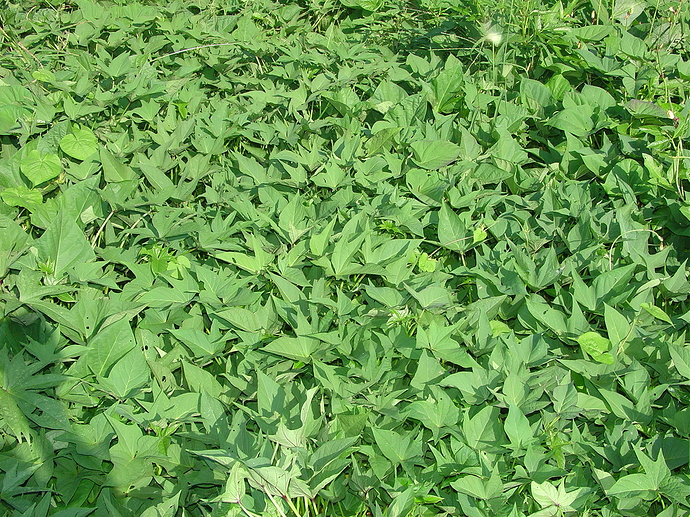 Red Skin Purple or While skin Purple? Need a care package? Can send you a box USPS flat rate. 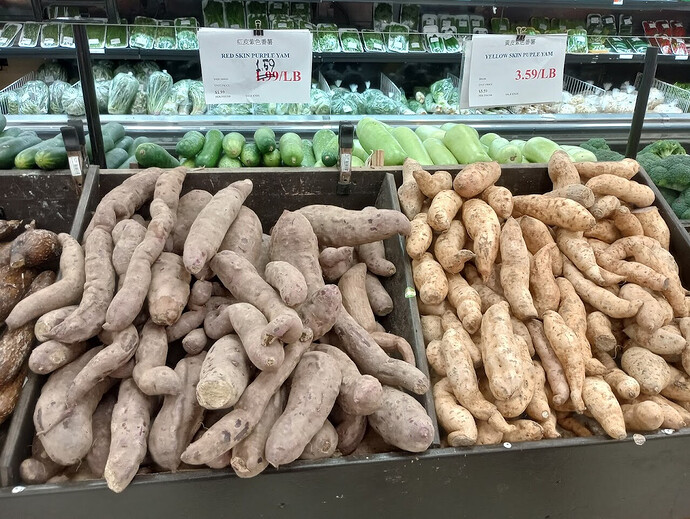 You are so kind, and I really appreciate the offer!!! But I think those are regular purple sweet potatoes or yams. They look too smooth to be ube. Ube is more rough and bumpy looking.

Thank you, again, though! I truly appreciate your going out of your way to check for me!

The yellow skin purple yams are excellent plain boiled with a firm texture similar to certain squash or chestnuts.

I think that Florida market swindled you (or they didn’t quite know what they were sending). Ube should be brown on the outside, but bright purple in the inside!

What does the dark night St Vincent taste like? Is it sort of glutinous and nutty and faintly vanilla-y? Maybe it’s the same thing as what I’m thinking of, but with a different name?

Got it in a trade from a person who got it at that market, and he referred to it as the market did. I’m not too disappointed, my main focus was bulbil-bearers (which it is), and I do have the other one. Both types are brown outside, with different shades of purple under-skin. The inner pulp is white on my so-called Ube, which probably means it’s not really an Ube, or maybe it’s a low-quality one.

DNSV is not particularly glutinous. Mushy perhaps, though not as watery as some alatas I’ve had. Nutty perhaps… Vanilla-y? Hmm… maybe if my tastebuds squint?

I usually eat all my yams mashed and buttered, so some subtleties might be missed except at first taste (and it’s been a long while since I had that first unseasoned taste). I think it would work in desserts, but despite the internal color, I doubt it’s synonymous with the true Ube.

How long does it take from planting to harvest? For example, if I planted in winter indoors in a 20 inch pot in front of a bright window, could I move it outdoors by a trellis in spring, and then harvest in the fall?

My yams usually start sprouting between March and May, and harvest time ranges between October (at the absolute earliest, usually it’s December) and February. They’re harvested once the vines die back, though they can be harvested from a green vine if need be.

Sometimes (particularly if using a cut “seed piece” off a tuber) the planted yam will sprout not long after planting. Often, though, it’ll just sit there in the soil, lying dormant until it’s good and ready to sprout. If you can get it to sprout in December, then that seems like a reasonable time frame to produce it. Bear in mind, the longer the season, the better the chances of it developing rich pigmentation. An early harvest might lead to a pale yam.

*Edit: Forgot to mention regarding the photos, the so-called Florida Ube is the reddish-skinned pale-pulped one on the left side of the clothes dryer; DNSV is the deep purple one on the right. And in the photo of the plate with an avocado in the background, that’s mashed DNSV on the plate, with mashed white alata and a touch of mashed Yautía in the right corner.

ic, at a different store I once found 3 different purple sweet potatoes. They all tasted good to me.

I’ve never bought plants off of ebay before, but I found this listing for ube plants:

What do you think? Does it seem legit? Who knows if it is “real” ube or not, but the picture of the root looks right at least. Does the vine look right? Would a 12"-16" plant grow harvestable tubers before November or so (when we usually have first frost here)?

Looks legit! I got my DNSV from eBay. It’s a great source, but you gotta develop a good eye for the real deal vs scams, and botanical names will get you further. I try not to buy from sellers with less than 98% rating, although I do look at the supposed reviews to see if it’s warranted.

From here to November you’ll probably get harvestable tubers, but between growing it in a pot and the likely need to prune back that first growth (as I had to do with my DNSV, which was mailed as a vine), setting back the growth, you may end up with pale / mostly white tubers. Don’t let that trouble you; my DNSV produced white the first year, deep purple afterwards.

Thanks so much! Fingers crossed I get something good!

Purple Sweet potato taste test. I steamed both on a low-medium 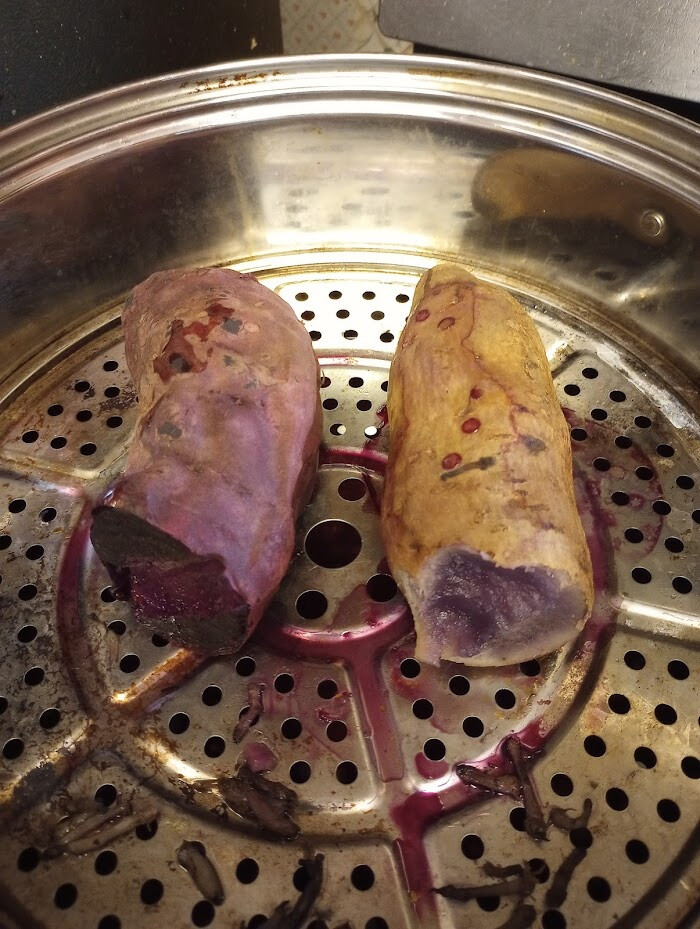 image700×929 208 KB
On the left it purple skinned purple fleshed. Tastes like a delicious sweet potato. Has the starchy sweet potato foundation and the flavor I can only call purple.

On the right white skin with purple core fading to white. Taste like candy. No starchy undertones at all.

I’m planning to get some “real” ube off ebay (we’ll see how it goes). But I’ll definitely try some of the other purple sweet potatoes the next time I go by the H-mart! Even if they’re not the same, they still sound really good.

when you say the white/purple one isn’t starchy, do you mean it’s sort of like jicama? (meaning, sort of crisp and sweet, and not fluffy like a normal starchy potato)

No, uhm,
The purple skinned purple/purple the best I can describe tastes a little like Taro, it has a little starchy flavor like a white potato or sweet potato that’s been boiled and not steamed or baked.

The white/purple is a lot smother not crunchy at all. You would think it was potato paste if you didnt see the skin still on it.

If I was making a desert I little sugar could help the purple/purple get from sweet root to confection but adding sugar to the white/purple would be like adding sugar to sugar.